The extremely versatile adidas Supernova Glide 8 Boost takes our vote for the best running shoe of 2016.

(Note: The article will be updated in case we come across a better shoe in later parts of 2016)

If there’s anything that answering over 7,000 reader questions and reviewing 300+ shoes in the last 8 years has taught us, it’s that everyone has their own version of running shoe perfection. Somebody might want a shoe to run a fast 5k, while others seek a shoe which can cruise through a full 26.2. Most want responsive cushioning, and a section of runners simply crave a supportive ride. Often times, it is all about the accommodating fit.

And all of this should be had at a reasonable sticker price, which in these inflationary times means anywhere between $90 to $130 for a current season model.

There are a lot of specialist shoes in the market today, doing one or two things really well. For example, the New Balance 1500 V2 is a shoe with a great fit and ride dynamics. It has enough pep to run a fast 5K and adequate cushioning to make a half-marathon comfortable.

The Nike Lunaracer 3 is superbly lightweight while feeling cushioned and fast. Do you want a versatile model with a very supportive ride? The adidas Supernova Sequence Boost 8 at your service, then.

But is there a shoe which does everything you ask of it, and more importantly, well enough?

A good analogy would be to compare a shoe with a car. Now if you wanted a fast car, there are many to choose from. 300 horsepower on tap, low drag coefficient, Turbo, uncomfortable tub seats, 8 years of monthly payments, the works. Live in a busy city and need a small peppy car to run errands? There’re plenty of hatchbacks on offer.

And yet, the Toyota Corolla continues to be the best selling car in the world. It blends comfort and power in good measure, and the engine reliability is legendary, humming like new even if your mileage is well into six figures.

In the running shoe world, the 2016 adidas Supernova Glide 8 Boost is the equivalent of a Toyota Corolla. Its ride isn’t exactly jaw-dropping responsive, nor is it the softest. The Glide’s genius lies in its ability to deliver everything in moderation; something which sounds easy to do in theory but extremely difficult to execute.

The Glide Boost hasn’t really changed much from the sixth version (2014), so we have enough collective history – based on both solereview’s ownership experience and feedback from hundreds of readers.

So what makes the Glide 8 Boost solereview’s top pick for 2016?

adidas Boost foam is the real deal, and the Glide 8 Boost has just the right amount of it. 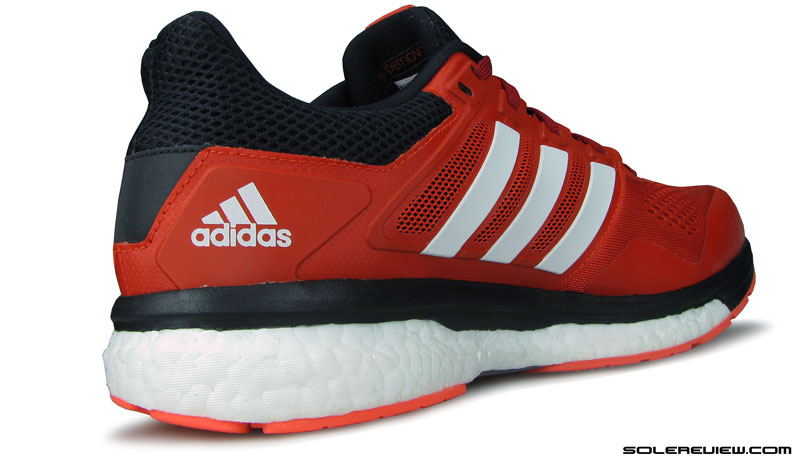 Not too much. Not too little. Just the right dose of Boost foam does the trick.

Introduced just a few years ago, adidas’s Boost midsole technology has quickly become the gold standard for responsive and durable cushioning. Formulated by the chemical company BASF, the midsole is formed by bonding thousands of expanded Polyurethane pellets. The benefits of this design? A springy and consistent ride regardless of the weather condition and mileage.

Unlike EVA (Ethylene Vinyl Acetate) foam and its variants, the Boost foam maintains its cushioning properties even in cold weather, where EVA foam will firm up. Polyurethane is more durable than EVA foam, so the midsole will outlive the shoe.

Where the Glide 8 Boost really shines is in its judicial use of this miracle foam compound. Unchecked use of this foam can actually turn a shoe unstable; the terrible Pure Boost was a great example. Go miserly with its use, and the shoe’s cushioning feel gets downgraded.

The Glide Boost’s midsole has just the right volume of foam, bringing out the best of Boost’s cushioning properties.

The Glide 8 Boost possesses a wide range of talents.

Sure, lightweight shoes such as the adios Boost 3 or the Boston 5 Boost will have an edge for a speedy 5K to a marathon, but what if one just wanted a single shoe to do it all, be it a leisurely 3k run or an arduous full marathon?

The Glide Boost proves its mettle under a vast range of circumstances, showing that it’s no slouch. Its relatively firm ride and smooth transitions makes it go fast enough for those 5-10K runs, and the Boost midsole packs enough cushioning for a full 26.2.

Its weight is respectable at 336 grams or 11.8 Oz too, making this a shoe for any occasion.

This is one tough outsole. 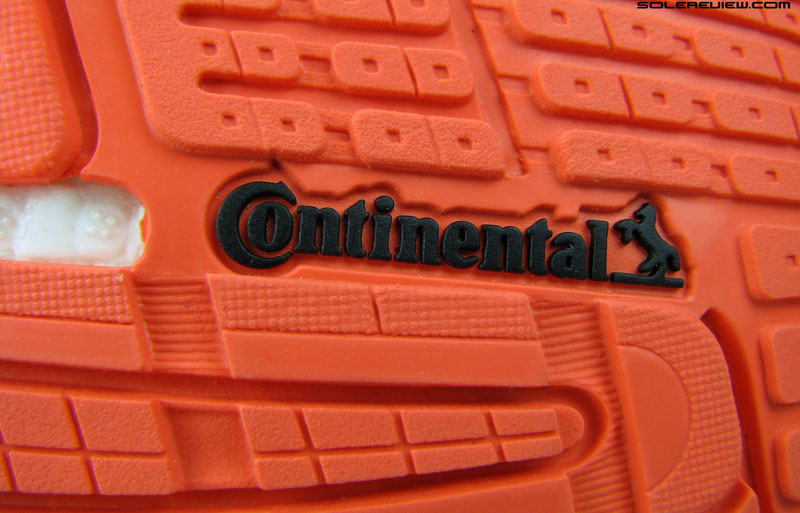 The Continental branding lives up to its name.

It is a striking coincidence (given the car analogy) that the shoe comes shod with a Continental branded rubber outsole. That’s right, the same company which makes car tires too. And the Continental stamped outsole lives up to its name. You can go hundred miles without as much a scratch on the rubber.

Many readers have reported mileage of 1,000+ miles, with a lot of life still left in the Glide. This model has by far the most durable outsole within the current crop of running shoes.

The icing on the cake is that the outsole grips very well even when used in damp weather.

The Glide 8 Boost has a supportive ride quality. 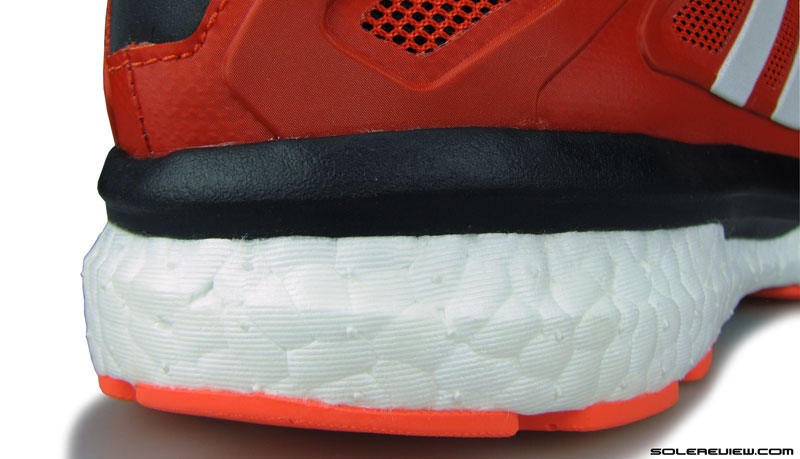 The upper EVA rim (black) is what keeps the Boost foam (white) from going astray.

By using a much firmer EVA rim over the Boost foam, the shoe keeps the foot centered. The height of the Boost foam isn’t as high as in models such as the Ultra or Energy Boost, so that helps too.

This makes the GB8 one of the best supportive/stable shoes within the neutral cushioning category.

The upper fits and feels great. 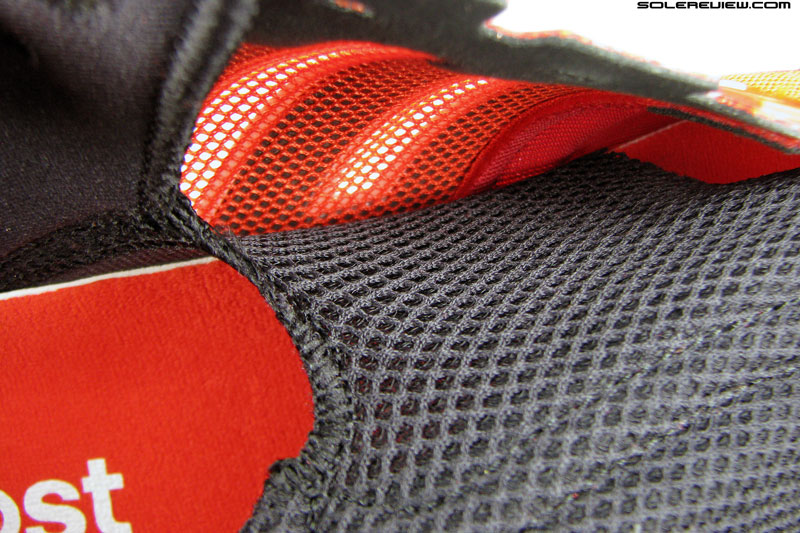 A wide gusset ensures that the shoe fits well, with no tongue slide. 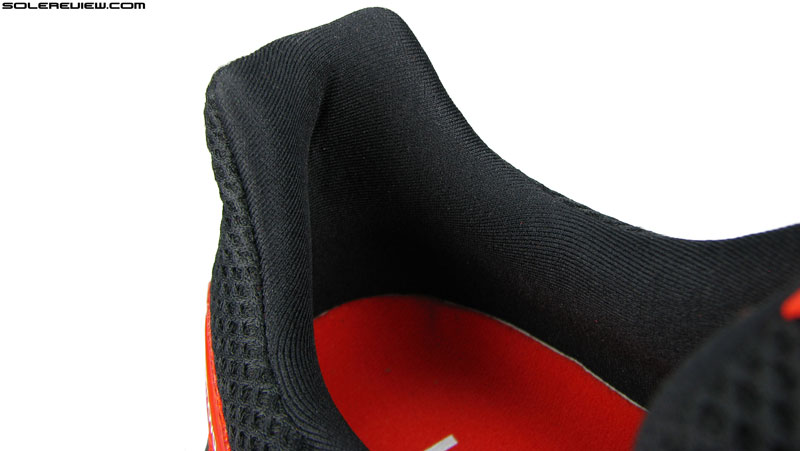 Borrowed from the Ultra Boost, the raised lip makes the heel easier to slip into. The lining material change makes it more comfortable too.

Even in its previous avatars of version 6 and 7, the Glide Boost fit well. This year, the GB8 does it better with a few improvement areas. The tongue and collar lining is smoother, and the extended heel lip is a trickle-down from the more expensive Ultra Boost. This betters the quality of heel fit.

The Glide Boost also does not have the dreaded plastic cage seen on the Energy Boost, and instead uses a synthetic leather panel for increased comfort.

It has other useful stuff 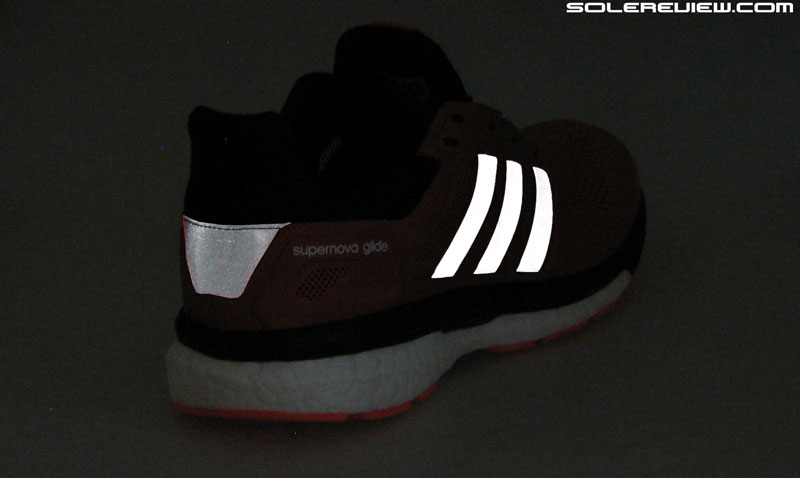 There’s plenty of reflectivity to go around… 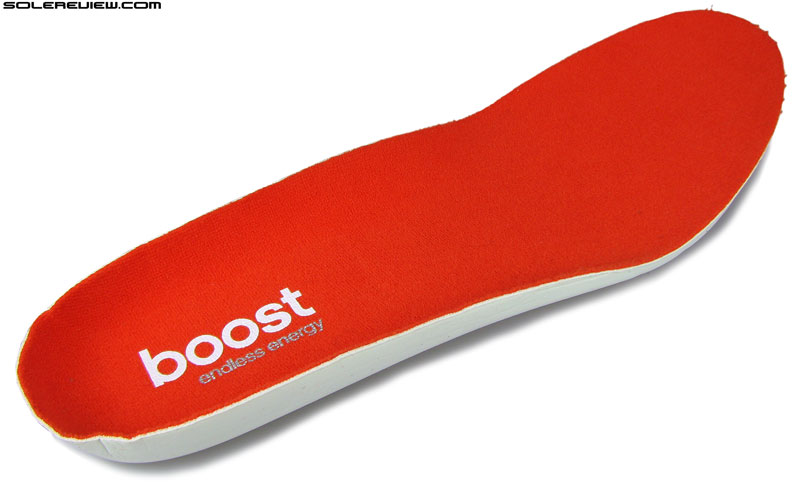 The stock insole is made of chunky and molded foam. Don’t like it? Chuck it, and there’s still enough room left for an aftermarket Superfeet.

The Glide has ample heel and side reflectivity. It also has a removable and comfortable insole which is thick enough to be substituted by an aftermarket insole like a pair of Superfeet, if need be.

It doesn’t break the bank

A MSRP of $130 is what you’re expected to pay for a decent running shoe anyway. The Glide 8 happens to be better value.

Its MSRP might not make it the cheapest shoe around, but given the value it packs, the Glide 8 Boost is money well spent. And what if you wanted a better deal? The Glide 8 Boost is still new, so don’t expect cut-price deals – yet.

Instead, consider buying the previous versions of the Glide, like the V6 and V7. Both of them are built on the same tried and tested midsole platform which the GB 8 has, and the upper is similar in many ways.