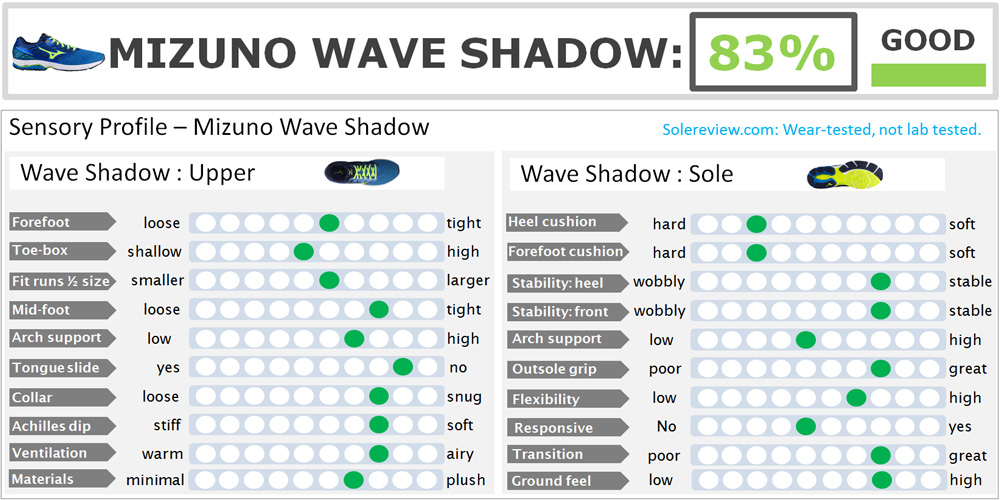 Mizuno’s marketing pitch: Say goodbye to your shadow. A soft, but light and snappy ride.

The Mizuno Sayonara had a brief four-year run. The first two versions lived up to the brand’s promise as a lightweight trainer for fast-paced training. The Sayonara 2 for example, had a great fitting upper with a super grippy outsole.

A lot changed with the Sayonara 3. It transformed from a lithe running shoe to a flabby regular trainer, losing its ‘fast’ feel in the process. The Sayonara 4 happened to be an obligatory update with nothing new to show for it. In short, the Sayonara lost its edge after the excellent V2.

Enter the Wave Shadow. This new 2017 model is the replacement for the recently discontinued Sayonara series. In a way, this shoe marks a return to the original Sayonara.

The Shadow’s upper fits great, and the outsole design brings back the grippy feel for quick transitions and push-offs. Like the older Sayonara’s, the Shadow feels at home – be it the road and synthetic tracks.

So is the Shadow a reset for the outgoing Sayonara? Mostly, but with a few changes. First, the midsole gradient drops from 10 mm to 8 mm. Secondly, the upper gets an inner sleeve/gusset. This is new for Mizuno; most of their shoes have historically lacked a tongue gusset.

Not that tongue slide was ever an issue for Mizuno running shoes considering the unique wide-flap design. However, a sleeve introduces a different fit dimension to the Shadow. 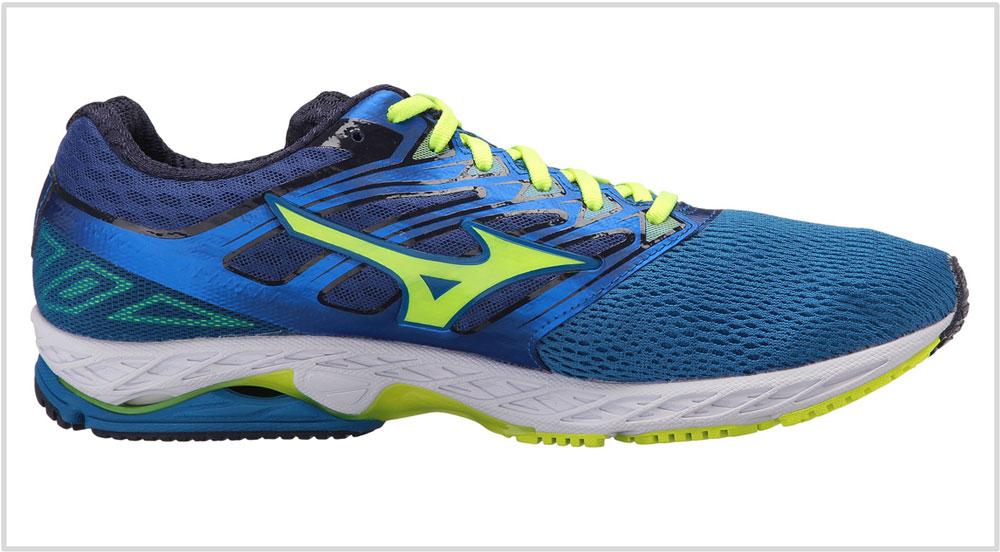 The Shadow gets rid of the external toe-bumper and forefoot overlays. Instead, the entire forefoot is constructed using a breathable spacer mesh. Under the toe-box, an internal stiffener gives structure to the front. This design reminds us of the Nike Streak 5, though the fit quality of both shoes are very different.

The forefoot mesh also forms most of the tongue. The insides have a partial sleeve which is attached to the tongue. We haven’t come across a Mizuno shoe with an inner sleeve before. This is a good move, as the gusset makes the interiors smoother. 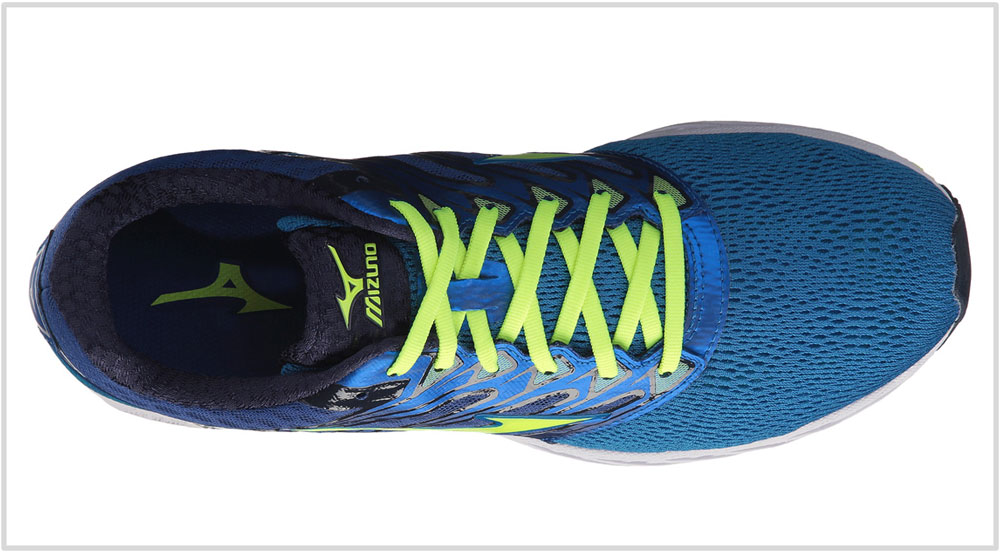 Outside, the midfoot is reinforced with synthetic. The Mizuno logos are fused instead of stitched, thus preventing inner stitch lines. The heel and tongue lining use a soft fabric, and both areas have lightweight foam padding. The rearfoot is supported with a hard internal heel counter.

The laces are flat and semi-elastic and are an improvement over the laces of older Sayonara’s. The older flat laces (S2 and earlier) did not have the semi-stretch and had the tendency to come undone during runs. 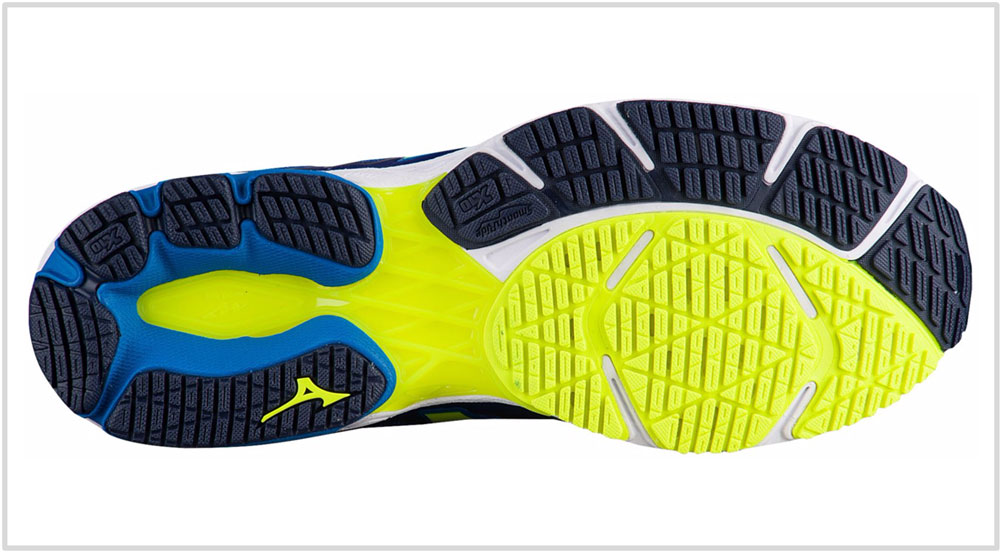 The upper gets several new features, but the sole is very much a Mizuno. A stiff Wave plate is sandwiched between two different foam densities under the rearfoot. This plate also forms the midfoot shank.

Like the past models, the Wave plate has a gentle curve on the outer side and a stiffer design on the medial side. This makes the outer side slightly easier to compress while making the inner side more supportive.

The outsole layout looks familiar, but there’s an important change. Usually, the hard X-10 rubber is restricted to the rearfoot. The forefoot now features a hybrid rubber construction which utilizes a softer blown rubber compound along with the X-10.

The X-10 rubber is placed on the outer forefoot side for durability, whereas the inner outsole has soft rubber for better grip. The small lugs grip extremely well. While these nubs don’t provide the same traction benefits as the DSP used on the first two Sayonaras, they get the job done.

DSP is expensive, and that’s the reason why more brands are replacing this with plain rubber. The Sayonara was one example, another is the adidas adios Boost which ditched the DSP platform.

Among other things, the midsole sidewalls have a lattice-shaped molding. Besides the aesthetic effect, these grooves help with midsole compression. The Shadow also has an 8 mm heel to toe drop which is 2 mm lower than the Sayonara.

The insides feature a removable blown foam midsole with a super plush top cloth. The lasting is also made of foam; the Sayonara used to have a fabric backed lasting with minimal foam. 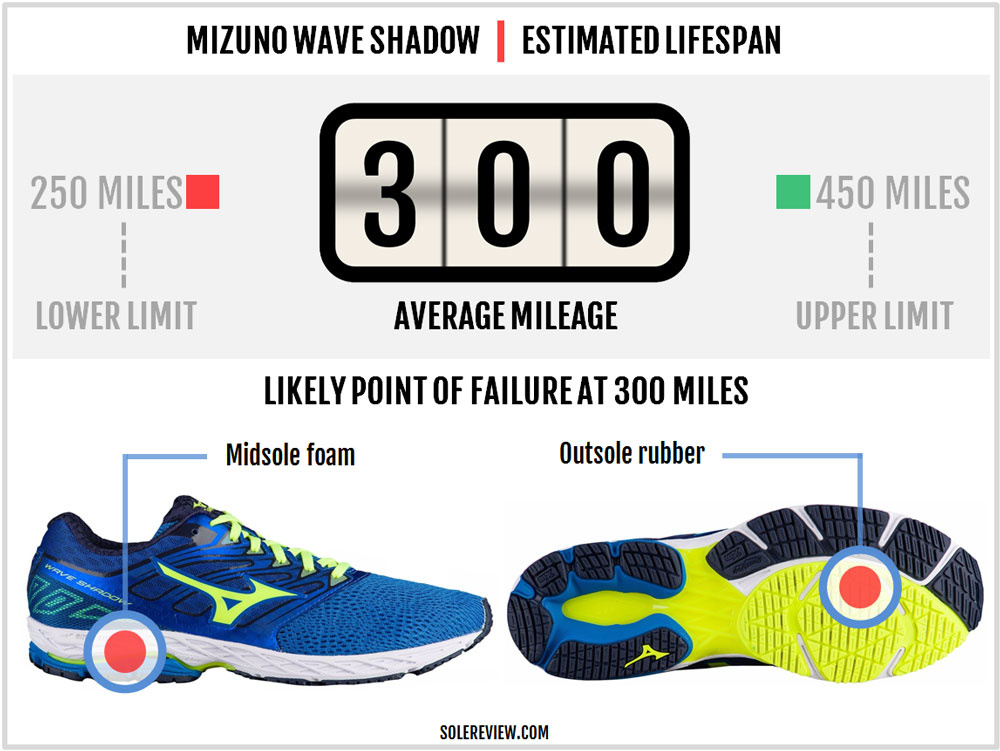 Speaking of durability, the midsole foam is the only component you need to worry about. Mizuno foams have the tendency to flatten or pack after a hundred miles or so.

Here’s an old picture of the Sayonara 2 with just 50 miles on it. Notice the deep creases on the foam section:

This is what Mizuno loyalists call ‘breaking’ in. The foam tends to pack especially under the heel where the outsole is mounted over foam pods.

This makes most Mizuno run ‘flatter’ at mile 100 than Mile 10. Otherwise, the outsole is fairly durable, and so is the upper. 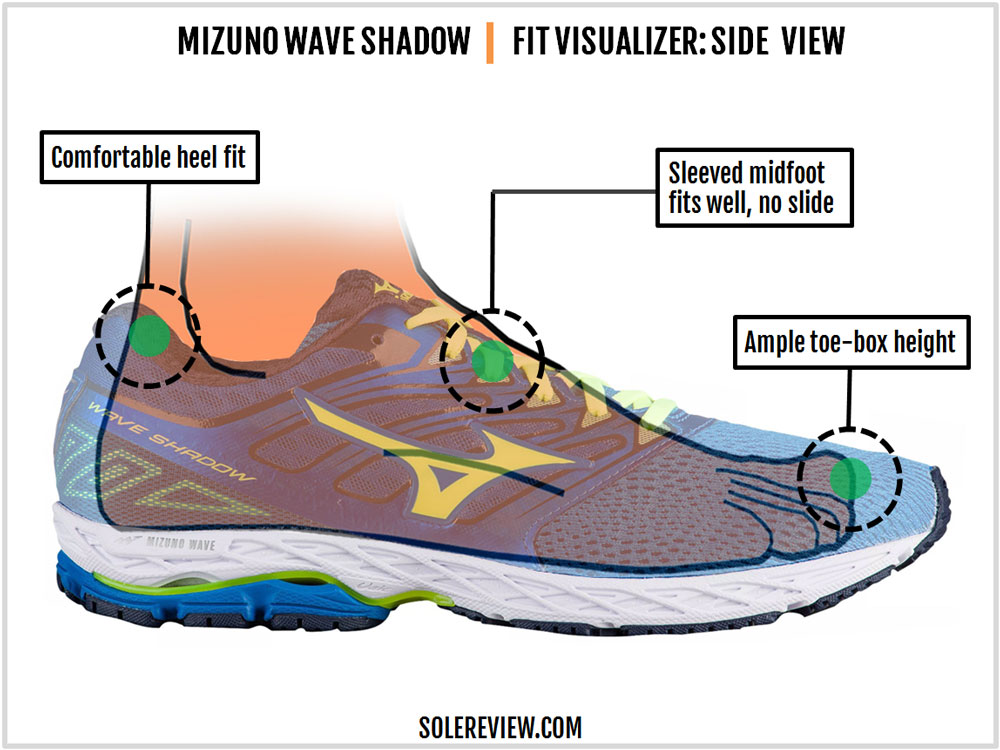 The highlight of the Shadow’s upper fit is the inner sleeve. Traditionally, Mizuno has avoided using a gusset, so the Shadow fits differently than most of the Mizunos so far. The midfoot has a smooth fit, and the sleeve also fills the gap between either side of the midfoot.

The tongue is thinly padded, but the soft semi-elastic laces do a good job of spreading pressure evenly. The heel has a firm grip and is made comfortable by the soft lining and the foam padding. 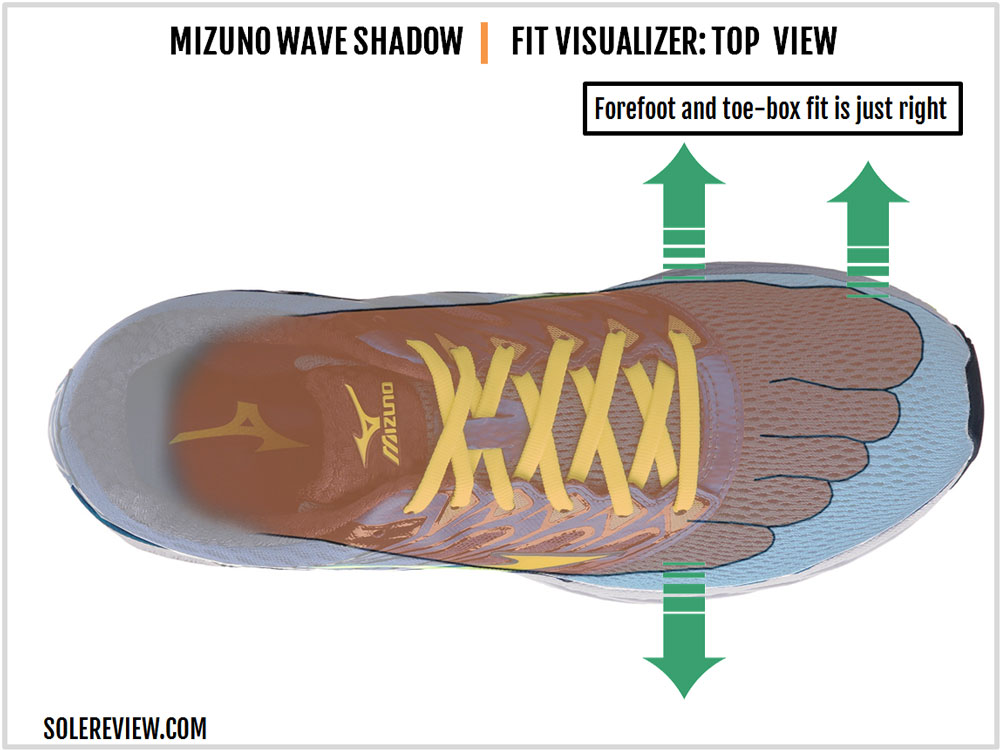 In the front, the toe-box fits just right, and the length is true to size. There’s enough room above and on the sides; the mesh feels comfortable too. In a way, the mesh feel reminds us of the Nike Streak 5. Except that in Shadow’s case the fit is more accommodating. The mesh also allows plenty of air to circulate through.

We’d like to give you a heads-up on the internal toe-box reinforcement. Like many Mizuno models, there’s a crinkly reinforcement fabric under the toe-box. This isn’t a comfort issue per se, but will be initially noticed by first-time Mizuno buyers. 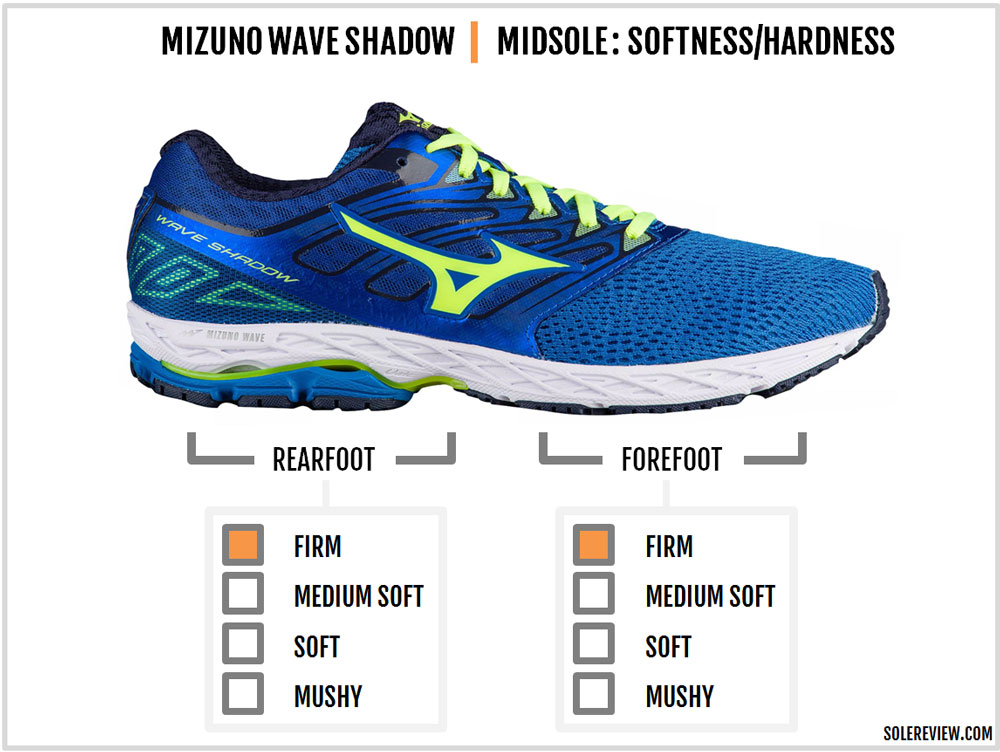 The Shadow doesn’t have the firm feel of the first two Sayonaras. The removable insole is a blown foam kind, and there’s a foam lasting below it.

These two elements contribute to the softness in the upper parts of the midsole. The latticed grooves molded into the midsole compress upon weight loading. This also adds to the cushioning experience.

So it is safe to say that the Shadow has ample cushioning up to run distances of a half-marathon. Any longer, and you might want to consider the more cushioned Wave Rider.

On the other hand, the Sayonara 1 and 2 had a snappier compression molded insole and a fabric lasting.

Despite the superficial softness, the Shadow performs well as a fast trainer. The Wave plate extension from the heel to the midfoot not only adds firmness but helps with stability and efficient transitions too.

The tiny forefoot outsole lugs provide excellent grips for push-offs, and this is one of the reasons why the Shadow feels at home on tracks. Also, the forefoot isn’t overly flexible, and that adds to the quick feel of the Shadow. 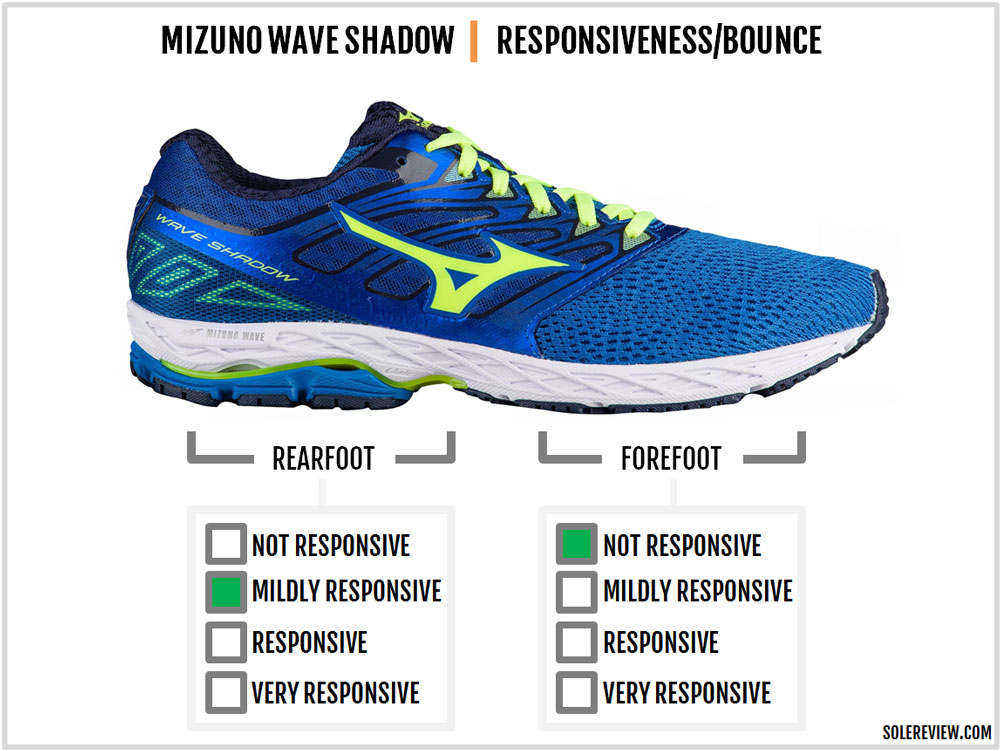 Being responsive isn’t Mizuno’s forte; rather, ground feel is. There is some springback provided by the combination of the Wave plate and the cavity under the heel, but these do not amount to much. What you get is a better connection with the ground helped by the midsole’s firm riding manners.

As called out in the durability assessment section, the Mizuno midsole ‘breaks-in’ after 100 miles or so. The foam packs to a certain extent, and there’s a loss of cushioning softness experienced in the initial stages of ownership. 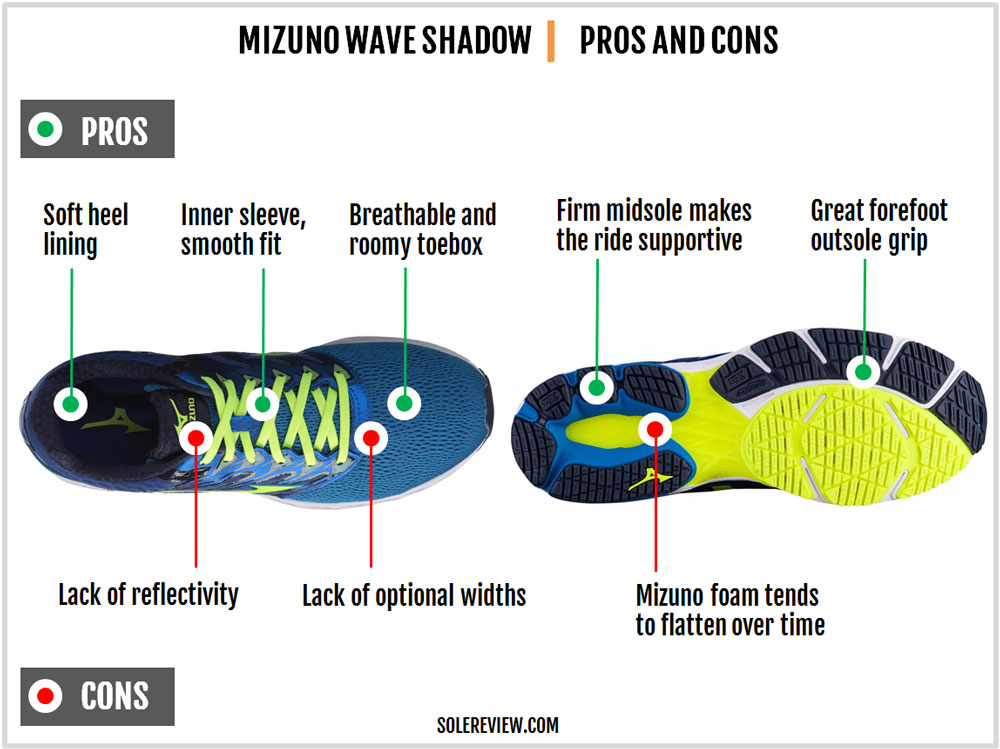 The Shadow has a comfortable upper which fits and breathes well. The lining materials used are comfortable, and the new sleeved tongue makes the interiors smooth.

Except for the gradual loss in foam cushioning, the midsole ride delivers what it promises. The firmness helps aid stability and swift transitions, and the forefoot has great grip for efficient push-offs.

It would have been nice to have additional widths and some reflectivity on the Shadow.

SUMMARY, AND COMPARING THE SHADOW WITH THE SAYONARA

So is the Shadow a true Sayonara replacement? Mostly. In fact, the Shadow’s new upper is an improvement over the past two Sayonara’s stitched overlay mess.

The redesigned outsole offers better grip and durability. The smaller lugs deliver superior traction over the Sayo 3 and 4’s design, and the X-10 rubber helps increase the forefoot outsole’s lifespan.

All in all, the Shadow is true to its marketed promise. It is a comfortable lightweight neutral which performs the role of a fast-trainer very well. It also works great as a track training tool. 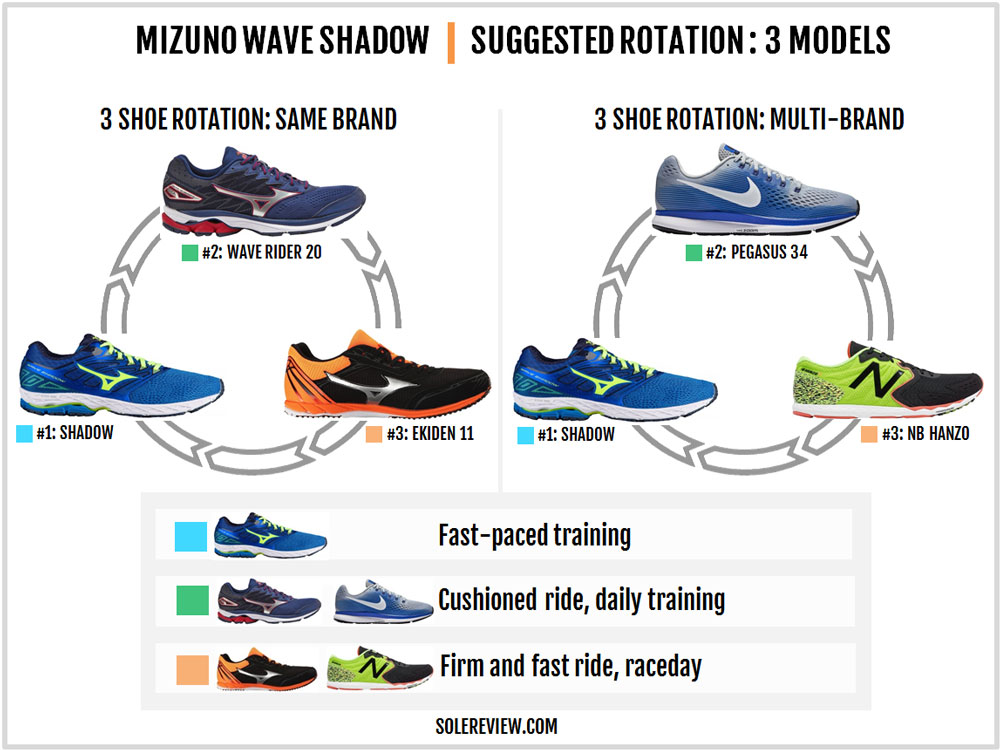 The Wave Rider 20 is a no-brainer as a daily running alternative. It has a thicker midsole than the Shadow, hence making it more comfortable for longer runs.

The Hitogami is too close to the Shadow. So we recommend the Ekiden 11 as a raceday shoe instead. You can use the racing flat for 5k and 10k races and reserve the Shadow for half marathons.

The New Balance Hanzo is the Ekiden equivalent – flat, super lightweight, and an upper which fits and feels great. And if you need a cushioned daily trainer which isn’t a Mizuno, look no further than the Nike Pegasus 34. 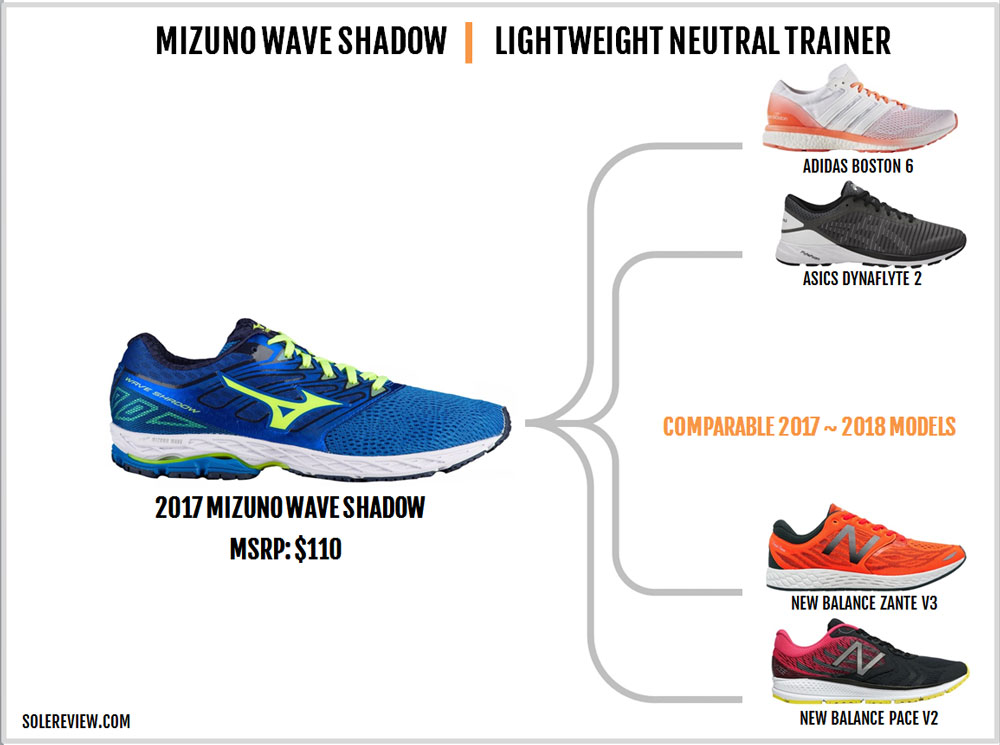 The Shadow is a relatively firm shoe, so the closest competitive equivalent would be the New Balance Vazee Pace V2. The Pace is slightly firmer and narrower fitting than the Mizuno but serves the same purpose. The Asics Dynaflyte 2 comes a close second with a lightweight and softer ride.

Both the adidas Boston 6 and New Balance Fresh Foam Zante are lightweight neutrals meant for fast training. They are softer than the Shadow, Pace, and the Dynaflyte, so take your pick.