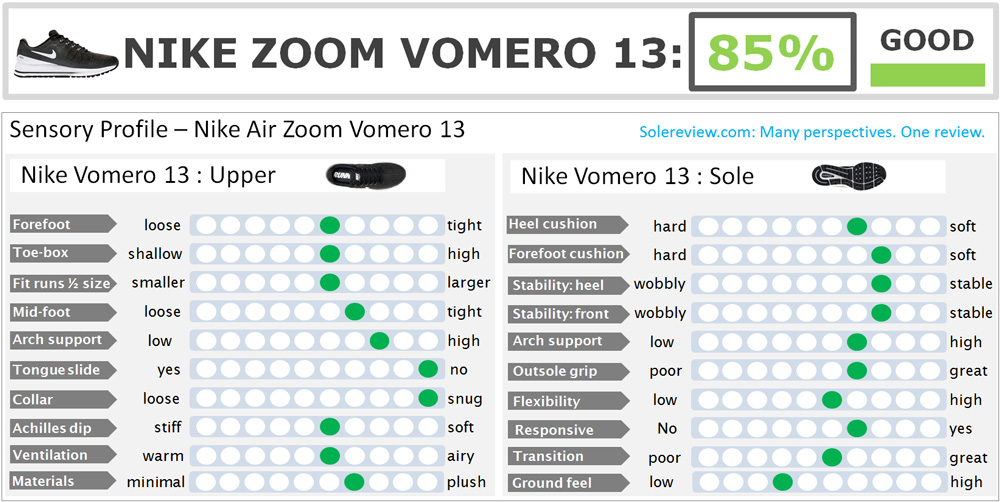 Nike’s premium neutral cushioned trainer gets a minor upper redesign. The rest of the Vomero 13 is the same as the 12.
Cushioned and responsive ride, secure upper fit
Rigid forefoot, not enough differentiation between the Vomero and the Pegasus 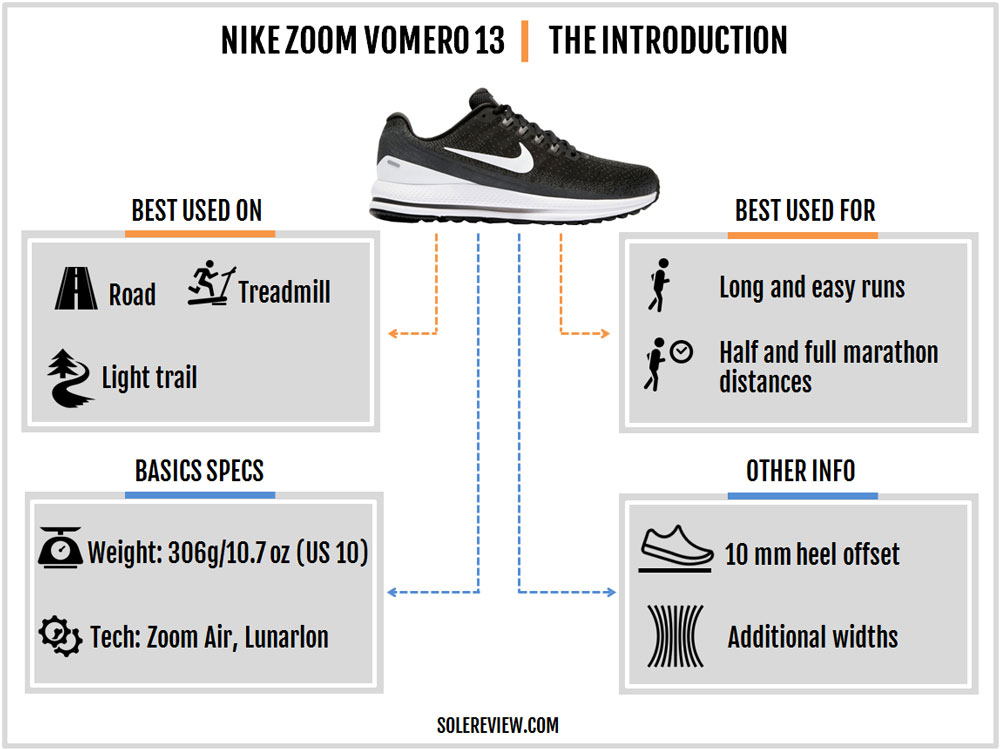 The running footwear industry is cyclic in nature. Last year, it was adidas looking fresh and Nike looking stale. 2018 seems to be the year when the incumbent (Nike) makes a grand comeback.

The early signs are all around us. Consider the Vaporfly 4%. It’s a shoe which we wanted to buy for our review, but the nicer colors are selling out within hours, not days. The Zoom Fly also proved to be a commercial success.

2018 is also the year of the highly anticipated Pegasus Turbo, React foam-based shoes and an overhaul of Nike’s running line from a design viewpoint.

Brands are realizing that automation in footwear manufacturing is a double-edged sword. On one hand, reducing the number of processes involved in making a running shoe results in a cleaner design. On the flip side, the same toned-down aesthetic is leading to a design fatigue.

For example, Nike’s ‘Flymesh’ upper design looks the same regardless of whether it’s a Structure, Vomero, or the Odyssey. The adidas Ultra Boost hasn’t changed in over three years. For the average consumer, the Pegasus and the Vomero look confusingly similar.

To remedy this, the Vomero 13’s upper introduces fused synthetic side panels. This helps the Vomero visually differentiate itself from the rest of the Flymesh pack.

These updates are more form than function, however. The Vomero 13 has a nearly identical upper fit and ride quality as the Vomero 12.

SOLE DESIGN AND THE RIDE EXPERIENCE 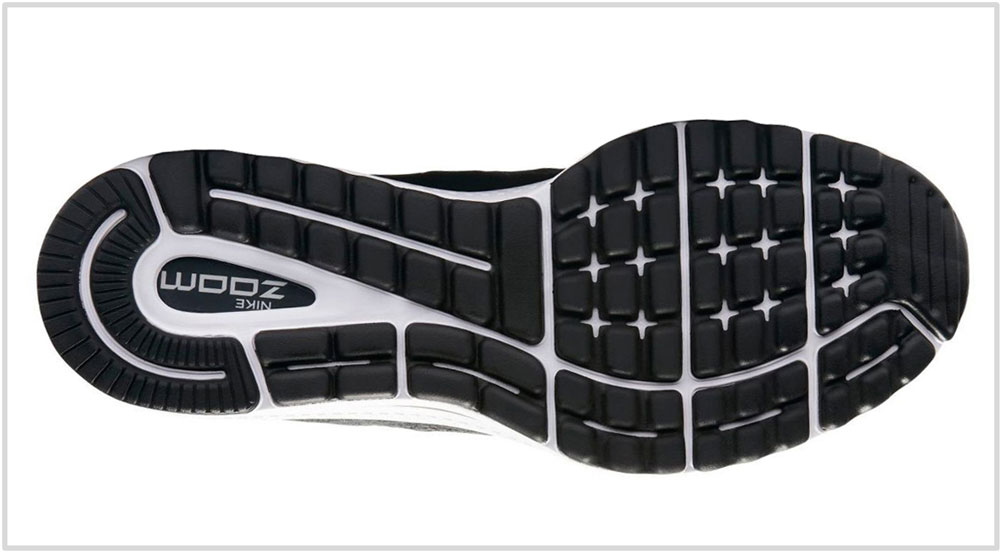 The Vomero 13 carries over the midsole and the outsole from the 12. At the very top is a removable insole made of blown foam which looks like Ortholite but it isn’t. The outer midsole is made of soft, single-density EVA foam which Nike calls Cushlon.

Some Vomero colors have their midsoles painted in a dual-tone scheme. This might lead you to believe that the outer midsole is dual-density. It isn’t.

The dual-density business happens inside the midsole, where there’s a Lunarlon layer over a couple of Zoom Air bags. There’s a large Zoom Air bag under the heel, and the second one is located under the forefoot.

The Zoom Air bags are placed closer to the ground, so a TPU sheet is added as a protective barrier under the heel. This is what you see when you flip the Vomero on its outsole. The outsole is blown rubber except for the heel crash pad which is made of hard Carbon rubber. 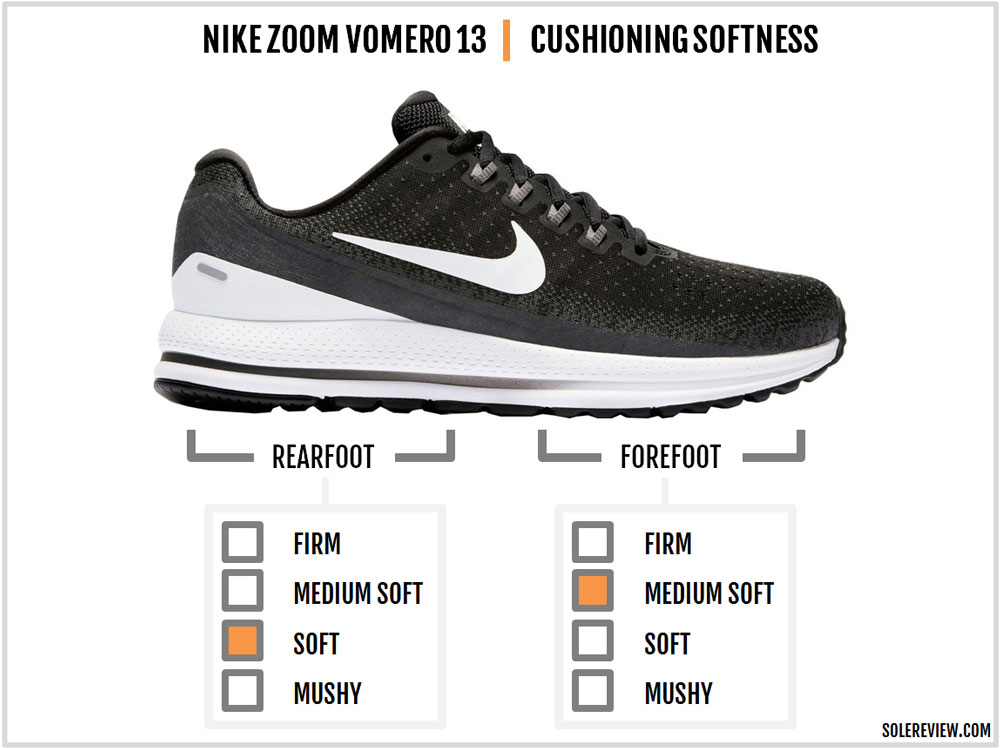 As both the Vomero 12 and the 13 share an identical sole platform, the ride character remains unchanged. The Vomero 13’s ride is an optimal mix of cushioning softness and responsive springback.

The outer midsole is made of single-density EVA which is soft but isn’t mushy. The removable insole and the Lunarlon create a soft layer over the tightly sprung Zoom Air bags. The Lunarlon layer also helps deliver consistent cushioning.

In some (earlier) versions of the Vomero, the Zoom Air bags were felt as independent units. With the Lunarlon embed, the cushioning feels smoother during transitions.

The outsole influences the cushioning too. The soft blown rubber outsole creates a padded sensation at the point of impact. The downside is that a soft outsole makes the forefoot feels slightly less snappy when compared to models such as the Pegasus 34.

Despite the flex grooves, the forefoot is stiff due to the large Zoom Air unit. The Vomero 13, like the 12, flexes near the midfoot instead. 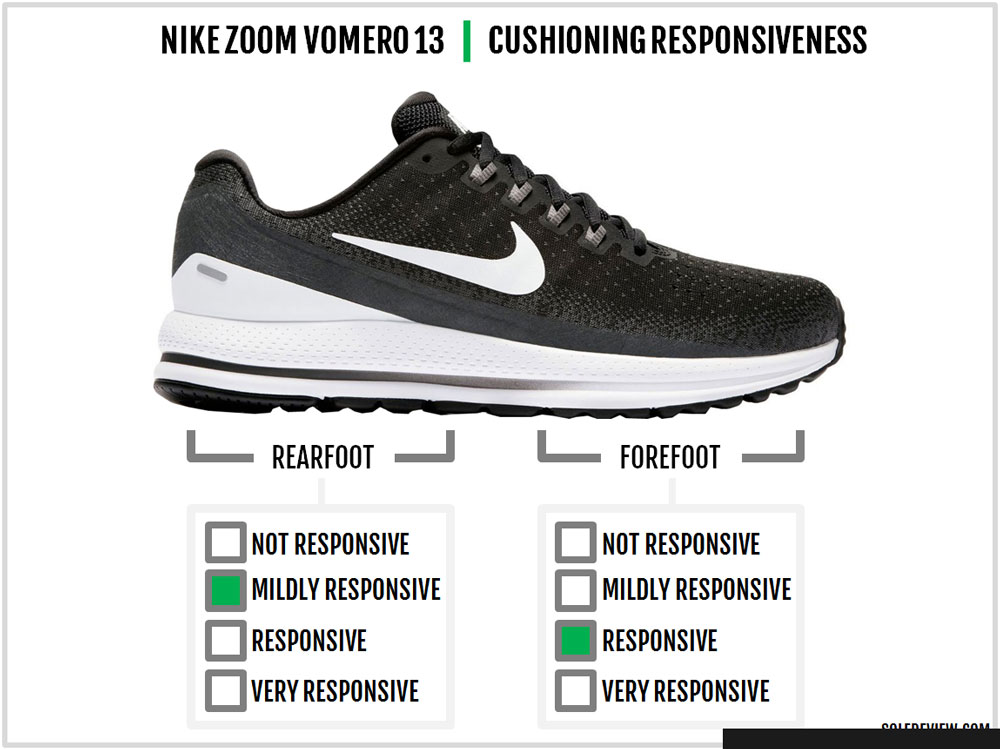 The rearfoot is more responsive than the front due to the TPU film below the Zoom Air bag. That, and the cavity which allows the heel to splay better.

The balanced midsole sidewalls and the under-heel cavity helps keep the ride centered and supportive. The Vomero has excellent compression management as the Zoom Air bags inside help avoid mushiness.

Daily training or the occasional long run like a half or a full marathon is the perfect use-case for the Vomero 13. 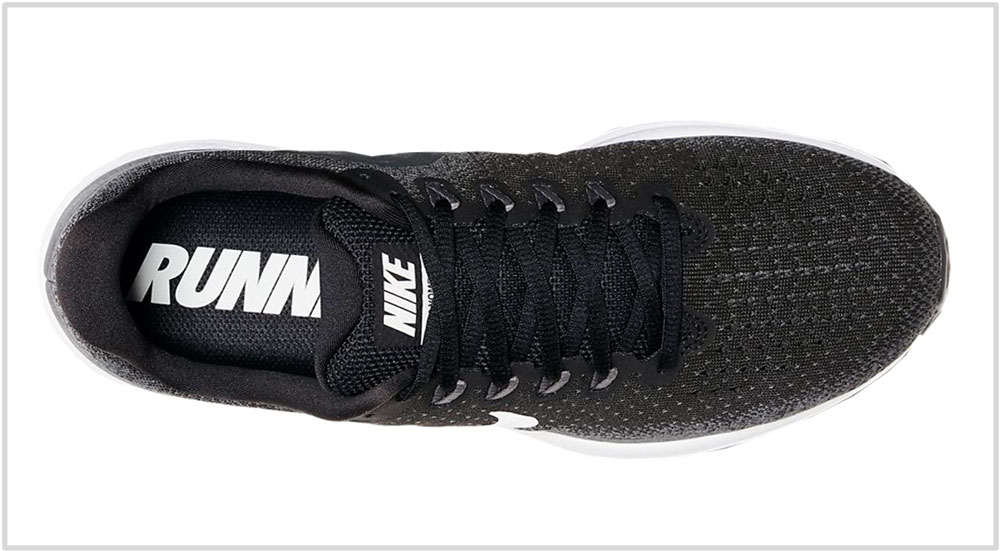 The Vomero 13 has a similar form factor to the 12 except for a couple of important updates. The Flywire lacing system now uses flat straps instead of the cord+strap combination of the 12. The first row of lacing doesn’t use Flywire at all and is instead hooked to a regular eyelet.

The outer engineered mesh is one-piece, and an inner sleeve is attached to the padded tongue in a bootie construction. The heel collar has plenty of padding with an internal counter for support. 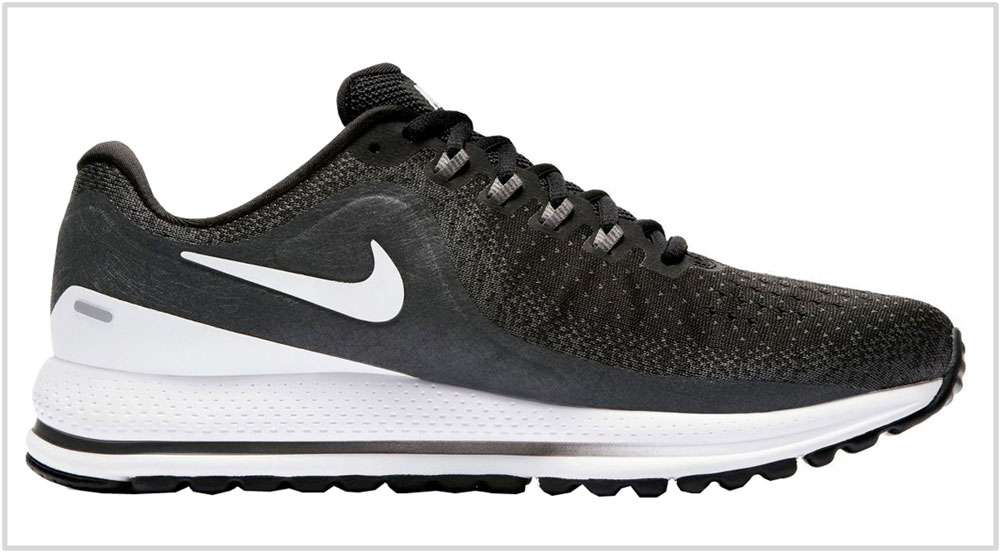 Another update is the addition of synthetic overlays. In an attempt to differentiate the Vomero from the $30 cheaper Pegasus, the upper now has decorative overlays. A thin synthetic layer with molded detailing covers the lower half of the Vomero’s upper.

A synthetic layer wraps around the heel. This also means the reflective ‘vents’ last seen on the Vomero 12 are now replaced with two tiny strips, thus reducing the amount of reflectivity available. 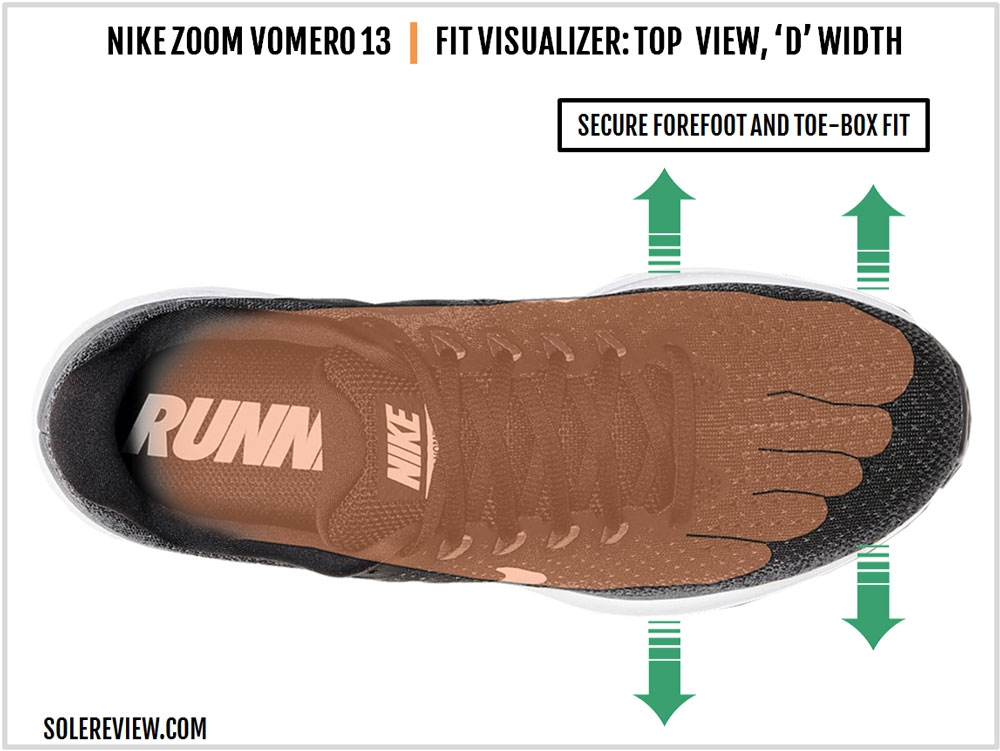 One would assume that the newly added overlays on the upper would affect the Vomero’s fit. As it turns out, not by much. There are a couple of reasons. The first row of lacing now doesn’t have Flywire, and this helps ease the forefoot fit.

The inner sleeve also separates the foot from the outer upper, so the synthetic overlays do not affect the midfoot fit at all. At best, the synthetic fusing is a visual enhancement which gives the Vomero a streamlined look.

The toe-box height is just right because of the internal toe-bumper creating dedicated room for the toes. The forefoot isn’t very relaxed, but it isn’t uncomfortably narrow either. 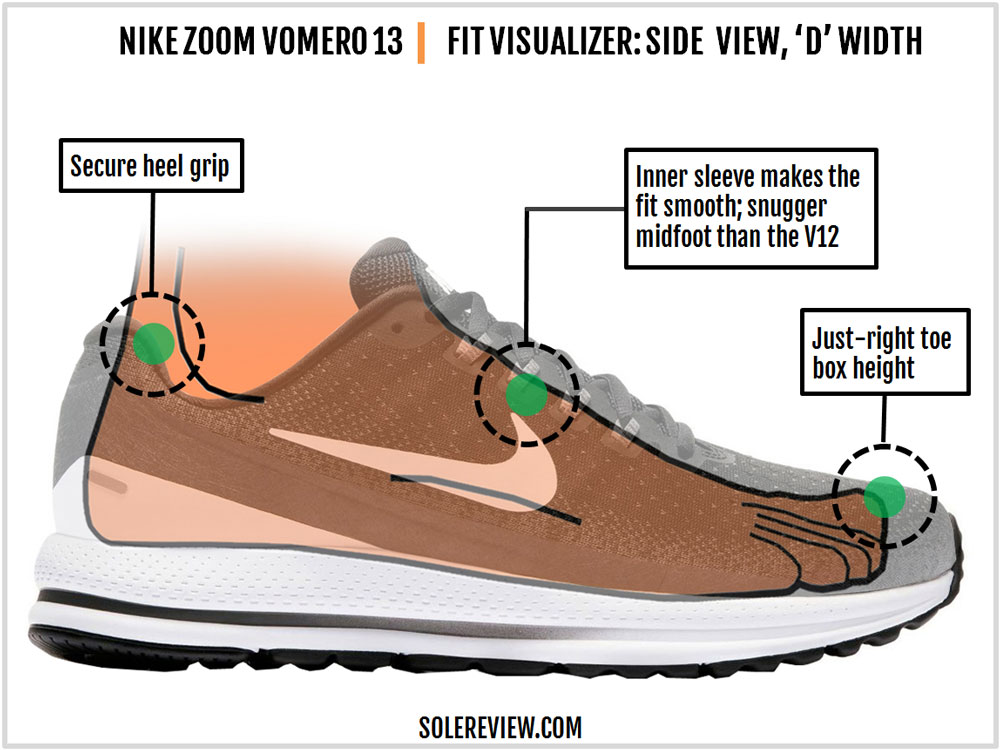 The midfoot fits better than the Vomero 12, as the flat Flywire and the inner sleeve combine to deliver a non-invasive fit experience. We were never a fan of the string-based Flywire, so the usage of 100% flat Flywire is a positive development.

In the back, the heel grip is plush and secure. Again, the external layering makes no difference on the collar fit. Most of the support comes from the molded heel counter which is the same as the Vomero 12. 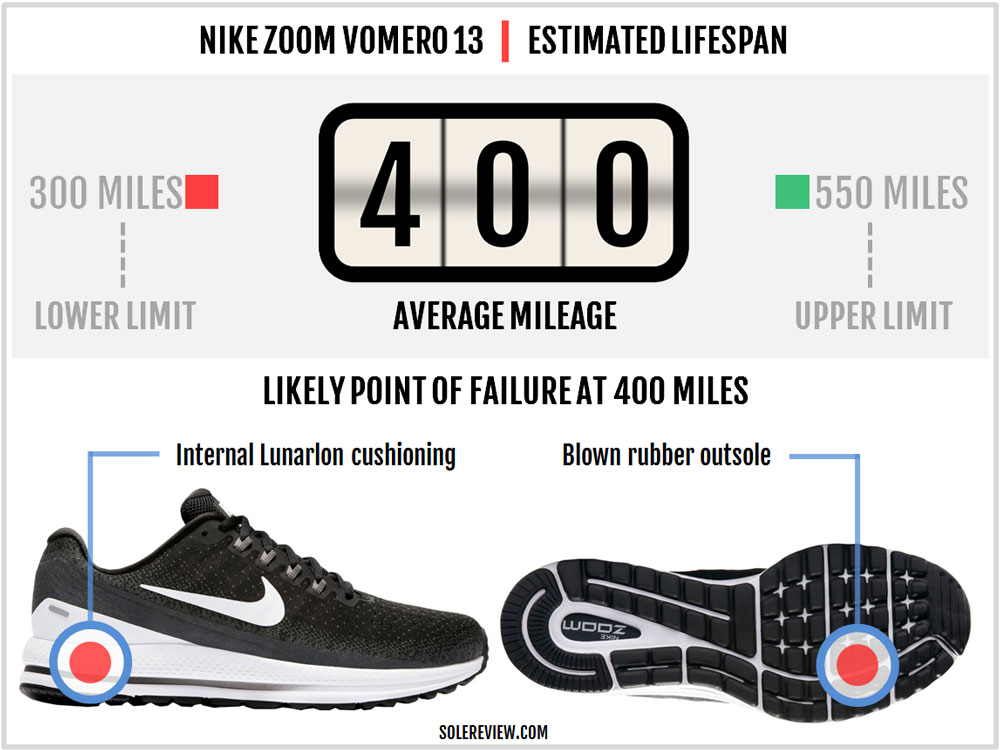 Based on our experience with the V12, the Vomero 13 will last around 400 miles. The new Vomero uses the same sole as the 12. While the outer casing is EVA, the internal Zoom Air bags minimizes midsole deformation. The layered upper is extremely durable.

The removable insole will flatten after 150 miles or so, and the Lunarlon embed will eventually lose its cushiness. The blown rubber outsole does go through some initial wear and tear under the forefoot, but it has proven to be durable. 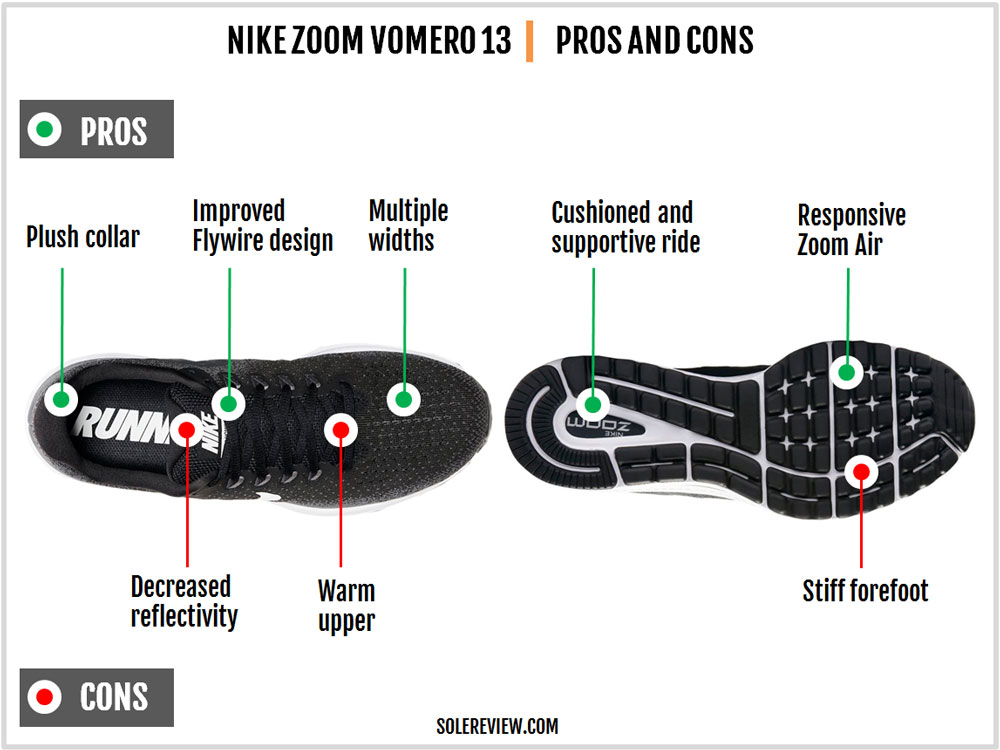 The Vomero scores in most areas. The upper fit is smooth and secure due to the combination of the inner sleeve and the foam-quilted tongue and heel. The Vomero 13 is also available in multiple widths.

There are some things you need to be mindful of. Due to the inner sleeve, the Vomero runs warmer than most running shoes in this category. The forefoot is also rigid due to the Zoom Air bag. Lastly, the Vomero 13 isn’t as reflective during low-visibility conditions as the Vomero 12 was. 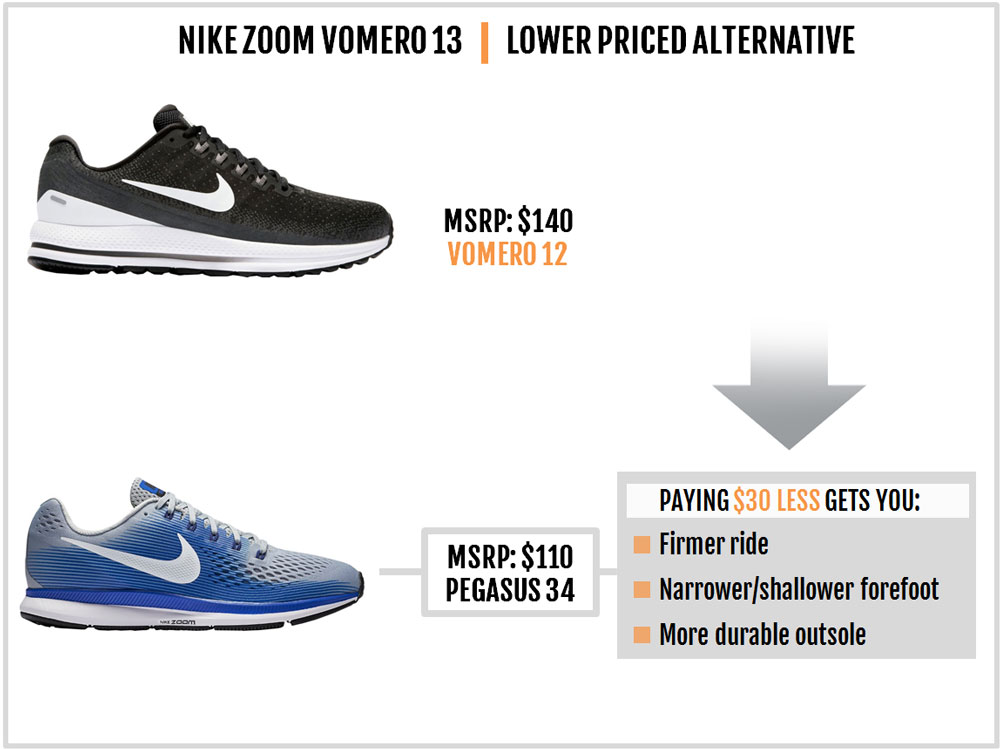 The feature gap between the Vomero and the less expensive Pegasus isn’t as wide as it used to be. This happened because the Pegasus recently switched to a dual Zoom Air bag set-up, the same as the Vomero.

That said, the Pegasus does a few things differently. It has a full-length outsole made of durable rubber and has a narrower upper. It also lacks the Lunarlon embed of the Vomero. Hence the ride quality is more business-like, a less plush version of the Vomero if you will.

The Pegasus is exceptional value at an MRSP of $110. So if you’re reluctant to spend the Vomero price, the Pegasus is the next best thing. 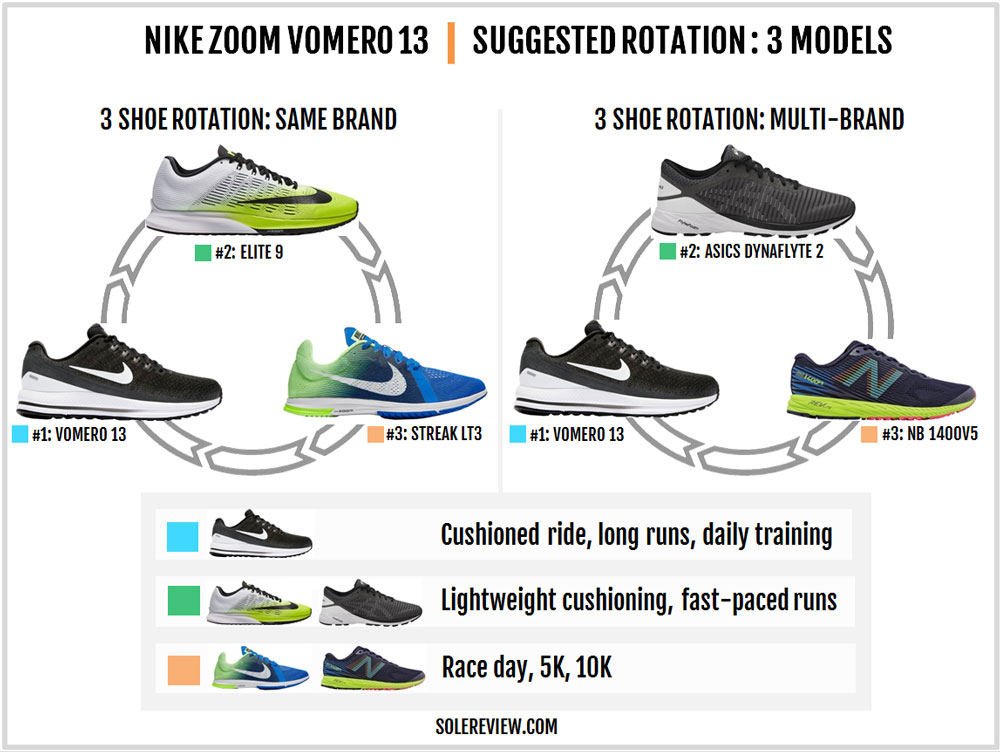 The Nike Lunaracer has been dropped, so we’ll tweak our rotational recommendation for 2018. The Nike Zoom Elite 9 is a firm and forefoot-responsive trainer which works best for fast-paced training. If a race-day shoe is what you’re after, either the Zoom Streak LT 3 or the Streak 6 will do for those 5K and 10K runs.

If you want to add brand variety to your running shoe rack, then the adidas Boston 6 or the Asics Dynaflyte 2 are excellent fast-run performers. Also, there are plenty of race-day shoes in the wild, but our pick is the New Balance 1400V5 or the adidas adizero adios 3. 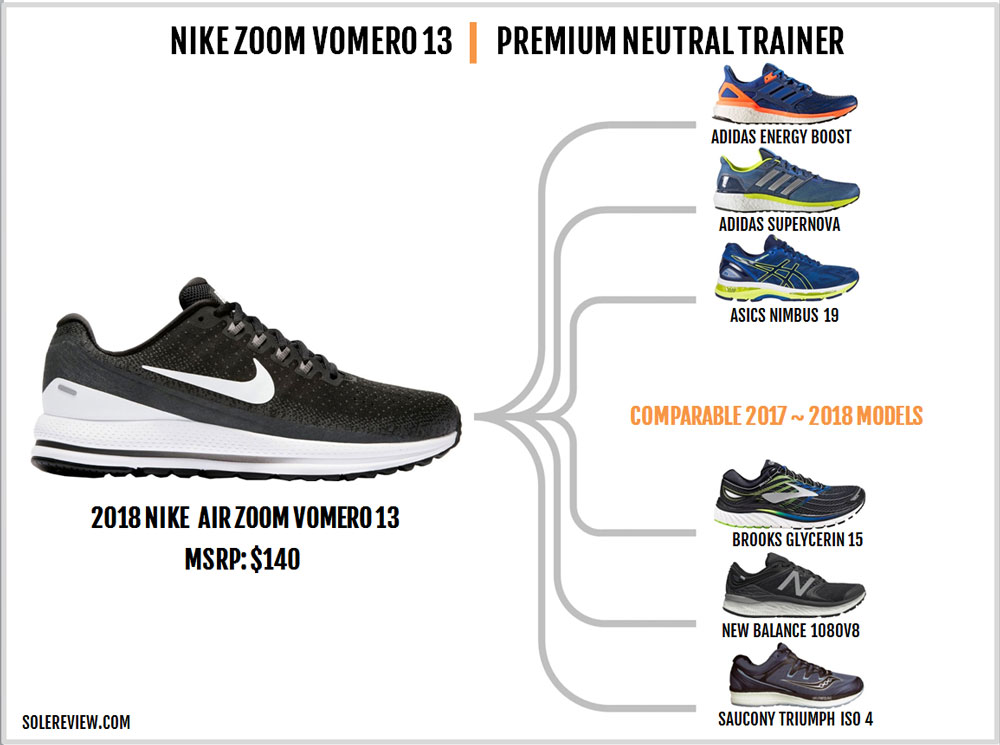 The Vomero undercuts its peers in the premium neutral cushioning class by $10-$20. With the exception of the adidas Supernova, all shoes listed here have an MSRP of $150-160, and that makes the Vomero decent value. Let’s take a quick look at what else is out there.

The Asics Nimbus 19 is a medium-soft trainer with a Flytefoam midsole and a snug upper. The adidas Energy and the Supernova are soft neutrals; the Supernova has a stiff upper but we’ve included it in the list due to its plush ride quality.

If you want a supportive yet plush neutral, then the Brooks Glycerin 15 is your shoe. The recently released Saucony Triumph ISO 4 is also a good buy if you want a full-length Everun foam experience without the mushiness of adidas Boost.

There are a few others. The New Balance 1080V8 is an option if you like the Fresh Foam platform. The Brooks Levitate is a medium-soft trainer which uses the latest DNA AMP Polyurethane material. And if you’re a fan of Mizuno running shoes, then the supportive Wave Sky compares with the Nike Vomero.