It’s year two for this versatile neutral trainer - and an improvement over the Floatride Energy V1. Is this the best running shoe of 2020? Perhaps.
Cushioned and supportive ride, pace-friendly transitions, breathable, smooth interior, good price-value, durable and weather-resistant midsole
No widths 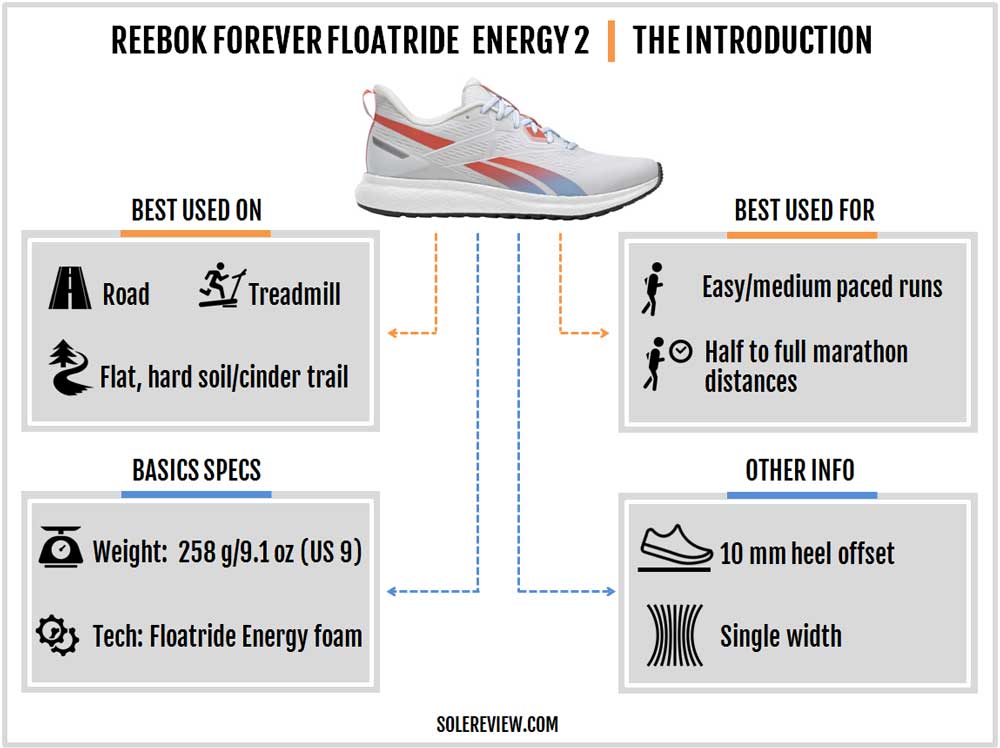 The footwear industry operates on very long lead-times. By the time a certain running shoe gets to the market, the next edition is already locked in and ready to go.

That’s the nature of this business. It takes nearly 18 months for the brands to design the shoes, compile orders, manufacture, and ship to the retailers. In essence, it’s hard to use the market feedback of the current shoe to improve the next model.

All things being considered, Reebok gets an A+ grade for the Forever Floatride Energy 2 update.

Last year, we loved the just-right cushioning delivery of the Forever Energy. The durable e-TPU midsole was resilient and mildly responsive; the cushioning comfort wasn’t an impediment for slightly faster runs.

The upper was pretty basic but there was very little to complain about. Sure, the fit was a bit long in the forefoot and the tongue had no sleeve. But those were not deal-breakers, and the whole was greater than the sum of parts. We liked the shoe so much that it made our best running shoe of the year.

The Forever Floatride Energy 2 (FFE 2) exceeds expectations with an improved upper while carrying over the superior ride quality.

Will the V2 get our vote for the best running shoe of 2020? As how things stand today, very likely.

Reebok abandoned the bland ‘Delta’ logo in late 2019, so all new intros get the familiar ‘Vector’ logo. This change alone makes most Reebok shoes better looking, and the Floatride Energy 2 is no exception.

In addition to the classic and streamlined styling, the new logos add structure to the midfoot. Also, the V2 has a larger internal toe bumper and reinforced lacing panel. The lacing turns asymmetrical on the new model, with the first three rows positioned diagonally. These updates affect the upper fit in more ways than one.

The tongue and heel acquire new-found comfort. The heel changes to an outwards-flaring (undoubtedly adidas-inspired) design and gets a much softer lining. The tongue has the same (new) plush lining for a better over-the-foot experience.

The 2020 Forever Floatride Energy 2 has something that the V1 lacked. The tongue is now attached to an inner gusset that adds interior smoothness and eliminates tongue slide.

The midsole and outsole stay the same as last year, so the ride quality is identical. You even get the identical non-removable insole.

Though Reebok advertises a 9 mm drop this year against the 10 mm offset from last year, we’re unclear where this variance comes from. Functionally, it makes no difference.

All the design tweaks are upper-related, and that leads to a slight change in the fit. A bigger internal toe-stiffener and midfoot sleeve provide the Forever Energy 2 with more structure.

The US $100 price stays the same. Thus, the new model offers the same, if not better, price-value than the V1.

In a way, the Forever Floatride Energy is the adidas Supernova Glide of our times. A versatile ride character is what the Glide had in spades, and that holds for the Reebok shoe as well. That became abundantly clear after a just few runs in the last year’s model.

That doesn’t change for the V2. With the same midsole and outsole comes an identical ride quality; one that balances distance-friendly cushioning with the capability to support higher-paced runs.

No matter whether you’re a wise shoe dog or a someone who is dipping their toes into running, the Forever Energy has something to offer.

If you’re new to road running, the cushioned ride doesn’t punish your feet. Nor does it feel mushy and slow. It’s also a great starting point to understand what running shoes are all about.

On the other hand, a seasoned veteran will realize that the FFE 2 bridges the functional gap between hyper-cushioned marathon shoes and racing flats.

And just how does the Floatride Energy manage to hit this sweet spot?

In our review of the FFE 1, we described the midsole softness as being halfway between the cushier adidas Boost foam and the firmer Saucony Everun.

Saucony is phasing out Everun in favor of the plusher Pwrrun+, so Reebok’s Floatride Energy foam will eventually become the firmest e-TPU variant. 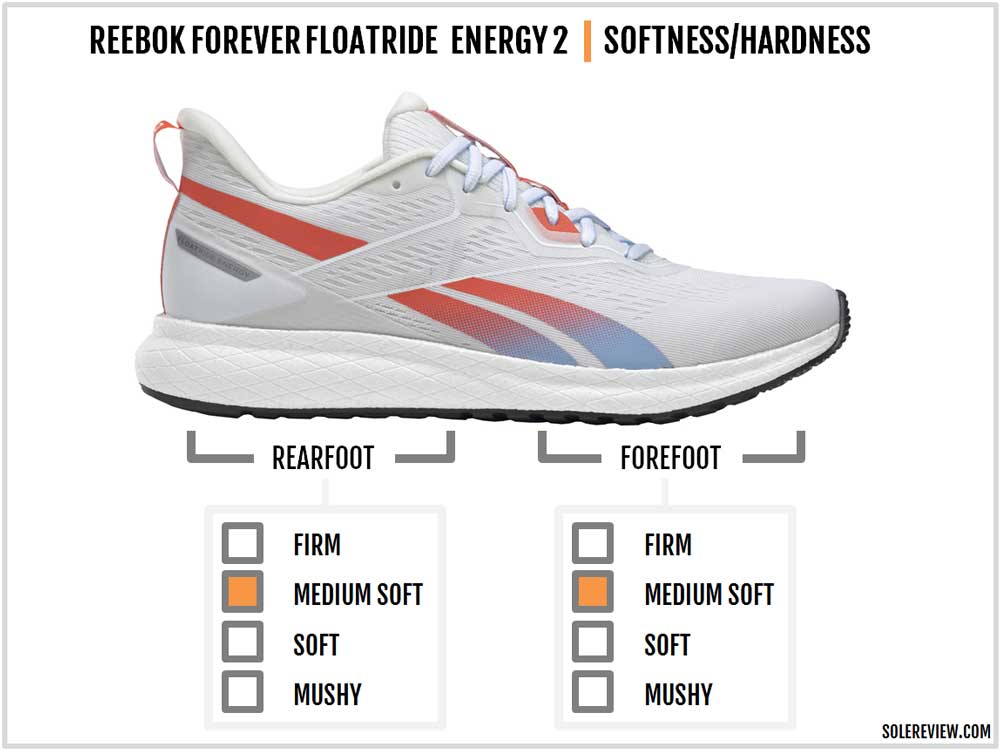 The relative firmness of the Floatride foam contributes to the overall versatility. Along with the consistent single-density set-up, the midsole volume also plays a part in the ride character.

In this case, the midsole is sized between full-body trainers like the Saucony Triumph 17 and low-profile pacers like the adidas Boston. This sweet spot ensures sufficient comfort for runs of most mileages.

The insole isn’t your typical, compression-molded, drop-in kind. The thin EVA foam sheet is pasted to the lasting underneath – which is the same as last year. This means that most of the cushioning is produced by the midsole  – this is as unadulterated it gets.

Thus, the Reebok Forever Energy 2 lacks the initial ‘cush’ that one usually experiences during in-store wearings.

However, running is what reveals the shoe’s true ride character. 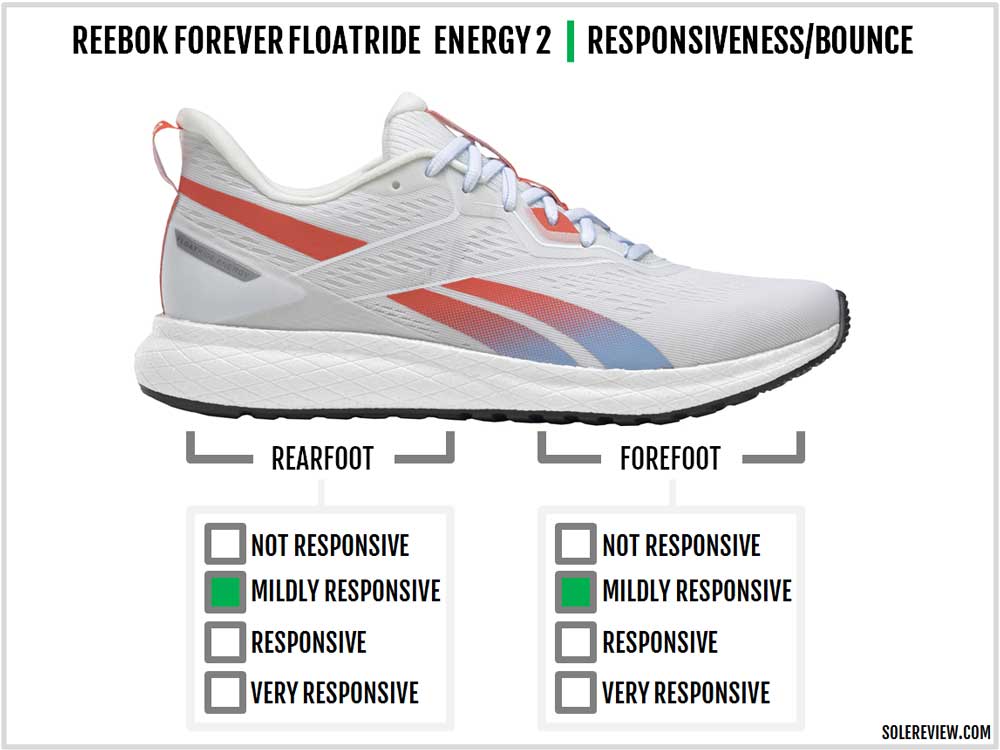 The midsole isn’t overly springy. Landings and transitions are a bit muffled; while the e-TPU midsole (not to confused with Reebok’s Pebax foam) is quick to return to its original form after a compression cycle, you won’t get Nike Zoom X or Saucony Pwrrun+ levels of bounce.

At no point during a run does one sense a dearth of cushioning comfort. Though other full-volume shoes do feel better for marathon-level endeavors, this Reebok shoe will run through most distances without beating your feet down.

The Floatride Energy excels between pace ranges of 4’30” to 5’30” per km. The single-density midsole and full-length rubber outsole bring smoothness to the ride. The midsole sidewall has a rounded flare, so the ride is stable too.

Naturally, going slower than 5’30” isn’t a problem. That said, if you’re running quicker than 4’30” then a racing flat would be more appropriate. 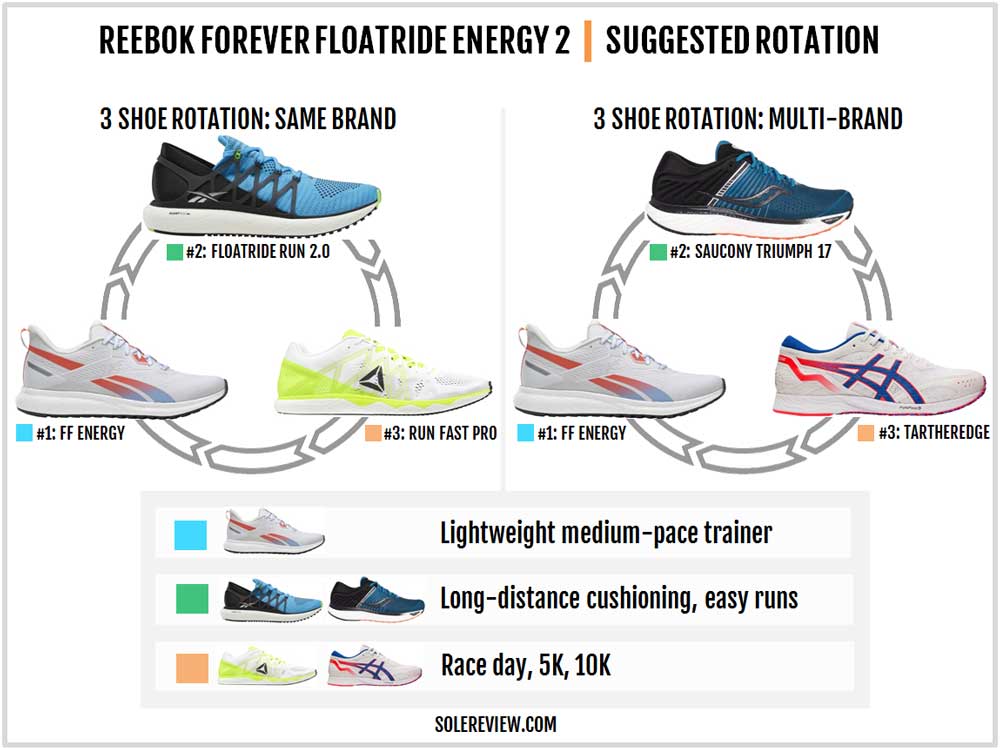 Even though the Floatride Energy is fairly versatile, some running needs are better met by other shoes.

For example, long-distance runs feel better in something like the Saucony Triumph 17. Even the Reebok Floatride Run 2.0 with its soft Pebax midsole is an option, but it’s got a bit of a lifestyle sneaker vibe.

Racing flats like the Reebok Floatride Run Fast Pro (pricey, though) are excellent performers for speed runs, track intervals, and races. If you don’t want to spend the Run Fast Pro money, then the Asics Tartheredge offers decent price-value.

IS THE FOREVER FLOATRIDE ENERGY 2 DURABLE? 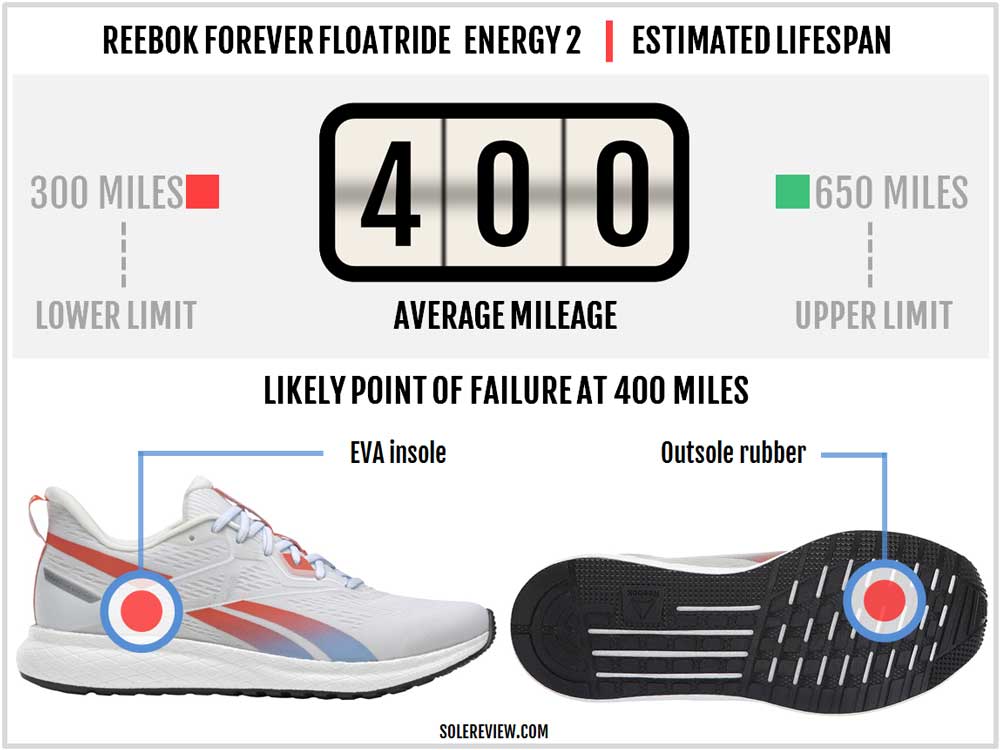 Expect the same lifespan from the V2 as the previous model. In mileage terms, that equates into approximately 400 miles.

The expanded Polyurethane midsole is highly resistant to cushioning fatigue and functions independently of hotter/colder temperatures. The outsole durability isn’t at par with adidas Continental or Saucony’s crystal rubber, but it wears well.

Nothing on the FFE2’s upper design suggests low durability either; everything feels well-stitched together. 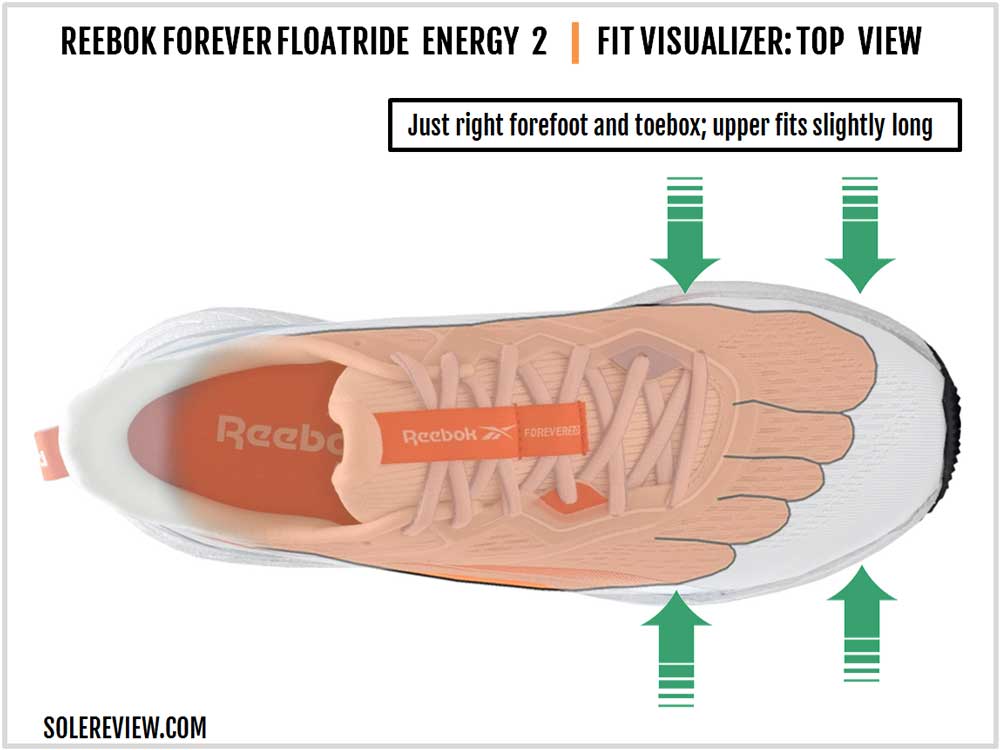 Like the Forever Floatride V1, the 2020 model doesn’t fit true to size. It has a long toe-box, though that’s remedied – to a certain extent – by utilizing a larger internal toe-bumper.

There’s a sense of more structure inside the toe-box, particularly on the sides and the upper toe area. And our advice about the sizing still holds from last year – buy true to size.

One of the quirks of the last model was its somewhat narrow forefoot that contrasted with the long toe-box fit. The V2 makes amends by introducing asymmetrical lacing on the upper. The eyelets are placed in a sideways slant, and this new arrangement eases off some pressure.

Reebok adds a new feature to the V2. The tongue is now bound to a partial inner sleeve, so you no longer have to deal with the tongue slide. The midfoot fit is smoother and more supportive.

The comfort levels go up several notches inside the heel and under the tongue. The redesigned upper replaces the traditional heel cup design with an adidas style Achilles lip. The heel and tongue lining have been updated with a softer fabric that is more comfortable.

So if you happened to be one of those runners who found the Forever Energy 1’s heel stiff, worry no more. 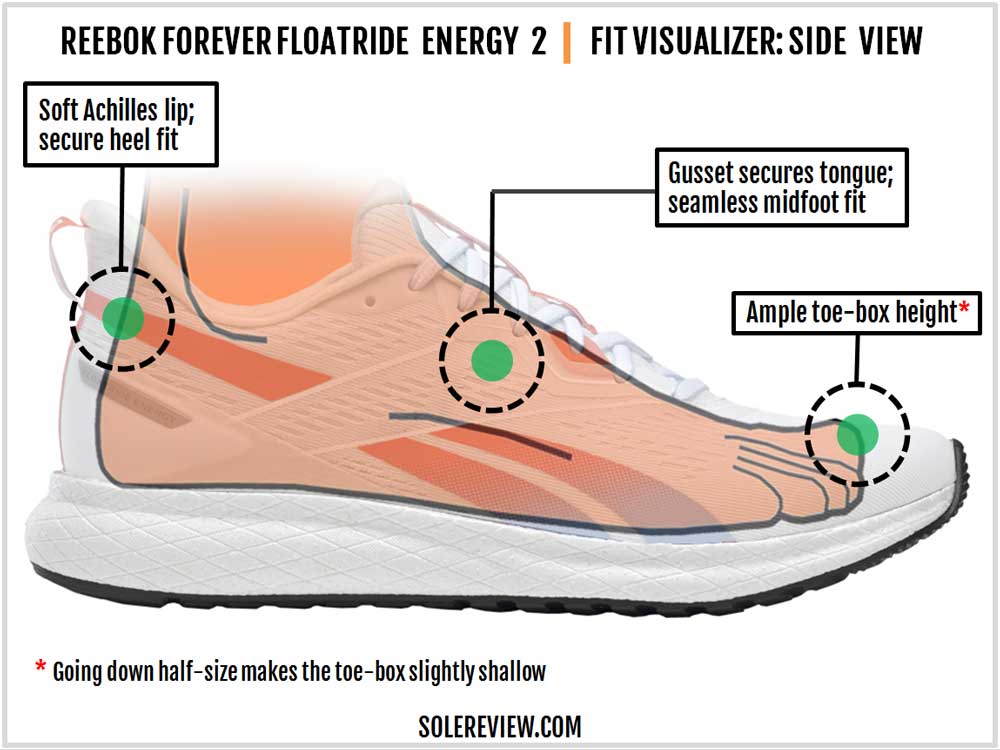 The heel grip is good, if not great – which is true for most shoes with this flared design. This change also means that the heel cup is deeper along the Achilles.

The rear gets a double dose of reflectivity. Replacing the single strip (on the FFE 1) are two strips – one on either side of the heel.

There are some design trends in the market that others follow, and it all began with the 2015 adidas UltraBoost’s flared heel. Nike and New Balance may be loathe to admit it, but it’s easy to see where their heel designs drew inspiration from.

The engineered mesh isn’t very thick, so there’s plenty of ventilation. Besides, the entire upper isn’t sleeved – only the midfoot is.

When compared to the Floatride V1’s upper no-frills upper, the 2020 redesign feels a lot more structured, nuanced, and more premium. It’s worth noting that the sleeve, the reinforced lacing panels, and the new heel come at no additional cost.

And we have to say it again – the classic Reebok Vector logos make the shoe look so much better. 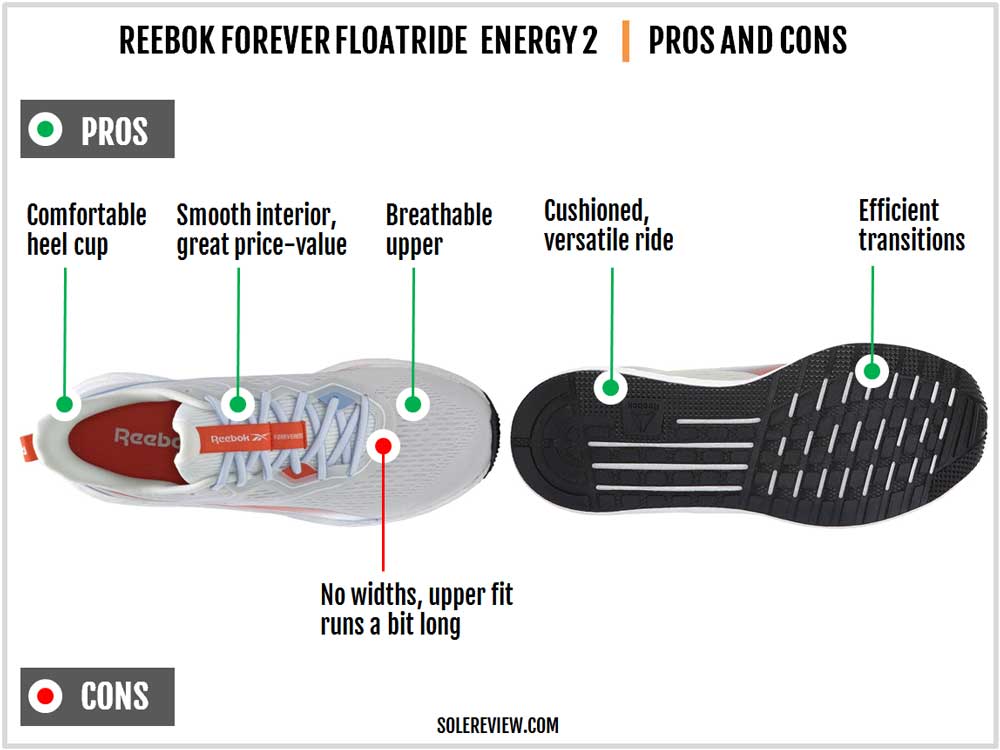 There were very few flaws even on the previous model. If you remember, we called out the lack of sleeve as a negative. The 2020 model gets a sleeve. Now what? If we said that the new upper is stiffer than the V1, we’d be nitpicking instead of offering a sincere critique.

Okay, there are no widths. But then that’s true for the entire Reebok and adidas catalog; why single the Floatride Energy 2 out?

It’s okay, Solereview. Not every shoe needs to have a flaw. And it’s ok to give a running shoe a 95% rating once in a while. 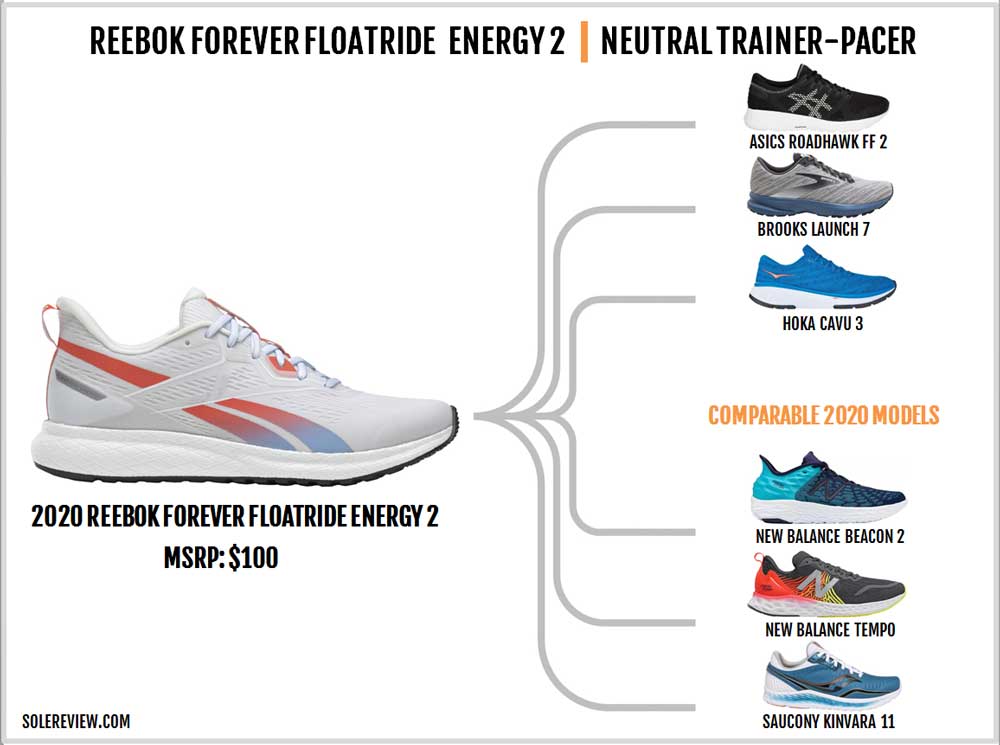 The way we see it, none of these running shoes on this comparison chart are true substitutes for the Forever Floatride Energy 2.

Each shoe listed here has something different to offer. The Asics Roadhawk FF 2 is a slightly firm daily trainer with a basic upper; the Brooks Launch 7 has a firmer ride than the Roadhawk but with a plusher upper.

The Hoka Cavu 3 is somewhere in the middle. The Cavu’s redesigned knit upper combines a smooth interior with a plush heel fit; the pace-friendly ride is medium-soft with a 6 mm heel-to-toe drop.