That said, Saucony’s spin on Everun is nowhere as impressive as adidas’s interpretation. Should be pretty obvious, considering how watered down this execution is. 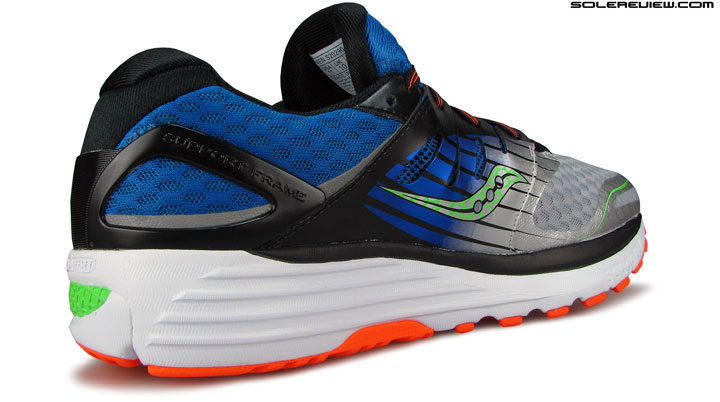 The Everun only contributes to a small percentage of the cushioning delivery mechanism. The bulk of padding duties is still performed by the humble EVA foam.

Majority of the midsole cushioning on the Triumph ISO 2 is still delivered by the regular EVA foam. The Everun bits are mere garnish, so while the new tech undoubtedly impacts the ride character, the difference isn’t as much as one would imagine.

The Triumph ISO 2 is a very good shoe, as was the 2014 Triumph. Yet the ride quality ends up being very similar, which leads you to wonder whether an upgrade was worth it. Saucony marketing goes hyperbolic on the Everun, using power phrases like ‘rock your running world’, and ‘dramatically more lively and responsive’.

However, the final product experience fails to keep pace with its marketing (as was the case on Powergrid+). Hence with the ISO 2, one just needs to manage expectations, and the world will be a happier place.

We’d say that the ISO 2 is a very competent shoe, just not very engaging in character. It is clinical all-around goodness with the personality of slightly peppy minivan.

That aside, there are plenty of updates on the ISO 2 worth writing about. A lot of it is condensed in the new midsole architecture, while a few are scattered across the span of the ISOFIT upper. We’ve been ranting about the new Everun insert for about a page now, so without much ado, let’s lay the minutiae out in the open. 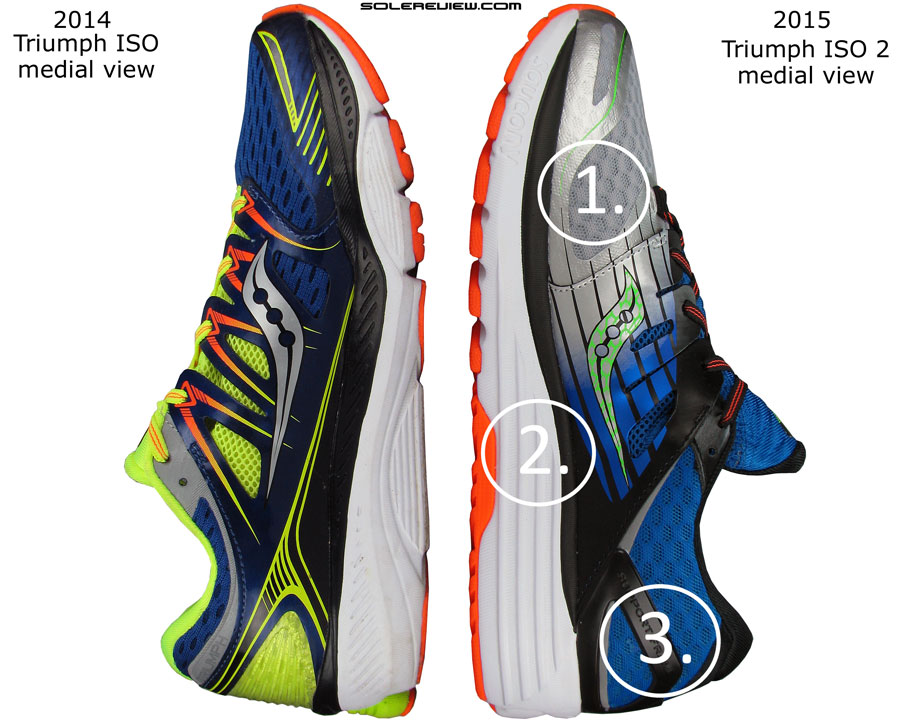 Fundamentally, the Triumph ISO 1 and 2 aren’t all that different. The layer which separates your foot from the ground is still comprised of compression molded EVA with a 8 mm drop, an outsole made of  softer blown and firmer hard rubber, plus the removable insole. There are new faces in the crowd, like the Everun midsole lining and the crash pad, which leads to an altered cushioning action.

If we had to round up the differences in ride behavior between the two Triumph ISO versions, it’d be two things. The first is that the ISO 2 is more responsive than the 2014 ISO.

The other part is a bit counter intuitive, which is that the new ISO feels slightly firmer than the last generation Triumph. Strange, is it not, given the Everun infusion?

As it turns out, the outsole and midsole architecture plays an important role in affecting the soft vs. firm feel. 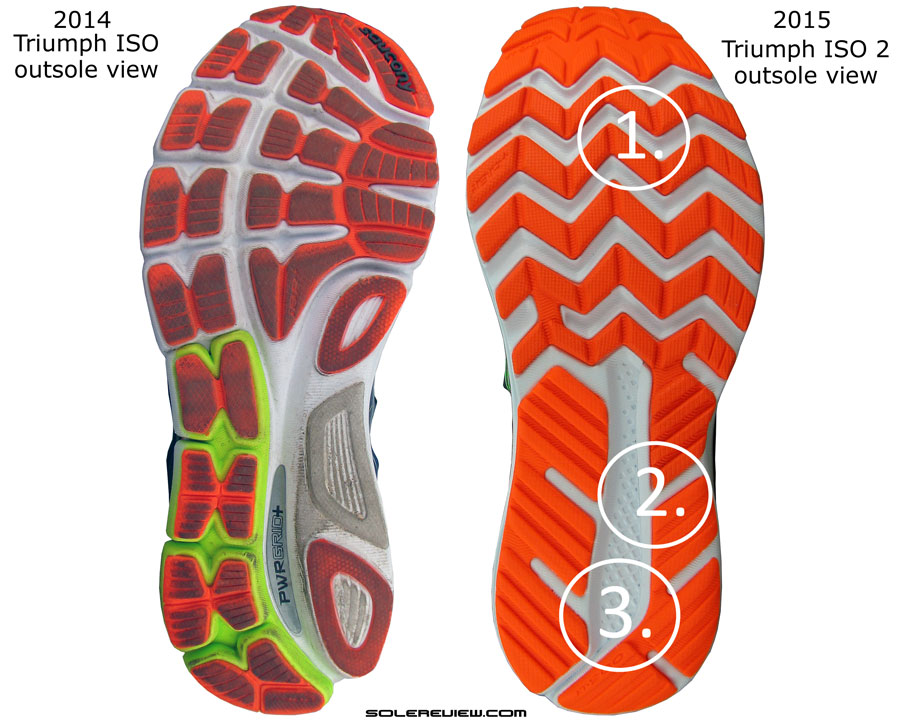 1) Forefoot has a ‘filled-up’ design instead of smaller pods 2) Shallower pods, and the outsole is bonded to the firmer EVA now, not the softer crash pad 3) The transition grooves goes shallow, and the split heel edge narrows the gap.

Though the Triumph ISO 2 outsole maintains the soft and hard rubber combination, the layout gets a significant make-over. The forefoot is redesigned; replacing the smaller pod-like lugs of the 2014 Triumph are horizontal strips which look like forward-facing Chevrons.

Last year’s Triumph ISO had these small lugs sit on foam pods, which compressed under weight. None of that is available this time around, with the herringbone strips forming an unbroken piece of rubber placed sideways. 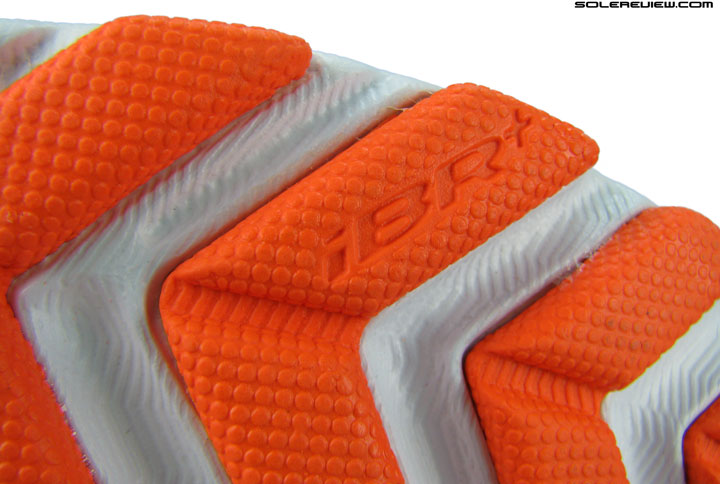 With the pod like structures gone, the midsole loses a bit of its former soft feel. The integrated rubber strips under the forefoot tones down the pod effect, and in its place delivers a firmer ride. That said, what the Triumph ISO 2 loses in cushioning softness, it gains in better transition and ground feel.

With the corrugated rubber segments uniformly covering the underside, the forefoot feel is more consistent. The outsole in the front is still blown rubber, so the Triumph ISO is spared of jarring landings. 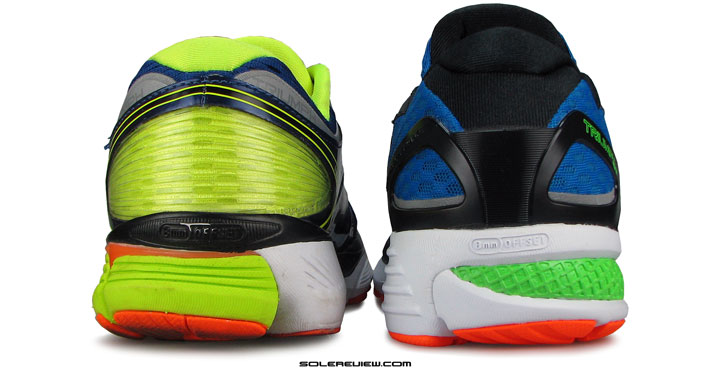 Spot the differences: The lateral Everun heel wedge is smaller than the SRC version it replaces; the outsole is mounted on the firmer EVA and not Everun.

Similar winds of change blow over the heel and midfoot. The medial midfoot which was previously exposed EVA foam is now topped off with rubber, and the lateral (outer) side loses the split pod outsole design with its deep grooving.

It is also important to remember that the 2014 Triumph’s split outsole was mounted directly on the softer SRC crash pad. That isn’t so on the Triumph ISO 2. The groove deprived rubber outsole is mounted on the firmer EVA and not the Everun crash pad. 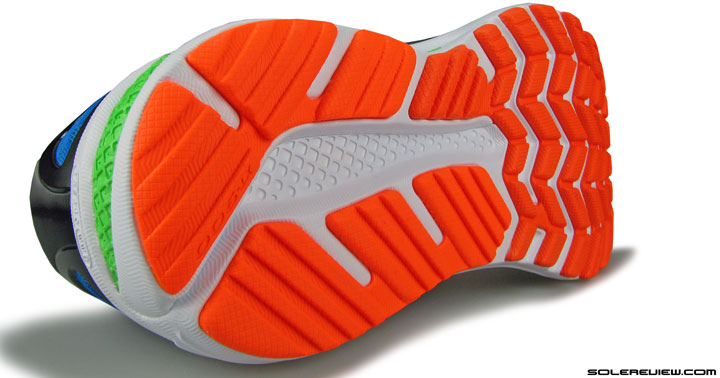 Lastly, the heel edge has a major role to play here. On last year’s Triumph ISO, the medial and lateral heel center was separated by a deep groove – the one which also separated the regular EVA foam from the SRC crash pad.

This has been filled up on the ISO 2, along with an updated transition groove which is now much shallower. This reduces the ‘breakaway’ effect of the heel edge, and reduced splaying of the exposed foam area between either sides of the outsole.

Add to this the removal of outsole pods and the firmer lateral side, and you end up with a firmer ride than the 2014 Triumph. So is the new Triumph ISO 2 plush? We’re afraid not quite, but it is definitely more responsive than the previous version.

If we had to guess, the upcoming Saucony Ride 9 should ride softer than the Triumph ISO 2. 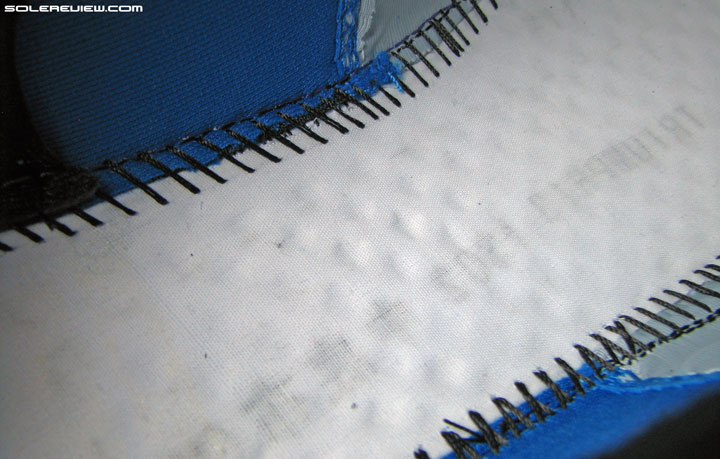 Look who it is! If it isn’t our good friend Powergrid+, hidden beneath that fabric layer. C’mon, we can see those dimples… 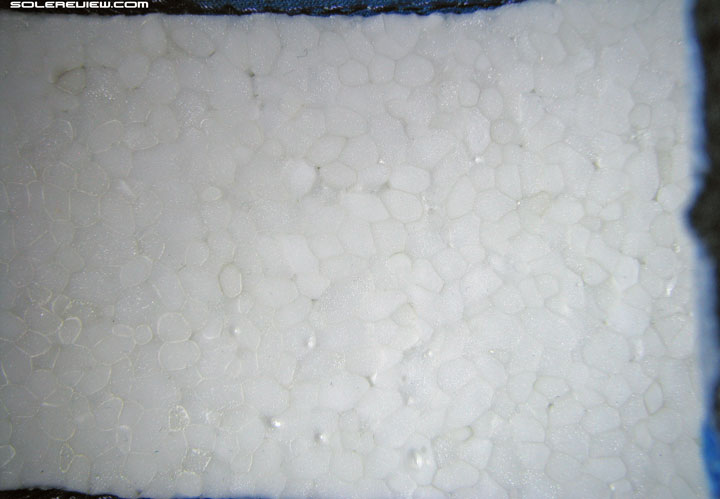 This looks like… adidas Boost foam in cross section. Oh wait, that’s exactly what it is! 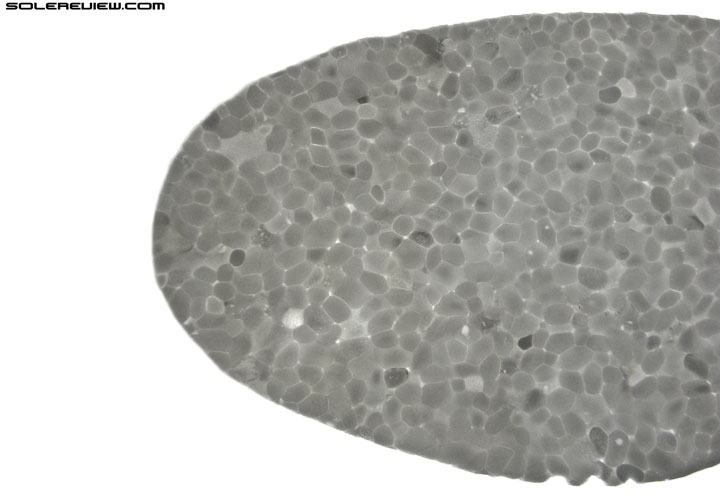 We had fun passing light through the adidas Boost, so here we go again. Whee!

Decoding the responsive part of the midsole is easy. Last year’s Powergrid+ was nothing more than a block of EVA foam with holes punched in them. The Triumph ISO 2 still manages to silently sneak in the Powergrid midsole, but with a difference.

The new Everun topping over the Powergrid+ midsole adds a responsive base layer, and at higher speeds the Everun heel crash pad comes into play. This is where the Triumph ISO somewhat mimics adidas Boost; higher pace is rewarded with higher levels of responsiveness.

We’ll repeat here – you have to manage your expectations; the Everun is a far cry from a full Boost foam midsole. Think of Everun foam as a adidas Boost teaser, and nothing more. 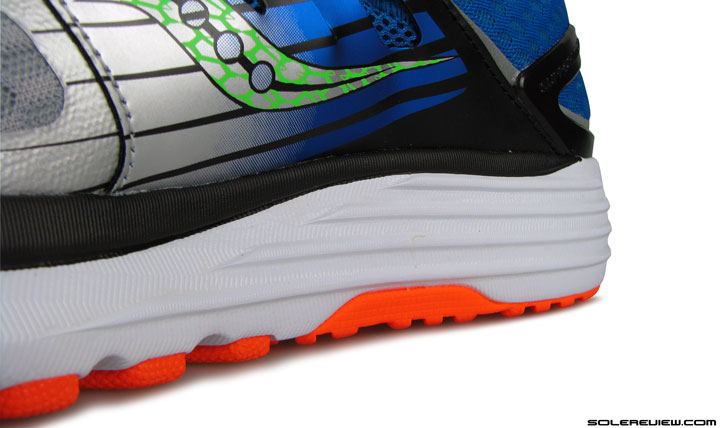 Owing to its midsole design, the Saucony Triumph ISO 2 is a supportive neutral.

What hasn’t changed on the Triumph is its supportive ride quality. The original ISO had a firm midsole with a flared forefoot and heel base, and the new Triumph  ISO 2 retains that character.

The forefoot midsole edges flare visibility out, though the lateral heel slims slightly along with the removal of the plastic stabilizer. So compared to the 2014 ISO, there is a small amount of cushioning bias which favors the lateral side.

Apart from that, common design elements such as the solid medial midsole and firmer foam density produce a planted ride. 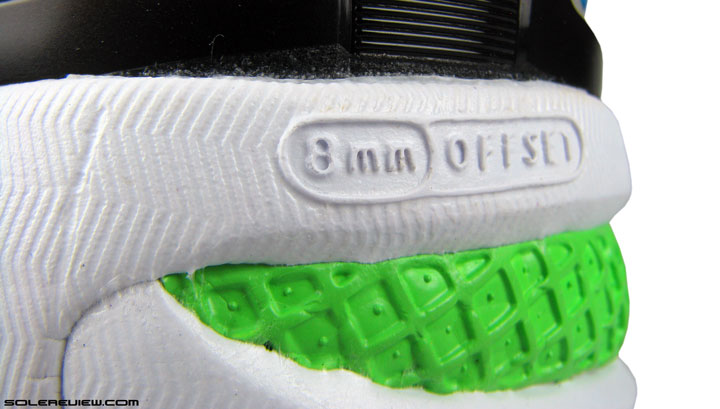 The cushioning quality is firm, yet responsive with a strong support overtone. All in all, a well rounded product, never mind the underwhelming Everun experience.

So if we had to recommend three $140-150 neutral shoes with decent cushioning levels mixed with a supportive feel, the new Triumph ISO would be one, along with Brooks Glycerin 13 and the Vomero 10. The ride quality is dependable, and there is plenty of midsole depth available to pad your landings.

The underfoot feel is consistent, making transitions feel uniform and fuss free. Contrary to what one may think, the Everun heel does not create a sink-spot.