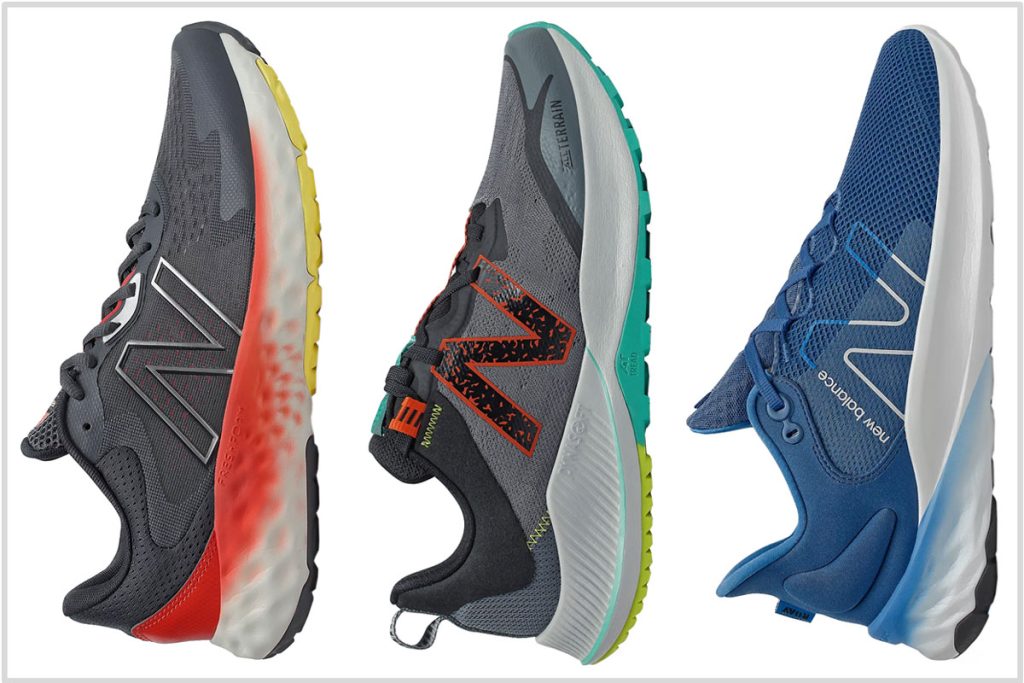 This article has been updated with current models for May 2022. The Shando and the Pro Knit have been removed.

Till a few years ago, New Balance used to be the undisputed king of budget running shoes.

Many affordable models lurked beneath the assortment that made up the higher-priced Fresh Foam and FuelCell collections. For every 880, there existed the less-expensive 680. And so on. Back then, other brands often lacked running shoes that were priced in double digits.

Times have since changed.

While New Balance still sells a sizeable number of sub-$100 running shoes (this guide is proof), there’s an absence of consistent product strategy.

For example, adidas’s most popular budget shoe is the Duramo. Nike has its Winflo, and Saucony sells the Cohesion. The Asics Gel-Contend is a well-known running shoe model that has been around for a while.

But think of a budget New Balance running shoe that’s been consistently updated over the years, and there’s none. Sure, one could argue that the 680 is such a shoe, but is it the highlight of New Balance’s budget catalog? Not really.

Instead, what we have is a hodge podge of different shoe models that are vaguely inspired by the more expensive models. The Fresh Foam Evoz bears a passing resemblance to the 1080, and there’s a glimpse of the Fuelcell Rebel in the New Balance Breaza.

New Balance also sells several trail running shoes below $100. There are a couple of models with Fresh Foam midsoles while the rest have a traditional build. What’s interesting is that some of them are purpose-built trail shoes (like the Nitrel) and not merely road-running models retrofitted with a knobby outsole. The Arishi Trail is a good example.

To be honest, given the current state of New Balance’s budget running shoes, we’d rather choose something from adidas or Nike if a sub-$100 running shoe is what you’re after.

To give credit where it’s due, New Balance offers multiple widths on their entry-level products – a benefit that most brands do not offer.

Our top 10 affordable picks are grouped into two categories – road and trail.

Feel free to read our main New Balance guide to explore other models that may be of interest.

This is a no-frills, neutral running shoe with a basic Fresh Foam midsole and breathable engineered mesh upper. It even has a regular heel collar – just in case you don’t like the accordian-esque heel of the newer Fresh Foam models.

The single-density midsole offers a smooth and moderately cushioned ride for most runs, daily sessions included. At the same time, you won’t find the softness of the more expensive Fresh Foam products; the Arishi has a firm-ish cushioning that is vaguely reminiscent of the original 980.

Not much has changed on the Arishi V3 compared to the previous model. The V3 gets a new outsole with small windows under the forefoot for softer and smoother forefoot transitions. Like the V2, the 9-ounce Arishi is respectably lightweight.

Of all the budget New Balance running shoes, the 680 is the only model that has consistently shown up every year. The V7 suffix means that this is the 7th edition of the 680 – a toned-down version of the well-known 880.

If you’re not aware of New Balance’s legacy nomenclature, the XX80 suffix meant that it was a neutral shoe. For example, there’s the higher-priced 1080V11, the mid-tier 880V11, and finally the budget 680.

Thus it makes sense for the 680V7 to be a comfortable neutral shoe with a smooth ride – because that’s exactly what it is.

The V7 has been updated with a dual-density Fresh Foam midsole, so the ride is smoother than the V6. The articulated outsole complements the EVA midsole to produce a cushioned yet supportive ride for daily runs. Its 9.5-ounce (270 gram) weight is respectable for a shoe with an EVA midsole.

The mostly-mesh upper gets its fundamentals right. The exterior shell uses a modern engineered mesh, sleeve-less tongue, and a fused toe-bumper. The interiors fit true to size and are comfortable enough for everyday wear.

In addition to the standard width, the 680V7 also sells in a wide and extra-wide. 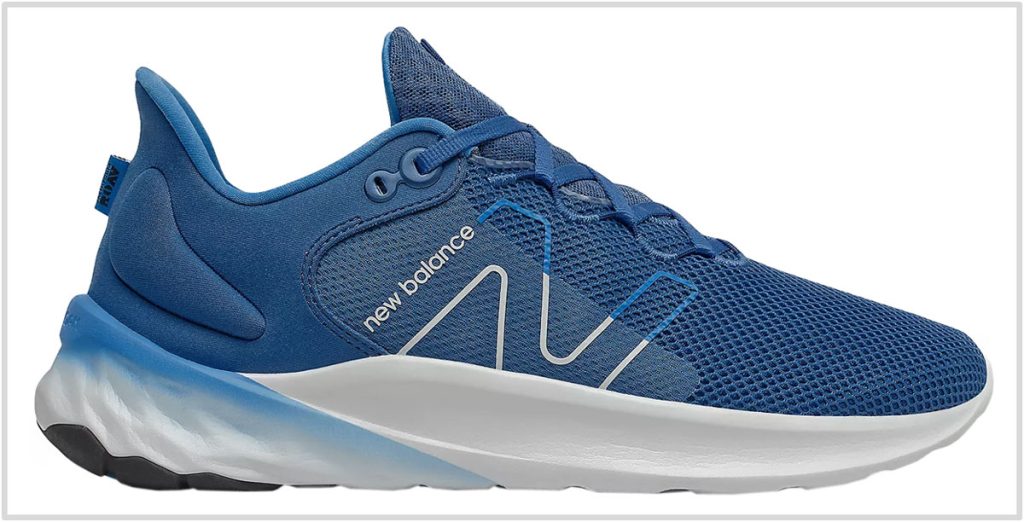 Though the full-length Fresh Foam midsole is comfortable enough for all-day wear, the upper lock-down is found wanting during serious runs. The lacing relies on a 4+1 eyelet configuration, thus falling short of performance running shoe standards.

If you go easy on the Roav V2, then it’s an excellent lifestyle sneaker at a relatively affordable price. The spacer mesh upper offers breathable comfort with a smooth fit; in the rear, a foam-filled heel offers a plush grip without chafing the Achilles.

As long as you’re aware of the Fresh Foam Roav’s limited performance range, it is a comfortable everyday trainer capable of mild athletic activity.

A 2E (wide) width is optional.

The Breaza is clearly inspired by the Fuelcell Rebel, but the midsole is made using an EVA foam blend called the Dynasoft. the Breaza tries to achieve a similar ride experience as the Rebel or Prism, but on a budget.

Except for the rubber-covered forefoot and heel edge, the midsole is almost all foam. This makes the Breaza a cushioned yet affordable shoe for easy runs. Not a bad shoe for $70, we say.

It doesn’t look cheap either. The multi-layer exterior shell uses a translucent mesh that mimics the Fuelcell Rebel, whereas the padded tongue and heel add interior comfort. And like the Rebel, the upper is relatively unstructured without a stiff heel counter.

The Fresh Foam Evoz vaguely reminds us of the first Fresh Foam model – the 980. Except that the Evoz is a budget shoe – if you can even call a $90 shoe that.

Just like the 980 from eight years ago, the New Balance Evoz uses a single-density Fresh midsole to produce a smooth, albeit firm ride. There’s nothing remarkable about the ride quality though; it’s just a stack of foam that’s good enough for low-intensity runs and everyday wear.

The upper is also very 2014. There’s nothing wrong with the fit, but at the same time, there’s not much to write about. The Evoz’s mesh upper combines fused overlays with a sleeveless tongue to meet the functional minimums – nothing more, nothing less.

First, take a firm Fresh Foam midsole of a respectable thickness and shod it with a full-length outsole. Finally, take a smooth and secure-fitting upper that is both breathable and protective along with functional bits like a heel pull tab and molded toe-bumper.

There you have it – a trail running shoe that has a comfortable ride, decent traction, and a fully functional upper.

Naturally, given its relatively minimalist design, there are certain things that the Arishi Trail is not. It is best used on mild trails where the absence of a rock plate and sticky rubber outsole isn’t a pressing concern.

The fit, while being true to size, runs narrow. The low-profile midsole also isn’t the most supportive. If a higher level of stability is required, then skip the Arishi and try shoes like the Shando or Nitrel.

This trail running shoe carries forward the Nitrel name from the V3 but has been completely redesigned from the ground up.

While the Nitrel V3 was more of a ‘regular’ trail runner with a please-all character, the V4 is quirky in comparison. Instead of the Nitrel v3’s full-length Revlite midsole (of the 1500 fame), the V4 uses a Dynasoft midsole and a high toe-spring that promotes a forward-rolling motion.

It’s not very soft though; the Dynasoft foam has a tinge of firmness – this is no Fresh Foam. And that’s not a bad thing for a trail shoe; a firmer ride equates to better stability over uneven terrain.

The upper fits snug and short, so that’s something to bear in mind while purchasing the Nitrel V4. The fused toe bumper, while protective, makes the ceiling narrower and the sizing at least a half size small.

Don’t get us wrong. The Nitrel V4 is a nice enough trail shoe that gets its basics down pat. The foam midsole provides decent levels of ride comfort, and the full-coverage outsole does its job. The upper, while narrow, delivers a trail-worthy fit.

It’s just that the Nitrel V3 felt more sorted, if that even makes sense.

The 510V5 is so entry-level that New Balance doesn’t even list the shoe on its website. This is a basic trail shoe that competes with the likes of Saucony Cohesion TR.

The design takes a no-frills approach without skimping on the essentials. Be it the EVA foam midsole, the full rubber outsole with its aggressive lugs, or the protective and layered upper, the 510V5 has what it takes to be a basic trail running shoe.

Sure, the absence of a rock plate, special outsole, and waterproofing make the 510 unsuitable for challenging terrain. On the other hand, if your run consists of packed trails or cinder paths, then the 510V5 delivers satisfactory performance.

It’s worth mentioning that the layered upper fits a bit narrow, and the injection-molded midsole has a firm ride.