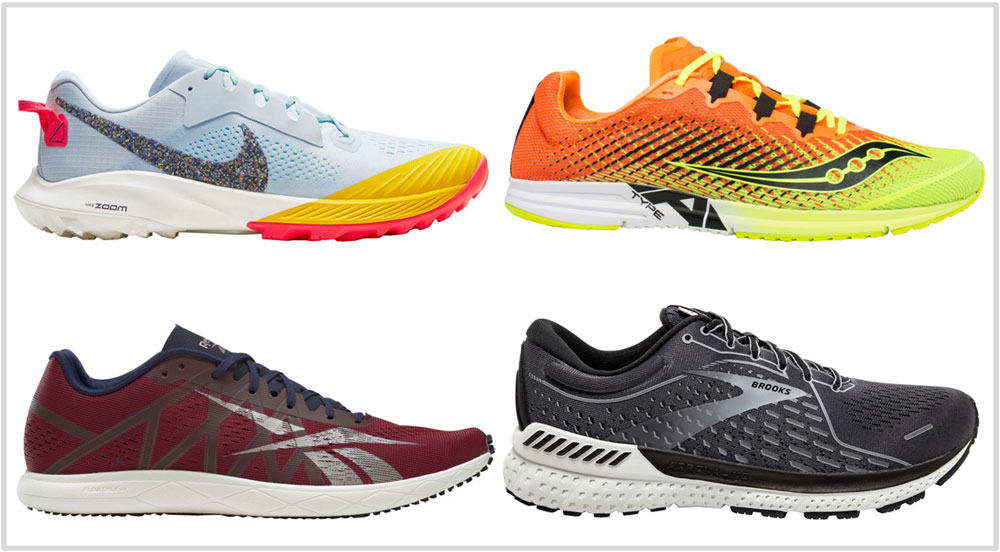 This article has been updated with current models for November 2020. The Brooks Ghost 12, Brooks Adrenaline GTS 20, and the Nike Terra Kiger 5 have been replaced with their updated versions. The Asics DS Trainer 25, Nike Pegasus 37 Shield, Saucony Peregrine ICE+, and the Salomon Snowspike CSWP are new additions. The adidas SolarBoost ’19, adidas Boston 8, adidas Terrex Agravic XT, New Balance Summit K.O.M, and Salomon Sense Ride have been removed.

Amid all the hype surrounding new midsole foams and cushioning tech, the outsole often gets overlooked.

But it shouldn’t be – an outsole is a very important component of a running shoe. No amount of midsole cushioning or springy responsiveness can salvage a running shoe with a sub-par outsole grip.

An outsole doesn’t stop at just providing traction; it adds value in other ways. A well-designed outsole works together with the midsole to improve the transition quality.

Also, depending on the material and geometry, the outsole acts as a defensive layer from the small rocks and debris on the road and trail. Some brands use a more durable compound than the others, thus saving you money in the long run.

But let’s not get distracted. This guide is about shoes with excellent outsole traction, so which factors determine that?

As with most running shoes, things are never straightforward. Looking back at over a decade of running shoe wear-testing, a combination of two factors decide how good or bad the outsole grip will be. There are always exceptions, but the following selection criteria can help you find shoes with the best traction.

An automobile tire is a classic example of how various rubber compounds take the surface characteristics into account.

Firmer summer tires work on dry roads while a grippier and softer rubber is used for winter driving. Off-road motorcycles have knobby tires with aggressive lugs for grip over loose soil and gravel.

Running shoe outsoles work similarly. Softer, blown rubber lugs will generally grip the surface better than harder outsoles. That’s one of the reasons why Brooks models are a part of this guide – their softer outsoles offer plenty of road grip.

A few brands are adopting semi-transparent outsoles made of a harder compound. Saucony calls it Crystal rubber; Brooks markets it as something else. However, their high lifespan comes at a price; they aren’t as grip-friendly as traditional blown rubber.

Brands also offer specific rubber compounds designed to grip better. They go by different marketing names like adidas Continental, New Balance AT Hydrohesion, Salomon Contagrip MA, or Nike OR9. Then there are outsoles like the Saucony PwrTrac that fare well under dry conditions.

So far, we’ve assumed that the outsoles are made of rubber. But what if the shoe in question doesn’t have a separate outsole or uses a limited amount of rubber?

Examples of this would be models like the New Balance 890V7, the NB Beacon, or the Nike Free variants.

Foam outsoles deliver adequate grip on dry/wet roads, powder snow, and clean sidewalks. But throw in some slush, and the traction level will drop drastically. Likewise for smooth artificial floors that are dusty or freshly waxed.

Related read: The best running shoes for wintery conditions – including snow and ice.

The overall traction isn’t only about the materials. The outsole design also influences the level of traction – or the lack of. Smaller and deeper lugs grip better than flat slabs – even if they are made of the same compound.

Outsole articulation or grooving also plays a role. A geometry that carves the outsole into different sections lets them operate semi-independently. This way, targeted traction is provided where it’s required.

Trail outsoles aren’t built the same way as road shoes. While a higher count of longer lugs is also preferred here, these need to be spaced wider to prevent the mud from sticking.

Some geometries are also optimized for both downhill and uphill traction. For instance, forefoot lugs might be angled forward and downwards while the rear does the opposite.

We get it. Outsoles are complex. The best we can do is to list running shoes with above-average levels of outsole traction, and you can work your way up from there.

This guide is arranged by groups first (road and trail shoes) and then sorted alphabetically.

Though this lightweight speed trainer has seen its fair share of changes to its outsole design, the latest model still delivers an excellent grip.

The DSP (Dual Stencil Process) forefoot lugs of the older DS Trainers will be missed, but the dense colony of rubber lugs on the DST 25 have a lot of bite.

When seen as a whole, the latest DS-Trainer is an improvement. The knit upper has a very smooth fit, and the Flytefoam midsole makes those fast runs smooth and quick.

For most Brooks running shoes, two factors give it an edge over the others in the traction department. The outsole forefoot uses soft blown rubber that is molded into small lugs for optimal grip over most running surfaces.

That applies to the Ghost 13 too. The flex grooves also allow the outsole sections to work independently of one other, and their ‘pistoning’ effect also helps with traction.

The outsole grip isn’t the only reason to buy a Ghost 13. This Brooks model is very popular for a reason; the cushioned midsole has enough versatility to make it a jack of all trades, and the comfortable upper doesn’t hurt either.

Let’s be honest here; the Adrenaline GTS 21 is nothing more than a slightly more supportive version of the Ghost. In the context of this guide, that’s a good thing – the Adrenaline has a similar outsole with excellent traction.

The rest of the shoe is what’s expected of Brooks – a soft, cushy upper with a true-to-size fit profile. Considering that this shoe is akin to the Ghost except for the ‘Guiderails’, the ride is very similar. The midsole is cushioned enough for long-distance runs and tame enough for daily runs. 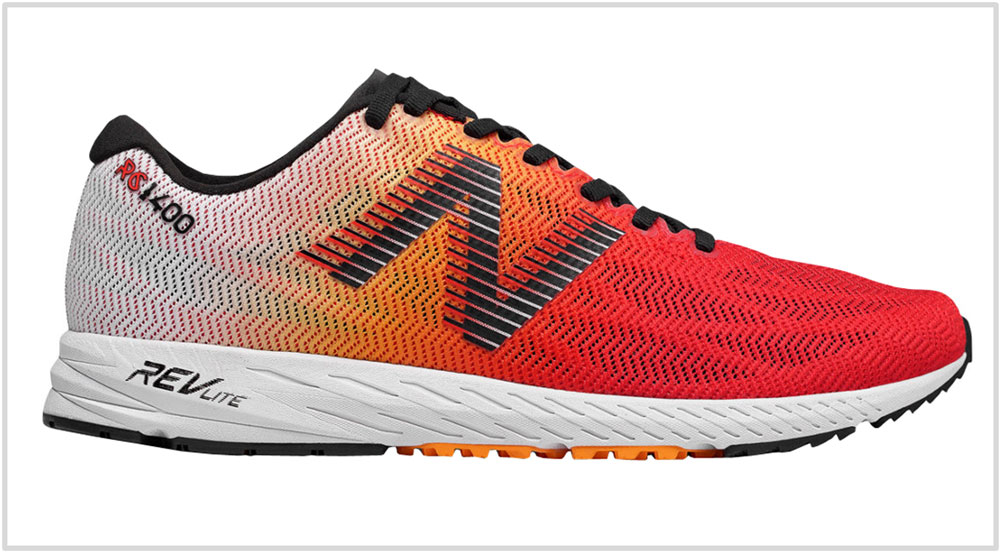 The 1400 doesn’t have the molded lugs of the Hanzo but makes up for it with an outsole that grips via a colony of small, sharp rubber lugs.

It’s that time of the year again. Most of Nike’s ‘Shield’ models have been released for this winter, the Pegasus 37 included. The ’Shield’ assortment is a winterized version of the standard road models with features specifically designed for cold/wet weather running.

For example, along with the reflective and water-resistant upper, the Nike Pegasus 37 Shield has an outsole that uses a special rubber compound for superior wet traction.

This sticky rubber delivers superior performance over wet surfaces when compared to the regular Pegasus 37, and that’s why it gets a mention here.

Reebok’s ‘Speedtrac’ outsole isn’t made of regular rubber. Like the New Balance Hanzo, the tacky lugs are molded separately over a substrate to produce an unparalleled level of traction.

Unlike the Hanzo, the Run Fast Pro’s entire outsole is made using this technology. The Run Fast Pro is super pricey, but then, it’s got a lot to show for that price.

The Type A9 is another road-racer that uses an outsole made of specialized rubber.

Not only does the outsole have a sharp geometry that means business, but it also uses Saucony’s PwrTrac compound for enhanced grip on the road.

The Terra Kiger’s clawy outsole is made of a stickier 004 compound for better traction over slick trail surfaces. As a bonus, the forefoot has a segmented rock plate that protects the foot from the pock-ey stuff without making the midsole overly rigid.

And if you have the Terra Kiger 5, that’ll do perfectly well too. Despite the new upper design of the Kiger 6, both versions share the same traction-friendly outsole. 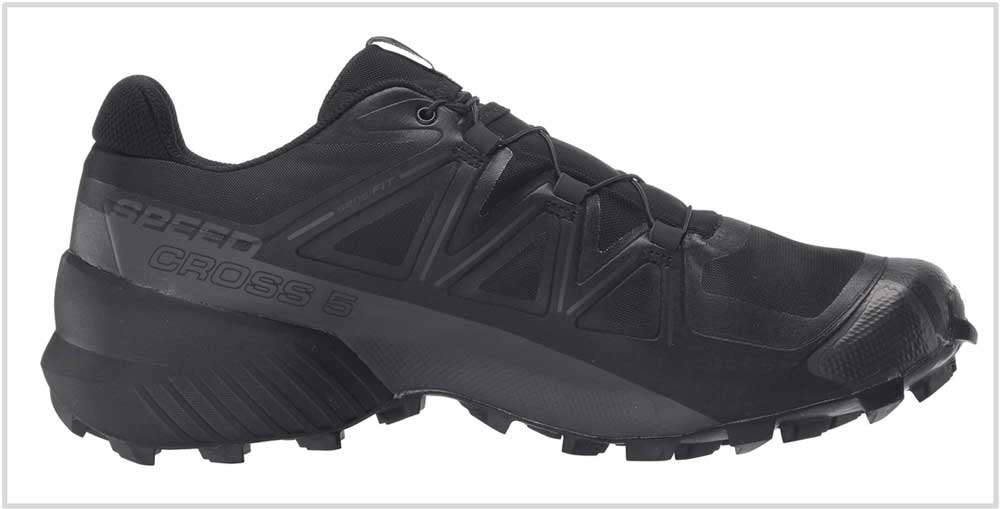 Yes, it’s pretty obvious – the Speedcross 5’s outsole has deep lugs made of a sticky rubber compound that offers a great grip on slush and snow. But there’s more to the Speedcross than first appearances.

The slim outsole profile distributes the pressure over a smaller area – thus improving the bite on the trail. The midsole is also double-lasted, meaning that the upper wraps the midsole for superior lock-down.

Lastly, the Quicklace upper secures the foot and keeps it closer to the ground for a better power transfer.

We were pretty clear in our detailed review of the Saucony Peregrine ICE – this shoe has a sub-par grip over iced surfaces. This is one of those products where the marketing hype got ahead of itself.

However, we have to give credit where it’s due. The Vibram Arctic Grip has a phenomenal grip over wet surfaces that isn’t frozen. The sandpaper-like texture of this special rubber compound is what does the trick over otherwise slippery surfaces.

The foam midsole has a comfortable ride, and the closed mesh upper does a decent job at repelling moisture and what not. 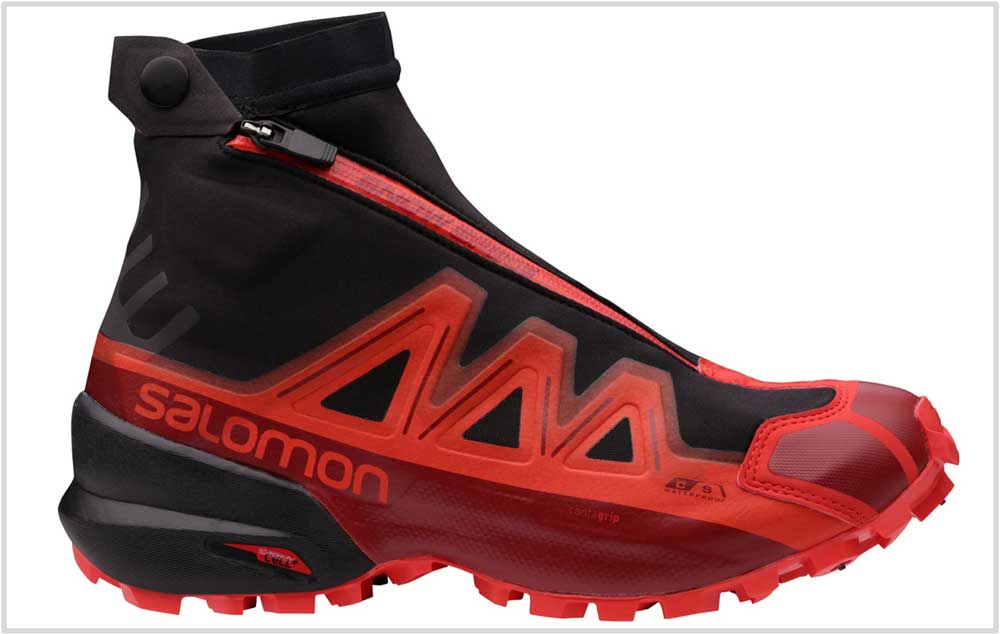 The Salomon Snowspike CSWP is the nuclear option for winter running when all other alternatives have died trying.

The name of the shoe should give it away, but if you’re still clueless, we’ll break it down for ya. Not only does the outsole have point rubber lugs for grip on slush, but it also has 11 Tungsten Carbide spikes for the ultimate in winter-ready traction.

These spikes bite into frozen surfaces where ordinary rubber cannot, thus vastly improving the safety when the pavement is either snow, ice, or both.

There’s also a waterproof upper and a comfortable midsole that goes on top of the spiked outsole, so this is a complete package. We tested the Snowspike over several months before writing our review.

When you make a purchase using the retailer links in our reviews, we may earn a small commission. Solereview does not publish sponsored content nor receive free samples. We usually buy products at full retail price.
As an Amazon Associate, we earn from qualifying purchases.