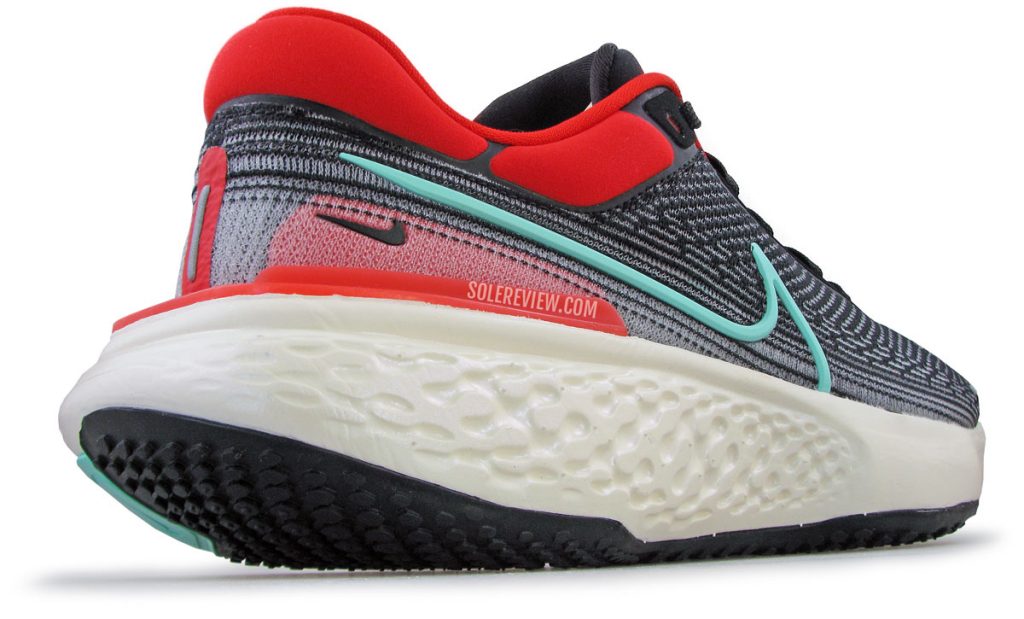 This article has been updated with current models for July 2021. The New Balance 1080V10 has been replaced with its updated version. The Asics Nimbus 23, Nike ZoomX Invincible Run, Saucony Endorphin Pro V2, and UltraBoost 4.0 DNA are new additions. The Hoka Clifton 7, Saucony Triumph 18, and Ultraboost 20 have been removed. The introduction is mostly rewritten.

The term ‘softness’ isn’t set in stone – or should we say, foam. A shoe’s place on the softness scale is a fast-moving goal post that depends on which cushioning technology is the flavor of the day.

Not long ago, the likes of adidas Boost, Nike React, and Saucony Everun occupied the top spots on this curated list. While there were exceptions like Hoka and Brooks, models like the Ultraboost were the go-to shoes if one desired a soft ride.

The introduction of PEBA foam-based midsoles has flipped the meaning of ‘soft’ on its head. It began with the Nike Vaporfly 4%; later, brands like Reebok and Saucony came up with their versions of PEBA midsoles.

It’s a good thing that this list is about the ‘softest’ running shoes. That means that the quality of ride stability and transitions, while desirable, need not be prioritized.

On this guide, the Hoka Bondi 7 and New Balance 1080 V11 manage to balance all three attributes (softness, stability, transitions) reasonably well. However, the ride stability isn’t the forte of several other shoes like the Nike Vaporfly and Saucony Endorphin Pro.

Chances are, you’ll quickly scroll down to see which shoes are included in this guide.

When you do, the omission of the Brooks Glycerin and adidas Ultraboost 21 may come as a surprise. These two shoes are soft and comfortable, but this guide is about the ‘softest’ running shoes – hence their exclusion.

Ideally, we would have loved to include the New Balance Fuelcell TC because of its super-soft and springy cushioning, but it appears to be in short supply at the time of writing this guide.

The adidas Ultraboost 21 has been redesigned with a firmer outsole, so the ride isn’t as soft as it used to be. That is why we have featured the ‘retro’ Ultraboost 4.0 DNA instead.

The terms soft, cushioned, and padded are often conflated. A cushioned shoe needn’t be soft. A padded shoe could be cushioned, but without being soft.

There are two qualifiers for a running shoe to be truly soft. At least, that’s how solereview defines it. First, the foam material should compress the moment it is loaded. Two, the midsole made of the said foam should be a high-volume kind. So while shoes like the Reebok Floatride Run Fast 3 and Asics Metaracer have a soft underfoot feel, their low-profile midsoles do not make the cut.

Softness comes in various forms, with some being better than others. The Nike Vaporfly and Saucony Endorphin Pro V2 demonstrate that ride softness and quick transitions can thrive together.

Taking the top spot here is the Nike ZoomX Invincible – an uber-soft shoe with an ultra high volume midsole made of PEBA foam.

The list is sorted in the order of our recommendation.

In our detailed review, we said that the Nike ZoomX Invincible Run Flyknit was the softest shoe we’ve ever reviewed.

It’s been a few months since we made that remark, and our opinion hasn’t changed. Compared to the other shoes on this list, it’s not even a contest. 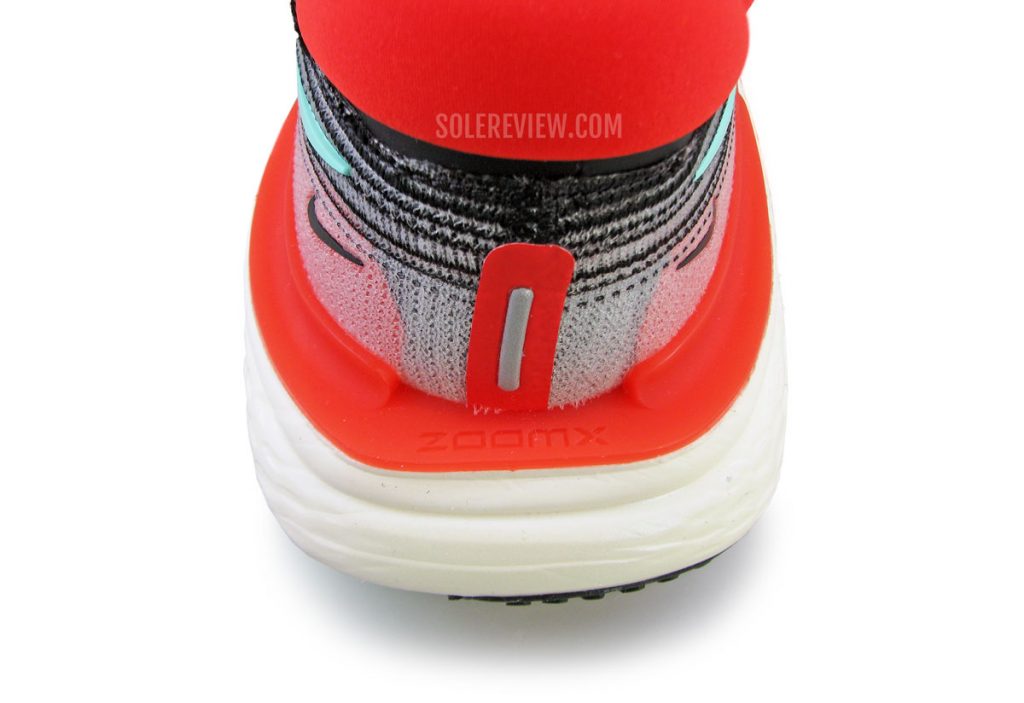 The volume of the ZoomX midsole is distributed vertically and horizontally – thus making sure that there’s softness available no matter where or how the loading takes place.

Even with a 9 mm heel-to-toe offset, the forefoot has ample softness as well – thanks to its 28 mm stack height. 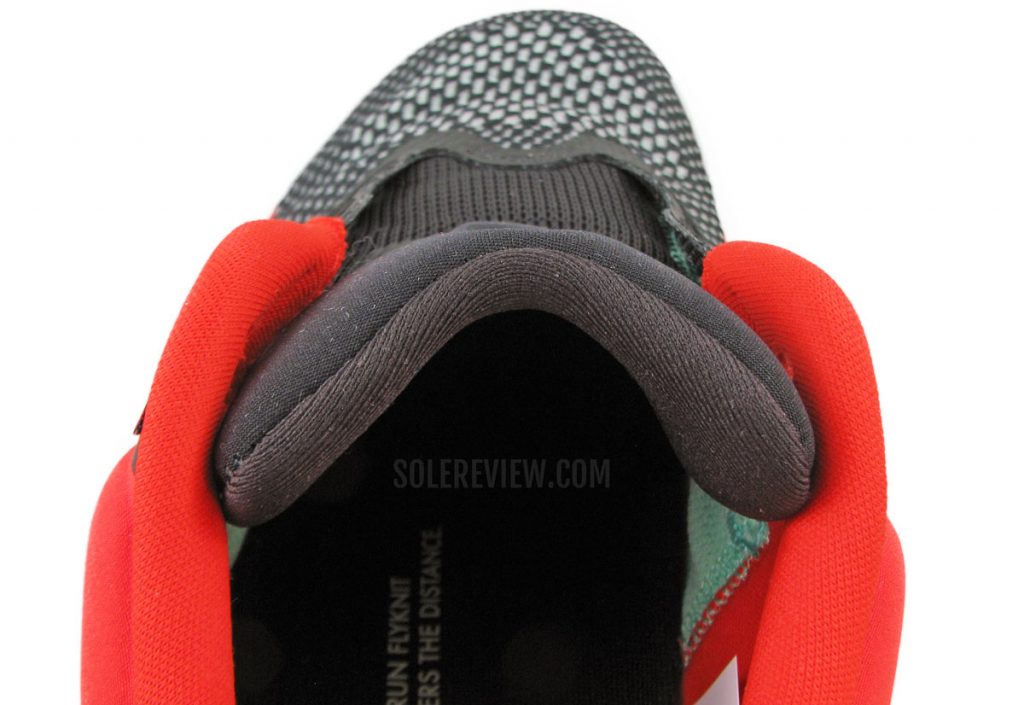 The upper comfort and plushness complement the soft ride well. The interiors are smooth and accommodating, and features like the padded heel and tongue make fit very comfortable.

There are limits to the Invincible Run’s capabilities. Reserve it for the easy runs or walks; faster runs and races are best left to the likes of the Nike Vaporfly Next% 2 or Saucony Endorphin Pro V2. 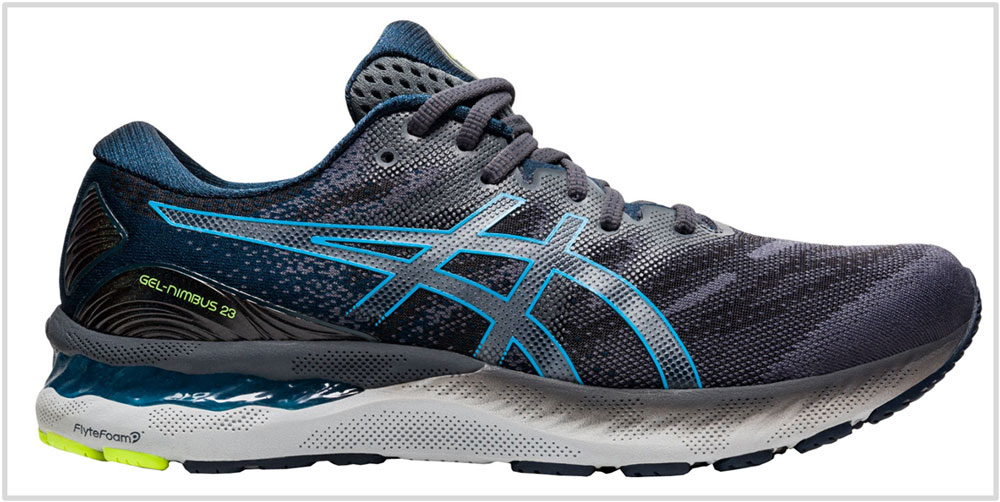 For a very long time, we wondered what a perfect Asics Nimbus should look and feel like. In our minds, the ideal version of the Nimbus had a plush, soft ride with an equally comfortable upper to match.

Finally, after a decade of false hopes, the Nimbus 23 is here. And it’s exactly how we imagined this model to be in its idealized form.

The dual-density Flytefoam midsole and visible Gel pad create a soft and plush underfoot experience. That’s further enhanced by the foam insole and lasting, and the blown rubber outsole also contributes to the forefoot padding. 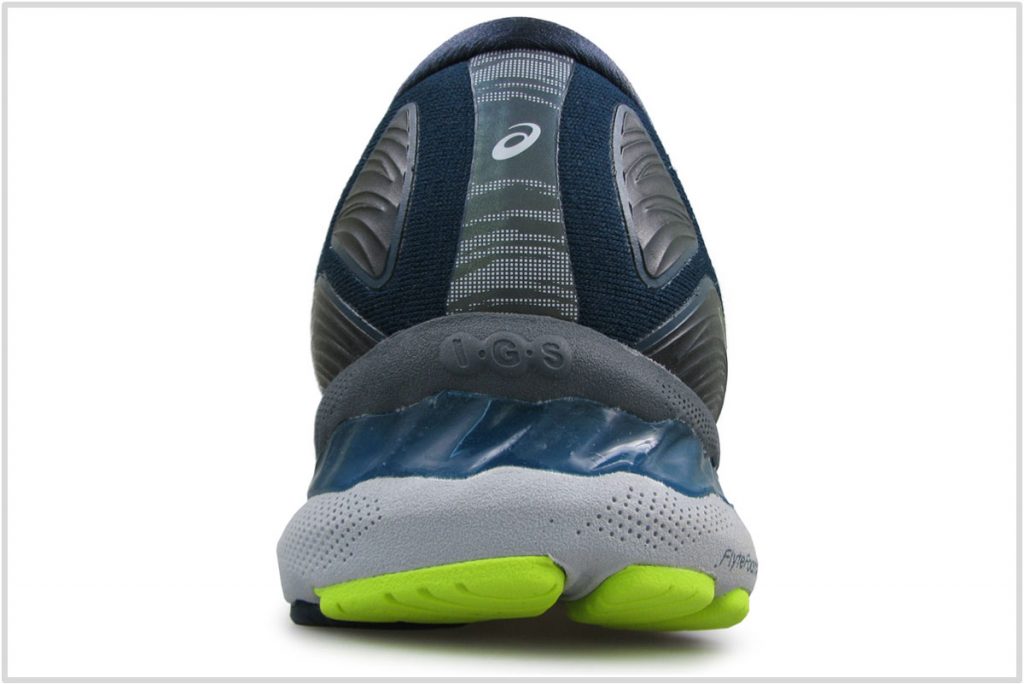 The single-piece knit mesh upper is smooth and super plush. The seamless exterior and the inner sleeve (new for Nimbus 23) add plenty of interior comfort.

This is an excellent shoe for long-distance runs at easy paces (6 min/km, 10 min/mile range) or casual everyday use.

This model is the second edition of the Nike Vaporfly Next% – the follow-up shoe to the excellent 4%.

The Nike Vaporfly Next % is a slightly modified version of the 4%, so there’re many similarities.

100% of the midsole is ZoomX foam, so the ride is supremely cushioned and responsive while weighing very little. We’ve also reviewed the Alphafly Next%, but we prefer the Vaporfly’s more consistent ride quality.

And just like the Vaporfly 4%, a heel-to-toe Carbon fiber plate gives the Next% V2 its characteristic snap.

The thin upper also helps cut down on weight, and its asymmetrical lacing is a clever way to reduce the top-down pressure. Though the V2’s upper is ‘new’, there’s not much change from the V1. The midsole and outsole stay the same.

Its softness doesn’t come at the cost of speed. The Next % is one of those rare shoes where the softness and ‘fast’ feel co-exist harmoniously. This makes the Next % an excellent long-distance running shoe; going far doesn’t mean punishing the feet.

Do keep in mind, however, that the rearfoot stability is lacking due to the softness. That was true of the original 4% as well, and even competing shoes like the Saucony Endorphin Pro suffers from this limitation. It’s not a drawback as long as the rearfoot isn’t loaded at slow paces. 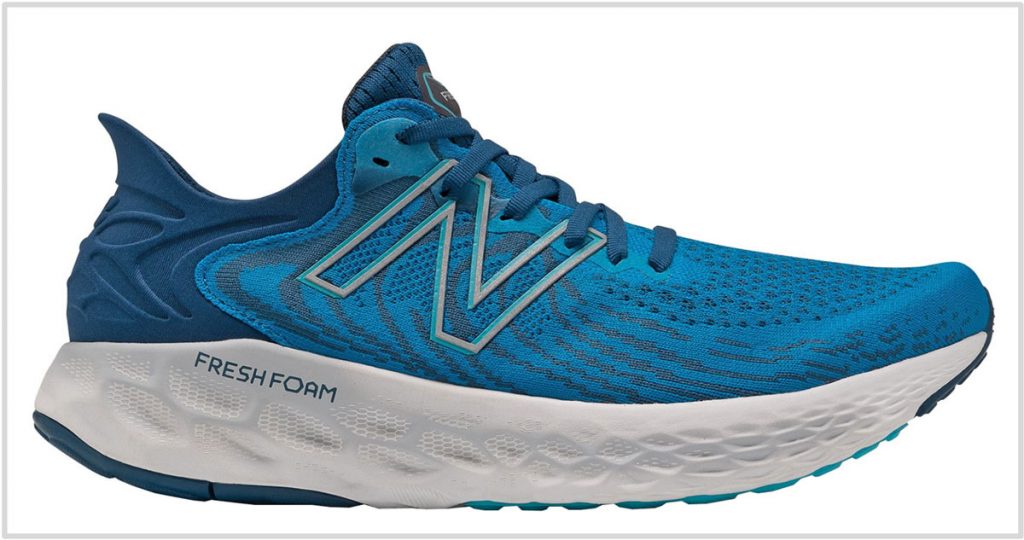 The Fresh Foam midsole is beginning to show its age, but it still delivers a softly cushioned ride with plenty of distance-friendly comfort. The Fresh Foam is based on EVA-blend foam, so it lacks the bounciness of PEBA-based foams, and even when compared to the New Balance FuelCell TC.

However, if it needs to remain relevant, future versions of the 1080s should switch to a new-gen foam like FuelCell.

Making the soft cushioning happen is a high-volume foam midsole and multi-piece outsole that cushions every foot-strike. Fresh Foam is an EVA foam variant, but that doesn’t stop it from delivering a ride experience that is both comfortable and lively.

Unlike some of the shoes listed here, the 1080 feels relatively agile for its cushioning class. In other words, the 1080 doesn’t feel slow and cumbersome to lug around. It weighs just over 9-ounces, so this isn’t a heavy shoe at all. The rocker-shaped midsole is good at making the transitions smoother.

The redesigned outsole makes use of independent slabs divided by flex grooves. The forefoot outsole is made of soft blown rubber, so this new geometry flexes together with the midsole to elevate the cushioning levels.

We love what New Balance has done to the upper fit; the knit mesh is soft, stretchy, and accommodating while delivering a secure fit. It comes in multiple widths as well.

If you were to ask someone to quickly name two Hoka shoes, we’re pretty sure that the Bondi and Clifton would be the answer. These models have been long-time ambassadors of Hoka’s maximal cushioning concept. There’s a good reason why a shoe like the Bondi has stood the test of time.

Here, the midsole isn’t pasted to an upper; it’s the other way around – the upper is an afterthought. The Bondi 7 is nearly all foam to ensure a healthy separation between the foot and the ground.

This cushioning thickness doesn’t come at the cost of running efficiency. As with most Hoka shoes, the rocker design of the midsole allows quick turnovers. So it is possible for soft cushioning and smooth transitions to coexist, after all.

The Bondi 7 has a lot of inherent stability; something that’s evident in how the shoe is designed. The midsole is thick and wide, thus making the ride very supportive. The rigidity of the midsole helps too.

The upper, while very plush, has additional features that add to the shoe’s overall stability. There’s a lot more structure over the upper; the forefoot, lacing panel, and heel are reinforced with overlays for support. The Bondi 7’s heel collar is also quilted with memory foam – something that’s new for this version. 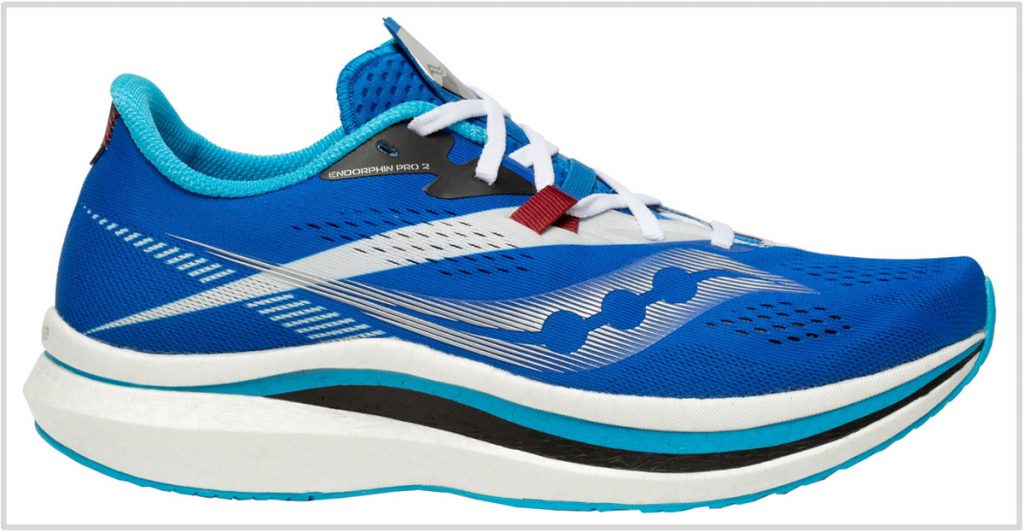 The Endorphin Pro V2 is one of two Saucony running shoes that use a PEBA midsole with an internal plate.

The other shoe is the Endorphin Speed, except that it uses a Nylon plate instead of a Carbon one. Since the Pro version lacks the fabric lasting under the insole, it is the softer of the two – and hence the reason why it’s featured here over the Speed model.

Saucony’s take on the PEBA foam midsole is interesting. Instead of a single block of molded foam, the midsole uses hundreds of fused foam globules. The result is a soft and bouncy ride that’s excellent for high-speed, long-distance runs in relative comfort.

Co-existing with the soft cushioning is a resilient quality that feels ‘tighter’ than the Nike ZoomX. A full-length Carbon Fiber plate makes the ride engaging by adding a snappy feel to the rearfoot while making the forefoot transition-friendly.

This quality is what Saucony advertises as ‘Speedroll’ – the rigid forefoot helps the foot roll quicker during the push-off phase. The rearfoot stability isn’t great, nor is the outsole grip – two things that a potential buyer needs to be mindful of.

The lightweight upper is well-ventilated with a comfortable, true-to-size fit. The Endorphin Pro V1 and V2 are very alike, and share an identical chassis – only the upper has been redesigned to include a midfoot strap.

And if you can get the New Balance FuelCell TC, that works too. It’s a softer shoe than the Endorphin Pro, and stabler too. 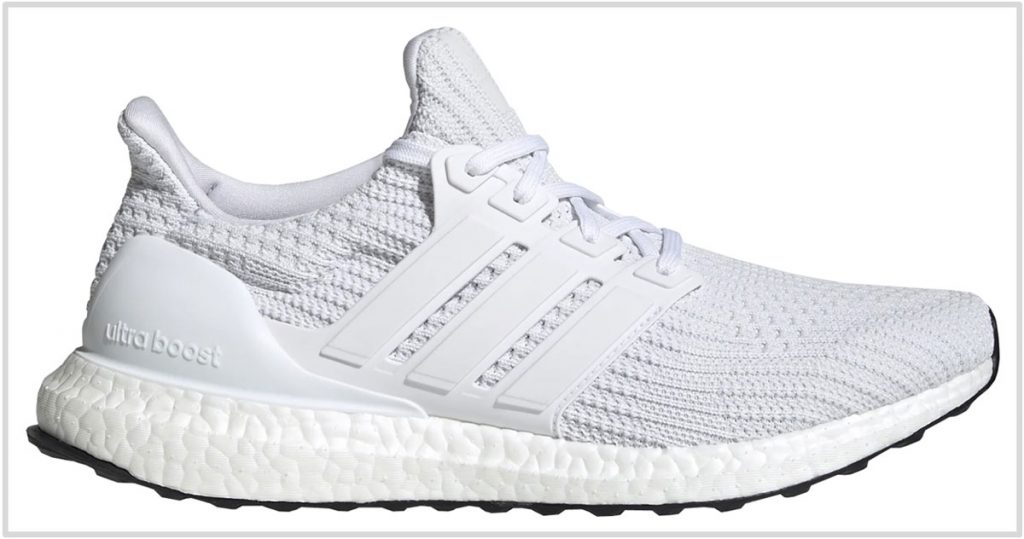 Oddly, the higher volume midsole of the latest Ultraboost 21 doesn’t necessarily make it softer than the previous version.

The stiffer outsole and larger Torsion shank make the ride more stable. That may be a good thing while running, but that dials down the overall softness.

Under the changed circumstances, we recommend the DNA variant of the Ultraboost if a soft ride is what you’re after. To be specific, the Ultraboost 4.0 DNA.

It uses (almost) the same midsole and outsole as the original Ultraboost. A full-length stack of soft Boost foam connects directly to the upper, with a cushy insole creating the layer of step-in cushioning.

The outsole design helps as well. Unlike the stiff geometry of the Ultraboost 21, the latticed layout of the Ultraboost DNA (with exposed Boost foam windows) does a better job of flexing along with the midsole. This helps make the ride softer.

Like the UB-21, the 4.0 DNA is best used as an athleisure shoe or low-intensity running. Though the stretchy upper covers the foot in a soft and snug fit, the midfoot cage isn’t ideal for high-mileage runs.