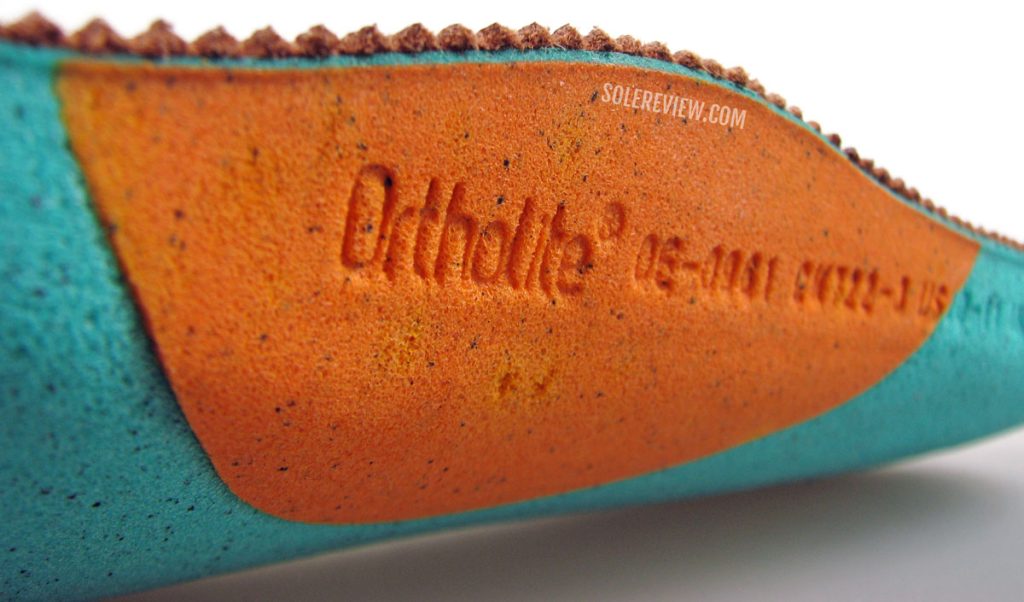 This article has been updated with current models for November 2022. The Saucony Echelon 8 has been replaced with its updated version. The Brooks Beast 20 is a new addition. Except for the narrower ‘B’ width, the women’s models are identical to men’s.

As if buying running shoes wasn’t complicated enough, here’s another fun thing to do – finding a pair that can accommodate a custom orthotic or aftermarket insole.

There are hundreds of running shoe models in the market. So how do we find a spacious shoe to accommodate a thick insert without severely affecting the fit and ride dynamics?

The shoe-insole compatibility also depends on whether we’re talking about an all-foam orthotic or structured insole with a rigid frame.

So what happens if an overly cushioned or structured insole is inserted into just any running shoe?

If the existing (stock) insole is thinner than the incoming orthotic, then the upper fit changes for the worse.

A thicker insert will push the feet upwards to create a tighter and uncomfortable fit. The foot will also sit higher inside the shoe, potentially resulting in heel slippage and a tighter fit over the instep.

Off-the-shelf and custom insoles can be loosely classified into three groups. The first kind is a cushioned orthotic made of foam or foam-gel.

These insoles are designed to provide additional cushioning with optional arch support. A Spenco RX Comfort insole, or the Spenco Arch Cushion would be examples of this construction.

The second kind is a cushioned-support insole. Here, a soft foam base is layered over a supportive frame that’s usually situated under the midfoot and heel. This category forms the majority of aftermarket orthoses, with the Spenco Total Support being an example.

Corrective insoles are the third kind. If you’re familiar with the uber-popular Superfeet Green, then you know what we’re talking about.

Here, a rigid frame made from Nylon or TPE cups the foam layer. Technically speaking, even the first two insole categories can be ‘corrective’ from a functional standpoint. Having said that, rigid molded frames are less pliable than their counterparts made of foam or Gel-Foam hybrids.

An orthotic can be either thick or thin in any of the said categories. For instance, the Superfeet Carbon is a ‘corrective’ insert by our definition but its thinness allows it to be placed inside most running shoes.

A few things need to be considered when matching a shoe with orthoses. With the rare exception, most stock insoles provided with running shoes do not have a heel-to-toe offset. The insole thickness stays the same throughout its length; insoles are ‘zero drop’ components.

The same thing can’t be said of custom or aftermarket insoles. Many inserts have a higher heel, thus adding thickness to the overall rearfoot stack and altering the heel-to-toe drop.

Let’s say that we have a running shoe with a 4 mm heel-to-toe offset. However, if the aftermarket orthotic has a 4 mm heel drop, the combined heel drop will be twice the original stack. That’s worth keeping in mind when purchasing or custom building an orthotic.

An insert usually affects the collar fit, so the last lacing row – also called the heel-lock lacing or runner’s loop – should be utilized for an optimal fit experience.

The stock insoles of most $100+ shoes are thick enough to be replaced by foam-based cushioned orthotics or slim corrective insoles. 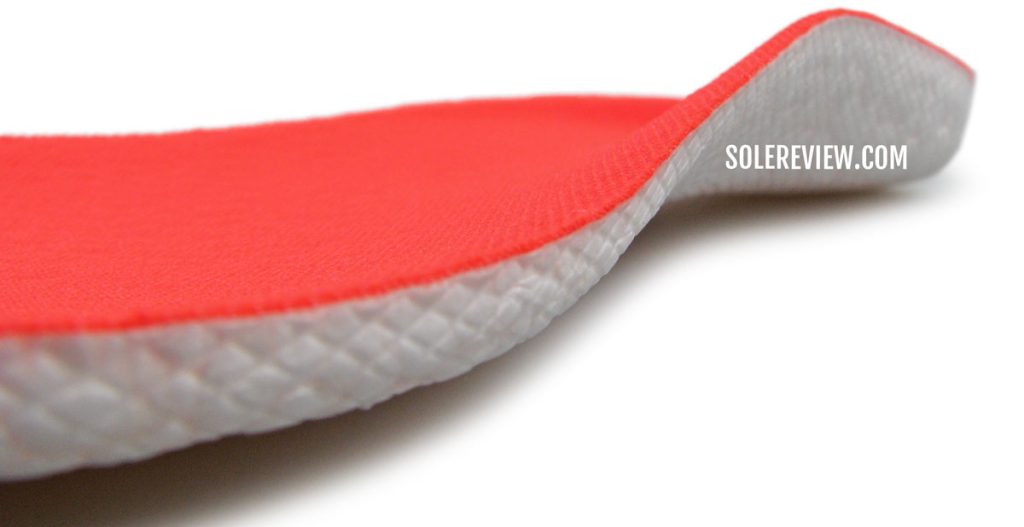 The Ride 15’s insole is made of Pwrrun+ E-TPU foam. It’s thick enough to be replaced by a stability Orthotic.

A recent development has suddenly turned some Saucony models into orthotic-friendly running shoes. Instead of the earlier set-up of a ‘Topsole’ and insole, models like the Ride 15 and Guide 15’s insoles are made of expanded PU foam that Saucony calls Pwrrun+.

These new footbeds are thick enough (around 8 mm) to be substituted with an orthotic.

The Brooks Beast 20 is the antithesis of modern running shoe design. It’s got a 12 mm heel drop and weighs nearly 12 ounces. It doesn’t use contemporary cushioning tech or hyper-lightweight uppers. At $160, it’s not cheap either.

And yet, the Brooks Beast is immensely popular. Its wide midsole, generous outsole coverage, and raised sidewalls (aka the Guiderails) live up to its ‘stability’ character. This is also a deeply cushioned shoe, thanks to the thick EVA foam midsole and removable insole.

The soft insole and roomy fit make the Beast 20 suitable for Orthotics. As long as the orthotic’s thickness doesn’t exceed that of the stock insole, the upper will fit as it should – without having to upsize. 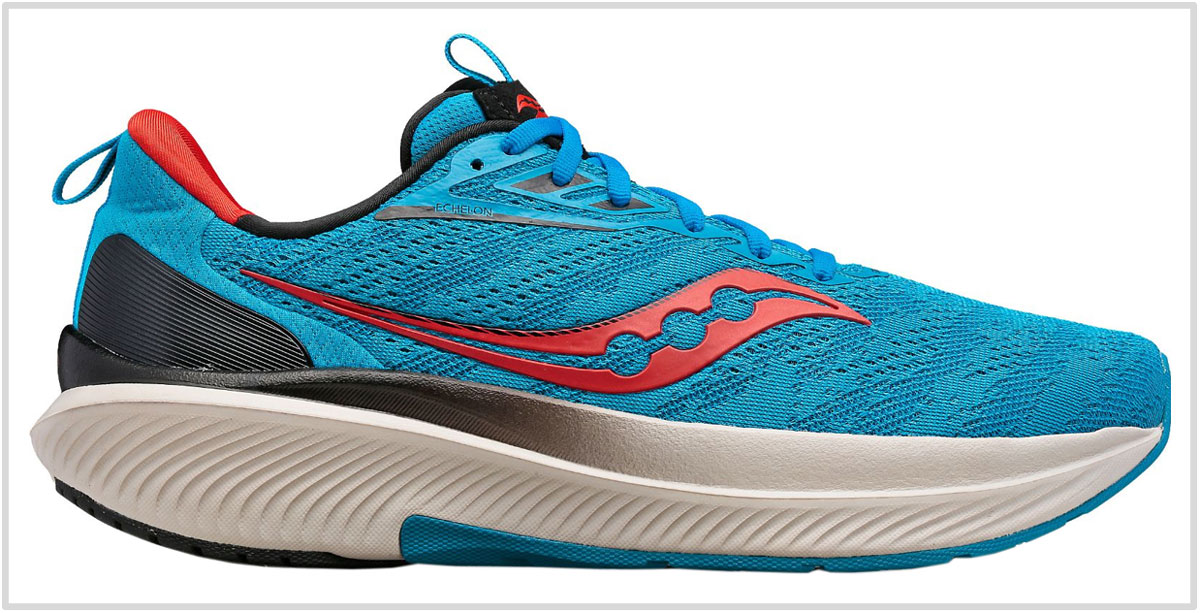 The Echelon is a stability shoe, but not the traditional kind. There’s no ‘stability’ feature like a medial post or raised midsole edges.

Also included is a thick PU sockliner that adds a layer of step-in softness. This footbed is thick enough to be replaced with an aftermarket or custom orthotic.

The Saucony Echelon 9 looks nothing like the Echelon 8. The V9 leaves the old-school design behind and adopts a visual language that’s similar to other Saucony shoes.

The 940V4 is a conventional stability running shoe – it has a large medial post on the inner midsole, plastic midfoot shank, and a ride quality that delivers stability through its firm cushioning. While the V4 is ‘lighter’ than the V3, it is still 13 ounces heavy.

Remove the thick stock insole, and there’s enough room to accommodate most orthotics.

The upper fit is an improvement over the V3. New Balance has replaced the clunky overlays with fused layers that make the interiors smoother and relatively spacious.

Except for the minor upper redesign, the Brooks Dyad 11 is very similar to the 10. The ride is identical due to the same midsole and outsole.

In sensory terms, we’d describe the Dyad 11’s ride as very supportive and cushioned – but with a firm undertone. The wide midsole produces a planted feel, and the full rubber outsole delivers smooth transitions with a good road grip. There are multiple flex grooves so the shoe isn’t as stiff as it appears.

One of the factors that make a running shoe orthotic-friendly is its spacious upper; the Dyad 11 passes that test. There’s enough room to accommodate slight changes in the insole thickness. It helps that the Dyad’s stock insole is fairly thick to begin with.

What is the Addiction GTS 15? It’s a supportive shoe with an ultra-wide midsole and outsole, but minus a medial post. The midsole uses raised sidewalls – aka the Guiderails – to cup the foot on both sides.

That’s all good, but there’s a reason why the Addiction GTS features here. Its spacious upper can comfortably fit an orthotic once the stock insole is removed.

The roomy upper means that the fit performance isn’t adversely affected after inserting an aftermarket insole.

The Ride 15 has been thoroughly refreshed for 2022, and a part of that transformation includes a brand-new footbed. Unlike the Ride 14 and prior, the insole isn’t made of EVA foam.

Instead, the Saucony Ride 15 has a responsive Pwrrun+ foam (E-TPU) insole. 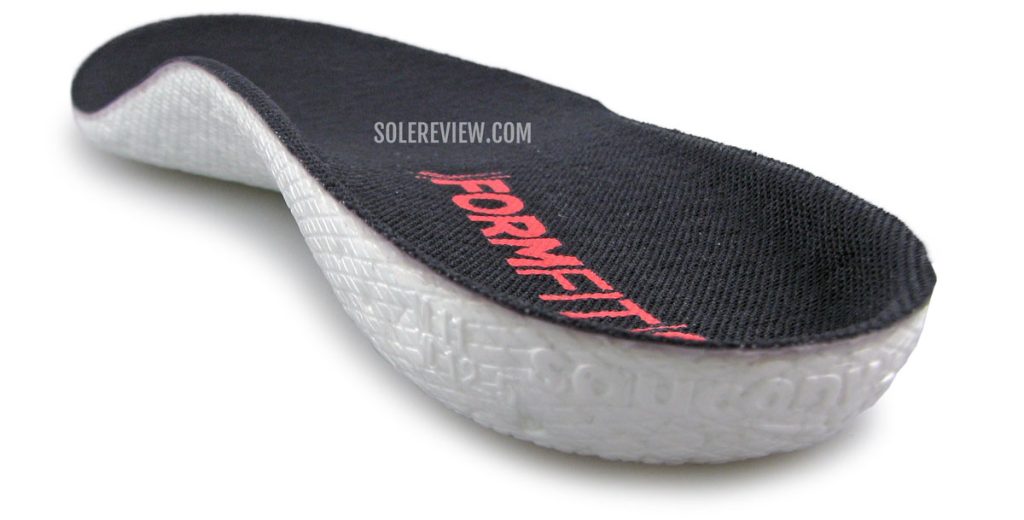 The removable insole is made of Pwrrun+, an expanded PU foam that’s similar to adidas Boost.

It’s thick enough to be replaced with an insole of your choosing, so that will not affect the upper fit. The upper also has more room than the previous model because of the lightweight mesh and updated interiors.

Despite all the changes, the Ride 15 continues to be an excellent neutral trainer for different use cases.

The taller foam stack and Pwrrun+ insole make the shoe more comfortable for high-mileage runs, whereas the firm midsole and rocker profile make the transitions efficient. Our review is here. 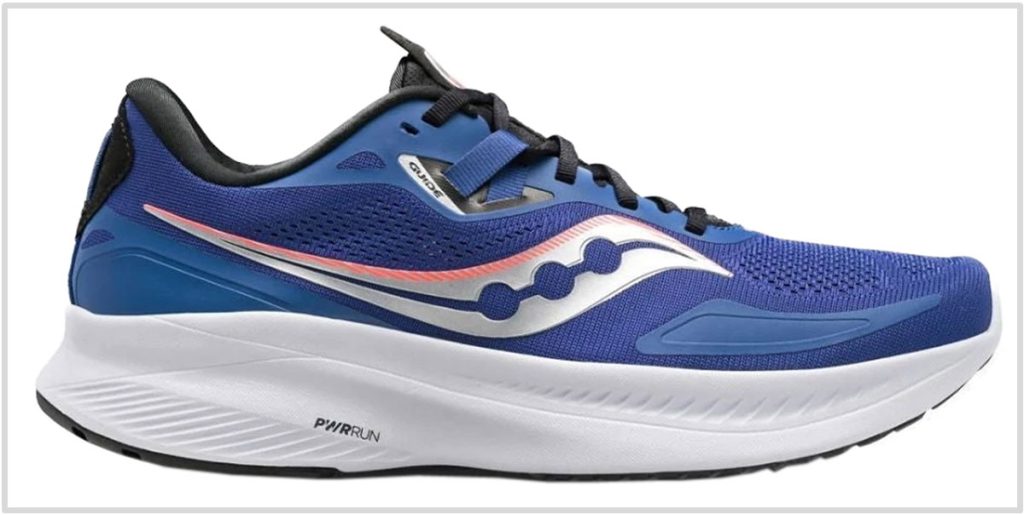 The Guide 15 is the ‘stability’ version of the Ride 15, but in the absence of a medial post, both shoes are somewhat alike.

For example, both share a similar design language – be it the tall midsole or the flush outsole geometry. Even the upper materials and construction appear similar from afar. 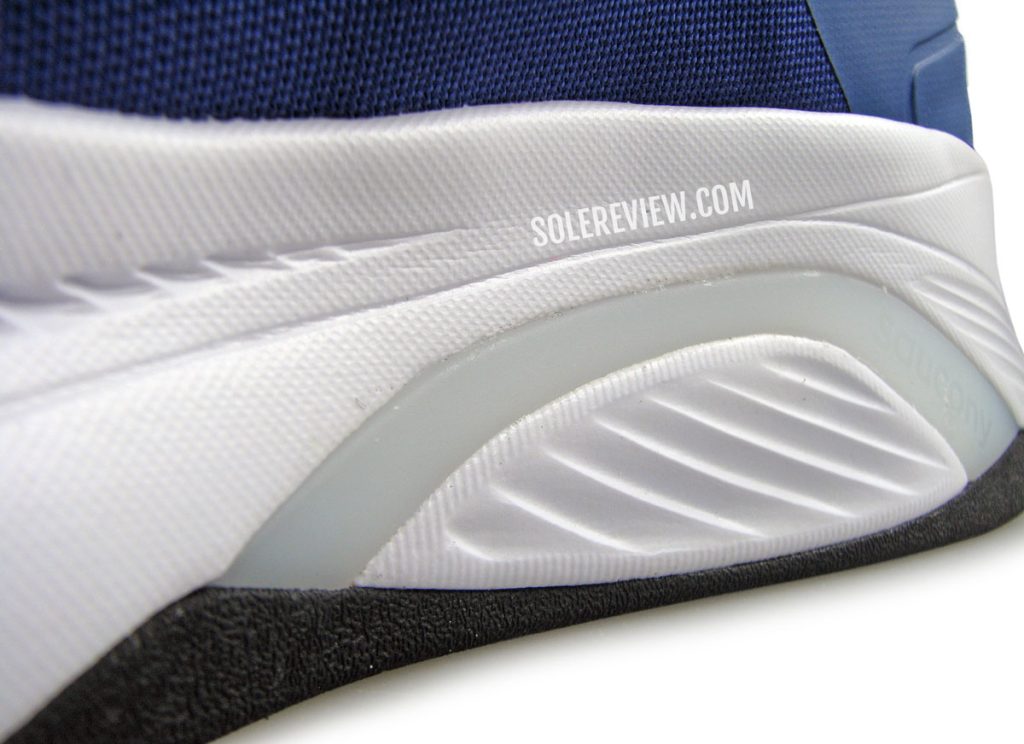 The stability device on the Saucony Guide 15.

They’re not identical though; the Guide 15 has a plastic support structure on the medial side. This feature adds stability to the inner midsole.

That being said, the Guide has a ‘supportive neutral’ character without any bias. Just like the Ride 15, the Guide is a versatile trainer that works for daily runs of various paces and mileage. 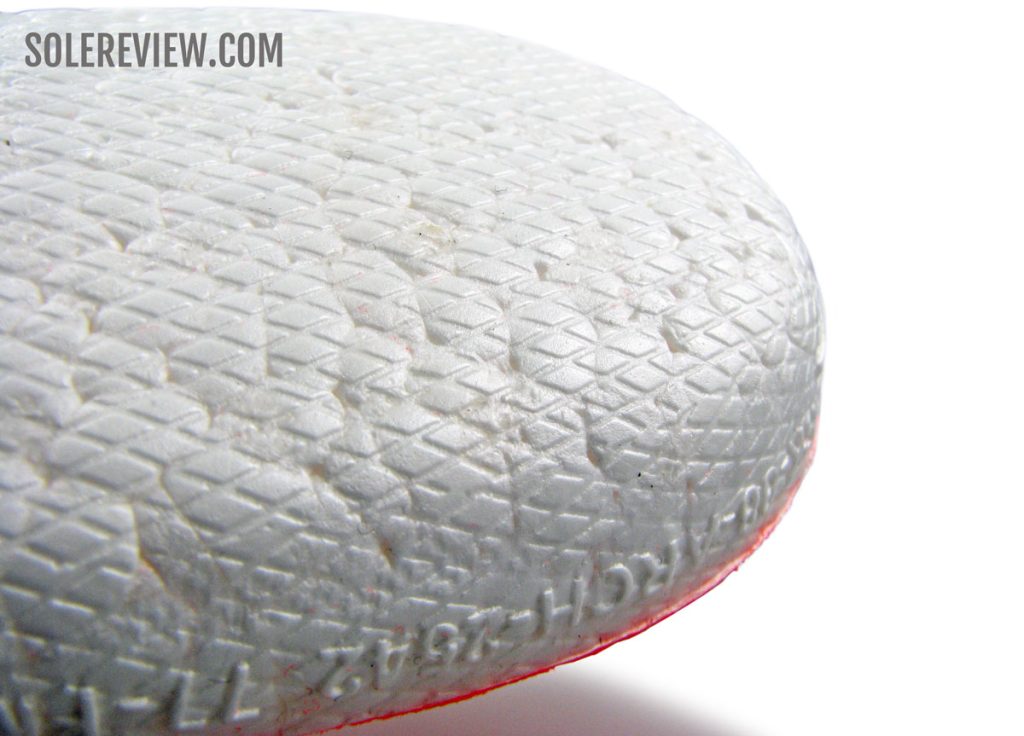 The Ride and Guide 15 both have Pwrrun+ (expanded Polyurethane) midsoles.

The removable Pwrrun+ insole is shared by both the models. This isn’t your regular EVA footbed, but a cushy layer of foam that’s thick enough to be replaced with an aftermarket Orthotic. Our comprehensive review has everything that you need to know about the G-15.