Not all sneakers look good in white. So when they do, that tells you something – it has passed the litmus test of style.

A white shoe, after all, is footwear design expressed in its purest form.

Here, the shoe does not rely on complicated cushioning systems or loud colors as a styling crutch. The use of clean lines, materials, and a bit of a backstory are substance enough.

The style simplicity also makes white sneakers a versatile part of the wardrobe. Much like a pair of blue jeans, these shoes effortlessly blend with almost anything you wear – business casuals and suits included.

Classic or retro silhouettes have another thing going for them. Some of the shoes have been around for more than half a century – they then turn into a lifestyle staple with widespread acceptance.

Unless of course, there is a bottleneck from a functional performance viewpoint.

For example, the Nike Air Force 1 is a heavy and bulky-looking shoe – traits which do not apply to other cupsole sneakers such as the adidas Superstar or Stan Smith. And skate classics such as the Vans Era or Authentic have plenty of comfort at a low price. It’s not that the Nike AF1 isn’t doing well – the new triple black AF1 is trending right now. Nonetheless, you don’t see many all-white AF1’s as compared to a decade ago.

Pricing is also what makes the classic sneakers popular. Most of the shoes retail below $100 – and the canvas models cost half of that. So for a relatively affordable price, retro sneakers offer an excellent blend of style, comfort, and durability – a standard which most shoes don’t easily meet.

And lastly, if you’re wearing a stylish white classic, it shows that you’re someone with a great taste in sneakers.

Most of the shoes featured on this guide are true vintage classics with a history spanning several decades. Except for the Cole Haan GrandPro sneaker and the Ecco Soft 8, that is.

The Cole Haan is here because some people want the classic tennis styling without the firm cushioning of the cupsole design. With its lightweight EVA cushioning, the Grandpro happens to be an excellent workaround for reducing weight and increasing ride comfort.

The Ecco Soft 8 sneaker is also here for a similar reason as the Cole Haan. Though not as lightweight as the Grandpro, everything about the Soft 8 feels so luxe, be it the soft leather upper or interior lining.

A distilled list of mere 14 shoes doesn’t do justice to the vast realm of white trainers. Thus, we’ve squeezed in a few under the ‘also see’ section.

Sorted alphabetically for your viewing pleasure:

Contrary to sneaker folklore, the original 1965 adidas Stan Smith wasn’t made for the namesake American Tennis player. It was designed in collaboration with the French Tennis player Robert Haillet. It was only in 1971 that this model got re-branded and was made popular by Stan Smith on the tennis court.

The storied legacy aside, the timeless appeal of the Stan Smith lies in its simplicity. This shoe was one of the first adidas models to feature a perforated three-stripes logo – a design element that kept the leather upper looking clean while improving breathability. The smooth leather heel lining and the padded tongue add lots of everyday comfort.

There’s plenty of grip, comfort, and durability in the partially stitched-down rubber cupsole. If you’re wearing one, it is assumed that you know your classics well.

The Stan Smith is excellent value for its $80 MSRP. A waterproof Gore-Tex version is also available for a $20 price premium.

The adidas Superstar is a case study in original influencer marketing – long before the era of Instagram.

The ’80’s Hip Hop band Run-DMC single-handedly propelled the SuperStar into a permanent hall-of-fame status after they proclaimed their love for the shoe in ‘my adidas’ single.

It’s not that this shoe was faring poorly before Run-DMC. The 1969 Superstar was a low-top version of a pro Basketball shoe, so it was packed with performance athletic features which made it very comfortable for its time. The visually clean upper and the distinctive ‘Shell toe’ only helped build its appeal with the mainstream.

But without the partnership which eventually followed, the Superstar would nowhere be popular as it is today.

Like the Stan Smith, the adidas Superstar is an affordable sub $100 classic which pairs well with practically anything you throw over it.

The Cole Haan GrandPro Tennis shoe brings together the aesthetics of a vintage on-court shoe with the comfort of a running shoe.

A full-length EVA foam midsole keeps the ride cushioned and the weight low; a garment leather upper and mesh lining wraps the foot in all-day comfort.

The Ox is the low-top version of the Chuck Taylor Hi, the oldest surviving sneaker model with more than a century of history. It’s been around since 1917, and in 1923 it took on the label of the namesake basketball player.

Though many revisions have been made to the design over the years, the CT retains the vintage rubber autoclave midsole and the basic lace-up upper.

And that’s one of the reasons why the Chucks have stood the test of time. The canvas upper is conforming and breathable; the rubber outsole and the foam insole make the ride comfortable and flexible.

The affordable pricing helps too.

This is one of Solereview’s favorite white classic sneakers. Though a canvas version of the Jack Purcell exists alongside, the leather version is something else. The upper is aesthetically minimal with no clutter at all – the white-on-white looks so pristine.

Named after the 1930’s badminton athlete, the Jack Purcell was originally owned by the Goodrich Rubber company. Like the adidas Superstar’s distinctive Shell toe, it is easy to identify a JP by its ‘smiley’ groove molded into the integrated rubber toe-cap.

Inside the shoe is a molded insole that provides plenty of step-in comfort. The rubber outsole looks flat, but it isn’t – the JP has near-invisible grooves ‘hot-knifed’ into the surface, hence making the shoe flexible and grippy. 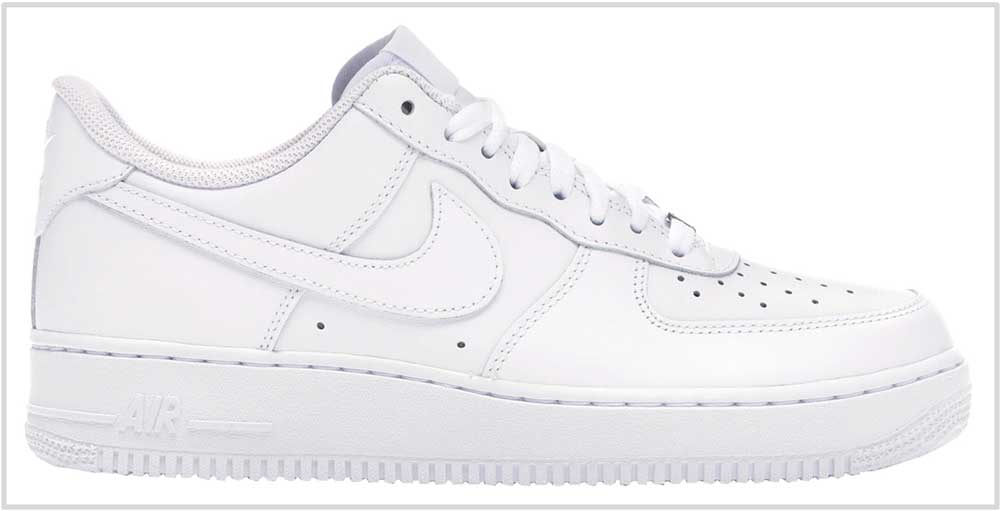 Admittedly, the white-on-white Nike Air Force 1 sightings are less common today than in its heyday, but this shoe resides permanently in the hall of fame. Like many others, the AF1 started its life as a performance basketball shoe before crossing over. The simplicity of its white all-leather upper has been a fertile canvas for thousands of custom paint jobs and collabs.

Despite its bulk, the Air Force 1 is a very comfortable shoe – thanks to the Nike Air bag embedded inside the rubber cupsole. The AF1 also happens to be one of the most durable sneakers on this guide.

On a side note, the triple black version of the AF1 is in vogue.

Its Forrest Gump fame aside, this classic Nike running shoe has an interesting backstory.

Nike is a $40B giant today, but back in the sixties, it was distributing shoes from Onitsuka Tiger, a Japanese company that would later be known as Asics.

The Cortez was based on the Onitsuka Tiger Corsair, a shoe that Nike was importing at the time. After their break-up with Onitsuka, Nike rebranded the Corsair with their logo. And since its launch in 1972, Nike has continued to sell it – making the Cortez the brand’s longest-selling shoe model.

As a whole, you’ll find more midsole cushioning and upper comfort on the Cortez over court-style classics, and that’s because of its running shoe origin. A die-cut EVA foam midsole adds underfoot softness; the leather and mesh upper is form-fitting yet comfortable.

Speaking of Onitsuka Tiger, here’s another vintage runner called the Tiger Mexico 66. This was the first model to feature the Onitsuka stripe (now the Asics logo) on the sides, and was endorsed by the Japanese athletics team at the 1968 Olympics.

The Mexico 66 was originally designed for sprinting, so its modern-day interpretation is a low-profile sneaker with minimal cushioning and a very snug fit. Given its minimalist build, this isn’t the sneaker to wear all day. Otherwise, it is a great style choice for the occasional outing.

If you’re from UK – or Europe – you’ll probably know the Basket’s popular cousin, the Puma Suede. The Puma Basket is the smooth leather version of the Suede and is a retro silhouette which, like many others, was originally a basketball shoe.

The distinctive Puma stripe makes the Basket distinctly recognizable from afar, and the textured midsole adds depth to the design.

The true-to-size upper has a heel lining made of smooth leather for comfort and easy on-off. If you want to add a color pop, you can replace the chunky white laces with a colored kind.

What’s common between a tube of Colgate toothpaste and a pair of Tretorn Nylites? At one point, both were owned by the Colgate-Palmolive company. That is not a made-up fact.

The interesting ownership history aside, no list of white sneakers is complete with a mention of the Tretorn Nylite. There is a good reason why Colgate Palmolive acquired the Tretorn brand in the ’70’s from its original Swedish owner.

First launched in 1965, the Nylite was all the rage in the ’80’s – it was worn on-court by Tennis greats such as Bjorn Borg, Billie Jean King, and Chris Evert.

There’s plenty of everyday comfort to be found in this basic canvas classic. The terry-lined heel and the tongue feel great over the fit, and the sizing fits true without being overly snug.

This 1987 reissue is traditionally board-lasted over an EVA foam midsole, so these run firm when compared to contemporary foam-based midsoles. That said, a terry-lined interior and insole make the snug-fitting upper comfortable.

But focusing on just the functionality is missing the forest for the trees. The ’80’s aesthetics look better on person than imagined, so give these retro sneakers a try – you might be pleased with the result.

If you’re not a fan of the all-leather upper, the Reebok Classic Nylon is a more breathable option that feels softer over the foot.

The whiteness of the slip-on upper distills sneaker design to its very essence. There’re no panels, laces, or embellishments of any kind – a few pieces of lined Canvas pieces are joined to an autoclave midsole.

Despite that, the Vans slip-on proved itself to be a superior skate and BMX shoe since its launch in the ’70’s.

The lace-free upper is easy to slip on and off, and the gum rubber outsole delivers a planted and cushioned ride. If you need more cushioning, then the Slip-on Pro with an Ultracush HD insole is absolutely worth the $10 upcharge.

The Vans Era is a perennial fashion favorite, and unlike many others, it wasn’t made successful due to product placement or influencer collab.

Rather, the timeless appeal of the Vans Era lies in its skate roots. After all, the same qualities which make a good skate shoe are also a part of a good everyday sneaker.

The basic canvas upper has the style versatility of a pair of jeans; performance features such as the gum rubber outsole and the padded insole add dependable traction and comfort.

The court-inspired Ecco Soft 8 costs twice as much as most sneakers on this guide. But when you feel the soft leather upper with its foam-filled tongue sit plushly over your foot, you realize that the money has been well spent.

Ecco directly injects a Polyurethane midsole under the upper, so there’s a lot more cushioning than traditional retro trainers. Fits true to size.