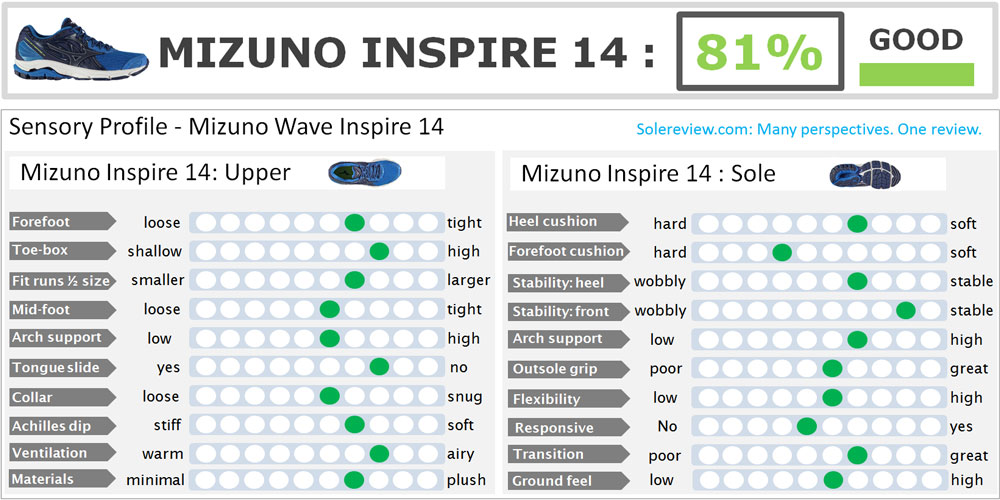 Mizuno’s marketing pitch: The Inspire 14 is stable but dynamic, fast, and fun to run with.

The Inspire 14 is an unconventional stability shoe - it has a supportive medial side but with a neutral-like ride quality. Updated for 2018 with minor fit and ride changes.
Balanced ride and transitions, roomy toe-box
The outsole is noisy, unresponsive forefoot, low reflectivity, the heel grip could be better 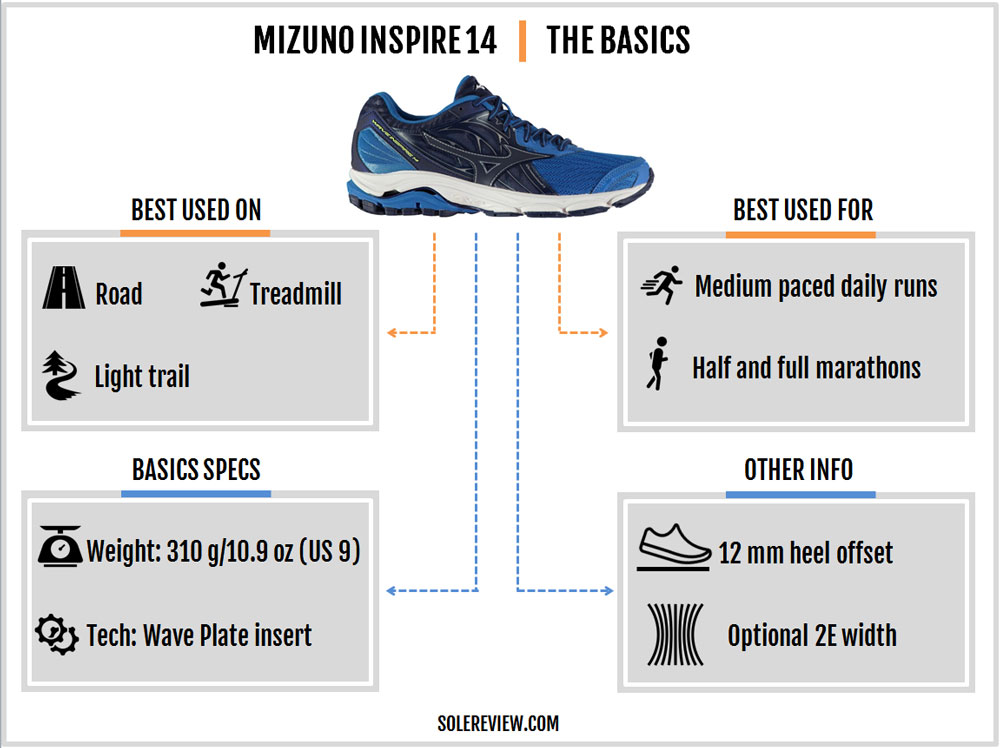 The Inspire 14 gets a brand new upper, midsole, and an outsole. But hey, it’s a Mizuno, so expect the expected.

Barring minor updates to the upper fit and the ride quality, the Inspire 14 retains most of its Mizuno-ness. For example, the Wave Plate and the midsole foam are stacked in a similar fashion as the 13, and that results in a ride character which feels familiar.

The Inspire is a ‘support’ shoe, yet far removed from others of its kind. Instead of a medial post, the Wave plate is designed so that the inner side is more supportive than the outer side. So the Inspire is supportive minus the feel associated with a regular foam wedge.

The ‘new’ upper uses the tried-and-tested combination of stitched and no-sew overlays over an engineered mesh. That being said, the Inspire 14’s redesigned forefoot leads to a small fit difference fit over the 13.

Mizuno is very consistent in design, fit, and ride experience when it comes to annual updates. There are exceptions though; the Sayonara botch-up from version 2 to 3 is a good example. Fortunately, the Inspire 14 is a chip off the old block with no upsetting changes.

Will things change for future Mizunos? Perhaps. If the Mizuno Waveknit S1 (and R1) is any indication, the upper design should evolve drastically in the coming years.

While we haven’t seen any signs of what the future beckons for Mizuno midsoles, the premise of combining a springy foam with the Wave plate sounds alluring.

If anything, replacing regular EVA with a bouncier foam will result in more feedback from the Wave plate while retaining the signature ride quality.

For now, it’s business as usual for Mizuno. 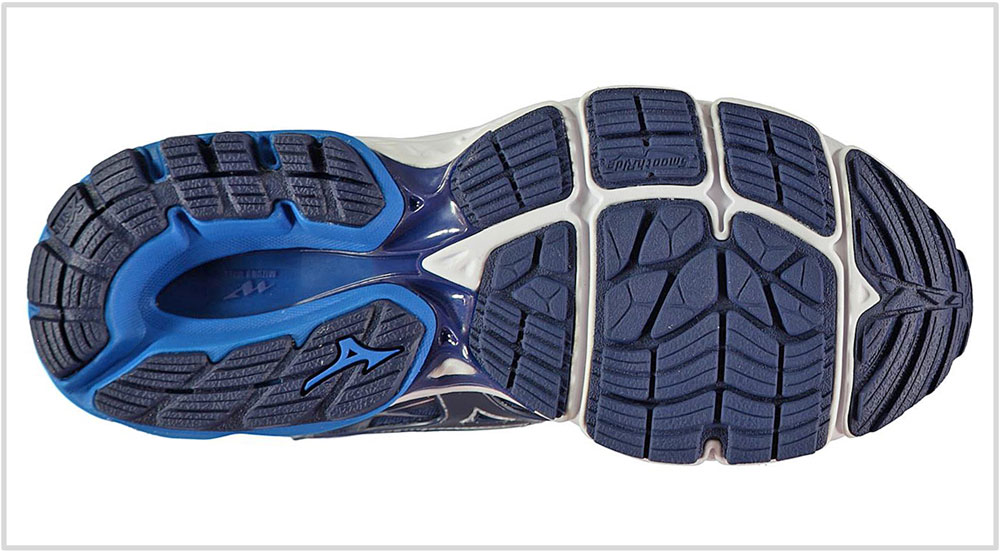 The Inspire 14 gets an updated midsole and outsole. But does that translate into a markedly different ride experience? The answer is no. Given the Inspire 14’s tried-and-tested construction, the ride quality carries forward much of the old.

There are two minor changes though. The forefoot has wider and unbroken flex grooves than the Inspire 12 and 13. This makes the Inspire 14’s forefoot more flexible.

The forefoot outsole is now designed with an extra slab of rubber. When combined with the updated flex grooves, the Inspire 14’s forefoot is better articulated as opposed to the sensation of a single block of outsole – which was the case with the 12 and 13. 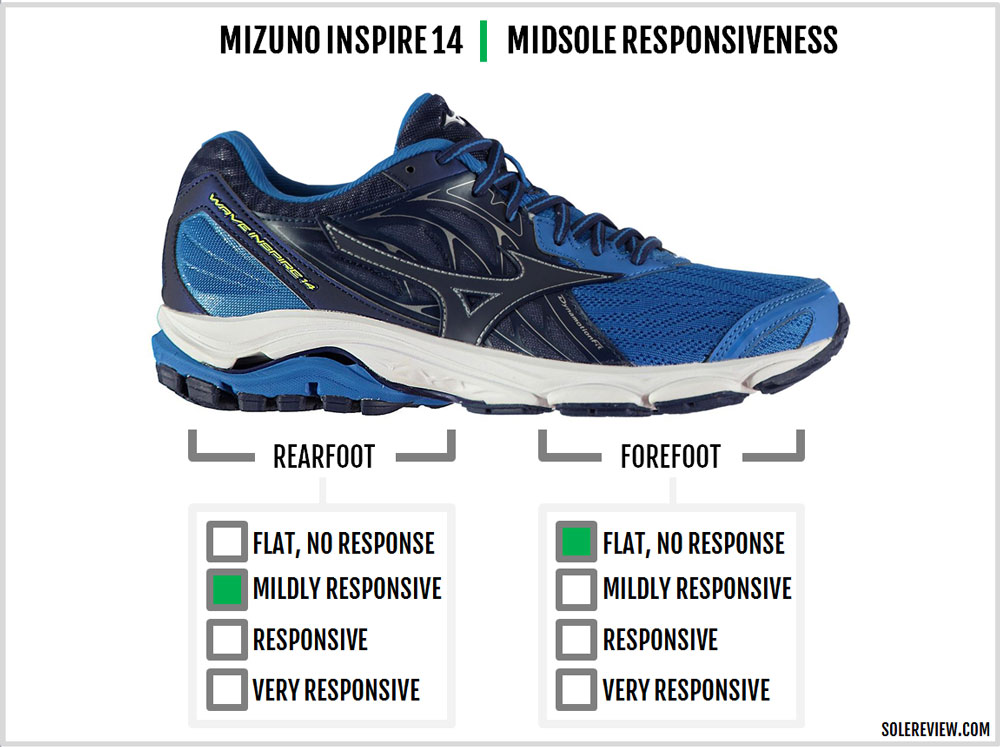 In the rear, the lateral side of the Wave plate has a slightly higher crest than the previous Inspire. As a consequence, there’s a slight increase in feedback from the Wave plate. The difference in responsiveness between the 12/13 and 14 is very marginal and only noticeable if one pays very close attention.

The heel cushioning is a bit softer than the 12 and 13. The redesigned outsole crash pad has a wider groove, and this heightens the cushioning feel on heelstrike. The outer edge of the outsole also gets notched, similar to how Brooks does it.

The Inspire 14’s cushioning is clearly rearfoot biased. There are four components working together here. That’ll be the main midsole foam, the Wave plate, and the softer foam piece located between the Wave unit and the outsole.

The removable insole acts as the cushioning layer just below the foot. It’s made of a soft blown foam which feels plush – at least for the first 100 miles of ownership.

Though the insole is comfortable, we prefer the plush top lining fabric of the earlier Inspires. The textile used on the Inspire 13 and 14 feel ordinary in comparison. 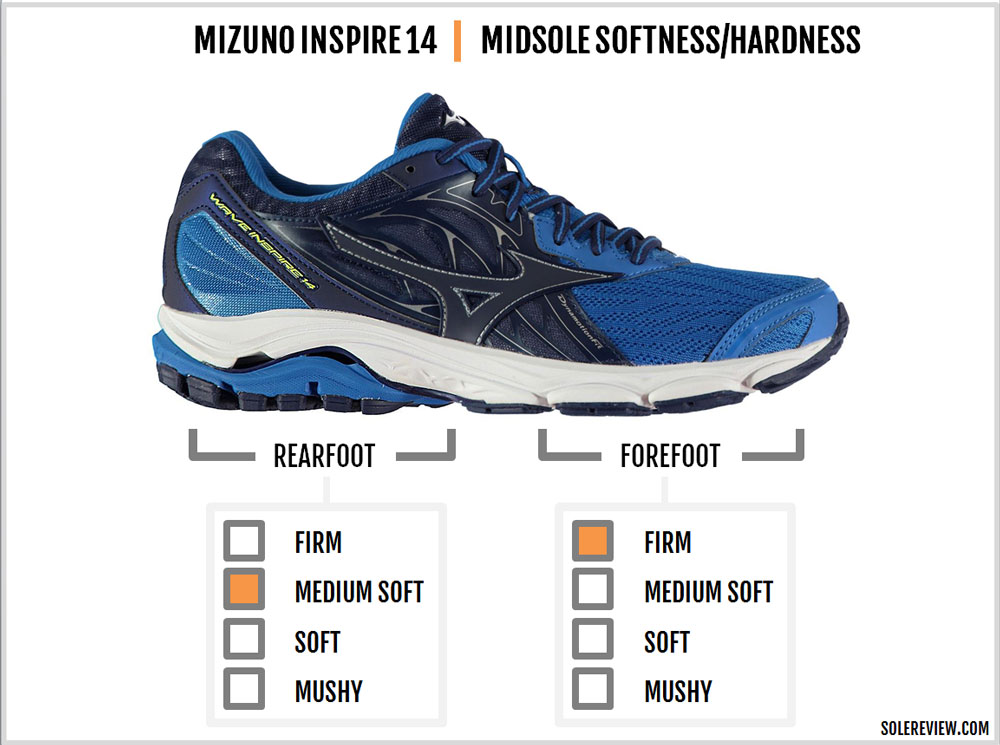 As a sum of parts, the Inspire 14 has a cushioning quality which borders on medium-soft to firm. Though the Inspire 14 is a ‘support shoe’, its level of cushioning softness compares with the Wave Rider 21. Both the shoes are competent daily trainers with enough padding to cover most distances.

It must be noted that all Mizuno running shoes will break-in after 75 miles or so. This (mostly) happens in the rearfoot where the foam layers bed-in over and under the Wave plate. The flattening of the foam insole is also a part of the said process.

Thus, the midsole will behave differently at mile 100 than it does at mile 0. For the lack of a better word, the ride ends up feeling ‘flatter’ in the later stages of ownership. This bed-in process is a rite of passage for Mizuno, so there’s nothing to be concerned about.

And how does the Inspire 14 perform from a support and transition angle?

We know that the midsole is devoid of a medial-post. So how does the Inspire deliver on its advertised trait – stability? The answer lies in how the plastic Wave plate is designed. On the inner (medial) side, the Wave plate has higher crests molded of a thicker plastic than the outer side. 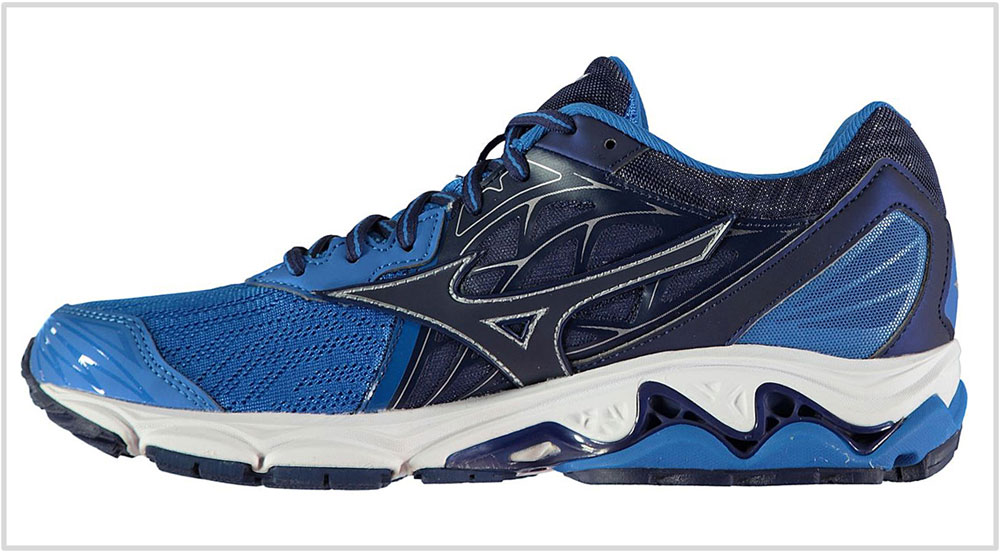 The Wave plate facilitates excellent rearfoot to midfoot transitions. The rigid Wave plate helps transfer weight without mushiness, and the firm forefoot helps cradle the foot. The forefoot has a sloped profile with a wide base which helps seat the foot better than most shoes in its class.

The somewhat firm ride and respectable sub 11-ounce weight give the Inspire 14 increased versatility over its peers. The ride quality feels sharp and focused during fast training runs. On the other hand, if slow and easy is your style, the Inspire works equally well.

Taking into account the unbiased ride character, runners who’re looking for a ‘neutral’ ride experience can also use the Inspire 14 as their daily trainer. 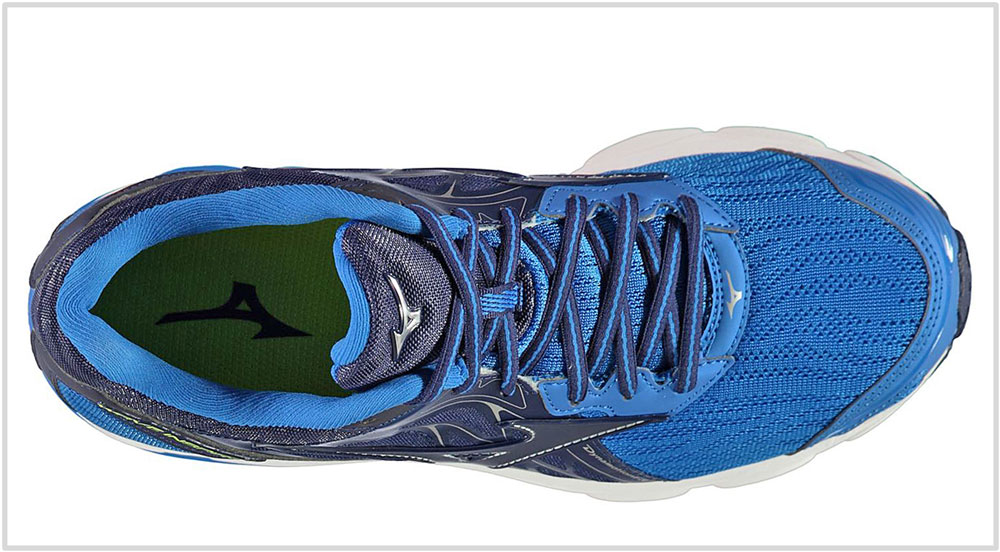 Mizunos have been known for their accommodating interiors, and the Inspire 14 doesn’t disappoint. The forefoot has decent levels of splay room; a high toe-box is included. 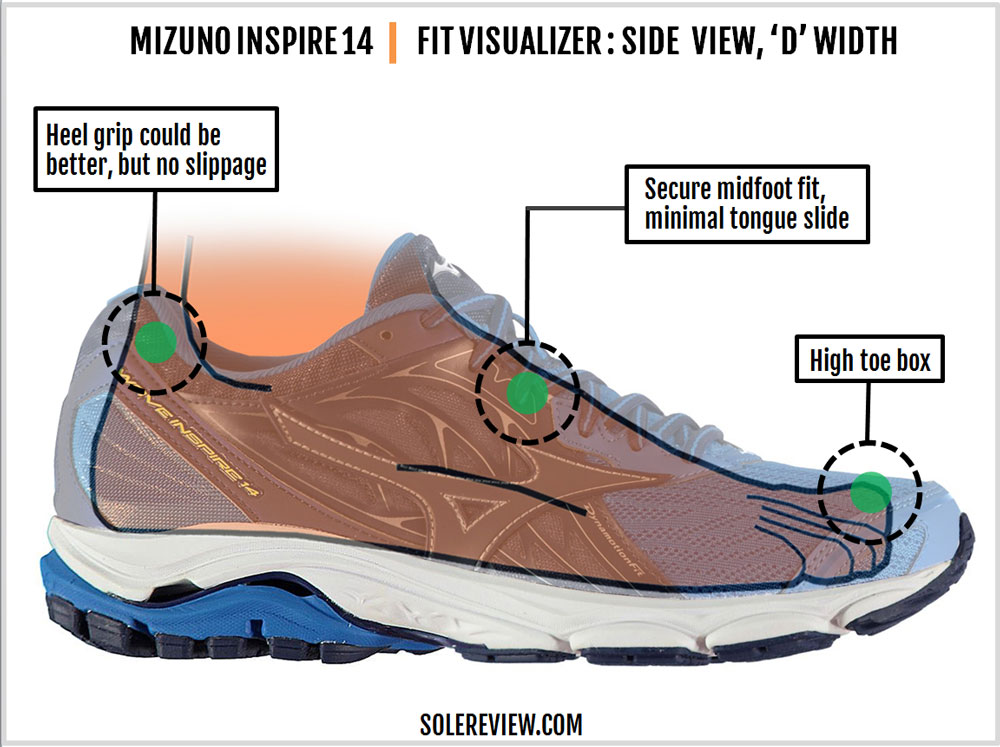 The medial (inner) side isn’t affected as much. The panel stops right at the midfoot-forefoot area, and there’s plenty of open mesh allowing the foot to splay.

The Inspire 14 has a wide toe-box, and more so than the 13. That’s because the stitched bumper is shorter on the outer side than last year. 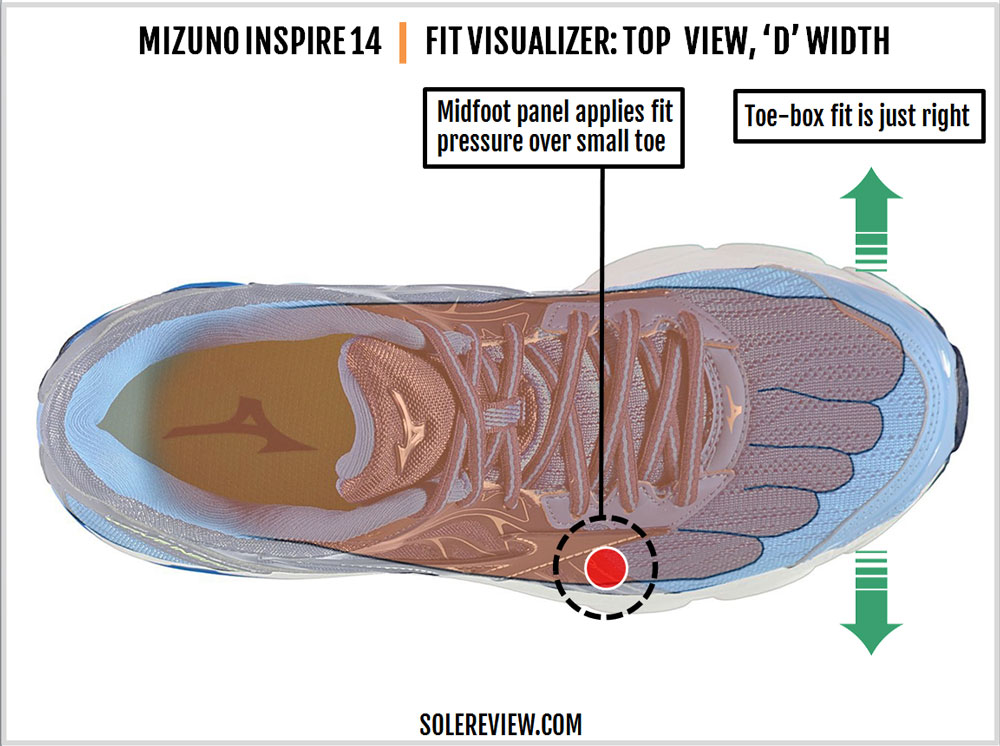 The rest of the Inspire 14 fits and feels familiar to the previous model. The heel has a hard molded counter with satisfactory grip levels. Historically, the Inspire (or most Mizunos for that matter) haven’t had generously padded heels.

If the Inspire happens to be your first Mizuno, then you’ll notice that lack of heel padding when compared to Brooks or Saucony. Otherwise, the heel lining is very comfortable due to the soft-touch fabric.

There’s no tongue sleeve, and yet there’s little slip. We decoded this mystery several years ago when we discovered how wide the tongue flap was. The wide tongue prevents it from sliding sideways – even without an inner sleeve.

To sum up, the Inspire 14’s upper feels a familiar place to be in. The upper is a mix of stitched and fused components, and typical Mizuno parts like the molded logos are a part of the Inspire’s design. The upper fits true to size with above-average levels of foot lock-down.

With the limited release of the Waveknit concept, it appears that things won’t stay the same for long. Mizuno’s abrupt transition from cut, stitch, and assemble uppers to a knit construction will result in interesting (and likely welcome) fit and feel changes. 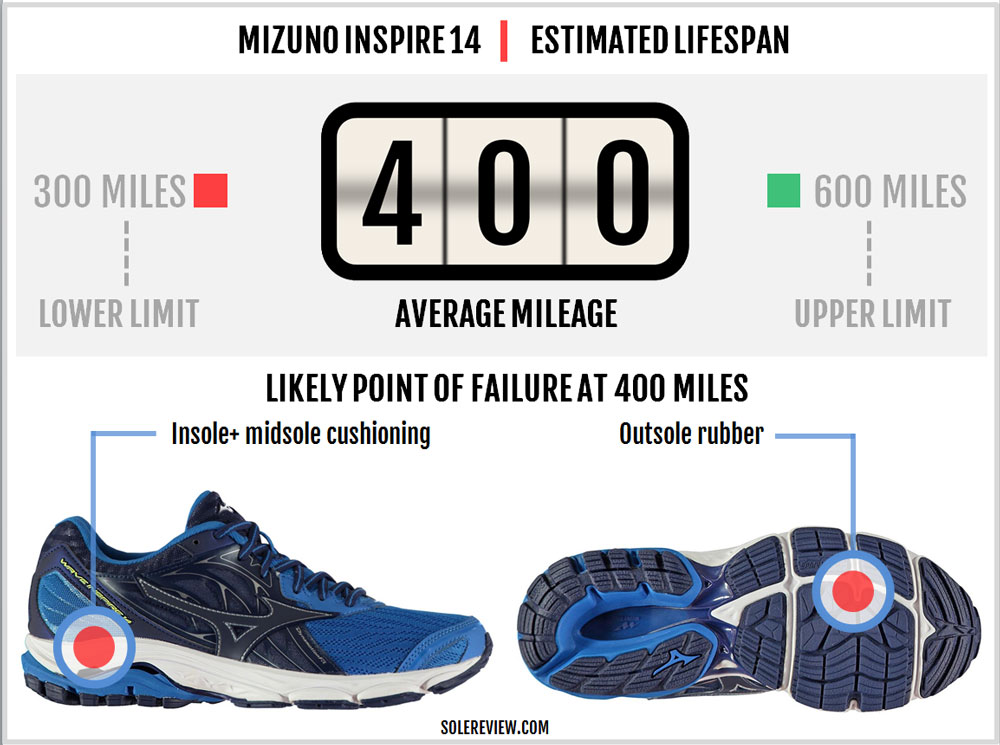 There’s only one thing you need to know about most Mizuno running shoes. There’s a required break-in period for the unique midsole design. After 75 miles or so, the foam will partially ‘bed’ into the Wave plate, and the horse-shoe shaped heel piece will flatten a little. The same will happen to the removable insole made of blown foam.

Mizuno loyalists are familiar with this quirk; new users might not. Just know that this is a well-known characteristic of Mizuno shoes.

Except for this occurrence, there’s little else to worry about the Inspire 14’s durability. 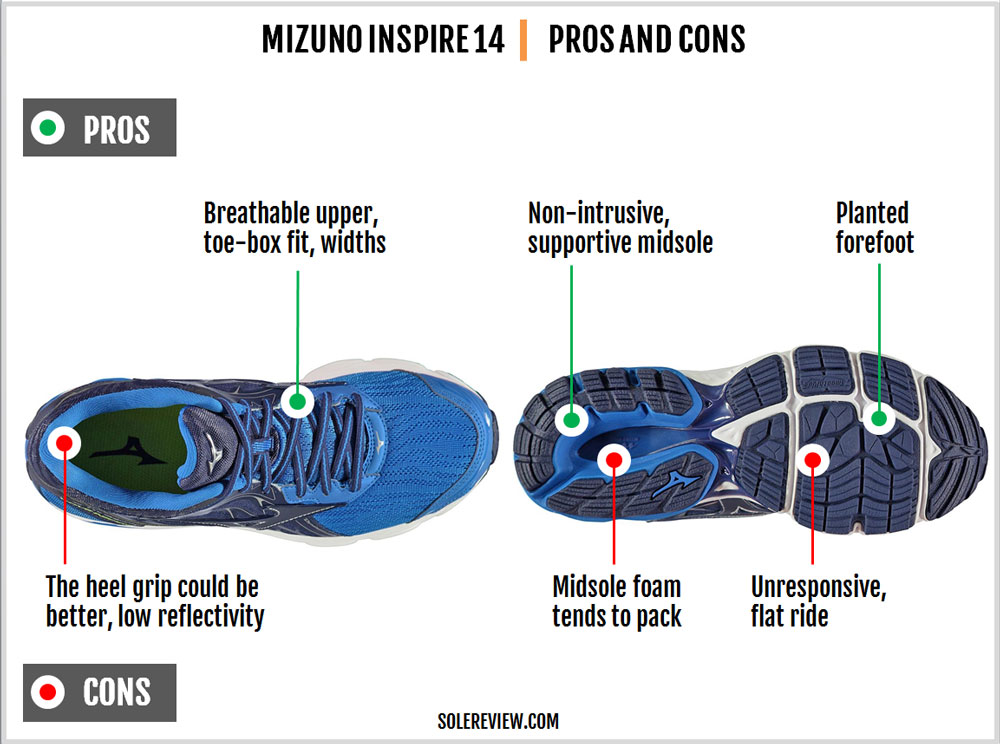 No matter the subjective likes or dislikes, there will be unanimous agreement on one thing – the Inspire 14 has a balanced ride with a smooth quality of transitions.

The Wave Plate equipped midsole is inherently stable as it keeps the foam stack in check. The forefoot has a wide flare along with a gentle inwards slope which keeps the foot seated. The forefoot firmness also makes the transitions effective.

Other positive traits would be the well-fitting interiors with the option of widths.

Potential improvement areas would be the heel grip and the level of reflectivity. The outsole tends to be noisy, but that’s a subjective thing. 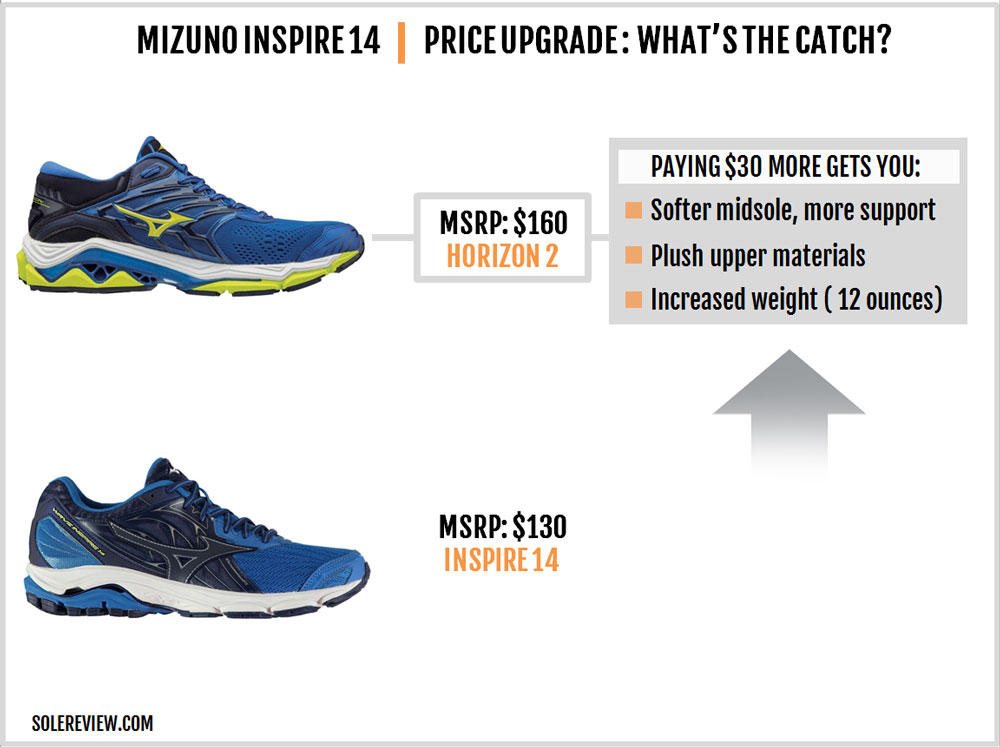 The Mizuno Wave Inspire 12 has decent amounts of cushioning. However, if it’s a plush fit and feel you seek, then the Wave Horizon 2 is available at an upcharge.

With the Horizon, you not only get a thicker foam midsole but a larger and longer Wave plate. The outer side has two wave ‘crests’ vs. only one on the Inspire, and the medial side has a more supportive Wave design. Given the differences, the Horizon has a softer ride than the Inspire.

The Horizon 2’s upper uses a material package which is noticeably more plush than the Inspire. This helps create a more comfortable and smoother interior environment. 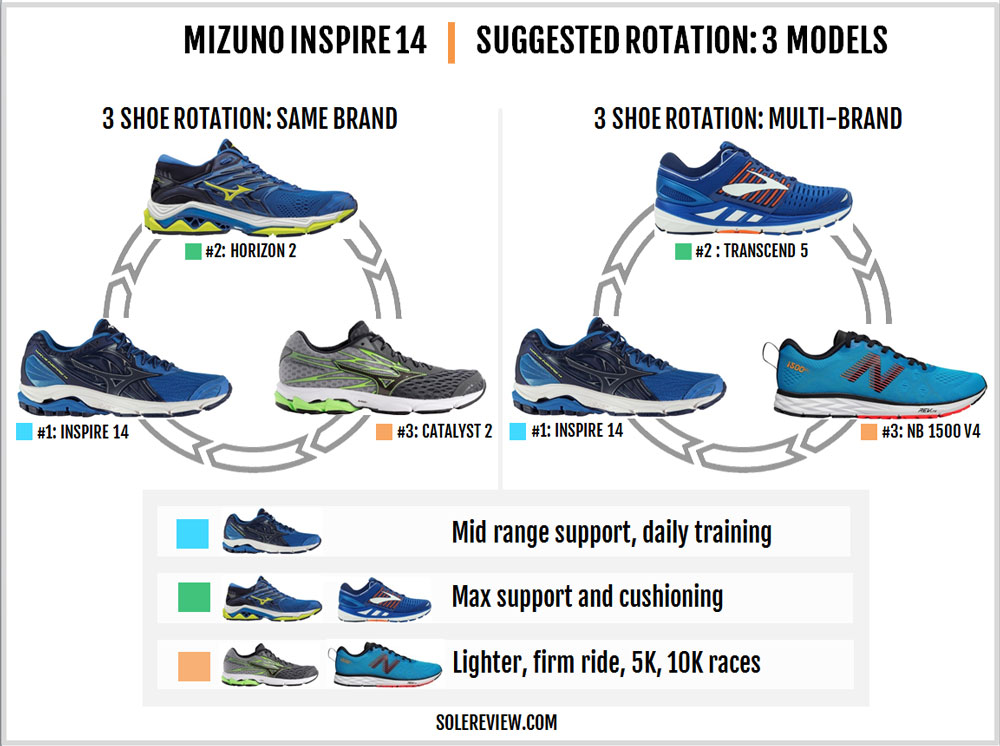 Most runners will do well with a two-shoe Mizuno rotation. Put the Inspire 14 to good use for daily training, and reserve the lighter Wave Catalyst 2 for fast runs and races. But if you want a plush support shoe, then the Wave Horizon 2 is a logical add to the mix.

Keeping in line with the Inspire 14’s mild-support character, the New Balance 1500V4 is a lightweight trainer/racer and the Catalyst 2’s equivalent. It has a cushioned ride with a barely noticeable medial-post. The 1500’s upper fit is excellent.

The Brooks Transcend 5 is a cushioned support trainer without a medial-post. If you’re not keen on getting a pair of the Mizuno Horizon 2, the Transcend is a worthy substitute. 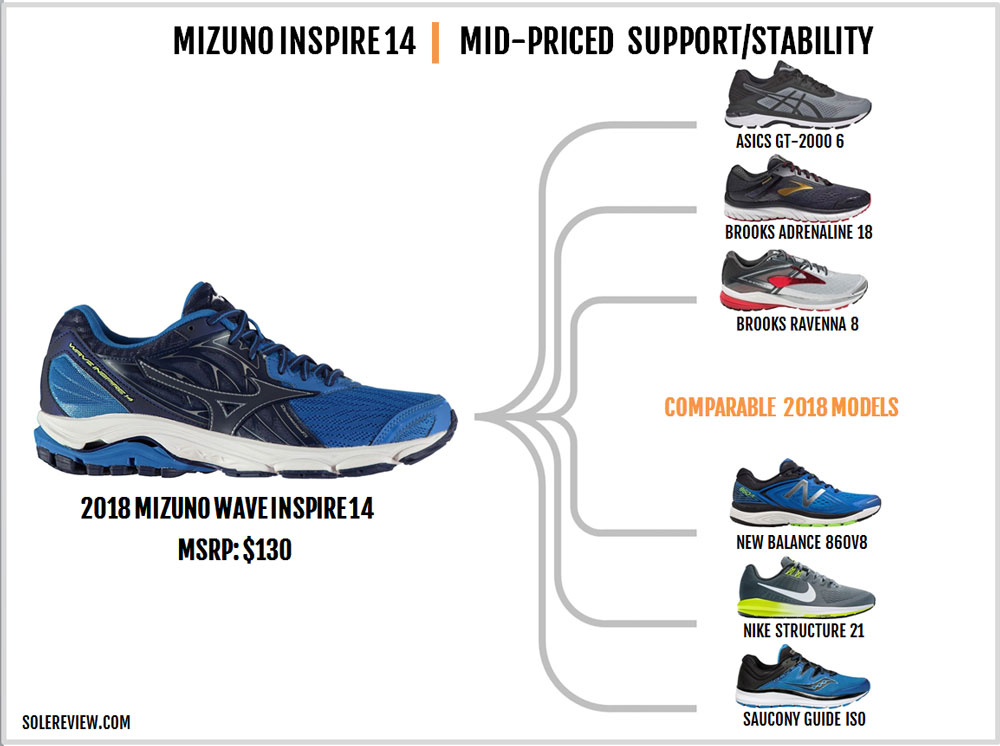 There are very few shoes in this category which do not have a medial post. Nonetheless, you can find running shoes where the stability thing isn’t overdone. The Brooks Ravenna is a mild-support shoe which compares with the Inspire 14 in spirit, if not in ride and fit character.

The others listed here are traditional stability shoes. The Asics GT-2000 6 has a medial-post paired with a Flytefoam midsole; the Brooks Adrenaline is a more supportive version of the Ravenna.

The Saucony Guide ISO is an excellent support shoe with a balanced ride, and so is the firm-riding Nike Structure 21. The New Balance 860V8 is as traditional as it gets. With its cut-and-stitch upper, plastic shank, medial post, and a multi-density midsole, the 860 reminds you of the days gone by.