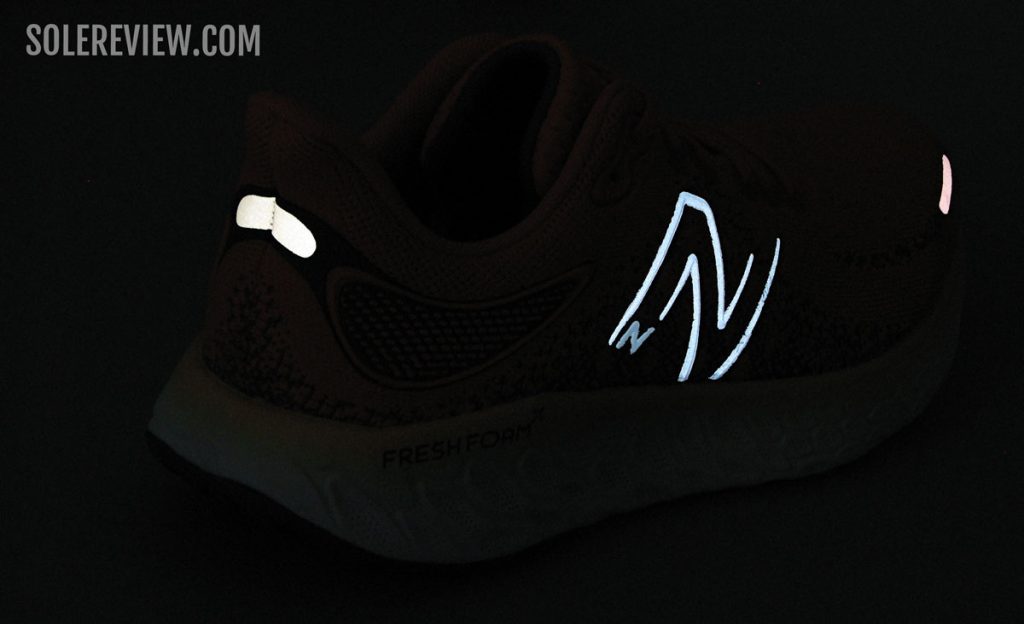 Many brands offer high-viz running shoes in their seasonal catalog but they’re nowhere close to 2013-14 levels. Asics is an exception; even their standard models perform very well from a reflectivity standpoint. Brooks isn’t bad either, and Saucony is gradually getting there.

To give credit where it’s due, Nike was the first to offer a seasonal assortment (Shield) of running shoes that combined high-viz elements with cold-weather features.

Nike sells the Pegasus 39 in a shield variant, so it’s included on this guide. The Pegasus 39 Shield has a wind and water-resistant upper, along with a grippy outsole. 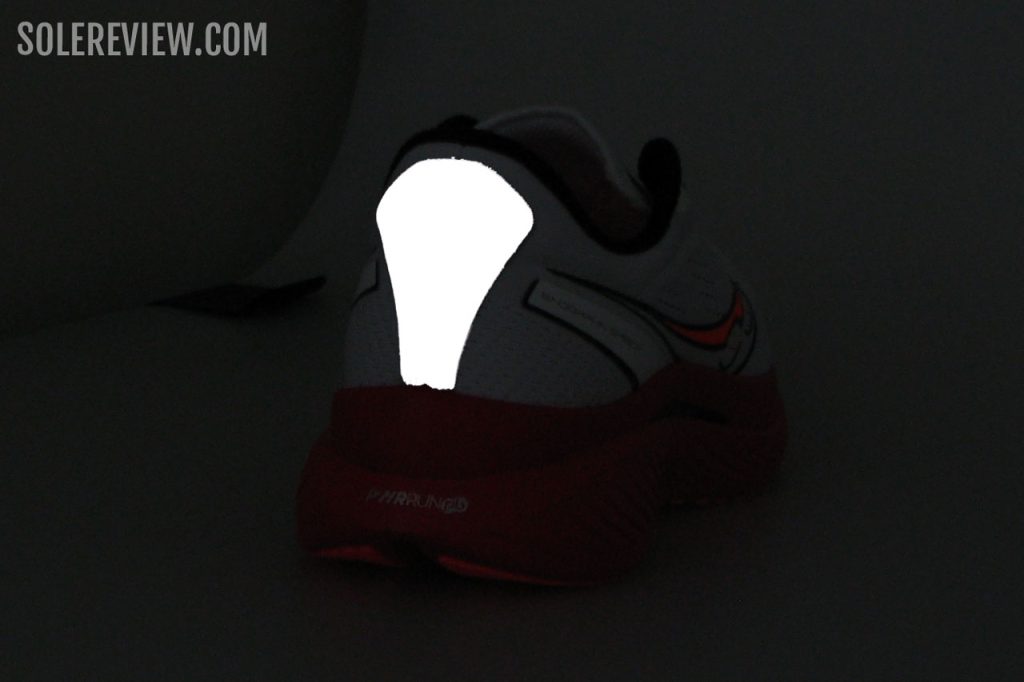 The Endorphin Speed 3 has a large reflective panel over the heel.

Asics has been selling a reflective pack called the ‘Lite-show’ for over 8 years now.

Everything about the Lite-Show assortment is reflectivity for running in the dark, which is a contrast to the winter-focused approach of Nike Shield. For example, most Nike Shield products are water-repellent and warm; Asics Lite-Show shoes are not.

However, Asics now sells the AWL (All Winter Long) variant in some of their popular models. These versions combine warm and water-repellent uppers with reflective trims.

Asics’ reflective running shoe strategy is to sell them perennially. You can find a Lite-show model at any time of the year – even if it isn’t the latest model.

The adidas is a hit or miss since it lacks a consistent strategy for its reflective shoes. Some adidas models have some reflectivity than others, but it’s like trying to find a needle in a haystack – those shoes are all over the place.

For this guide, we have included just one adidas product – the Terrex Speed Ultra. It also happens to be the only reflective trail shoe on this list.

Brooks introduced the ‘Run visible’ collection three years ago, and the Glycerin 20 is now available in a reflective variant.

We recommend getting something from the Asics Lite-show or Saucony Vizipro assortment. Most of the models – like the Nimbus 24 Lite-Show and Saucony Ride 15 Vizipro – balance everyday versatility with high-visibility elements. 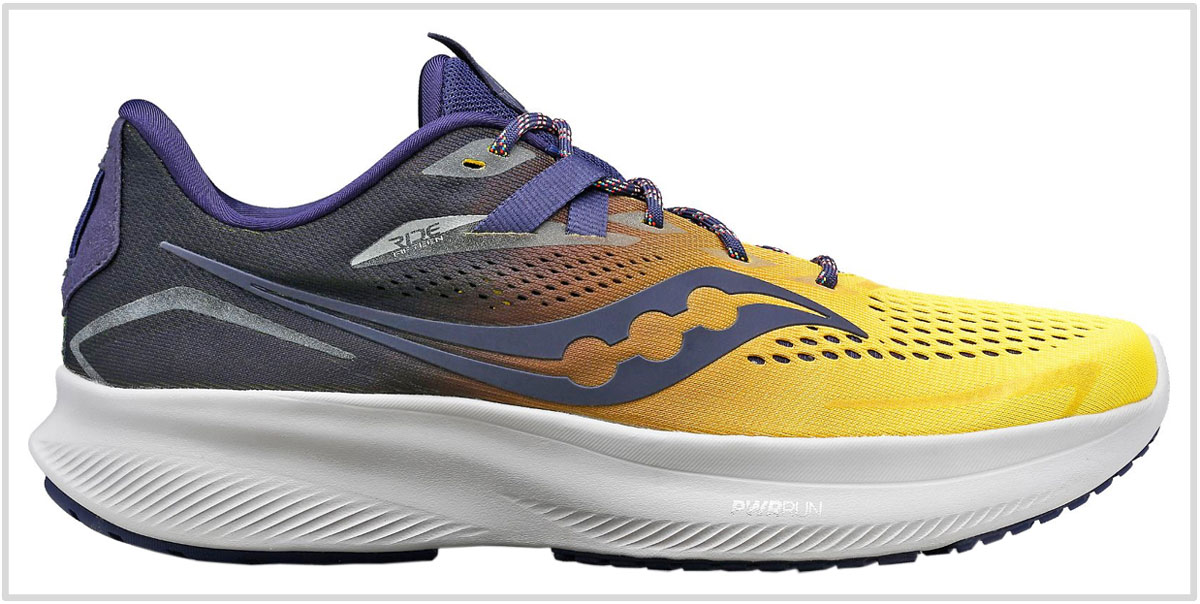 For 2022-23, Saucony’s popular everyday trainer has been completely redone with a brand-new upper and midsole. Though the Ride 15 isn’t as soft as the Asics Cumulus or Nike Pegasus, it makes up with its transition-friendly character.

The midsole isn’t lacking in ride comfort. The Ride 15 has rear and front stack heights of 35 mm and 27 mm, so there’s plenty of cushioning available for most types of runs. The Ride 15 is an excellent daily trainer with a breathable upper – our review of the shoe is here.

Except for its reflective upper, the Vizipro variant shares most of its parts with the standard Ride 15.

Out of the three, only the Pegasus 39 Shield is winter-specific. It has an insulated and water-repellant upper with reflective elements – a feature that makes the shoe visible in low-light running conditions. The outsole uses a grippy rubber compound for superior traction over slush and wet roads.

It’s worth mentioning that the Pegasus Shield has the same midsole as the Pegasus 39, so there’s plenty of ride comfort for daily runs – regardless of the distance. 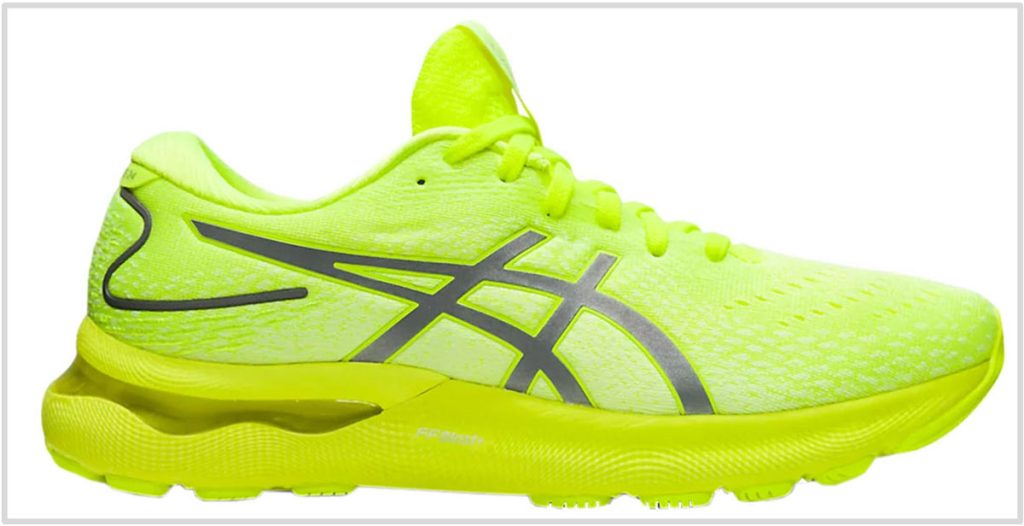 The reflectivity on the regular Nimbus 24 isn’t bad at all, so the Lite-Show version performs even better under low visibility conditions.

In addition to the reflective heel strip, the side logos of the Nimbus 24 Lite-show also happen to be reflective. The bright, fluorescent color scheme also helps make the shoe visible.

Most of the Lite-Show model’s high-viz action takes place around the midfoot; both the inner and outer logos are reflective. Since they span across 3/4th of the shoe’s side profile, they also deliver uni-directional reflectivity. We wish that the laces were reflective as well. 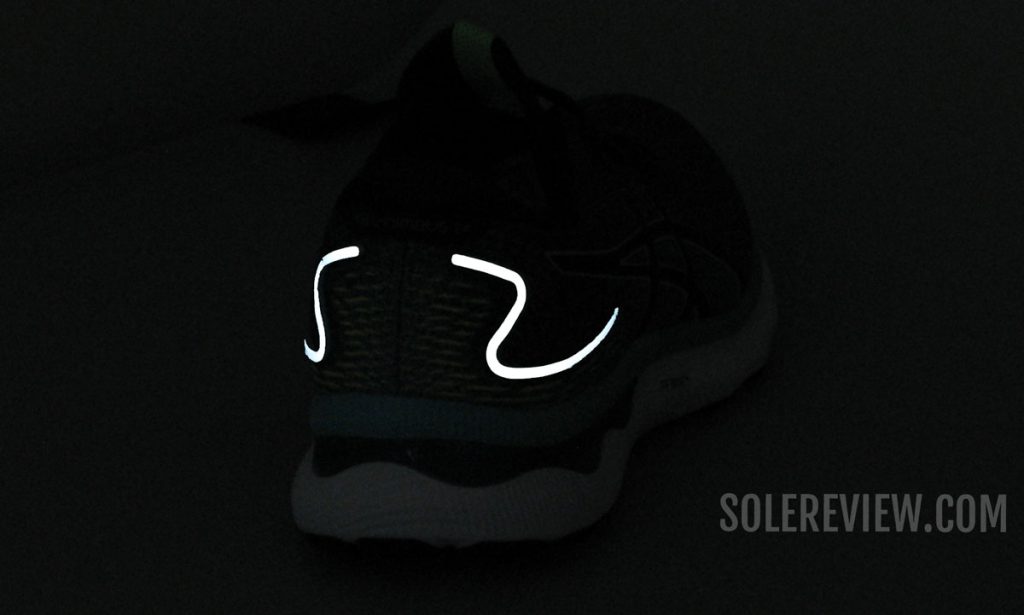 Even the standard Nimbus 24 has excellent low-light visibility.

The Lite-Show Nimbus shares an identical sole unit with the standard Nimbus, so it has the same plush ride that makes long-distance runs extremely comfortable. The Nimbus 24 has a brand-new Flytefoam blast midsole that creates an engaging ride experience.

For what it’s worth, the Nimbus 24 feels faster than the 23 because of the reformulated midsole. It’s still an excellent running shoe for long-distance cruising and everyday runs. Our detailed review of the Nimbus 24 is here.

A reflective running shoe with an old-fashioned medial post; there aren’t many of them around, are they? The Kayano 29 Lite-Show is a traditional stability shoe that also has high visibility bits. To be clear, Asics does not mention a medial post, but the inner midsole is firmer than the outer side.

Many recent Asics running shoes have made their cushioning softer, and the Kayano 29 is no different. While it’s not as plush as the Nimbus 24, the Flytefoam Blast Plus under the forefoot makes the ride soft and comfortable.

This is a supportive 10.5-ounce shoe, so it feels heavier during runs when compared to the lighter GT-2000 10.

The upper is what one would expect of a Kayano. The fit and feel is comfortable, thanks to the plush lining and quilted foam pockets. But it shines during runs in low lighting conditions; the reflective accents make it easy to be seen in the dark.

The GT-2000 10 is Asics’ popular stability trainer, and it also happens to be available in a reflective avatar.

This is a shoe with plenty of visibility, as most of the exterior has reflective trims. Even the laces are the high-visibility kind along with reflective cut-outs on the heel.

The ride is the same as the standard GT-2000 10; the midsole has a supportive forefoot with a softer heel. There’s a firmer medial post on the inner midsole for the traditional stability shoe experience. Asics doesn’t advertise the firmer wedge, but it does exist.

There are two reasons why the Vaporfly Next% 2 features on this list; that’ll be the reflective Swoosh logos on the lightweight upper. 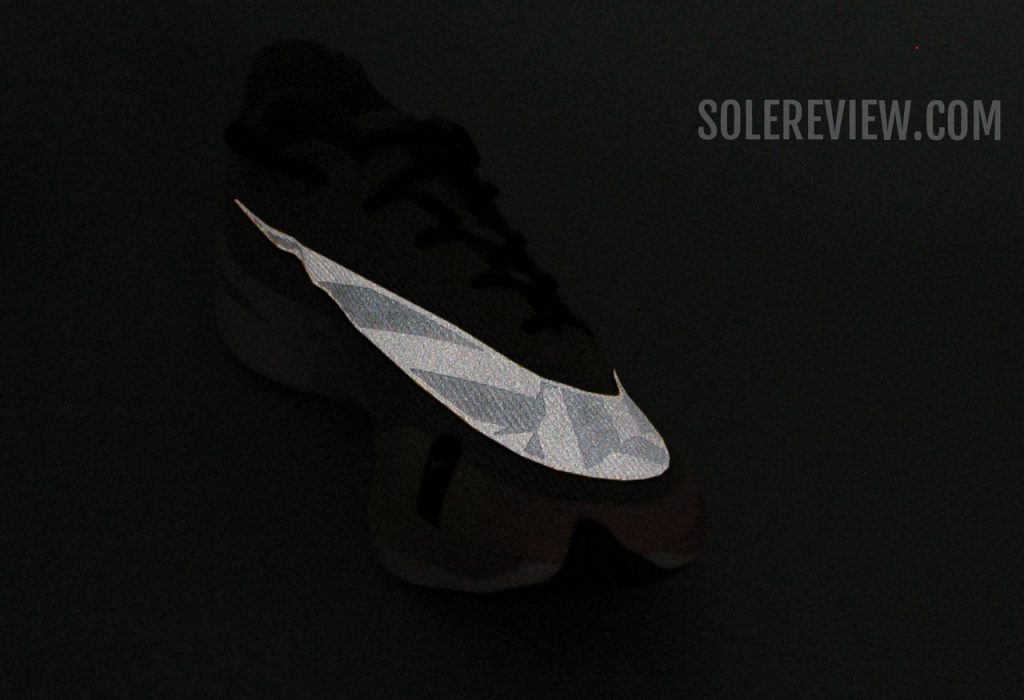 The oversized Swoosh logo on the upper reflects light in the dark, thus making the Vaporfly Next% visible during dawn and dusk.

As for the rest of the shoe, most of you know the spiel by now. The soft and bouncy ZoomX foam midsole contains a Carbon plate to deliver its signature responsiveness.

This 6.9-ounce marathon racer also delivers an exceptionally high cushioning-to-weight ratio. Our wear-tested review of the Vaporfly Next% 2 is here.

The Saucony Endorphin Speed 3 sells in three versions. There’s the standard model, the reflective Vizipro edition, and finally, the winterized Runshield variant for the colder months.

But if you’re looking for a reflective upper, it’s hard to go wrong with any version.

The Endorphin Speed 3 is also sold in a winterized ‘Runshield’ variant.

If you don’t want cold weather protection, then the regular Endorphin Speed or Vizipro provides excellent performance in low visibility conditions. Though the Vizipro Endorphin Speed 3 is the most reflective, the regular model isn’t bad either; the large trim over the heel is fully reflective.

The midsole is where the magic happens. The soft PEBA foam (Pwrrun PB) works together with the Nylon plate to produce a comfortable yet speed-friendly ride character.

Use the Endorphin Speed 3 for quick daily miles or a marathon – it serves both use cases equally well.

The New Balance 1080 V12 is one of those rare running shoes that have an abundance of high-visibility elements. We say ‘rare’ because most brands now sell a reflective version of their popular model for additional business.

Thankfully, New Balance hasn’t gone that way, not just yet. The standard 1080 V12 has not just one, but three different reflective placements. The largest trim is the molded logo on the midfoot, followed by smaller pieces over the heel and forefoot.

The side ‘N’ logos reflect light in low-visibility conditions.

The high level of reflectivity makes the 1080V12 excellent for low-light conditions. But that’s not the only reason why one should buy the 1080.

The deep cushioning reservoir of the high-volume midsole makes high-mileage runs easy on the feet. Our comprehensive review has everything that you want to know about this shoe.

The cushioned 1080 V12 is no slouch, either. The rocker-shape midsole and the resilient foam work together to make everyday runs peppy, so this shoe isn’t just for lazy runs. 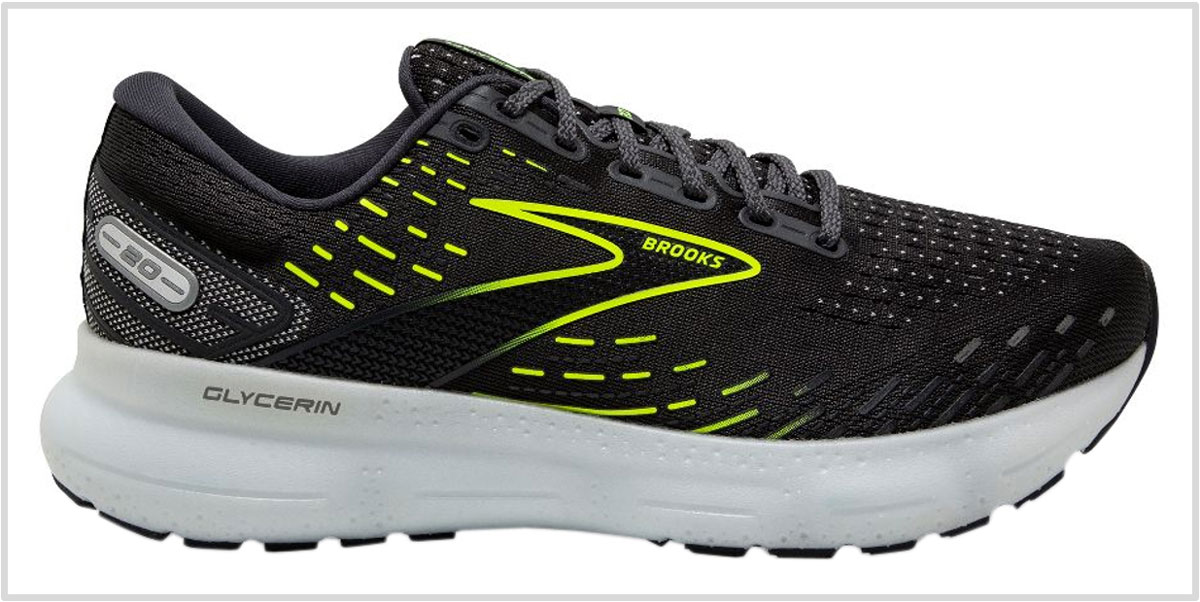 The ‘Run visible’ pack has been available for a few years now, a clear sign that Brooks will make reflective shoes a regular part of its catalog.

The Brooks Glycerin is to the Ghost what the Asics Nimbus is to the Cumulus – a running shoe with a higher level of midsole and upper plushness.

The one-piece midsole has just the right blend of ride comfort and stability. This makes the Glycerin 20 ideal for everyday runs and high-mileage training – as long as the speeds are slower than 4:30 min/km (7:00 min/mile).

The soft and smooth upper of the Glycerin 20 Run Visible has been repurposed for low-light conditions. Brooks uses a combination of fluorescent colors and reflective accents to make the Glycerin 20 visible in the dark.

It’s worth highlighting that the Run Visible model use the same upper mesh as their road models. In short, the ventilation levels are unaffected, unlike the Nike Shield or Asics AWL products. This is not a flaw, but an FYI for runners who run in warmer weather.

The adidas Terrex Speed Ultra is an excellent trail running shoe, reflective or not.

This speed trail runner weighs under 9 ounces without compromising performance. A Boost foam core delivers tried-and-tested cushioning and does not stiffen in the cold. A firmer EVA frame adds stability and quickness to the ride.

The Terrex Speed uses a full-length Continental rubber outsole with an aggressively lug geometry for dependable traction. Though the midsole lacks a rock plate, the rubber outsole acts as a protective shield and delivers proprioceptive feedback.

This is a speed-running product, so the upper balances a minimalist design with protection. The thin tongue is lightly padded and perforated for comfort and ventilation; the exteriors use strategically placed overlays for reinforcement.

However, the real reason why the shoe features here is its additional reflectivity. The 3-stripe logo detail is reflective, and so are the laces.