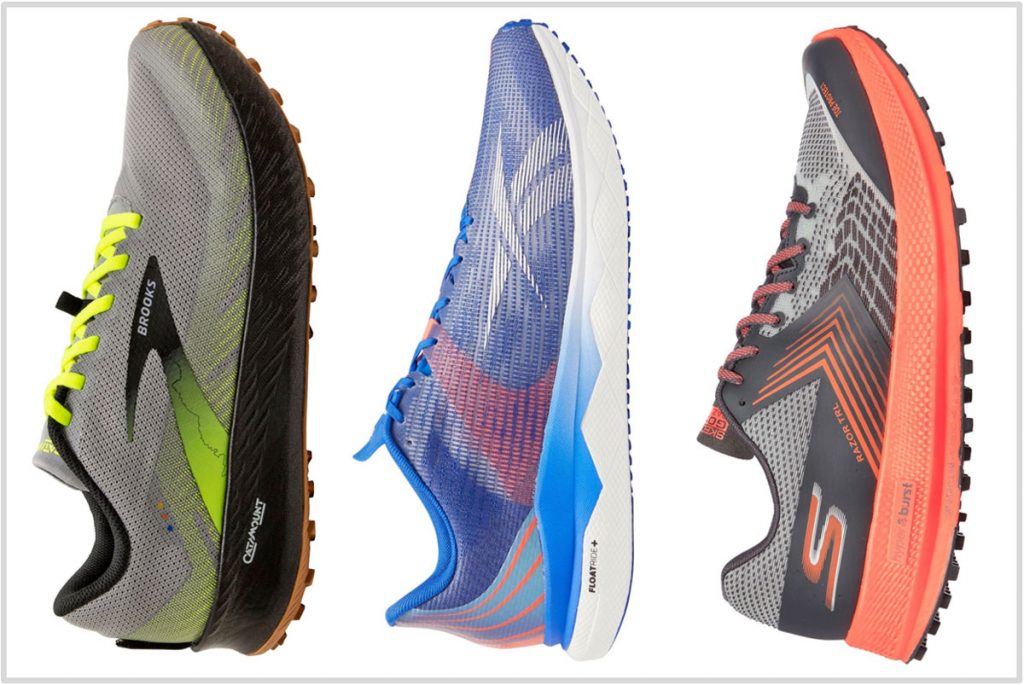 This article has been updated with current models for May 2021. The Hoka Rincon and Saucony Kinvara 11 have been replaced with their updated versions. The Brooks Catamount, Reebok Floatride Run Fast 3, Saucony Endorphin Speed, and Skechers GoRun TRL Hyper are new additions. The New Balance Summit Unknown, Nike Vaporfly Next %, Reebok Floatride Run Fast Pro, Saucony Switchback 2, Skechers GoMeb Speed 6 Hyper, and Skechers GoRun MaxRoad 4 have been removed. Except for the narrower ‘B’ width, the women’s models are identical to men’s.

The easiest way to write this guide would be to compile a list of lightweight running shoes with their weight sorted in ascending order.

But that would be a completely pointless exercise, because that list would be full of impractical road racers and little else. A more effective approach is to group the shoes by use-cases – in the same way how most of our other guides are structured.

If this piece was written a decade ago, most lightweight shoes would have featured injection-molded EVA midsoles with a token outsole placement.

Back then, running shoes had to conform to a strict weight budget – cuts made in one place had to be compensated elsewhere. Design and material cutbacks usually meant a compromise in performance or durability.

While midsole foam materials have improved by leaps and bounds, a lightweight build is also a result of the upper and outsole. Single-piece knit or engineered mesh uppers help reduce weight, as do thinner outsoles.

Thick outsoles made of superior rubber or clever geometry are still the most durable kind. At the same time, brands use a combination of improved compounds and clever engineering to reduce weight without compromising durability.

For example, the Saucony Endorphin Speed uses thin, perforated lugs that flex together with the Pebax midsole. The New Balance Beacon 3 plugs small rubber lugs over what is otherwise an all-foam outsole.

In nearly all situations, a lighter running shoe is always better. Runners love the NB Beacon or Brooks Hyperion Tempo not just because they’re cushioned and versatile, but also how light and non-distracting they are.

Trail running shoes are an exception – removing things like the rock plate, a rugged outsole, and protective upper overlays affect the functionality. There are signs of progress though. Both the Brooks Catamount and Skechers GoRun Razor TRL use a lightweight EVA blend to make massive weight-related improvements.

Also, certain stability shoes cannot function without additional support features. Models like the Brooks Beast 20 or the Saucony Omni 19 have wide midsoles with raised rims and plastic stabilizers. Here, a lighter build will water down the functional proposition.

The bar for the ‘lightest’ tag isn’t the same for every category. It would be unfair to expect a cushioned and mileage-friendly shoe to weigh the same as a racing flat.

This guide is divided into three categories. The first group contains cushioned running shoes suitable for daily runs to a marathon. All these shoes have a high-volume midsole for long-distance comfort.

The second category has road racers and speed-friendly trainers in them, and the last group has lightweight trail footwear.

We’ve temporarily excluded the Nike Vaporfly Next % because the V1 has been discontinued, and the supplies of V2 are yet to arrive. We’ve also substituted the Reebok Run Fast Pro with the Run Fast 3 since the Pro variant’s availability appears to be limited.

A few years ago, the Fresh Foam Beacon burst into the running shoe scene and instantly became a crowd favorite. Its lightweight cushioning made it very versatile. Depending on how one saw it, the Beacon could be used as a daily trainer at moderate paces or the occasional slow day cruiser.

Making the said character possible was a thick stack of foam that provided the cushioning comfort without the excess baggage. The single-density midsole was also smooth and supportive, traits that made the Beacon an appealing proposition. Its 6 mm heel-to-toe offset was the sweet spot for most runners.

Now in its third iteration, the Beacon V3 retains the familiar ride quality that made it successful. Also present are the obligatory rubber lugs under the forefoot and heel.

The upper has a snug and short fit like the previous Beacons. The exterior receives a few cosmetic details – including the flared heel design that runners have come to either love or hate.

Brooks ups its lightweight shoe game with the Hyperion Tempo. For years, the Brooks catalog consisted only of comfortable yet clunky products.

The Hyperion Tempo reverses that trend and offers a generously cushioned ride that is also lightweight. And by ‘light’, we don’t mean 10-ounces. The Hyperion weighs just a smidge over 7-ounces. For a brand that sells mega trainers like the Beast and Addiction, that’s quite the turnaround.

If it weren’t for the outsole rubber, the Hyperion could have been lighter. But the extra rubber does make the shoe durable and grippy, so it’s no loss.

The 8-mm drop midsole plays a huge role in bringing the weight down. The ‘DNA Flash’ foam is akin to Skechers’ HyperBurst, so the ride quality is similar. The firm cushioning is friendly for long-distance and tempo runs alike.

The comfortable upper sticks to the basics. Interior plushness is all but absent, with any foam padding and superfluous overlays kept to a bare minimum.

Is the idea of the Hyperion Tempo original? No. But is it a lightweight and speed-friendly distance trainer? Yes. We think highly of this shoe; our detailed review has all the goods.

There are a couple of reasons why the Rincon 2 weighs less than 8-ounces. This shoe sticks to the original Hoka template by minimizing the use of outsole rubber and leaving most of the cushioning to the lightweight EVA foam midsole.

There’s not a lot of layering on the upper either. A single-piece, mono-layer mesh forms the outer shell to create a secure and smooth fit. The tongue and heel are lightly quilted to make things comfortable in the back.

The Rincon 2 is a great example of a mileage-friendly shoe that is also lightweight. It doesn’t cost as much as other maximal Hoka models, so that’s a bonus. 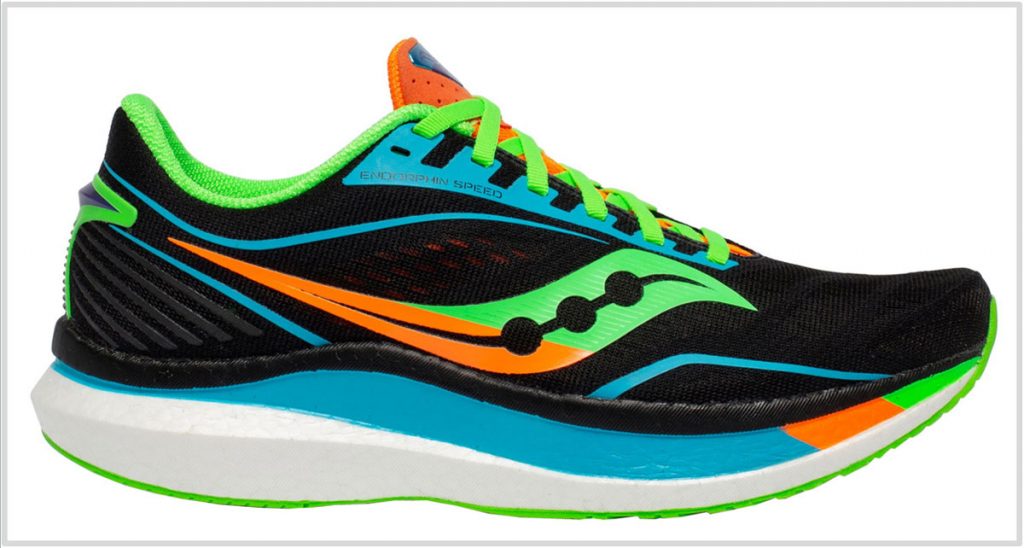 What we like about Saucony is its ability to make value-added adaptations to an existing cushioning platform. For example, Saucony’s Everun and Pwrrun+ foams were ‘inspired’ by adidas Boost but delivered a ride quality with a distinct cushioning character.

The new Pwrrun PB foam follows a similar path of adaptation. This is Saucony’s new PEBA-based foam that feels markedly different than the likes of Nike ZoomX or Reebok Floatride.

The Pwrrun PB midsole is formed by compression molding a dense cluster of foam globules, and this construction results in a resilient structure. Inside this cushioned midsole is a Nylon plate that makes the transitions snappy.

In short, the E-Speed is an excellent running shoe that delivers an optimal blend of distance-friendly cushioning and tempo character. All this is packed into a lightweight, sub 8-ounce package.

The Reebok Run Fast 3 is an under-rated speed trainer that’s akin to a lighter version of the adidas Boston.

If you’re not familiar with either, then know that the Run Fast 3 is a cushioned and lightweight running shoe that bridges the gap between everyday trainers and racing flats. In Reebok’s case, the RF3 resides between the Floatride Energy 3 and the hyper-lightweight Run Fast Pro.

Owing to its PEBA foam midsole, the Run Fast 3 shares more in common with the Fast Pro. Here, a full-length Floatride+ (PEBA) foam is layered together with a firmer EVA rim on top for stability.

The PEBA foam weighs next to nothing, so that creates an weight allowance to accommodate a proper rubber outsole with aggressive lugs. Above the cushioned midsole is a breezy upper that disappears over the foot.

So if you’re in the market for a lightweight semi-racer with a cushioned and supportive ride, it’s hard to go wrong with the Reebok Run Fast 3.

If hard-on-your-feet racing flats aren’t your preferred choice of footwear, consider the Skechers GoRun Razor+. The latter isn’t a racing flat – it’s more like a speed-friendly shoe with lots of cushioning.

The Hyper Burst foam midsole provides an optimal mix of cushioning and responsiveness – all within a 6.4-ounce (181 grams) silhouette. If you’re planning to run longer while maintaining threshold speeds, then the Razor 3 is the right shoe for the job. The upper fits narrow and somewhat shallow. 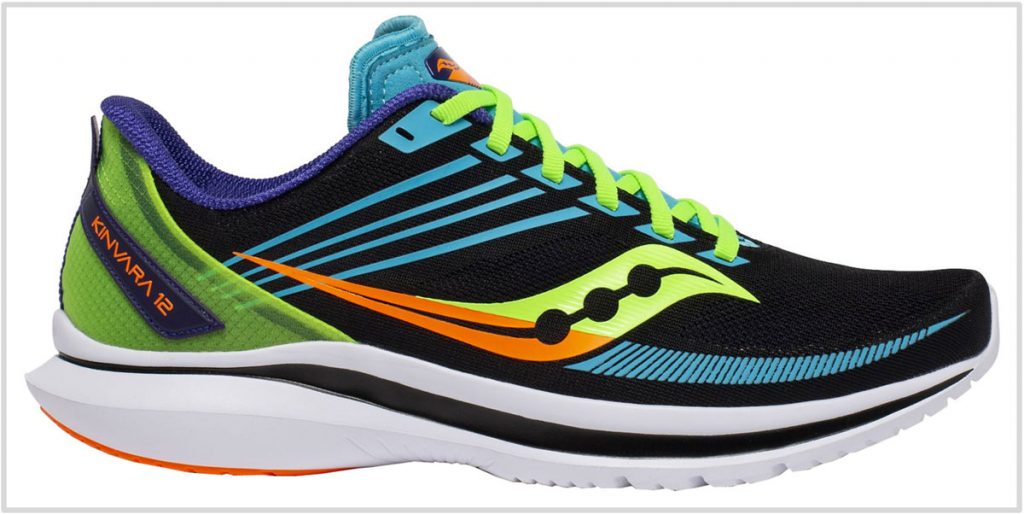 Saucony’s popular trainer with a 4 mm offset returns for the 12th time. It’s also redesigned from the ground up, and shares no parts with the Kinvara 10 and 11. The Kinvara 12 also manages to lose some weight in the process; the new model weighs a comfortable 7.5-ounces.

The midsole gets improved stability because of the wide flare. Nonetheless, the 12 retains the low-offset, medium-soft ride with the Kinvara versatility that everyone loves. The lightweight upper is very soft and breezy without compromising the interior comfort.

There’s enough cushioning to make runs of most distances comfortable. At the same time, it’s not slow; the new foam is resilient and has ample ground feedback for tempo runs.

At just under 9-ounces, the Fresh Foam Tempo isn’t the lightest of the bunch. After all, the Tempo shares screen space with 5.2 Oz marvels like the Skechers Speed 6.

And yet, the Tempo manages to hold its own among other lightweights. This is a shoe that’s modeled on the Zante, so it packs a lot of the Z-shoe goodness. The Fresh Foam EVA midsole has a comfortable ride that doesn’t feel lacking under high-speed tempo runs.

The snug-fitting upper is smooth, comfortable, and complements the do-it-all midsole.

Cushioning tech from road running footwear is gradually making its way into trail shoes, and that also includes the lightweight aspect.

The Brooks Catamount uses the same midsole tech as the Brooks Hyperion, so the hyper-lightweight DNA Flash (Nitrogen-infused EVA foam) allows the Catamount to be cushioned yet versatile.

The shoe weighs just over 9-ounces, and that’s very respectable for a product that has a trail-worthy outsole and rock plate. The aggressive lugs made from the sticky rubber (TrailTack) compound deliver sufficient bite, whereas the plate protects the foot from the pointy rocks and roots.

We’ve heaped praise on the Hyperion Tempo’s cushioning, and the same material equips the Catamount with supportive cushioning for the trails. The firm ride of the 6mm offset midsole has inherent stability for off-road runs with sufficient comfort for high-mileage trail runs.

The upper keeps the weight low by applying protective urethane films over a mesh exterior. The partial sleeve helps keep the debris out and secures the midfoot.

Both the Brooks Catamount and Skechers GoRun Razor TRL share a similar ride. In the sense that both the midsoles are based on a lightweight EVA foam blend that is either Nitrogen or CO2 infused.

Without getting caught in the technicalities, these midsoles deliver a cushioned ride in an extremely lightweight package. For example, the Skechers Razor TRL weighs a mere 8-ounces. That’s noticeably lighter than the Catamount, and with good reason.

The Skechers TRL lacks a rock plate and also has an outsole that’s split into multiple pieces. This results in a cushioning upside that makes the ride softer. Also, the 4mm offset of the Hyperburst midsole produces smooth and supportive transitions on the trail.

Thus, trail runners who prefer better ground feel may opt for the Razor instead of Catamount. The downside, of course, is the lack of protection afforded by the Brooks Catamount’s full-length outsole with a rock plate.

Best made in USA running and walking shoes