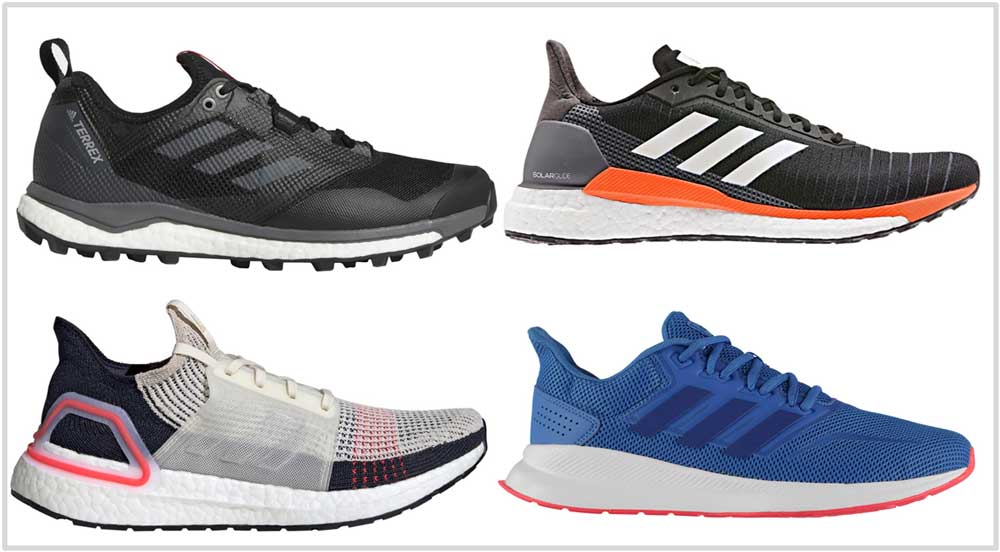 Maybe it’s just us, but the adidas running shoe line is beginning to feel a bit stale.

Because if you look around, brands like New Balance, Nike, and Reebok have upped their game with rapid-fire releases. In the last two years, Nike has come up with four cushioning systems. New Balance is quickly reinventing itself as a running shoe brand with improved Fresh Foam and new FuelCell intros.

Even Reebok – an adidas subsidiary – is quickly making inroads into the performance running shoe market. We even voted the Forever Floatride Energy as the best running shoe of the year.

And guess what, even Asics is attempting to venture outside its Gel and Trusstic shank playbook. Among others, Skechers is running amok with sub-6-ounce running shoes made of the HyperBurst foam.

adidas, on the other hand, seems to have hit a roadblock after Boost. Expanded Polyurethane used to be hot once, but there are lighter alternatives today which offer similar performance benefits without the added bulk.

There’s nothing wrong with Boost; it is still a super comfortable cushioning platform for the masses. It is also very durable and weather-resistant.

The problem is adidas’s stagnant design approach. The Boost midsole design hasn’t been updated at a fundamental level over the past five years. So to an outsider, the differentiation between a SolarBoost or a SolarGlide is a blurred line.

Other brands like Saucony have taken the same e-TPU platform and iterated their way through several versions. The Everun PU foam has evolved both from a visual and functional viewpoint. Incidentally, the upcoming Triumph 17 ditches the Everun moniker and adopts a Boost-like midsole design, albeit with minor differences.

The point being, we don’t see that kind of effort from adidas. They just seem, complacent.

That said, some staples are better left untouched – at a conceptual level, we mean. For instance, the redesigned adizero adios 4 and Boston 8 carries forward similar ride and fit dynamics.

Here’s a good way to filter the casual products out of the adidas running line.

1) adidas shoes that contain the word ‘Bounce’ are usually streetwear: adidas sells a few entry-level models based on the Bounce EVA midsole.

While the Bounce material itself isn’t an issue, the overall shoe design isn’t best suited for performance. All Bounce shoes are targeted at casual-wear consumers who just want a pair of comfortable shoes to walk around in. Sure, you can run in these shoes, but they are best used for shorter distances.

2) Models that go by the name PureBoost or SenseBoost: Recent PureBoost models are a vast improvement over the terrible 2014 PureBoost, but keep in mind that this assortment targets the lifestyle consumer.

3) Adidas running shoes with rigid plastic cages are also best avoided: It’s ironic how adidas markets a shoe made with recycled (plastic) Ocean waste but uses so much plastic on their products in the first place.

Discard the PureBoost, SenseBoost, Bounce, and shoes with rigid plastic shells, and what remains is this buyer’s guide. We’ve tagged the shoe names with the categories they represent: 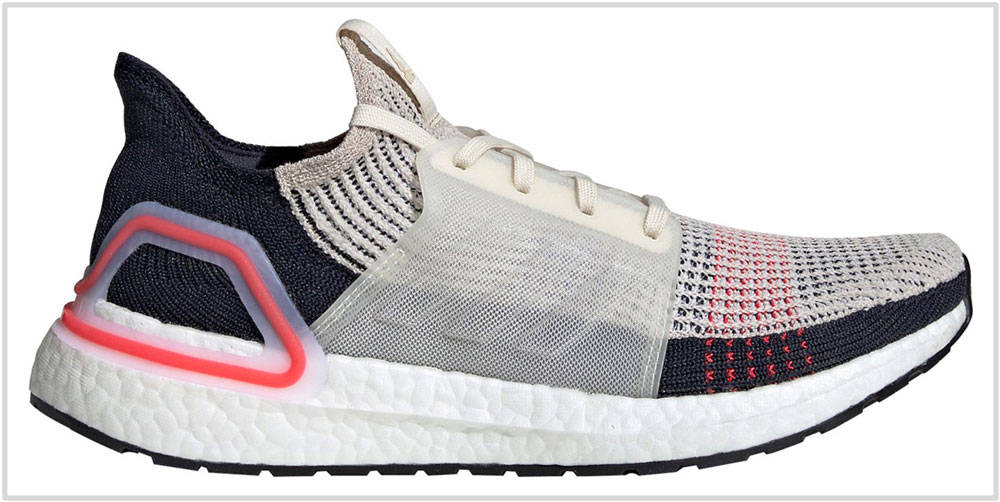 As the suffix suggests, the UltraBoost 19 is this year’s update to the original Ultra Boost. And all the updates are visible improvements over the old design. For example, the new upper has better-flexing midfoot panels for comfort. On the back is a skeletal clip that clasps both the heel and the midsole top for support.

You’ll get unmatched durability, softness, and traction from the large Boost midsole and the one-piece outsole made out of Continental rubber. The UltraBoost 19 is good for easy long-distance runs and such.

We didn’t include the SolarBoost in the previous edition of the same guide. So why add it now?

That’s because the SolarBoost 19 loses the super-narrow upper fit behind, and the updated model has a more comfortable interior. The sole unit of the original SolarBoost was pretty sorted out, so it’s a good thing that the ride character hasn’t changed.

The full-length Boost cushioning is a better fit for easy runs than anything else; the softness means that the SolarBoost isn’t a swift transition machine.

Though not as soft as the UltraBoost, the Solar Glide’s midsole is joined directly to the upper without an EVA rim separation. This makes the Solar Glide a lot softer than the previous generation Supernova.

The Solar Glide 19 is a 10 mm drop shoe with most of the Boost loaded under the heel, so this is very much a rear-foot striker’s shoe. While it does not feel as efficient as the older Supernova, the Solar Glide is a comfortable daily trainer. It’s perhaps not the best tool of choice for a tempo run though – may we suggest the Boston 8 instead?

The Glide has been redesigned for 2019. Not much has changed; only the upper gets a little less plasticky without the midfoot overlays. The sole is identical to the 2017-18 model so there’s no difference in the ride quality.

Though the ‘ST’ in the shoe’s name denotes ‘stability’, the Solar Glide ST 19 isn’t designed like a conventional stability shoe.

The midsole doesn’t have a firmer wedge on the inside but uses a filmic overlay and raised sidewalls to make the inner midsole more support. These extra bits are what separates the ST version from the regular Solar Glide 19.

Even so, the ride character is very neutral with plenty of cushioning for various run kinds. The Continental rubber outsole is long-lasting as well as grippy over most surfaces.

While the Glide ST does not offer widths, a spacious interior is standard with the stock width.

The EVA covered Boost midsole is one of the best things about the Solar Drive 19. This separate sheet of EVA over the Boost foam makes the ride more efficient than the softer Solar Glide – but without the cushioning trade-off. It’s got a bit of the Supernova Glide in it, if you know what we mean.

If you were wondering where the Response Boost disappeared, you’re looking at it. The Solar Drive is old wine in a new bottle – it is based on the same midsole and non-Continental outsole seen on the Response. The upper is newly designed to match the Solar visual story.

Nonetheless, it is a good choice for a) runners looking for a firmer ride than the Solar Glide, b) those who want a Response Boost replacement.

2019 is the second year for the Solar Drive; the refreshed model features a cleaner looking upper over the same midsole/outsole as the 2018 model.

Adidas sells a few competent affordable running shoes. You would be familiar with the Duramo, of course. The second shoe is the adidas RunFalcon, a relatively recent induction to adidas’s footwear assortment.

The design has excellent value for its $60 retail price. The single-piece mesh upper breathes well and has a smooth interior fit along with a supportive midfoot.

The midsole is 100% EVA foam so there’s none of the Boost-type cushioning. And yet, the ride is comfortable enough for mild athletic activities. The bottom is completely covered with rubber for decent grip and longevity.

The Nova Run doesn’t have a Boost midsole or a Continental outsole yet still offers a lot of value for its $90 retail price.

The dual-density midsole is designed with a supportive forefoot and heel base along with a Cloudfoam heel plug for a cushioned ride. The outsole is made of adidas’s adiwear rubber, a compound that offers adequate traction and durability.

You’ll find the mesh upper to be breathable and secure-fitting, and there’s plenty of reflectivity too.

The adizero Boston 8 is perhaps adidas’s best performance running shoe at the moment. Though the Boston is perceived as a shoe for fast training runs (which it is), it is equally suitable for a wide range of runs. You can use it as a responsive daily trainer and also as a race-day shoe for up to half marathons.

Its ride is cushioned but firm enough for fast runs. The outsole made of the durable Continental rubber that grips well and lasts long.

The adios has always been a race day favorite because of its cushioned ride and a breathable upper. This isn’t technically a racing flat, but its low-profile midsole makes it suitable for fast runs. Before you ask – the adidas Takumi sen isn’t widely available outside Japan, so you’ll have to make do with the adios.

It’s more durable than a flat too due to the Continental outsole. The adios 4 could be cheaper though – the original $140 price was due to the high-tech suede upper and the stenciled-outsole of the 2014 model. Adidas cheapened out on the materials but has not passed down the benefit to the customer. If the Boston has everything (material-wise) that the adios has, then there’s no reason why the adios should cost $10 more.

The snug upper still feels scratchy, (as did the versions 2 and V3) so always wear socks with the adios.

The Terrex Aggravic XT – which is also available in a waterproof Gore-Tex version – is the best all-purpose adidas Trail running shoe. Don’t let the full-length Boost and the absence of a rock plate scare you away. The Continental rubber outsole provides complete under-body protection and makes the ride firm but cushioned.

adidas has put its Continental rubber compound to very good use here. The Aggravic XT’s outsole is the footwear equivalent of a motorcycle knobby tire – the rubber has plenty of useful grip for varied terrain. The protruding knobs create a wide tread that keeps the mud and debris from sticking.

The upper is thoughtfully put together. The entry is a Jaw-Paw type bootie with a padded Achilles dip. The forefoot and toe-box are solidly built – a thick urethane bumper protects the foot and a fused laminate adds side reinforcement.

Thanks to the flat speed loops, the lacing is tactile and very responsive to cinch pressure. Unlike many other adidas trail shoes, the Aggravic uses proper laces and not cords.

And surprise – this adidas upper fits half a size longer instead of the other way around. So getting a half size smaller should give you the conforming fit of a trail shoe.