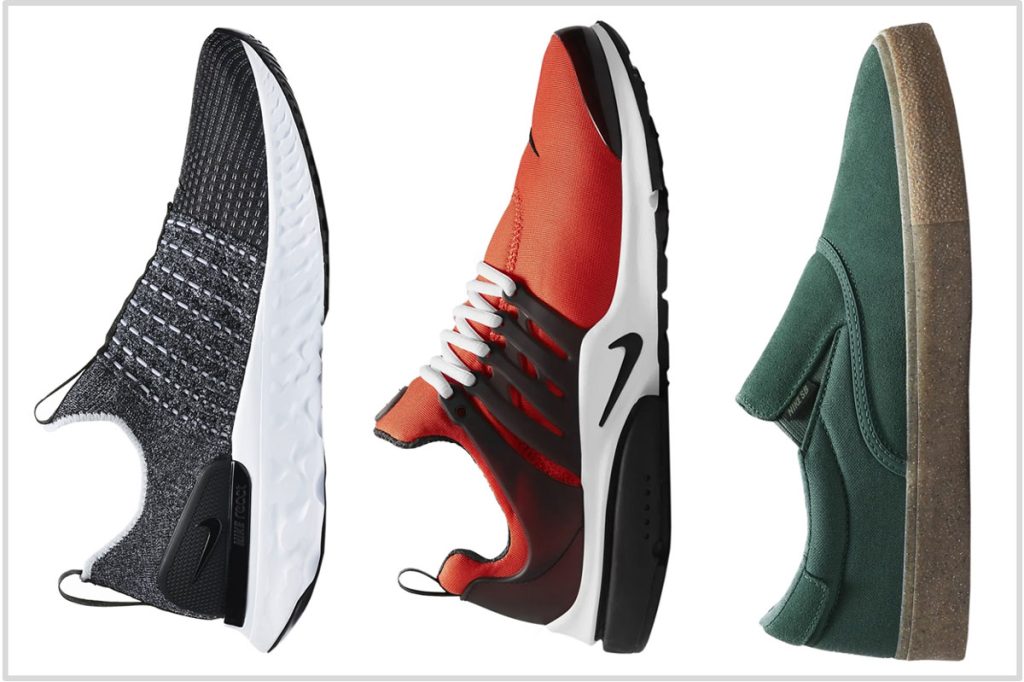 This article has been updated with current models for November 2022. The Free Metcon 4 is a new addition. The Nike Free Run Trail has been removed.

Even though many slip-on shoes have laces, the bootie construction usually allows the lacing to be set in a fixed position. In other words, the laces do not need to be tied every day. Having said that, a fixed lacing position works better on some shoes than others.

For example, shoes like the Nike Air Presto and Space Hippie 01 have an elastic heel collar. So all you have to do is to leave the laces in a semi-secure position, and then use the shoe as a slip-on.

Most Nike shoes with a slip-on entry are not performance running shoes, so not having a high level of fit security isn’t a deal-breaker.

Most slip-on shoes are walking or casual footwear at best, with skate shoes being the only exception. Besides walking and casual wear, skate shoes can be used as originally intended.

Then there are true Nike slip-ons like the Nike React Phantom Run Flyknit 2. Instead of laces, the React Phantom uses a stretch upper and elastic midfoot cords to secure the foot.

There are a couple of traditional slip-on silhouettes in the Nike catalog, and both of them are skate shoes.

The Nike SB Zoom Verona and SB Chron 2 are classically-styled skateboarding shoes that seem inspired by a similar style from Vans – the maker of the original skateboarding slip-on.

Lastly, Nike sells many laced shoes without an elastic upper; the Nike Free Run 2 and Air Huarache are good examples.

If we had to pick just one Nike slip-on shoe, it would be the React Phantom Run. It’s based on a similar React midsole as the React Infinity Run 2, so the cushioning comfort is almost identical.

However, the slip-on model differs in a couple of ways. The midsole doesn’t have the stiff rims from the Infinity, and instead uses a smaller heel clip for support.

The second difference is the lace-free Flyknit upper. The foot is secured by the elastic knit upper and the bands running over the midfoot. The overall design deftly straddles the fine line between performance and athleisure.

(Note: The Nike React Infinity Run 3 has been out for a while now, but we haven’t seen a slip-on version yet.)

Even if you don’t skate, it’s hard to go wrong with this basic $60 slip-on.

The design is old-school as it gets; the Chron 2 uses a vulcanized (aka Autoclave) construction to fuse the upper with the rubber sidewall and outsole. The rubber outsole is flat, but has a textured geometry for durable traction.

An elastic gore allows a smooth entry into the shoe and helps with the upper fit. The foam-backed collar provides both grip and fit comfort.

The SB Chron may be a traditionally designed shoe, but contemporary bits like the performance foam insole infuse it with modern-day comfort. For example, the footbed is made of Nike’s Solarsoft EVA foam.

We remember the Air Presto’s inaugural year with nostalgic fondness. It was advertised as ‘T-shirts for your feet’, and sold in XS, S, M, L, and XL sizes.

Even though Nike no longer sells the Presto by alphabetical sizing, the modern reissue is a replica of the original model – down to the stretchy mesh upper, plastic midfoot cage, and soft midsole.

When the Air Presto was first released, nothing came close in fit and ride comfort. More than two decades later, it still holds up. The soft bootie upper has an elasticated entry and pliable heel to create a comfortable slip-on experience.

There are a couple of reasons why the Zoom Verona slip-on has a $15 upcharge over the similar-looking SB Chron 2.

Even though both skate shoes share a near-identical design, the Verona Slip has a Zoom Air bag under the heel. Also, most of the Verona’s upper is made of suede leather, thus making it more comfortable and durable than an all-canvas construction.

Like the SB Chron, the Verona is a true slip-on. The elastic gore on the sides of the tongue allows easy entry and works together with the padded heel collar to deliver a secure grip.

After an extended hiatus, the Nike Free is back in the performance running game. This snug fit of the Free Run 5.0 secures the foot over the soft and flexible midsole.

This time, the narrow forefoot and cord-assisted lacing give the Nike Free a performance-oriented fit that reminds us of the 2013-14 Free models. The snug upper and cushioned ride make this shoe versatile enough for everyday runs (of up to 10K) and athleisure wear.

Included with the soft collapsible heel is a padded, sock-like collar that makes slipping into the shoe a breeze. 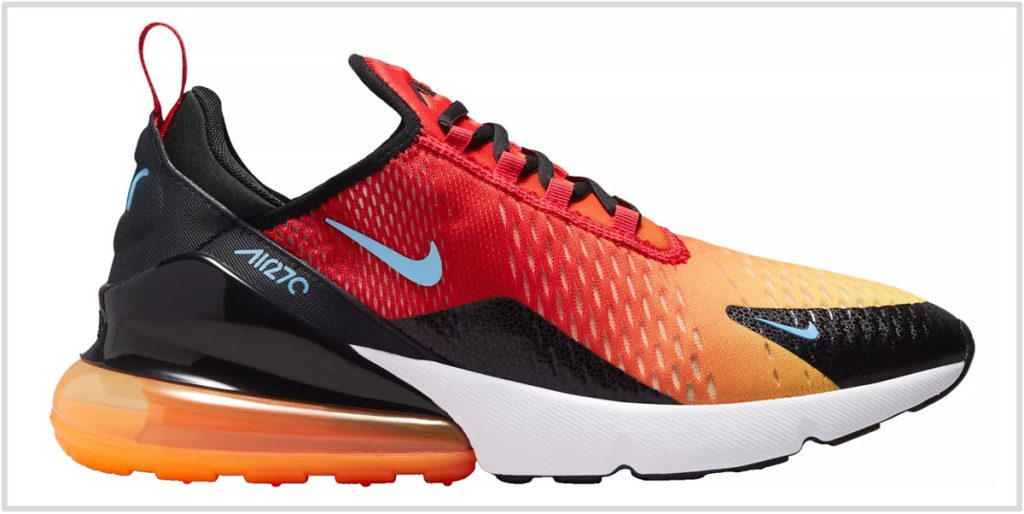 The Nike Air Max 270 and VaporMax took over once the reign of the Air Max 2017 ended. Based on anecdotal evidence, even the Vapormax doesn’t seem to be as popular as it once was. The only modern Air Max model we see everywhere is the 270.

The large Max Air bag and molded heel clip are mated to an EVA foam midsole to make the 270 a comfortable lifestyle sneaker. Say what you will; having a large visible Max Air bag under your heel is childish fun.

An asymmetrically-laced upper provides the required levels of lock-down, and the rear includes a slip-on collar and a soft, padded heel. 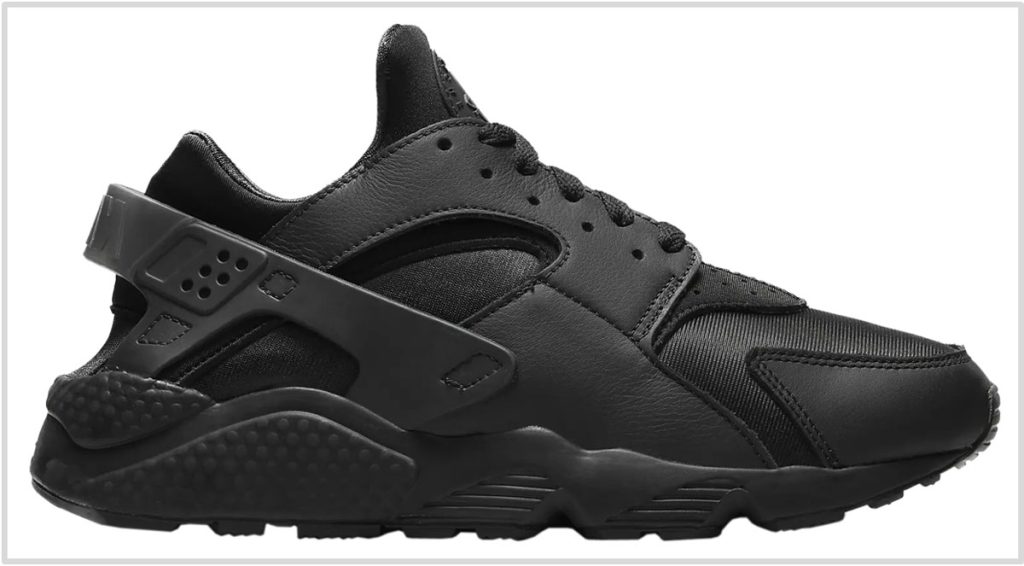 Believe it or not, the Nike Air Huarache was originally a performance running shoe.

When the Huarache was first released in 1991, things were very different. Running shoes had just made the jump from board-lasting to a slip-lasted design (like the Huarache).

What made the Air Huarache special at the time was the lack of a stiff heel counter – something that was a part of every running shoe that existed at the time.

Instead of a heel stiffener, Nike used a rubber strap over a soft slip-on bootie. The contemporary version is a truthful reproduction of the original Huarache, so the upper has a slip-on collar for accessibility.

Other things that worked in 1991 are also functionally relevant in modern times. For example, the EVA foam midsole and Nike Air unit turn the Huarache into a comfortable lifestyle sneaker.

If you have slim or narrow feet, then this vintage Nike Free Run 2 is for you. When it was first released, its small point of entry was a contentious issue.

However, once the feet are inside, the slip-on upper does an excellent job of keeping the foot locked in over the flexible midsole. The latticed suede overlays and toe-bumper also make the interiors narrow. 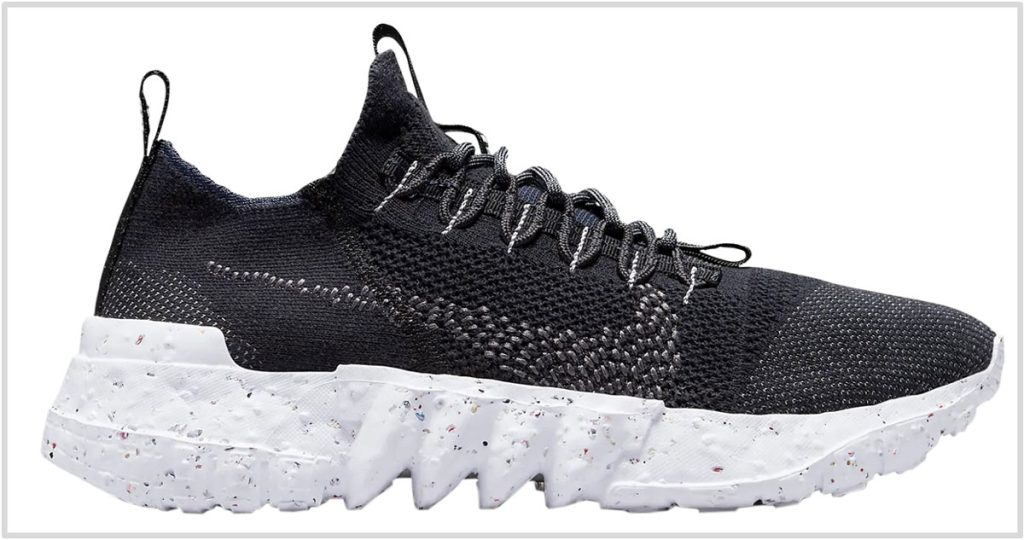 The Space Hippie 01 is avant-garde, even by Nike standards. By that, we’re not referring to the brand’s claim that the shoe is made of at least 50% recycled content.

It’s the misshaped design that sets the Space Hippie apart from the rest of the shoe industry. Okay, maybe the Asics Kayano 5-inspired Balenciaga runner is similar at a conceptual level, but the Space Hippie is light years apart.

It’s almost as if the Space Hippie was built as a claymation model; the speckled and lumpy midsole looks like it’s kneaded out of clay. On a completely unrelated note, the Oscar-winning Laika studio (of Coraline and Kubo And The Two Strings fame) is funded, albeit indirectly, with Nike money.

The Flyknit upper has a stretch slip-on bootie with a secure yet comfortable fit. The firm dual-density midsole provides an adequate level of underfoot comfort.

There is a reason why the Free Metcon 4 is the last shoe on this guide. This is a trainer that’s meant for gym training, so it’s not a comfortable casual sneaker.

We’ve seen people wearing the Free Metcon on the streets, but we suspect that was because they got a great deal and not how comfortable the shoe was.

We also mentioned the Metcon 4 in our Nike gym shoe guide, and that’s because the midsole combines a supportive heel with a flexible forefoot. The stable heel is reliable enough for weight-training sessions, whereas the flexible forefoot works for Plyometric training.

While lacing the upper gives you the desired fit security, the Free Metcon 4 has a slip-on construction. That way, you can ‘set’ the lacing once and then use the Metcon as a slip-on trainer.