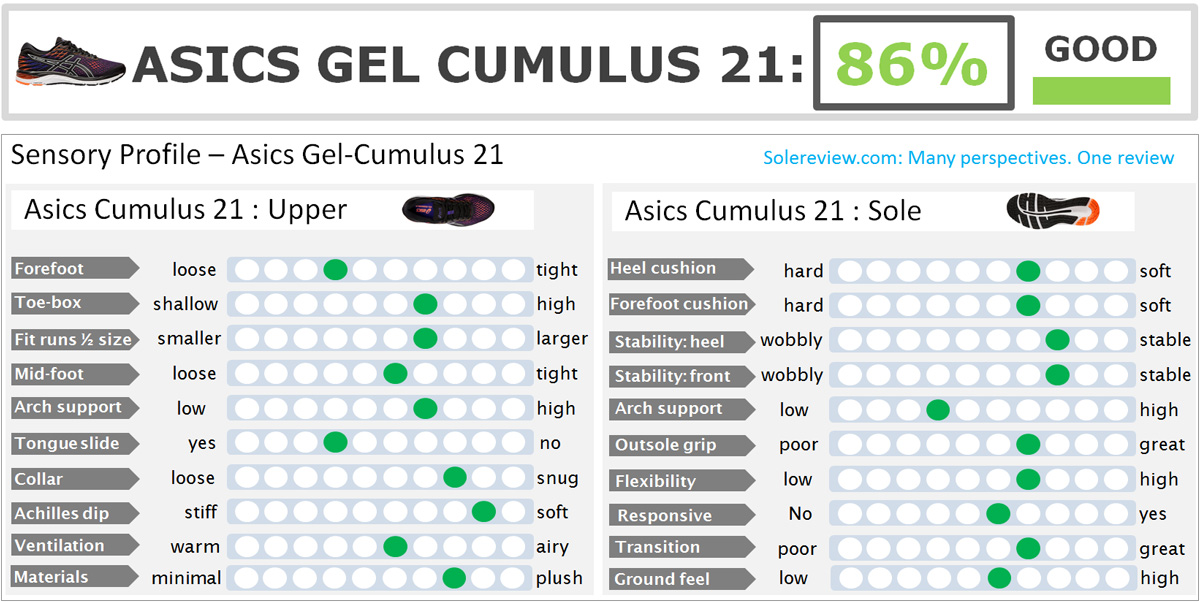 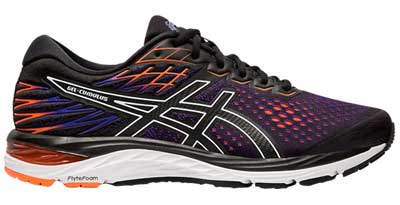 Buy from Zappos.com
.Check price on Amazon
Despite the absence of cutting-edge tech, this neutral trainer gets most things right. The Cumulus 21 has a spacious yet secure fit; the Flytefoam midsole has just the right amount of softness to make it versatile.
Smooth cushioning, soft and roomy upper,
Flytefoam isn’t engaging to run in, mild tongue slide 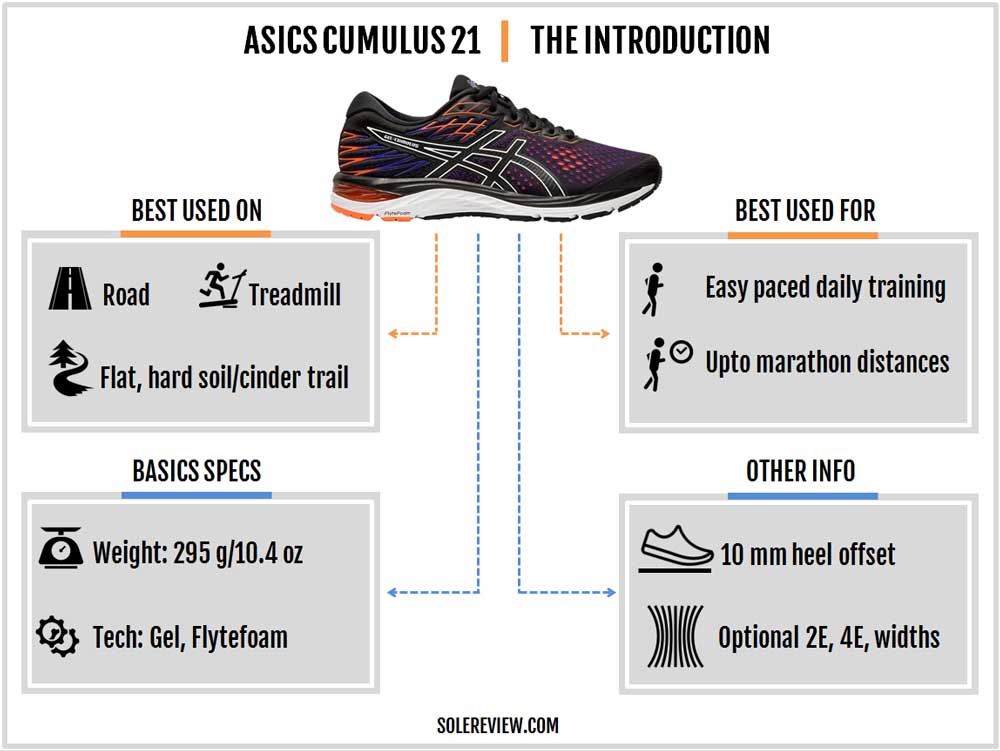 We’ll say it – the Asics Cumulus 21 is the best version yet.

To be clear, we’re not comparing the Cumulus with its non-Asics peers, but only benchmarking it against the prior models.

The last year’s Cumulus 20 was an improvement over the 19 and introduced several changes – such as the removal of the Trusstic midfoot shank and an overhaul of the outsole geometry.

The 20’s upper redesign also made the insides roomier than the 19. All in all, the Cumulus 20 turned out alright. Nothing spectacular, but it was a decent neutral trainer.

The Cumulus 21 is not very different from the 20, yet the softer upper and tuned ride can be counted as improvements. Styling is subjective, but we also think that the 2019 model is much better looking than the unassuming Cumulus 20.

The bottom line is – if you’re in the market for a comfortable daily neutral trainer with a versatile ride character and spacious interiors, the Cumulus 21 should be one of the shoes on your shopping list. For alternatives to the Cumulus, you can scroll down to the bottom of this review.

The amount of space inside the 21 is similar to the outgoing model but the upper feels better. The new mesh is softer, the lacing panel isn’t as stiff, and the additional mesh section on the Achilles dip makes the collar more comfortable. The same goes for the new tongue made with a softer material.

The lacing goes back to a soft round type (the Cumulus 20 had flat ones) that makes the cinching process more comfortable.

Under the foot is where you’ll notice the difference. The Cumulus 21 is firmer just underneath the foot but softer below.

Thus, the Cumulus 21 feels firmer when you’re walking or standing but delivers a softer ride during runs. We’ll get to the nuts and bolts in the following section.

This Cumulus delivers a cushioned ride experience without being overly squishy, and that’s what we like about it the most. The 21 adopts a midsole and outsole geometry which resembles the 2018 model except for two notable updates.

The removable footbed is now built using a smooth, compression-molded EVA foam instead of blown Ortholite foam. While the lasting below it is still foam, the new sockliner makes the top-layer firmer.

This is what we meant when we referred to the Cumulus 21’s firmer manners during walking or standing. The foot no longer sinks into the footbed as was the case on the 20. Instead, what you get is a more resilient underfoot character.

At the same time, Asics compensates with a softer midsole foam stack. The top layer of Flytefoam is identical to the 20 visually and otherwise; the bottom half is where the changes occur.

Instead of the firmer and fibrous Flytefoam, the Cumulus 21 uses a softer material with a smooth sidewall. This increase in softness isn’t perceptible until you run in the shoe.

The reason why we’re calling this out is because many people make their purchase decision on the shop floor. The level of step-in comfort is often a deciding factor.

Hence, it’s worth knowing that the Cumulus 21 feels different during a run than it does at standstill or walking speeds. The cushioning of the lower Flytefoam layer gets activated only when you’re loading weight at a cadence associated with running. 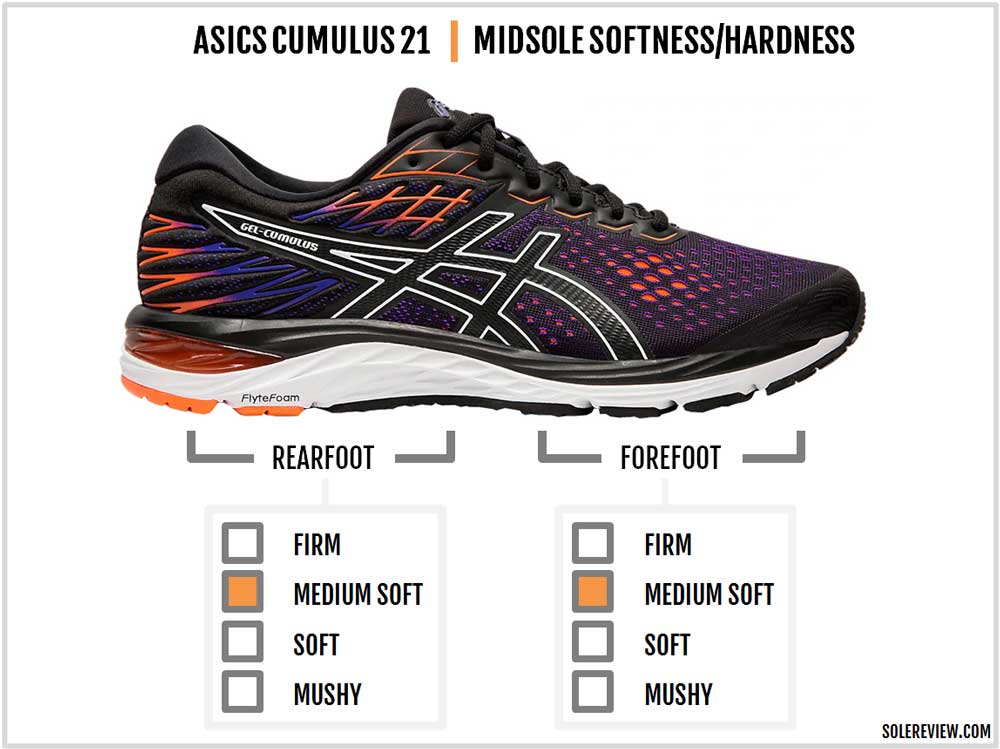 The softness bit isn’t overdone; there’s a bit of firmness which holds the midsole from getting into the squishy territory. Simply put, the level of cushioning feels very balanced – not too firm nor too soft.

The 10.4-ounce Cumulus isn’t heavy to begin with, and its balanced weight distribution makes it feel lighter. There’s no bottom-loaded heaviness at all. 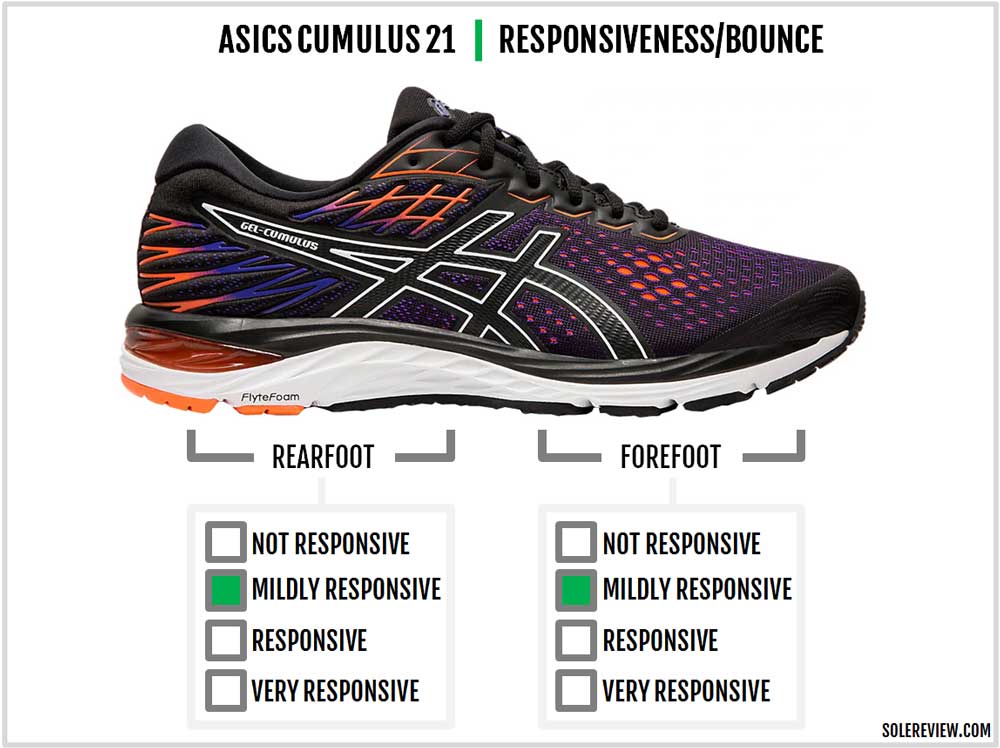 Though the Asics Flytefoam lacks the bouncy feel of Polyurethane or Pebax-based foams, the resilient foam stack is slightly responsive. It also helps that the removable insole is no longer the squishy blown foam.

Loading the rearfoot elicits a markedly neutral character – the sidewall on both sides is supportive so there’s no bias. The visible Gel and the foam densities are near-evenly matched. On the top, the firmer Flyetfoam (in black) adds a layer of stability. The forefoot no longer has a visible Gel window (the Cumulus 18 was the last to have it) and feels very planted during landings and transitions.

There’s no shank or awkward midfoot gaps on the blown rubber outsole, so the loading occurs smoothly. The ‘Guidance Line’ groove keeps the loading process centered through the gait cycle. The cushioning feel is consistent due to the continuous density of the Flytefoam stack.

The Cumulus 21 doesn’t get the new Guidance Line of either the Kayano or Nimbus 21 where the groove stops short of the forefoot. The transition groove cuts across the forefoot as it did on the 20. That said, the forefoot doesn’t feel lumpy due to the relative firmness of the midsole.

The outsole looks identical to the 20, and it almost is – except for the small ‘bridge’ joining the rubber lugs on inner/midfoot forefoot. It is much smaller than the 20 and makes the forefoot more flexible. 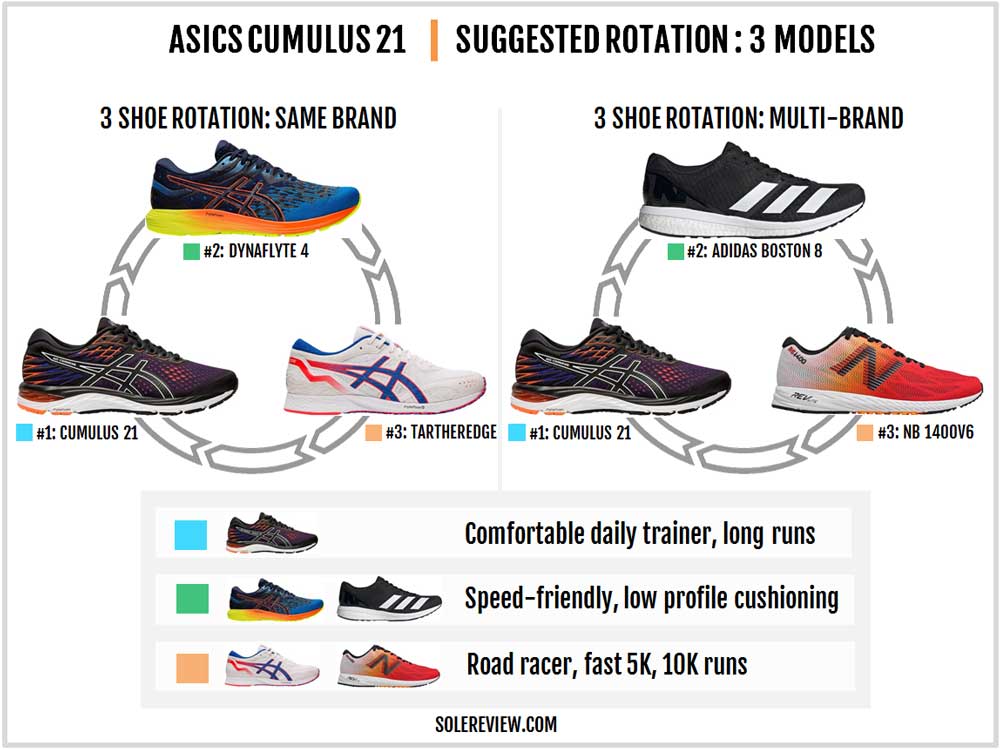 On the road, the Asics Cumulus 21 feels best suited for daily runs of speeds slower than 7 min/mile (5 min/km). Sure, you can go faster but that’s the time when you contemplate whether you were better off in, say, the Dynaflyte 4. If not the latter, the alternatives are the adidas Boston 8 or the New Balance 890V7.

The Asics Tartheredge or the New Balance 1400V6 (or preferably the Hanzo) are the shoes to buy for road races or fast track intervals.

The Cumulus works for long-distance runs too. The recently released GlideRide is also a cushioned option. It has a plated midsole with a rocker ride that rolls the foot forward. 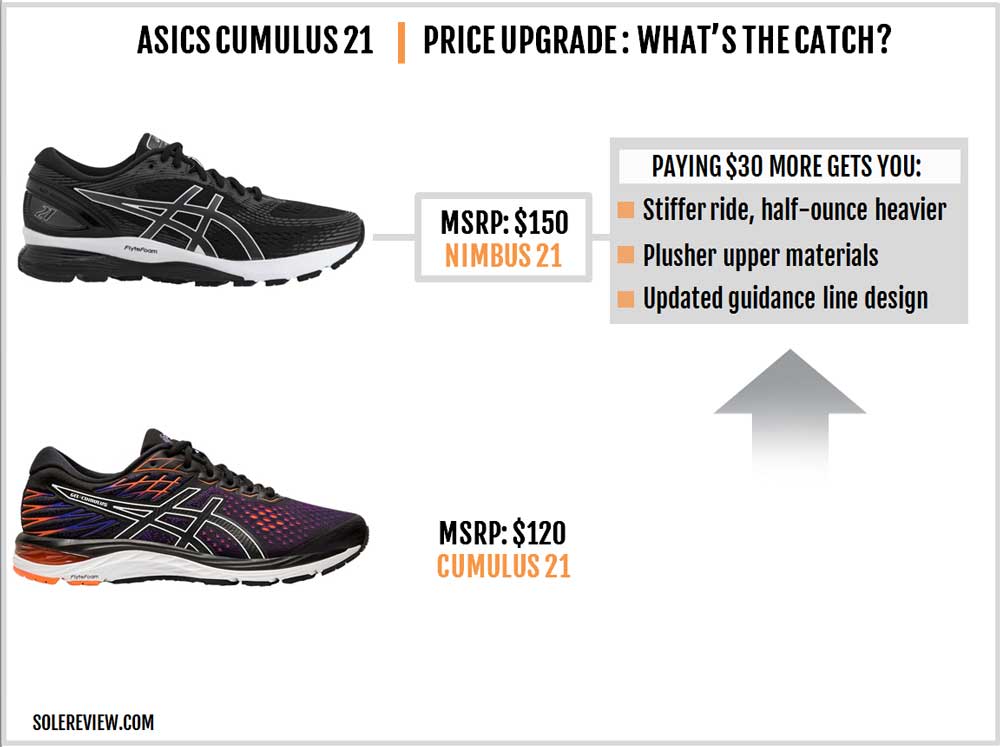 In many other reviews and guides, we’ve said that the Cumulus is a better choice than the more expensive Nimbus 21. (The 22 will be out shortly, but we’ll cross the bridge when it comes.)

And we still believe that – the Cumulus is a comfortable neutral running shoe which bests the Nimbus in many ways. The ride doesn’t feel as blocky as the Nimbus and shoe is $40 cheaper at full retail. The Nimbus 21 has a better upper than the Cumulus, but is it really worth the premium?

IS THE CUMULUS 21 DURABLE? 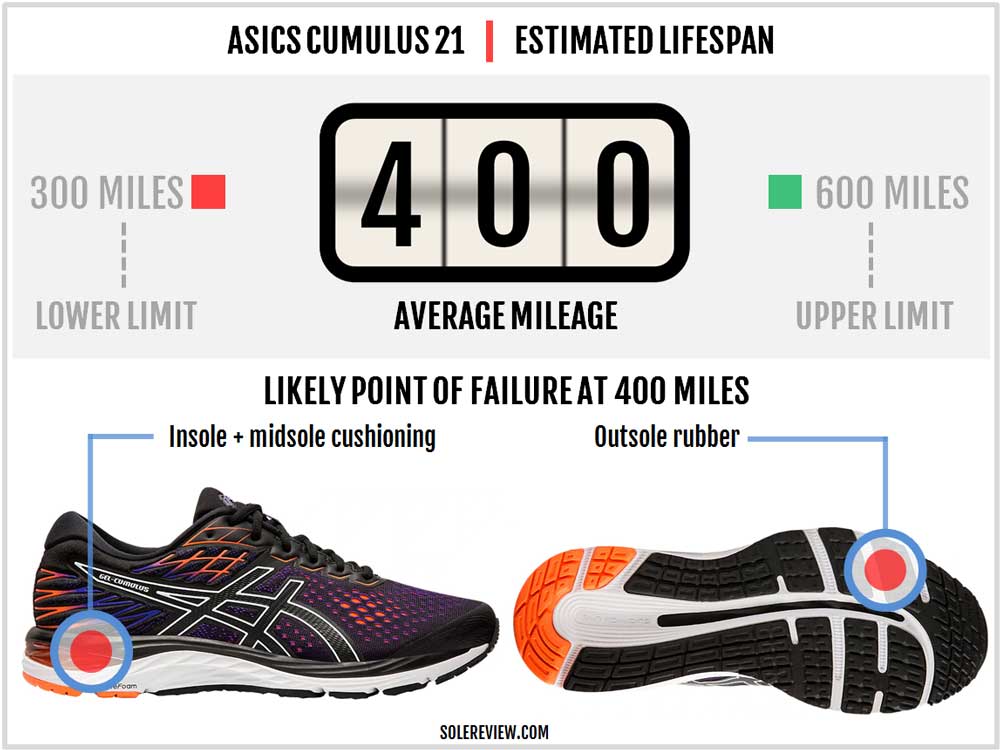 The Cumulus 21 will last as long as the previous model. In other words, a lifespan of around 400 miles is doable without a significant loss in functional performance.

Like any other running, will be a gradual wearing of parts such as the insole and the blown rubber outsole. 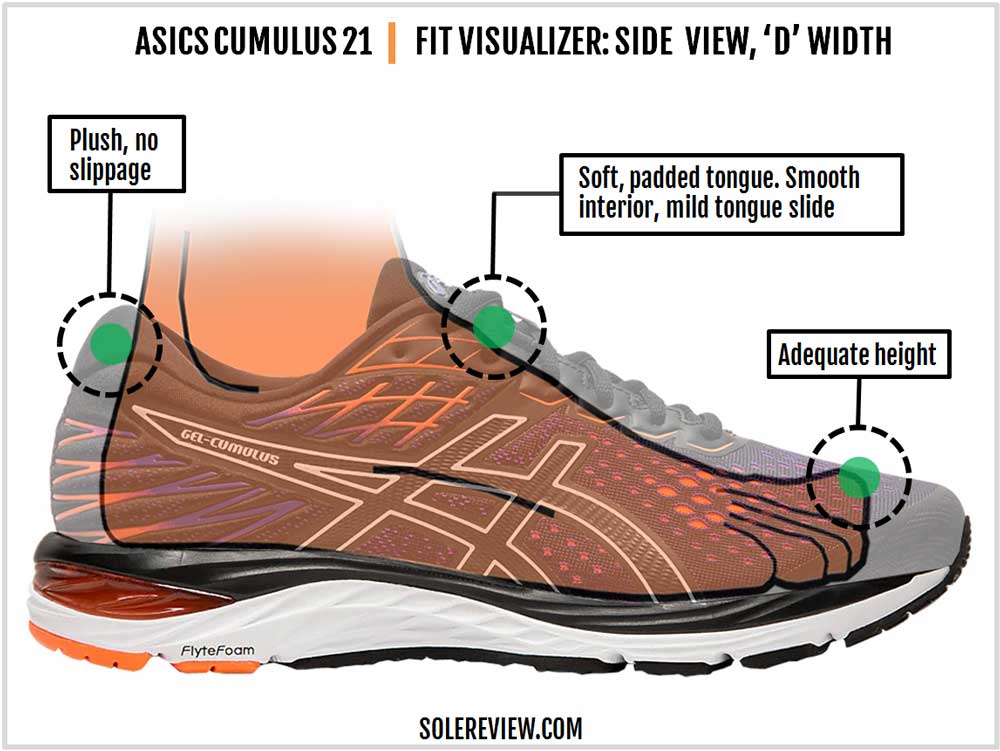 With its fused overlays, a sleeve-less tongue, and a non-stretchy mesh, the Cumulus 21’s upper is as traditional as they come.

An old-school upper is not a bad thing at all. A conventional upper design is more predictable than stretchy fits – as long as the brand gets the basic interior formula pat.

In the Cumulus’s case, Asics does get it right. The new mesh is soft, and the use of welded urethane layers translate into a smooth interior. The C-20’s flat laces have been swapped with a softer round kind that makes the cinching process more comfortable. 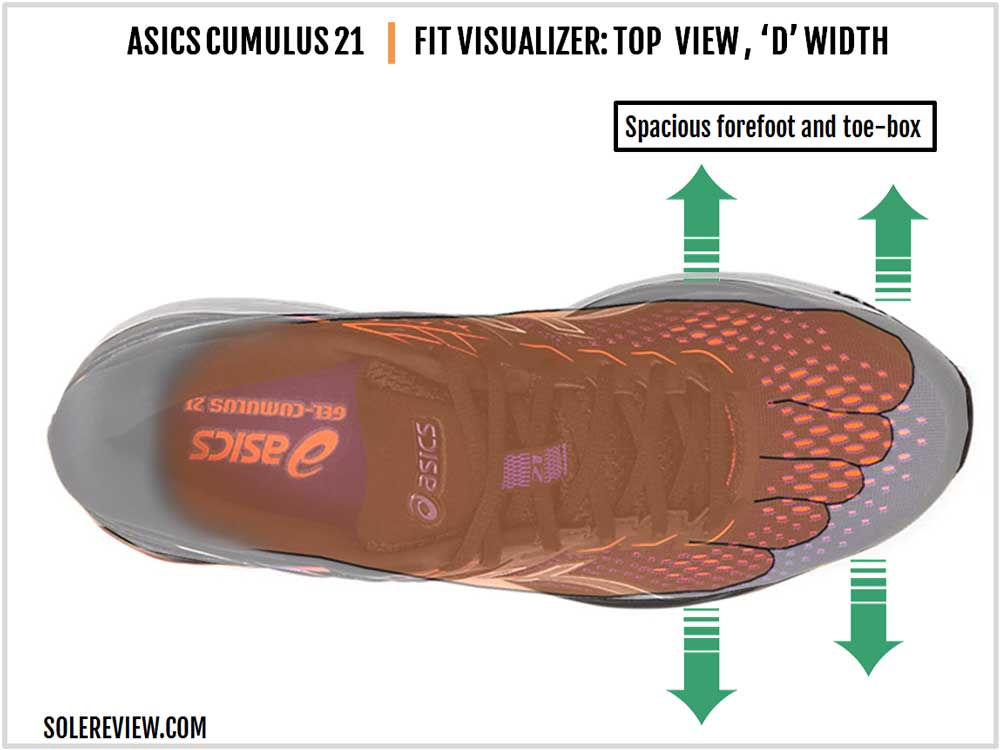 There’s plenty of room inside, and that applies to both the forefoot (sideways) and toe-box (vertical). The fit is true-to-size in the standard D width – there are optional 2E (wide) and 4E (extra wide) widths available.

While a sleeve-less interior leads to a mild tongue slide, it also keeps the insides ventilated. The new upper also gets a plush heel and tongue, an update made possible by the combination of a softer mesh and reworked Achilles dip.

There’s no slippage during runs; the padded heel securely locks the foot down. Reflectivity is scarce on the standard Cumulus – only the heel logo has it. But that shouldn’t be a concern, because Asics sells the ‘Lite-show’ version of the Cumulus. Which, as the name suggests, is loaded with reflective layering.

A waterproof Gore-Tex and winterized (different upper mesh, color scheme, and outsole) versions of the Cumulus 21 are also available. 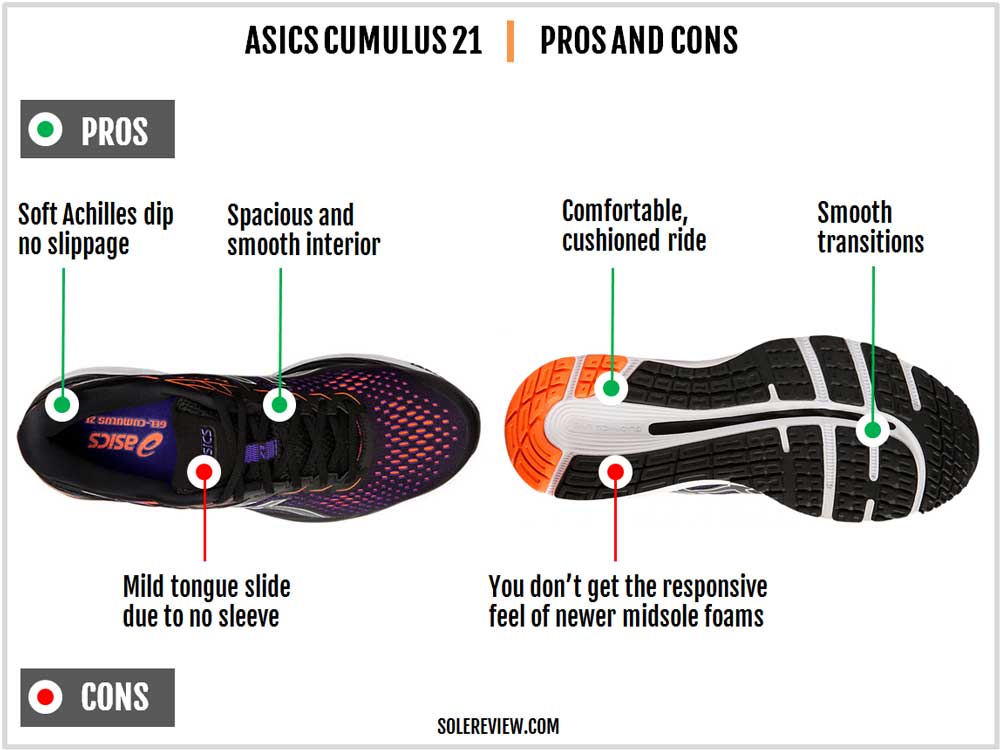 The Cumulus 21 isn’t a running shoe loaded with the latest bells and whistles. At the same time, you won’t hear bad things about the shoe no matter who you talk to.

The Cumulus has a please-all character – the midsole is cushioned with smooth transitions, and the upper is spacious and comfortable while holding the foot securely. The tongue and heel have a plush over-the-foot feel.

Sure, there’s a mild tongue slide. And the Flytefoam doesn’t feel as engaging as other lightweight foams.

Still, the Cumulus checks most of the boxes as a comfortable daily trainer that is versatile enough for most runs, and that suffices for most neutral shoe-seeking runners.

SHOES SIMILAR TO THE ASICS CUMULUS 21 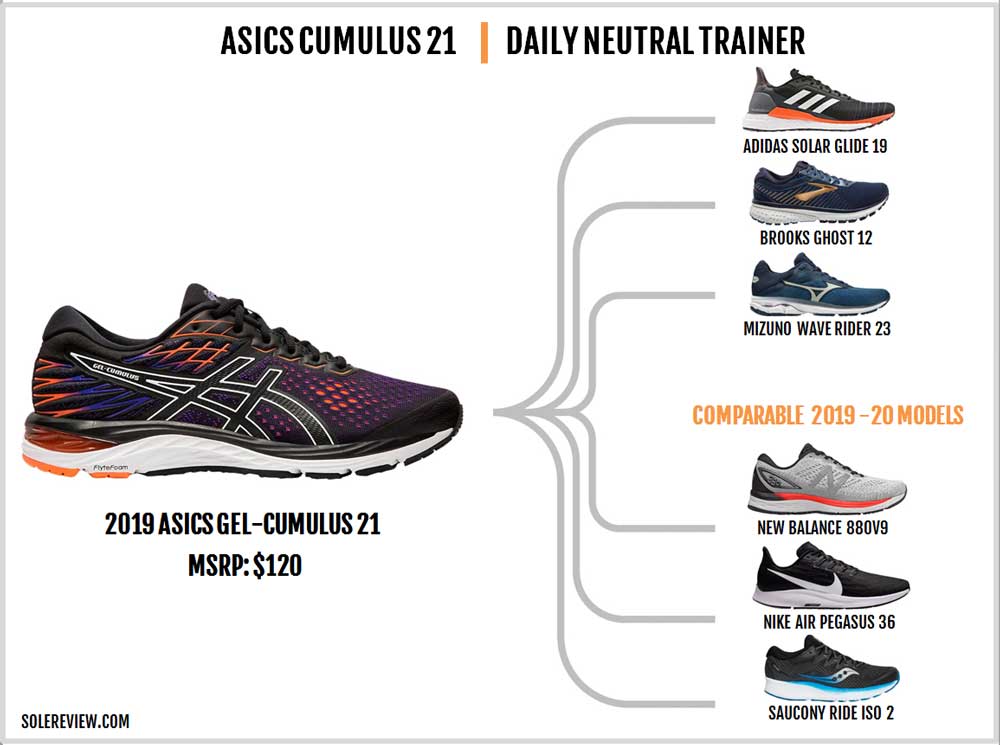 Before diving into the list of alternatives outside Asics, take a moment to consider the other Cumulus variants. If you want reflectivity, the Lite-Show model gives you that. Running in the rain? That’ll be the Cumulus 21 GTX for you, then. Need a warmer upper and beefed-up outsole? The Winterized model is designed precisely with that use-case in mind.

If the above options do not work for you, then read on. The adidas Solar Glide (and also the Drive) will give you a softer ride which is also immune to swings in temperature. The Reebok Forever Floatride Energy is also an excellent pick for $20 less. Here’s our full review of the running shoe of the year.

Our detailed take on the Nike Pegasus 36 and the Saucony Ride ISO 2 can be read here and here. They have been summed up as firm and mildly responsive running shoes which work better for faster paces than the Cumulus.

The Brooks Ghost 12 and the New Balance 880V9 are from a similar running shoe class as the Asics. That means that both use conventional foams and upper construction – a design choice that produces a cushioned yet supportive ride quality.

Lastly, if the snappy Wave plate of a Mizuno sounds appealing, then the Wave Rider 23 could be your running shoe.