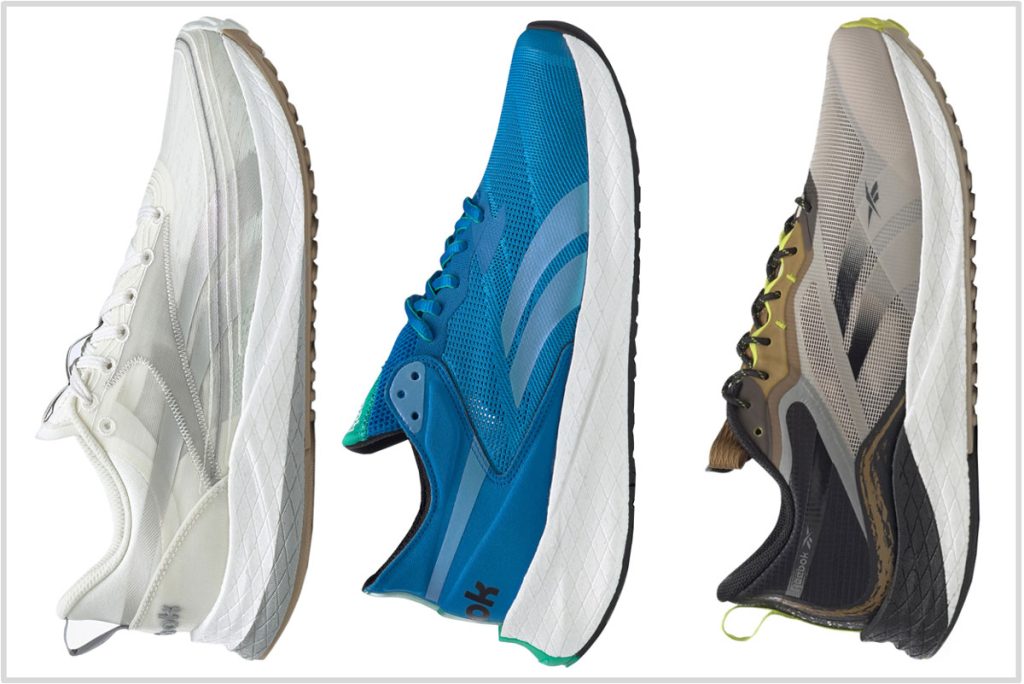 This article has been updated with current models for June 2022. The Reebok Floatride Run Fast 3 has been removed.

The Reebok brand changed hands last year, and the acquisition was completed in March this year.

The deal raises questions about Reebok’s future direction, and its running shoes in particular.

If a shoe giant like adidas failed to make Reebok work, then it seems obvious that the Authentic brand group would adopt a different strategy to make Reebok commercially successful.

At this time, it’s not known whether performance running shoes are an important part (or not) of the said strategy.

Reebok also replaced its terrible ‘Delta’ logo with the classic – and instantly recognizable – Vector stripes. The classic Reebok logo has a strong visual impact – enough to transform the external appearance of the line-up.

The now-discontinued Floatride Ultraknit was Reebok’s answer to the Ultraboost; we even compared the shoe with the Nike ZoomX Invincible. Then there was the excellent duo of the Run Fast Pro and Run Fast – the racer and speed trainer, respectively.

The Run Fast 3 and the superlative Run Fast Pro no longer seems to be available. That’s a shame.

Finally, there was the under-stated Floatride Energy – a $100 (now $110) running shoe that quickly won over a large population of runners. Its expanded Polyurethane midsole delivered resilient and durable cushioning that didn’t feel lazy. This ride character made the Floatride Energy the perfect everyday trainer that made other $100 running shoes look like rip-offs.

We have a soft spot in our heart for Reebok, and we hope that the Authentic brands group turns this brand around.

Reebok has so much potential.

Between the late eighties and early 2000s, Reebok used to be a powerful force in the athletic footwear industry. And we aren’t talking just about running shoes; Reebok was deep into categories like basketball, tennis, cross-training, aerobics, and lifestyle footwear.

The ’90s were the golden period for Nike and Reebok, an era of hype and innovation. Footwear tech like Reebok Pump, DMX, and Hexalite went head-to-head with different versions of Nike Air. The Air Jordans competed with signature Reebok Allen Iverson basketball shoes. And who can forget the Reebok Shaqnosis?

And it went far beyond loud marketing. At one point, Reebok used to make excellent running shoes. First released in 1993, Reebok’s excellent Aztrec runner was a worthy competitor to the Nike Pegasus. Ditto for the 1992 Pyro. Reebok also introduced single-piece EVA midsoles to the market with the 3D Opus, Electrolyte, and Areeba.

You get the idea – Reebok, like adidas and Nike, played an important part in shaping the sports footwear industry as we know it today. We hope that Reebok’s new owner builds on that foundation.

On a related note, Authentic brands seems to be on the right track with Brooks Brothers – a menswear brand (not Brooks running) that they acquired during the pandemic. They’ve hired Michael Bastion as the brand’s creative director, someone who’s highly regarded in the fashion industry.

Also, if you like reading about the history of the sports shoe industry or shoes in general, we recommend this guide on footwear literature. We have curated a list of books on this topic – collectively, these books cover the stories of the large brands and then some.

Given the circumstances, there’s not much to say about the current Reebok assortment. Most of it – including the Floatride Energy – are updated versions of what existed the year before. The Floatride Energy 4 has the same sole as the 3, and gets a $10 price bump.

The Floatride Energy X is Reebok’s spin on the Carbon-infused cushioned racer. We haven’t included it here because we haven’t tested the shoe yet.

There are a couple of Floatride Energy variants like the ‘Grow’ version that’s made partly of sustainable materials. The ‘adventure’ edition of the Floatride Energy is an outdoor-sey spin on the road model. However, it is strictly a ‘soft roader’ that’s suited only for easy-grade trails.

There are new models like the $80 Liquifect Spring (an Asics Gel me-too), but we prefer to leave them out of this guide for now. As our budget option, we recommend the $65 Energen Plus.

Before diving into the write-up, it is important to know the difference between the two versions of Reebok’s ‘Floatride’ foam. The lightweight Pebax foam is used on the more expensive models like the Run Fast and Pro.

The Pebax formulation makes the shoe lighter and softer as compared to the lower-priced models like the Floatride Energy 4 that use a heavier e-TPU foam.

Reebok has a lot of flab in its running shoe assortment, so here’s our curated pick of four Reebok models. We’ve prefixed each shoe with its use-case so that it’s easier to find what you’re looking for.

The Floatride Energy is going through a lull, and that’s understandable considering the recent sale of the Reebok brand. The 4th edition is here, but it’s merely an upper-only update. That means the ride quality is the same as the Floatride Energy 3.

In other words, powering the midsole cushioning is a full-length stack of Floatride tech – an expanded Polyurethane foam that has built its reputation on other shoes like the adidas Ultraboost and Saucony Triumph.

However, Reebok’s version of E-TPU is firmer, and that means that the relatively low-profile midsole is a happy meeting place for many performance attributes.

The blend of cushioning, mild responsiveness, and smooth transitions make the shoe extremely versatile; use it as your daily trainer or long-distance shoe.

Just like the first three iterations, the FE4’s snug upper fits a bit long. The asymmetrical/skewed lacing opens up room inside the forefoot. The price goes up by $10, so if you can find the V3 at a bargain, get those instead.

This is not your do-it-all trail running shoe. It’s merely a more robust version of the road model, and that means design elements like the thicker upper layering add a higher level of protection for a $10 up-charge.

It’s not all that different from how Asics design its GT-2000 trail shoe. Which is, reinforce the upper while making the overall color scheme dirt-friendly.

Besides the reinforced toe-box, there are other outdoor-friendly components. To be specific, we’d like to call out the durable quick-drain mesh and thicker tongue along with the round, hiking-type laces.

There’s no difference between the midsole and outsole of the road vs. adventure models, so the ride behavior is identical. Its design limits make the Floatride Energy adventure good for mild trails that do not comprise difficult terrain. 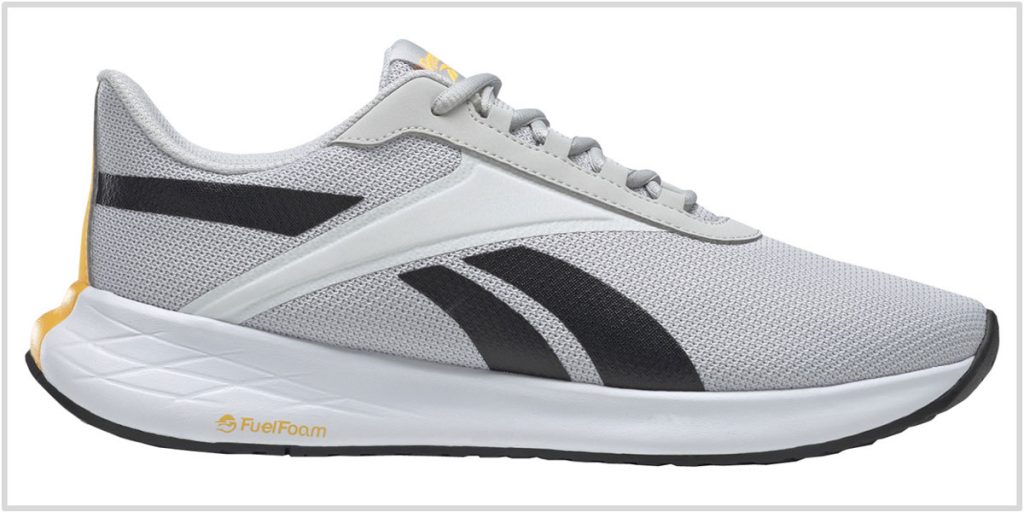 Though this $65 shoe is very basic, it qualifies as a proper running shoe. A mono mesh shell makes up most of the narrow-fitting upper, the tongue included. The Reebok logos give the upper the support and cosmetic detail it needs.

Unlike the more expensive Floatride Energy 4, the Energen Plus uses standard EVA foam (aka the Fuel Foam) midsole to deliver firm and stable cushioning.

Some step-in softness is available in the shape of the die-cut Ortholite insole, but the rest of the midsole has a flat ride character.

Despite its entry-level pricing, the shoe gets a full rubber outsole that delivers satisfactory traction and durability.

Till the summer of last year, the Floatride Energy was the only Reebok running shoe with a full-length Floatride (e-TPU) midsole.

The Floatride Energy Symmetros amends that situation. Like the FE-4, it has a Floatride midsole but in a higher-volume avatar. There’s more of the resilient foam under the foot, thus making the Symmetros’s ride cushier.

That said, the Symmetros is a very different shoe than the FE-4. The thicker stack makes it softer but also gives it a carefree character; one that feels at home during long and easy runs. The transitions are smooth due to the pronounced heel bevel.

The dual-zone outsole – which is harder in the rear and softer under the forefoot – provides sufficient levels of traction.

The upper is OK. There was no need to make the heel collar with stitched edges – that just increases the risk of Achilles rubbing. Like the FE4, the lacing begins far away from the front, so the fit runs a bit long.