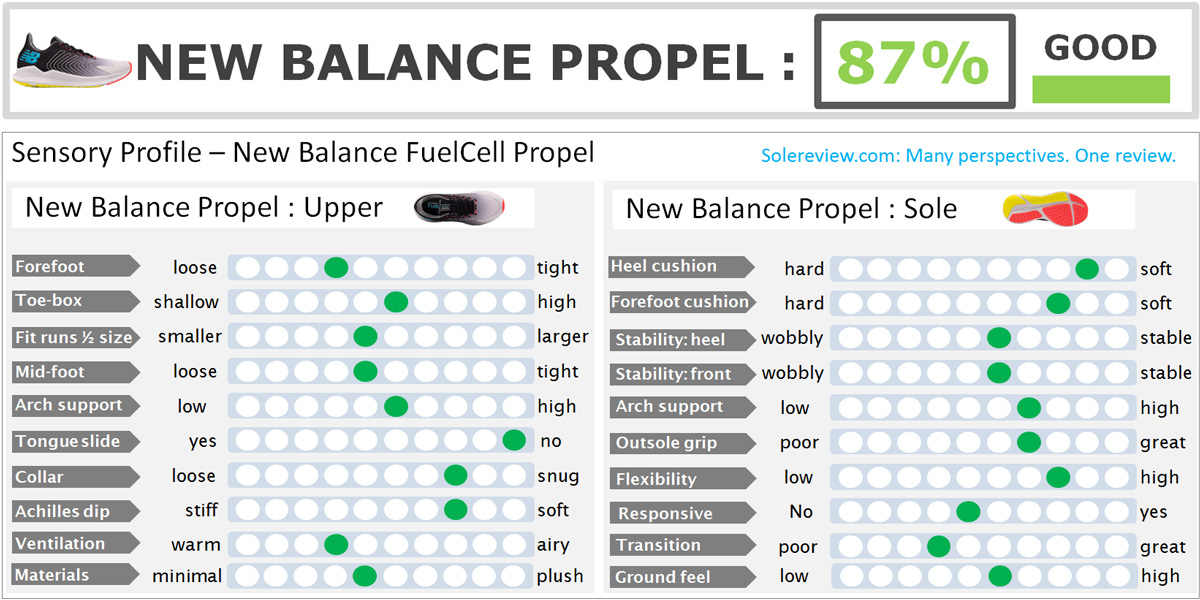 There aren’t many daily trainers with a soft ride and a roomy upper, so the FuelCell Propel is a much-needed addition to that sparsely populated niche.
Soft comfortable ride, flared midsole is supportive, value for money, spacious upper
The very soft ride limits usage to easy runs, the toe-bumper is a potential irritant, missing heel-lock eyelet 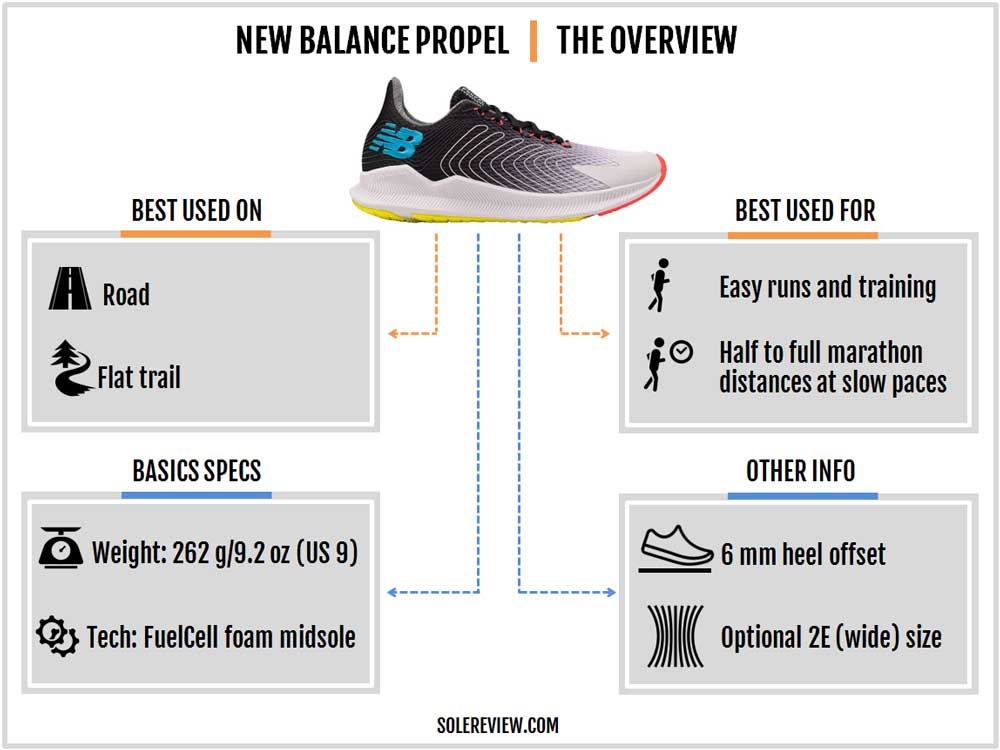 Over 500 new running shoe models are released annually, and not every product gets the attention it deserves.

Shoes usually achieve heady success when a strong marketing push, distribution, and sustained word-of-mouth feedback come together. For a lot of popular shoes – think the Nike Pegasus or the Brooks Ghost – a strong legacy is also a factor influencing the purchase.

Some praise-worthy shoes do not get the marketing spotlight but garner plenty of positive organic feedback. Things might be slow in the beginning, but the shoe slowly gains traction simply because people say good things about it.

The New Balance FuelCell Propel is one of those ‘under the radar’ running shoes which also happens to be great value for its $110 retail price.

This isn’t to say that the Propel wasn’t marketed well by New Balance. Yet, you’d agree that the FuelCell Rebel hogged the limelight, and the Propel was relegated to an ‘Oh, by the way, here’s the…’ status.

So what is the difference between the two?

We’ll refrain from diving into the construction minutiae here. That said, a couple of points will help you better understand the differences between the two.

The FuelCell Rebel targets forefoot and midfoot strikers, whereas the Propel doesn’t discriminate. Two, the Propel has a much wider upper over a softer midsole. You can go rearfoot-striking on the Rebel, but that’s not where it performs best.

In short, the Propel is a cushioned daily trainer for the easy runs, whereas the tighter-fitting Rebel has a wider repertoire of acts, faster runs included.

The Propel’s outsole and midsole geometry ensure an even spread of cushioning and traction.

This is vastly different from the FuelCell Rebel’s design which favors forward landings; the Propel has a wide outsole footprint throughout. The forefoot and heel midsole has an outward flare, and there’s also a cushioning groove creasing the sidewall.

Thus, regardless of how you land, the Propel has you covered – and quite literally so. The outsole is full ground-contact, which means that there’s always a strip of rubber available for landings and transitions.

And boy, does the Propel’s outsole grip.

Besides functioning cohesively with the midsole, the thin outsole also provides great traction. The small lugs bite confidently over the road while also creating a smooth transition zone. This is particularly true of the forefoot which uses a soft and tacky rubber compound. 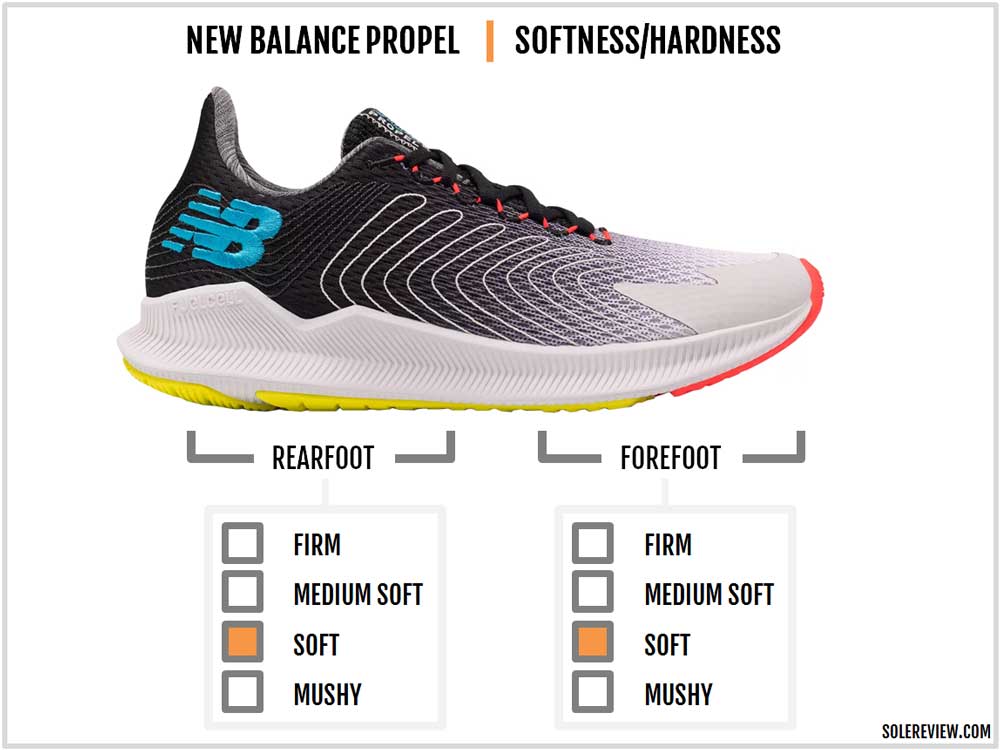 Unlike what the name suggests, the FuelCell Propel is not a shoe for fast runs. This happens to be one of the softest running shoes on the market today, the kind which is a better fit for easy daily runs than speed-work.

We’re not quite sure what the FuelCell Propel’s midsole is exactly made of. It feels like EVA foam but has more life and resilience – meaning it compresses easily but doesn’t feel mushy. 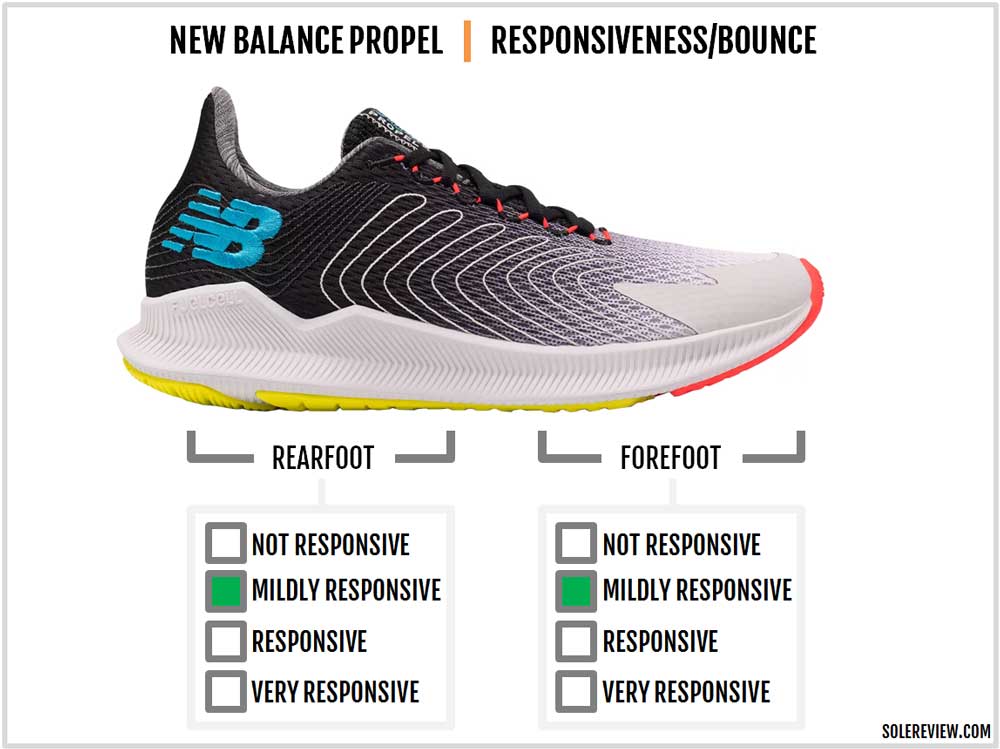 The ride is a tad responsive but not in a Boost or ZoomX kind of a way. One manner of describing it would be as a thinner and softer version of the original Hoka Clifton. In other words, the softness isn’t a sink-in kind yet lacks the depth of maximally-cushioned running shoes.

The said characteristics make the FuelCell Propel an extremely comfortable shoe to run in. This is remarkable considering the thin insole is not blown foam, and the lasting below it is made of textile. And yet, you won’t find the shoe lacking in step-in comfort.

The softness of the midsole makes running fast miles hard. And this isn’t specific to the Propel; overly soft shoes generally make for poor pacers. While exceptions exist, the Propel isn’t one of them.

With a soft midsole, one lacks a firm, assuring foundation from where to push off. Also, the midsole softness and the very flexible forefoot makes the transitions laggy when compared to firmer shoes such as the 890.

Just to be clear, these aren’t negative traits. You should know what the Propel is, and who is it meant for. It’s an excellent daily trainer for easy runs, but don’t expect it to be a versatile running shoe capable of speed miles.

As long as you respect its performance boundaries, the Propel makes your runs very enjoyable. Even though there’s plenty of foam and rubber, the 9-ounce weight means that you aren’t carrying a lot of weight. The Propel feels like a much lighter shoe.

The ride is extremely smooth. Though the inherent property of the foam makes it so, factors such as the transition groove help too. The groove which runs down the outsole center guides the loading during the gait cycle. The exaggerated flare of the midsole adds stability, and so do the raised sidewalls which cups the rear and midfoot.

Though you can use the Propel for long runs, we’ll advise you to buy the Fresh Foam 1080V9 instead for marathons and such. The 1080’s deep cushioning does a better job at reducing fatigue and also delivers a superior turnover due to its thick and stable midsole.

The 1080V9 is also a wiser choice if you’re a heavy runner. Under slow paces, the Propel might not have enough midsole for a heavy runner and can potentially bottom out. You can also browse from the alternatives listed at the end of this review. 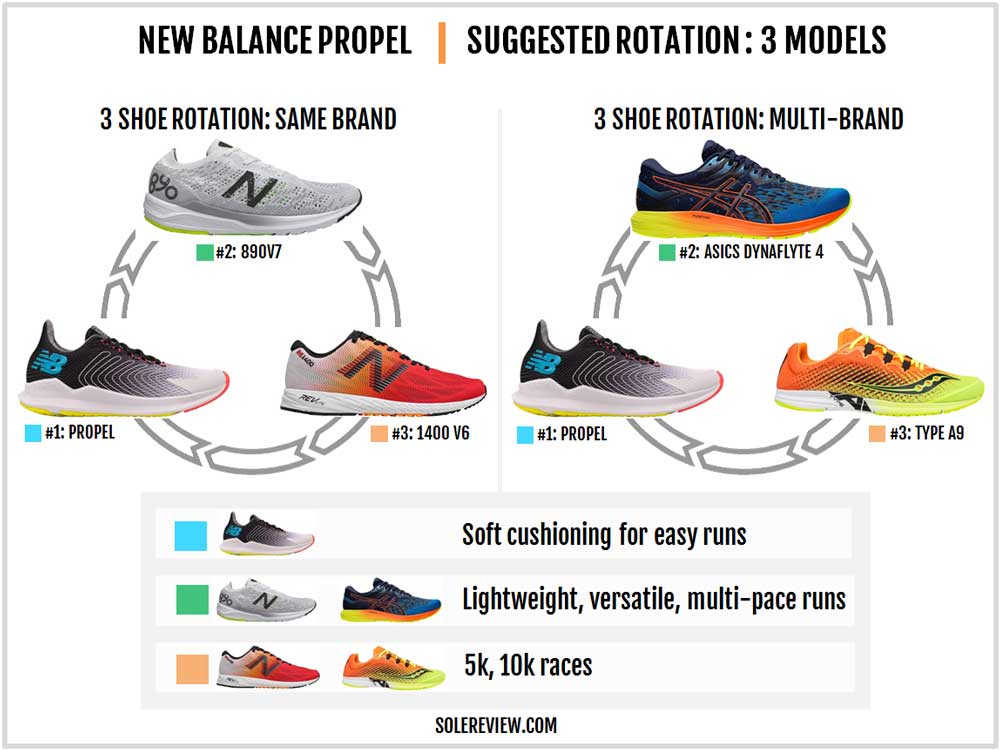 If you sticking to the New Balance brand, curating a rotation is pretty easy. Go buy the firm-riding New Balance 890V7 for faster tempo runs. We no longer see the Hanzo SV2 listed on New Balance’s website, so the evergreen 1400V6 is our racing shoe pick.

The Saucony TypeA9 is also an under-rated road racer which compares with the 1400V6.

There’s the 5-ounce FuelCell 5280 of course, but its $200 price is anything but lightweight. But then, it could have been worse – the Reebok Floatride Run Fast Pro’s $250 price will make your eyes smart.

You can substitute the 890 with a Mizuno Wave Shadow 3 or the Asics DynaFlyte 4. But unless you have a problem with the 890’s insole or upper fit, we don’t see merit in doing so. 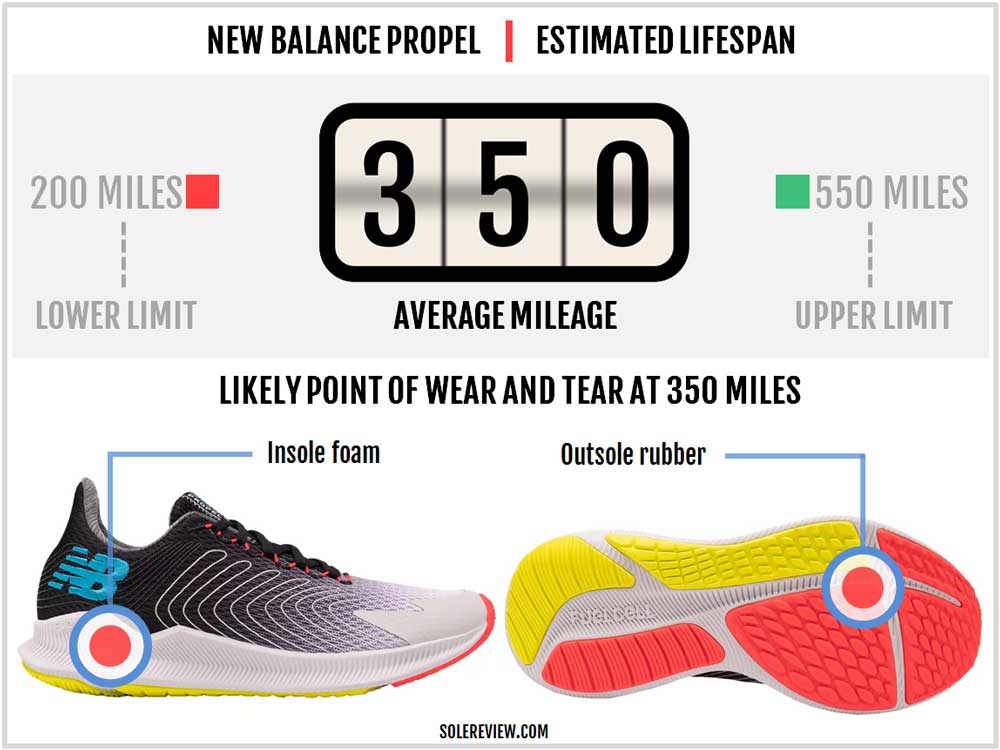 There’s nothing on the upper or midsole which suggests a lower lifespan. The outsole fully covers the midsole and flexes along with the soft midsole for an even spread of wear and tear.

There have been no negative reports – so far – about the durability of the new midsole compound. We hope it stays that way.

Some expected wear and tear will take place on the outsole, be it the forefoot or lateral heel edge. The FuelCell midsole has enough cushioning even if the thin insole goes flat after a couple of hundred miles. 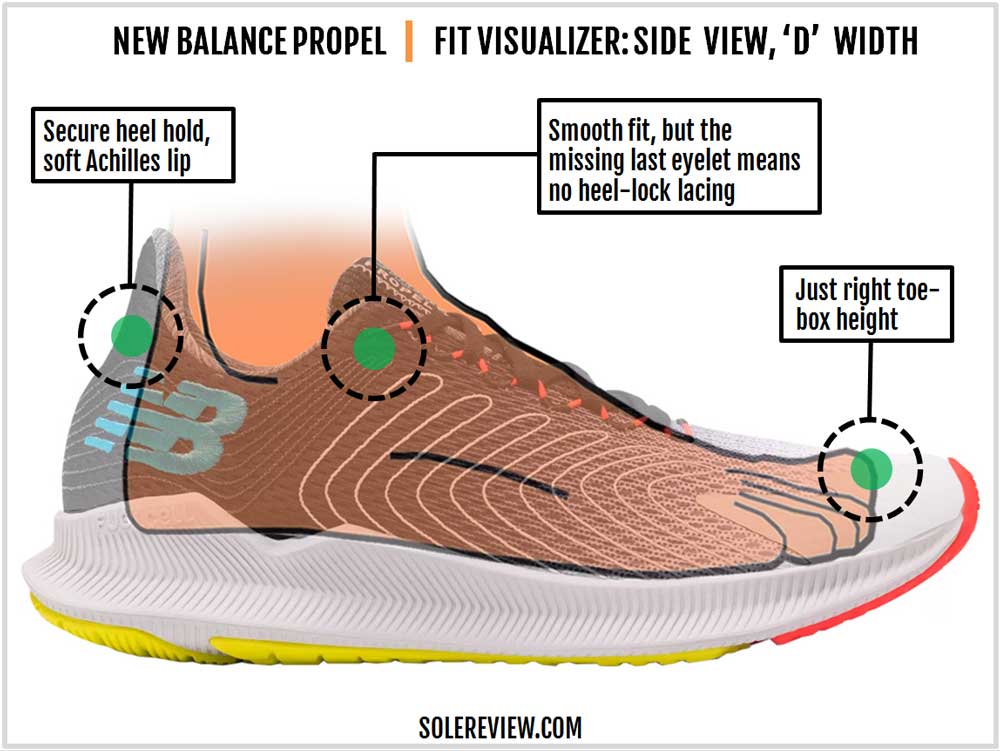 Just like the soft midsole, the Propel’s upper has a very relaxed demeanor with a true-to-size fit. Though a 2E (wide) size is optional, we doubt that you’ll exercise that choice – unless you have very wide feet.

The outer upper isn’t made of engineered mesh but a one-piece spacer fabric with a fused toe-cap and embroidery. New Balance’s fancy way of describing the stitching is ‘trace fiber’. Truth be told, that sounds way cooler than ‘stitched reinforcement’.

If you’re wondering where have you seen it before, the Saucony Liberty ISO 2 also has a similar stitching detail. The difference is that Propel relies on the stitching as the primary upper structure whereas the Liberty ISO uses it as decoration.

The embroidery on the Propel’s upper is superficial. You won’t see the stitching on the inside of the shoe, and as a result, the interiors feel smooth over the foot.

The way we see it, stitched lines are a clever way of adding structure and design depth without a weight penalty. It also makes the shoe look less ‘synthetic’.

The mesh has a closed structure without a lot of wide vents, so this is a good running shoe to carry into late Fall or early winter when paired with warm socks.

The heel has the pointy Achilles lip which is now part of New Balance’s design language but is spared the Origami-esque construction seen on the 1080V9 and the Beacon V2.

Instead, the Propel sticks to the tried-and-tested combination of a soft lining and just-right levels of foam padding. The material and level of heel lock-down feel like a lot like the original 1500V1 – no slippage, yet comfortable. 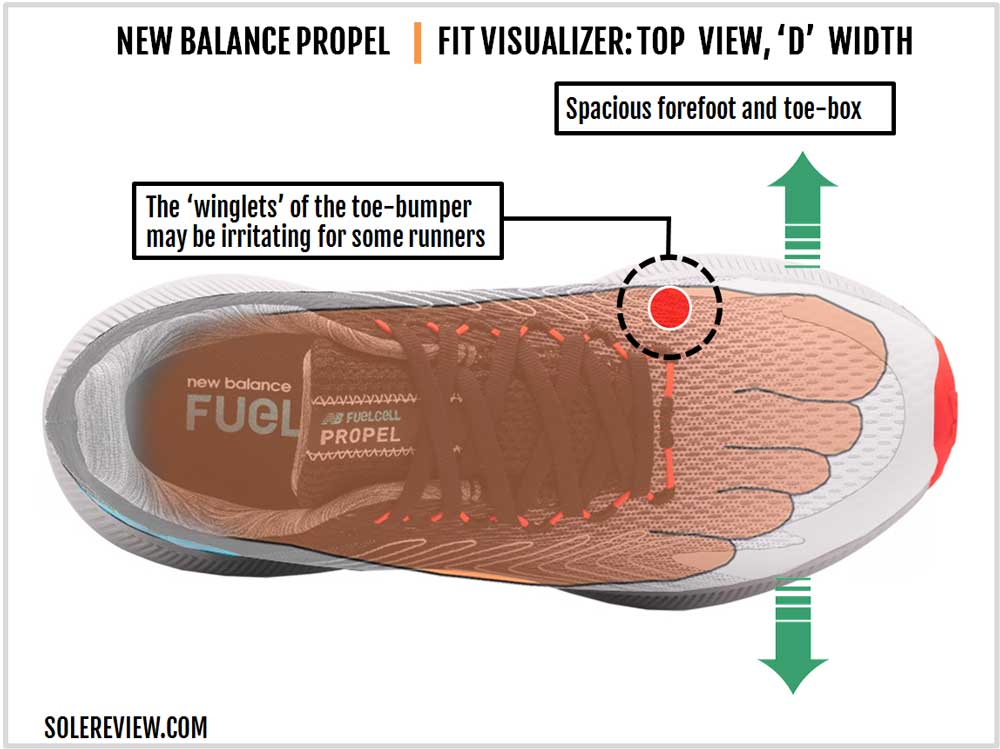 We must add, though, that while the heel lock-down will be adequate for most runners, the Propel lacks a last heel-lock eyelet. This means that you won’t be able to further improve the heel fit of the Propel. So take your time trying it on first to see whether the heel fit works for you.

The tongue hits the sweet spot between length and thickness. A sleeve means that the tongue stays in place during a run, and the soft semi-stretch laces are easy to cinch.

The synthetic toe-bumper is the only overlay. While it’s a thin fused kind, the bumper has these ‘wings’ extending over the forefoot. We suspect that this was a styling decision to make the pointy end line up with the embroidery.

It takes some time to get used to the ‘wings’ folding over the forefoot when it flexes. In our opinion, this design is completely gratuitous. 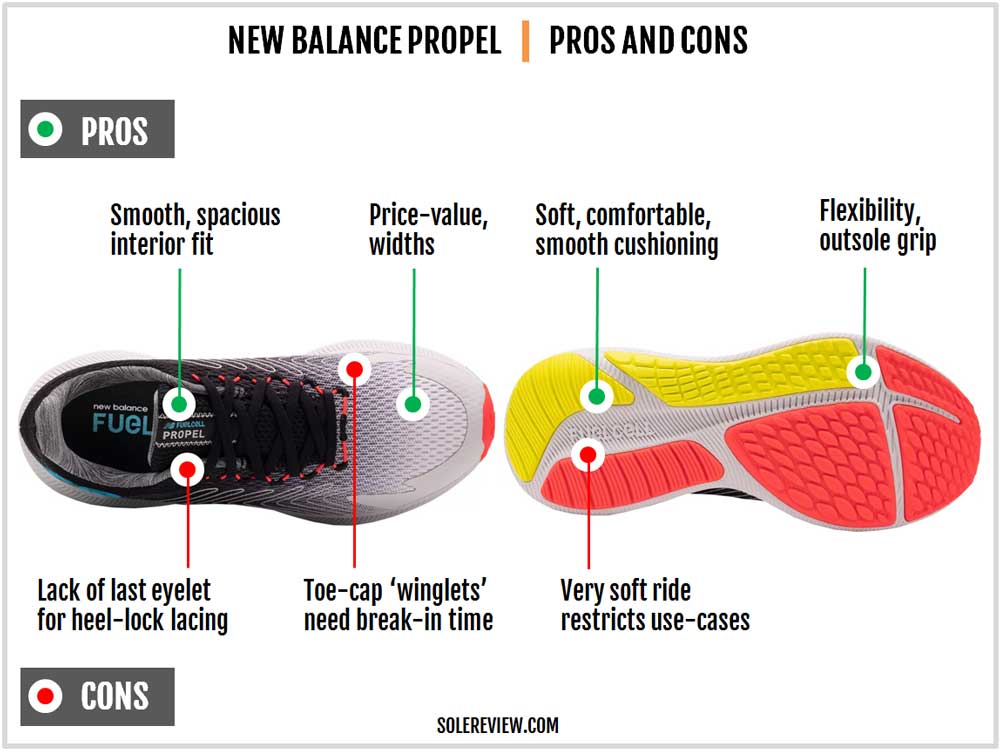 For the most part, the New Balance Propel shines as a daily trainer which offers a lot of value for its price.

The soft midsole makes daily runs very comfortable – as long as they take place at easier paces. The midsole base is very wide so the softness does not come at the cost of stability.

The segmented outsole has excellent grip and works together with the midsole without adding stiffness. At the same time, the soft and flexible ride means that the Propel isn’t the right shoe for faster runs. Also, if you’re a heavy individual running at slower paces, the soft midsole can potentially bottom out.

The toe-bumper could have been designed better. The extended ‘wings’ of the synthetic toe-cap could potentially prove to be a mild annoyance for some. 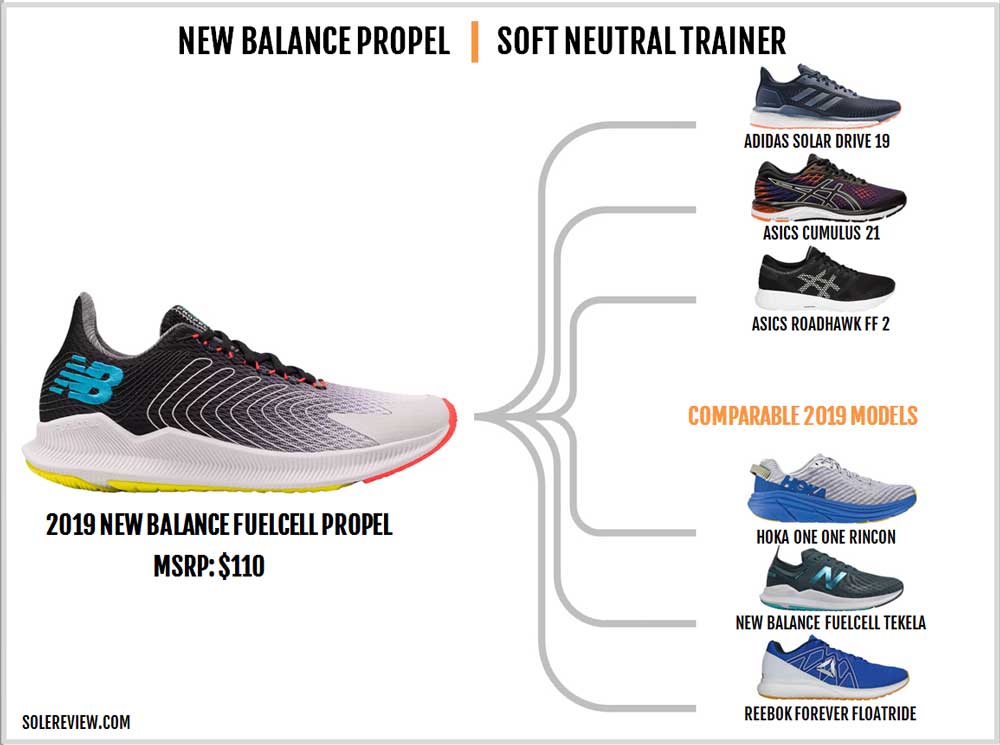 The FuelCell Propel’s $110 retail price and soft ride places it in a different shoe class than regular neutral trainers. For that reason, we have excluded the usual line-up (Pegasus, Ghost et.al) here.

The New Balance FuelCell Tekela is the closest match, because both the shoes share the same midsole. And what’s the difference? The Tekela’s no-sew upper is inspired by the namesake New Balance football shoe.

The Asics Cumulus 21 also gives you a soft, comfortable ride. And so does the adidas Solar Drive 19 – but of a firmer, more responsive kind. The Reebok Forever Floatride Energy offers a similar ride as the core ingredient of adidas Boost and the Floatride Energy foams are the same e-TPU.

You won’t get the same level of ride softness in the Asics Roadhawk FF2. But it is a competent value trainer which you can also do faster runs in. Finally, the Rincon delivers a just-right blend of Hoka softness without the historical pricy-ness.

It’s also worth considering the Nike Odyssey React. Its firmer ride is nowhere as soft as the Propel but you get a much lighter shoe with greater versatility.