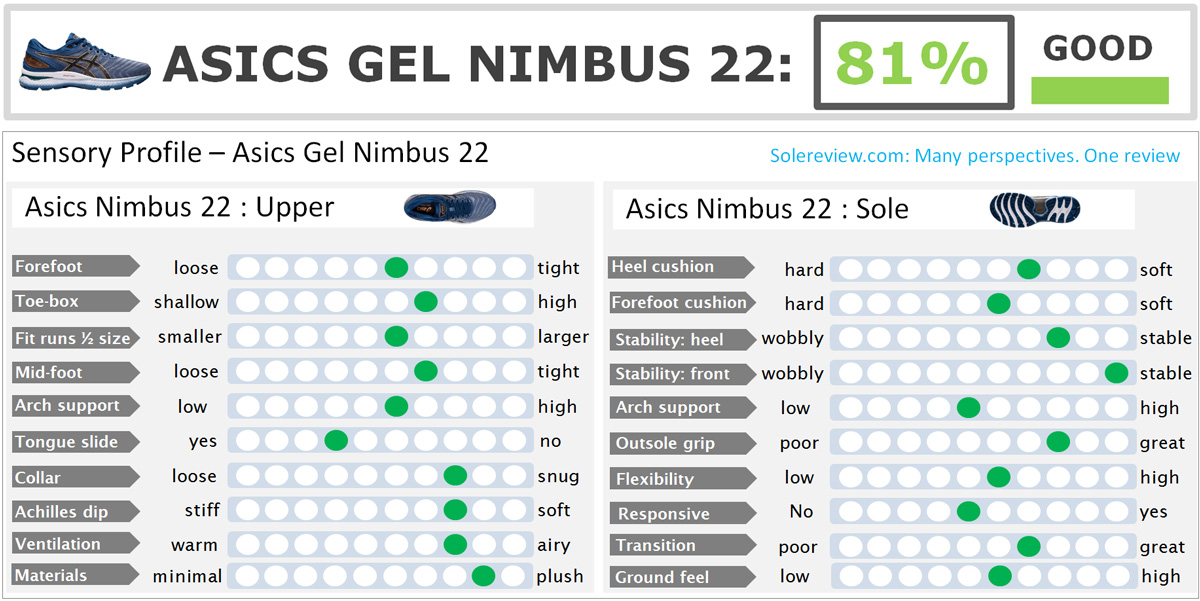 Outsole: Carbon rubber in the rear, blown rubber under the forefoot.

On the outside, the Nimbus looks new. On the inside, the ride and fit character is all too familiar.
Cushioned, smooth and stable ride, breathable, multiple widths, plush upper, just-right fit
Heavy, ordinary ride experience, mild tongue slide 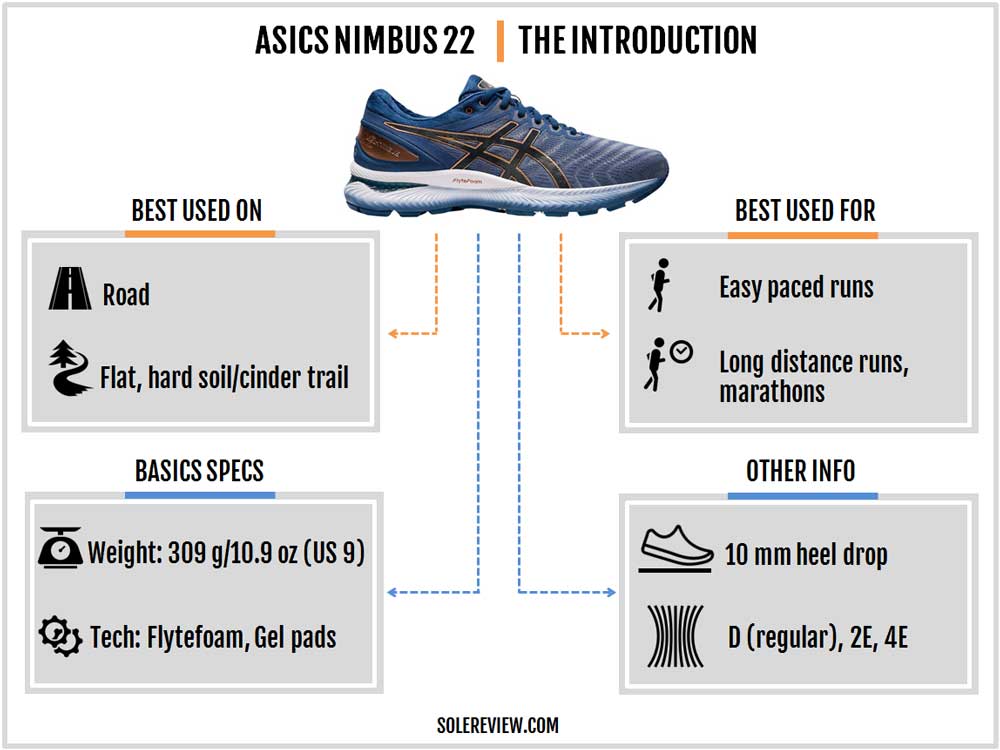 Of course, the Nimbus 22 is an improvement over the 21.

As it should be.

Since the Nimbus 21 was shockingly boring and stiff, the only way from there was up. If you need reminding of the N-21’s mediocrity, please go read the review.

And in what way is the 22 a superior running shoe? The midsole has a softer, smooth, and comfortable ride; something that the Nimbus 21 should have had to begin with.

But the question is – can you teach an old dog new tricks?

Agreed, the exterior appearance is nothing like the older Nimbus models. And yet, the new Nimbus has a fit and ride experience that feels all too familiar.

In essence, the 22 is a comfortable, albeit heavy, running shoe that works for daily training and long-distance runs at unrushed paces.

On the other hand, if you’re expecting a novel cushioning experience, this Asics shoe doesn’t cut it. You’re better served by one of the other shoes listed at the bottom of this review.

Besides being softer than the stiff Nimbus 21, the new midsole is also smoother due to the updated construction.

The Flytefoam midsole continues to be dual-density, but the stack is now inverted. The smaller wedge that was in the lower part of the 21’s midsole is relocated to the top, so there’s a continuous layer of softer Flytefoam underneath.

The visible Gel pad also wraps around the heel instead of being wedged just on the lateral side. As a result, the Nimbus 22’s ride is smoother and more neutral than the 21.

The 22’s midsole also has a unique sidewall design that flares out under the heel for improved stability.

There have been a few stray instances when the Nimbus was a very soft shoe. In particular, versions 17 and 15 come to mind.

That being said, a soft Nimbus has been the exception and not the norm. The Nimbus has historically had a medium-soft ride; the Brooks Glycerin is another example of such a running shoe. The Nimbus – even the 22 – isn’t in the same league of softness as the adidas Boost or even the Saucony Triumph. 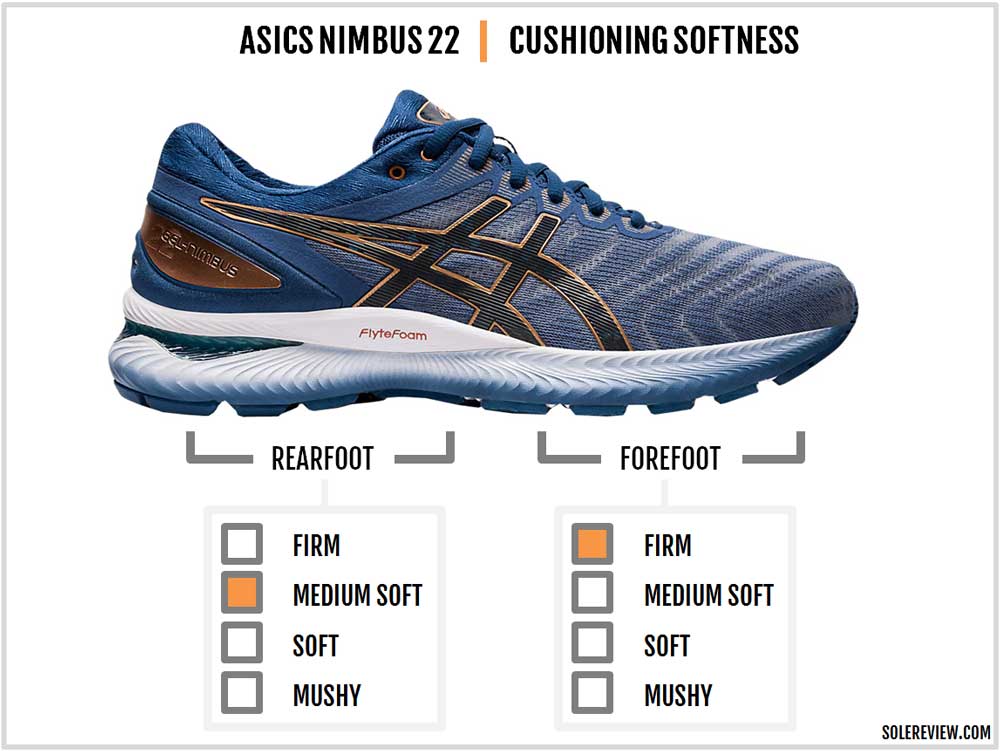 In this review, the word ‘softer’ is used relative to the Nimbus 21. This applies even for the women’s Nimbus that features a 2 mm higher heel stack and a 13 mm drop.

The men’s Nimbus, in comparison, has a 10 mm drop resulting from a front and rear thickness of 15 mm and 25 mm.

By the way, Asics now has a name for it. “+3 midsole technology”, in an obvious reference to the 3 mm difference in offset.

The brand new midsole and outsole is a dramatic shift from the legacy design language. The midsole sidewalls, in particular, have futuristic-looking ripples along with a visible Gel unit that goes around the heel.

This is new for Asics; except for shoes like the Quantum 360, the Gel pads have usually been restricted to the visible side. The midsole also flares outwards to create a wider base under the heel and forefoot.

With these updates, the Nimbus produces a markedly neutral ride experience. The midsole cushioning is balanced and doesn’t favor one side over another. The wider foundation helps increase stability too.

The midsole has a smoother feel. As pointed out earlier in the review, the smaller Flytefoam is now on the top of the main midsole – the Nimbus 21 had it the other way around. This creates a smoother transition zone from the rear and midfoot to the forefoot. It helps that the Flytefoam is softer this year.

It’s interesting how the Flytefoam compound has evolved in the last few years. The original version had a fibrous texture with a noticeable degree of firmness.

The current Flytefoam formula appears to have little in common with the first generation cushioning tech – it feels like a smoother variant of EVA foam. With that comes a ride quality that is predictable and somewhat bland.

Sure, you get plenty of cushioning throughout the length of the midsole. The heel has a nice cushiony feel to it, and the forefoot feels adequately padded. The outsole is made of blown rubber with plenty of flex grooves so forefoot strikers will find landings and transitions comfortable.

One of the important updates made to the 22 is the removal of the ‘Guidance Line’ transition groove. This had been a regular fixture in most Asics outsoles for as long as we can remember. Shoes like the Cumulus 21 (and upcoming 22 as well) still have it.

The Guidance line helped center the weight during the gait cycle. It worked on most shoes – as long as the midsole wasn’t too soft and the edges of the outsole not sharp.

In cases where the midsole foam was overly soft, the outsole lugs applied pressure from underneath. That made the forefoot feel lumpy during landings and push-offs.

The Nimbus 21 let go of the Guidance Line under the forefoot; the 22 removes the Guidance line in its entirety. The new outsole ditches the center groove altogether and introduces (more) flex grooves that enhance forefoot flexibility. There’s a bit of the 33 series in the new outsole design but that could be nothing more than a coincidence. 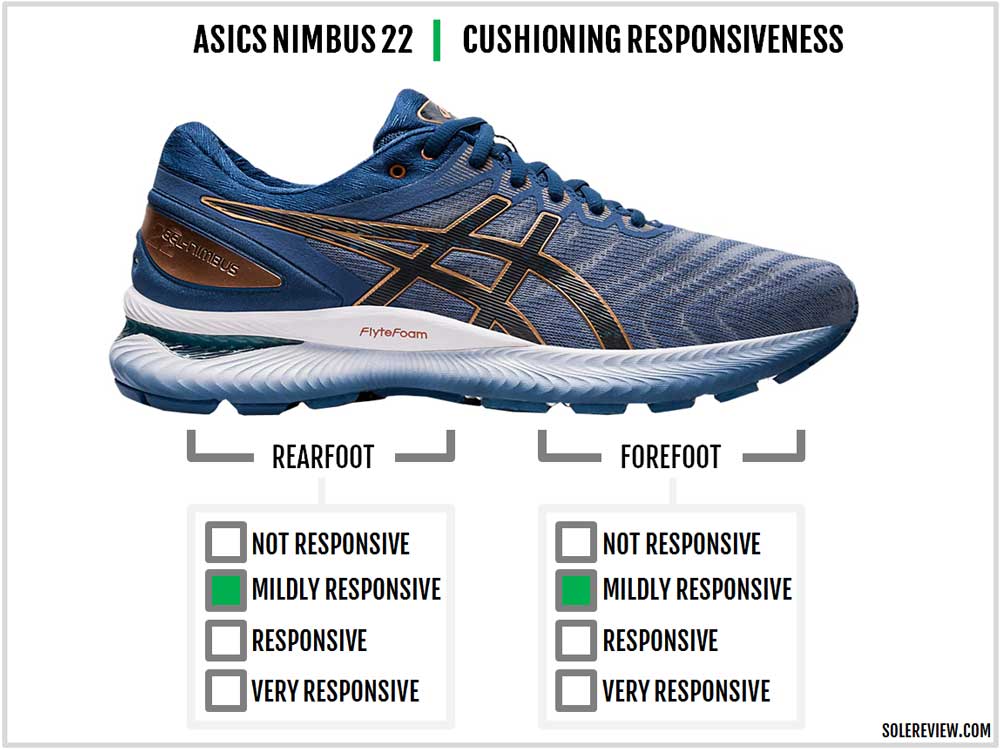 Flytefoam isn’t the most responsive of midsoles when compared to the newer foam tech.

The midsole has a little more life than the pre-Flytefoam Asics models, but that’s all there is to it. The compression-molded insole and foam lasting are also made of EVA, so they offer the standard (and expected) layer of step-in cushioning.

Make no mistake; even with the improvements, the Nimbus still has an old-school cushioning delivery system. It has neither the deep cushioning of the New Balance 1080V10, the lightness of the Hoka Clifton, nor the responsiveness of the Saucony Triumph 17.

At 11-ounces, the Nimbus is heavy. Given the specs, it’s very hard to coax hardcore performance out of this premium neutral trainer. It is best used as a comfortable daily trainer or un-timed long-distance runs.

As long as your running sweet spot is below 7 min/mile or under 5 min/km, the Nimbus will serve you well for many miles. As we said before, it’s the Asics versions of the Brooks Glycerin 17.

And that’s perfectly fine – running shoes in this neutral cushioning class seldom have the versatility of lighter trainers. 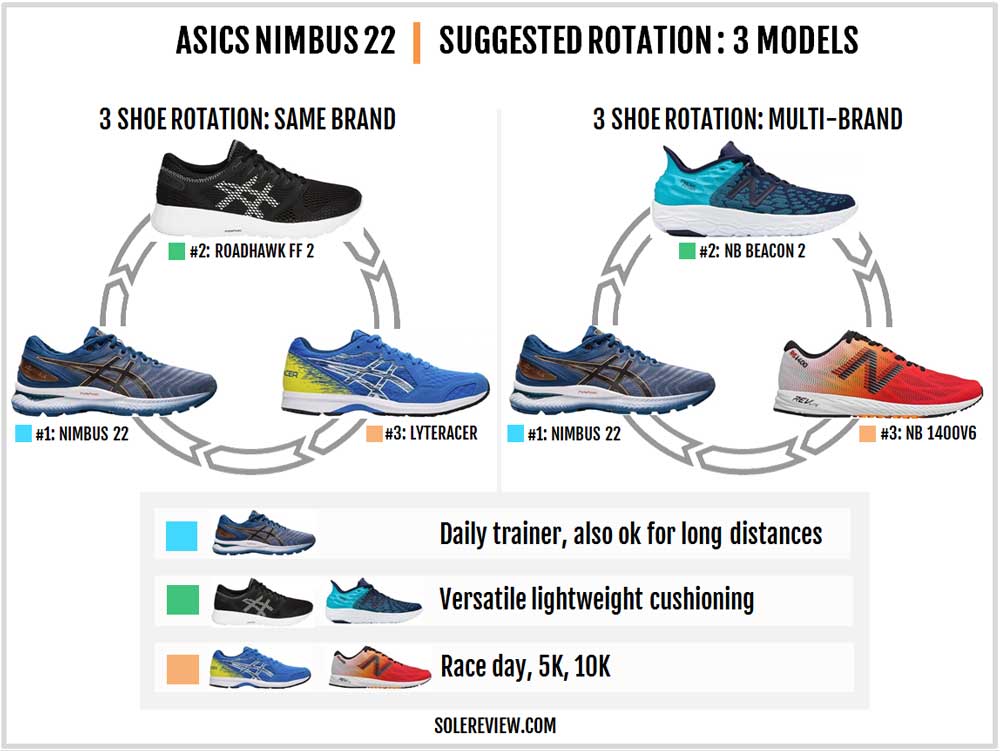 For this reason, it’s best to use the Nimbus together with a couple of rotational running shoes. The Asics Roadhawk FF 2 could be your lighter cushioned trainer for slightly higher speeds. However, we view the New Balance Beacon 2 to be a superior shoe in this class.

IS THE ASICS NIMBUS 22 DURABLE? 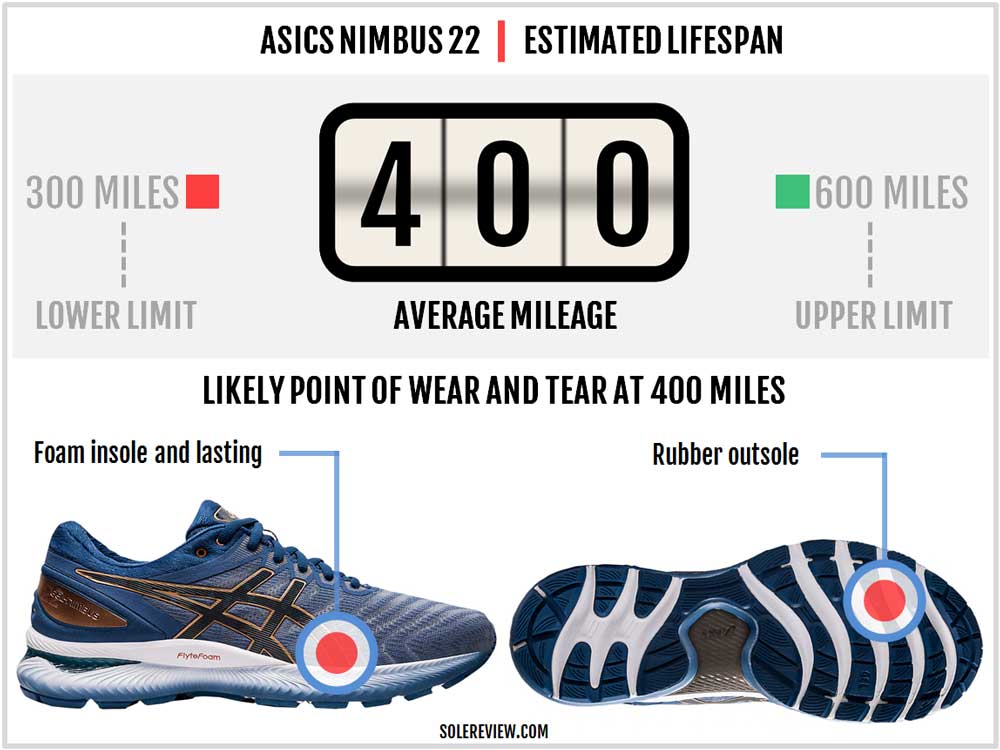 At 11-ounces, the Nimbus 22 is a sturdy running shoe that doesn’t cut corners on the build quality. The upper has a lot of layering without any friction spots, and the outsole is overlaid with a generous amount of rubber.

And that’s not it. For this year, the outsole is split into a greater number of pieces. With the lugs mounted separately on the softer midsole, they partially telescope into the midsole instead of taking the entire hit of the foot-strike.

All things considered, the Nimbus will run 400 miles or more. 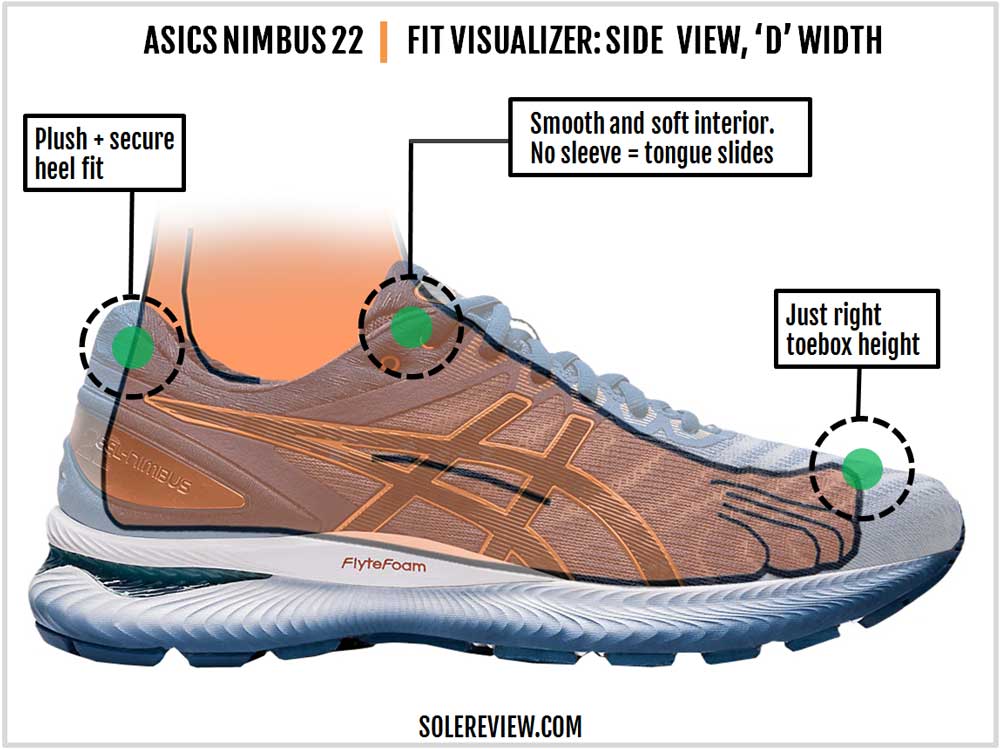 Most of the materials used on the upper are brand new for the Nimbus 22, but only the redesigned heel merits a discussion. All the versions we had reviewed so far had an external heel clip clutching the heel.

The Nimbus 22 uses an internal heel counter instead. As a result, the heel grip ends up secure but without the relatively aggressive hold of the clip-based Nimbus uppers. And as always, the collar delivers a plush wrap around the foot.

There’s only a single trade-off resulting from the redesigned heel, and that’s the reflectivity. Now you just get three small trims over the heel. In the earlier models, the ‘windows’ of the plastic clip housed much larger reflective panels. (Related: Best reflective running shoes) 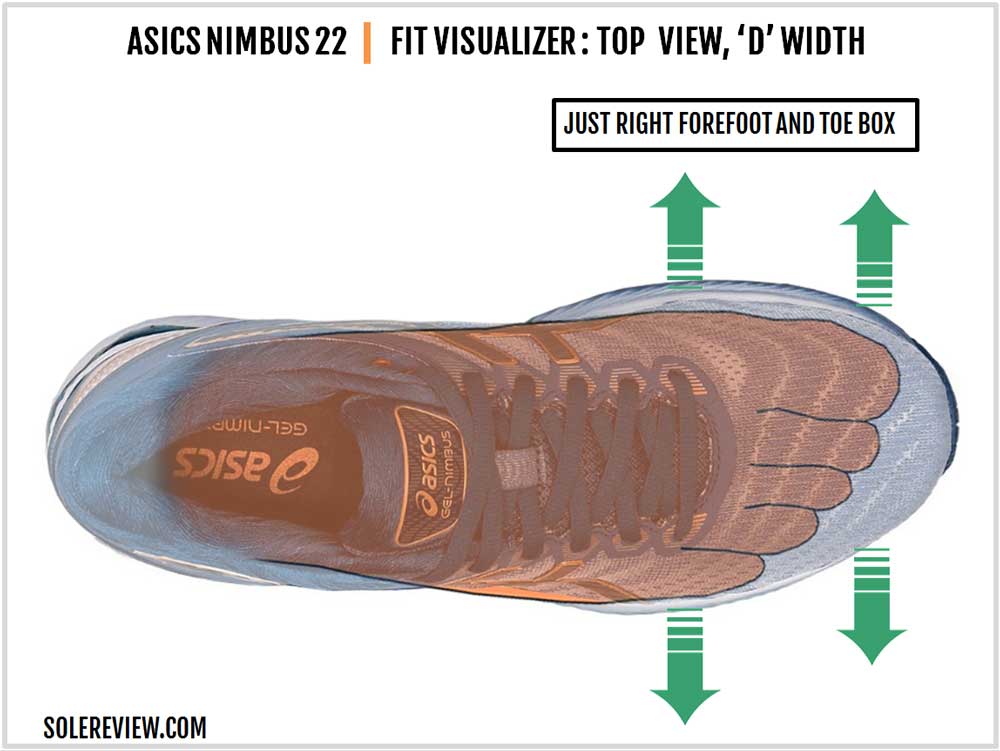 The rest of the interior is standard Asics fare. The forefoot and toe-box use a breathable mesh to create a fit that feels just right. There’s sufficient room to splay the foot and move your toes around.

For wider feet, Asics sells an optional 2E (wide) and 4E (extra wide) for this model. The upper fits true to size.

There’s no sleeve holding the tongue. The latter slides towards the outer side during runs, and that’s a well-known part of the Asics experience.

Other than that, the tongue is soft, comfortable, and doesn’t let the lacing pressure through. The rounded laces have a soft hand feel which is par for a $150 shoe.

The Nimbus 22 provides a healthy dose of running shoe traditionalism. Whether one sees that as good or bad remains a deeply personal choice. The dual-density stack of Flytefoam has all the cushioning required for long-distance runs – as long as the Nimbus isn’t pushed at higher speeds.

There’s plenty of support from the midsole. The new midsole edges flare to create a wider base, and the rearfoot Gel is equally distributed. The updated Flytefoam stack and the higher count of flex grooves make the ride both smooth and flexible.

The upper is comfortable, fits well, and has multiple widths – an area that the Nimbus has always been good at. The interior still lacks a gusset, and that leads to tongue slide.

We’d point out the boring ride character and the 11-ounce weight as two of Nimbus 22’s ‘needs-improvement’ areas.

SHOES SIMILAR TO THE ASICS NIMBUS 22 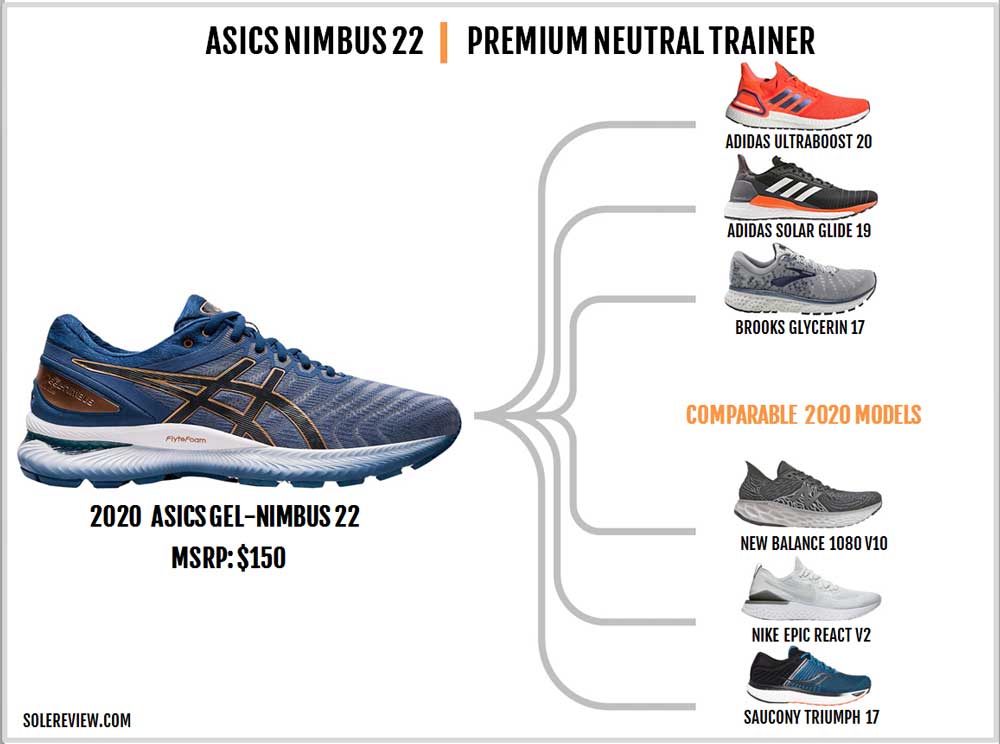 Within the premium neutral cushioning segment, the Asics Nimbus 22 and Brooks Glycerin 17 are two of a kind. Both do not have a super plush or soft ride; the midsole is medium-soft at best. The 11-ounce weight isn’t the only thing the shoes share; their plush and true-to-size uppers are equally comfortable.

The Saucony Triumph 17 is another solid long-distance trainer with a difference. This is the shoe to buy if you prefer a springy ride. The e-TPU foam delivers a lot of cushioning that is also immune to temperature swings.

For those who like their running shoes with ‘deep’ and responsive cushioning, there’s the New Balance 1080V10. The reformulated Fresh Foam midsole is a lot more bouncy than the V9, and there’s gobs of high-mileage comfort packed within.

The adidas UltraBoost 20 and SolarGlide 19 give you the tried-and-tested Boost foam and Continental rubber combination. In functional terms, that translates into a soft and responsive cushioning with a durable outsole.

There is only one lightweight model on this list, and that’s the Nike Epic React Flyknit 2.

The React foam isn’t as springy as Pebax or e-TPU, yet the ride quality works for long-distance runs without the burden of weight. The 8.4-ounce helps build speed without sacrificing comfort. The Nike React Infinity Run is a React-based shoe with more support, so that’s an alternative as well. 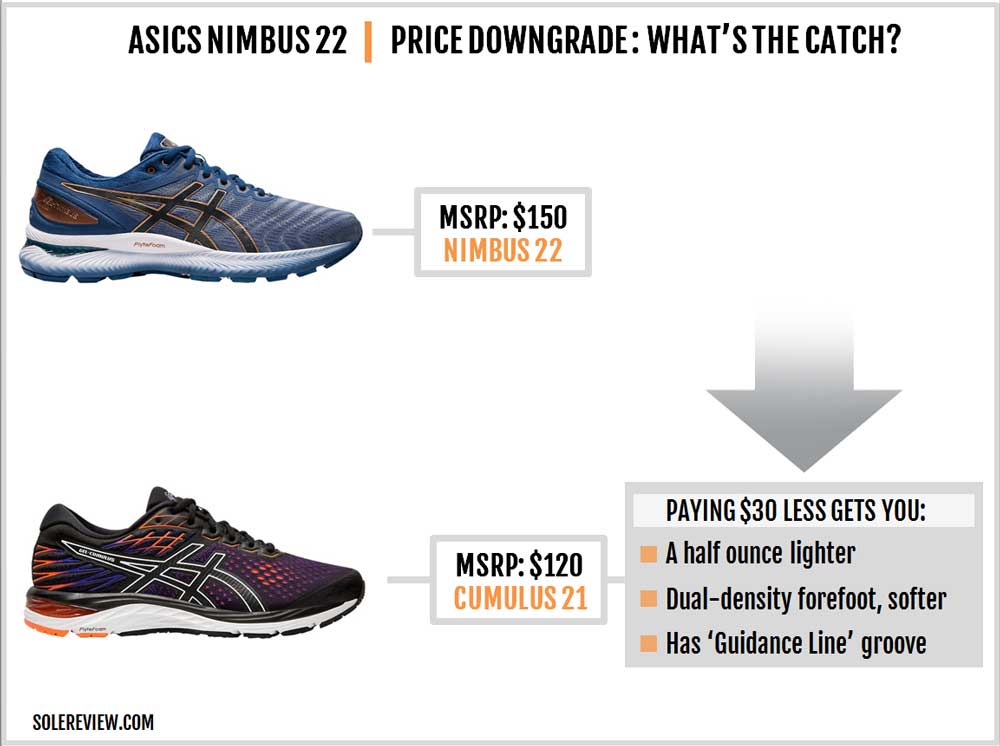 Surprisingly, the Cumulus 21 is the softer of the two. That’s thanks to the lower-density and slimmer midsole that is easier to deform than the sturdier Nimbus 22. As a added bonus the C-21 is half an ounce lighter too.

The upper is more basic and lacks the soft interior feel of the pricier Nimbus. That said, the Cumulus is an excellent daily trainer that is also capable enough for high-mileage runs.

For what it’s worth, the less expensive Asics shoe also has something that the Nimbus no longer features – the ‘Guidance line’ groove.

Though the Nimbus Lite is currently not in the market, that shoe should make for an interesting (future) comparison.